Hoping to find some long-forgotten words or ancient melodies

So we were at the new Motor City Fur[ry] Con hotel about 6 pm, later than we've ever gotten to this con. There was an enormous line. It was not for registration, but for the hospitality suite; sponsors --- and most people at MCFC get sponsorships --- had the option of getting dinner there. The registration line was upstairs. Past a checkpoint to show your badges, but we said we were there to get our badges and they waved us through, so, maybe that checkpoint needed some straightening out. And then we had a minor fiasco as they couldn't find

bunny_hugger's registration. She filled out a new registration, fretting about whether she could get a refund when she got her original con registration out of e-mail. It turns out she hadn't, which is weird. We knew we had missed the deadline to submit panels, which is why we had nothing to do besides attend, but failing to register was never imagined.

Still, the convention had a bunch of things we forgot. For example, I forgot to being any of my badges, so that all I had to identify me was my con badge. In accord with modern con tradition, the badge had my name in small print in dark letters on a medium-dark background. I also forgot the slippers that go along with my red panda kigurumi. And we'd discover, before the dance, that we had forgotten the little caps that string glow-sticks together, so we couldn't string them. And

bunny_hugger would discover that she had her marionette dragon on the 'to be sewn' pile because there was a dangerously loose thread on it, one that would ultimately snap at the dragons panel. This is all stuff we can fix before the next convention, at least, unless we forget anew.

Motor City Fur[ry] Con always has some good stuff for sponsors, including T-shirts and drinking mugs. These were not at registration this year, but instead at a Con Store opened in some spare hotel space. At registration were a cute little newspaper-style flyer with the con schedule. And, it turned out, this surprisingly slick, small (roughly A5-size) hardcover with the full schedule and information about the attendees and even some spare pages. After we grumbled about the chintziness of the newspaper-con-schedule, the hardcover con book was a pretty sound rejoinder.

The con store was closed, although we had got there ten minutes before its posted 7 pm close. We'd have trouble getting our t-shirts and mugs, and ultimately not secure them until Sunday. The T-shirt was great, although the mug was not the traditional glass. It was a slender metal cup instead. It's nice enough, but if the choice is a glass mug or a hardcover con guide we'd rather have the glass mug. (That said, not that we use the glass mugs as anything but proof we've been to every Furry Connection North/Motor City Fur[ry] Con to date.)

I had an idea for dinner. There was a White Castle nearby. The road to it was closed for repairs. My satellite navigator did not understand why I was being difficult about this (I have no idea how to tell it to detour), nor was I sure what the road network was like. But it all came out okay and we found the White Castle. A great one with old-style signage but modern-style Impossible Burgers. And a Freestyle Coke machine, although one that was out of Fanta Zero. It took a good long while to get our vegan burgers --- they always do; they're only started when someone orders --- but it took even longer for me to get my change. They had to send out for change and I regretted not just paying with my credit card, at least until they found for me an old-style, pre-redesign $10 bill. They asked if it was all right to give me this old bill and of course it was. When's the last time you even saw a pre-redesign $10? And this one had a printing date of like 1990. And was pristine, as though it hadn't even circulated. There's like a 40% chance it was counterfeited last week. How could I not take it?

Anyway, back to the con. By the time we had everything together again we were kind of late, out there past all the major programming events we'd be interested in. (Some were missing; besides everything we would do, there wasn't the Text Adventures panel this time around, for reasons we don't know.) Dealer's Den and Artist Alley were closed, too. We did look into the Video Gaming room, and the Board Gaming room. And looked at the setup for the escape room, which we never did sign up for.

In Hospitality we discovered ... well, the place was larger than what it'd been in past years, with long rows of tables that provided plenty of seating but not so much chance to wander around mingling. But the tables also were covered with white paper, with boxes of crayons all over. The invitation to draw on the tables was irresistible and few people resisted. Some people turned it into games, too; we'd see a good number of Hangman puzzles, and tic-tac-toes, and people leaving messages in ASCII, alongside all the pictures of people drawing themselves. (

bunny_hugger evoked her Stephen T Colbert side, drawing herself declaring, ``I am the moral law! And so can you!'')

We braved the return to our hotel room and changed into kigurumis, she as Stitch and me as Angel. We made a great pair, according to about 400 people who stopped us. It's natural that people find

bunny_hugger adorable. I think people are more impressed by the concept of me, a tall guy with a scruffy beard, in pink than they like how I actually look, although I would say I also look great as Stitch's girlfriend. Anyway this was how we closed out the night, prowling the con and then spending a good hour-plus at the pretty well-attended dance. We'd been to so many dances that were four people counting us, that to be at one which had several dozen people even at 2 am was a bit unsettling. Great to see, though. Yes, they closed with the traditional playing of Toto's Africa, and then something else when that wouldn't get folks like

So it took a while to get there, but we had a good close to the convention day.

Trivia: Among the shops still in operation on London Bridge in 1755 was Coles Child, chiefly a toy shop but one which listed among is goods ``Fishing rods & Lines & all Sorts of Fishing Tackle''. Source: Old London Bridge: The Story of the Longest Inhabited Bridge in Europe, Patricia Pierce.

PS: Find The Factors hosts the 127th Playful Mathematics Education Blog Carnival, which is almost nothing but what the subject line tells you.

PPS: And here's some more of the Ruthven Museum Building and the University of Michigan Museum of Natural History. 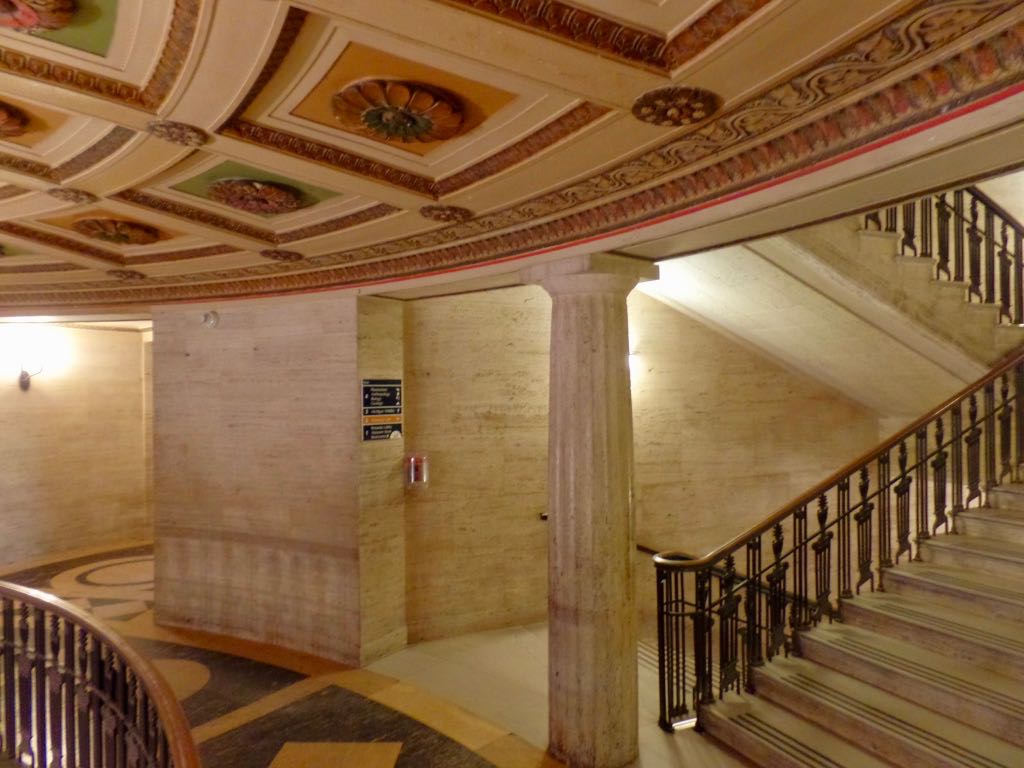 And the stairwell, which includes those nice old-fashioned columns like we can't get in public architecture anymore. 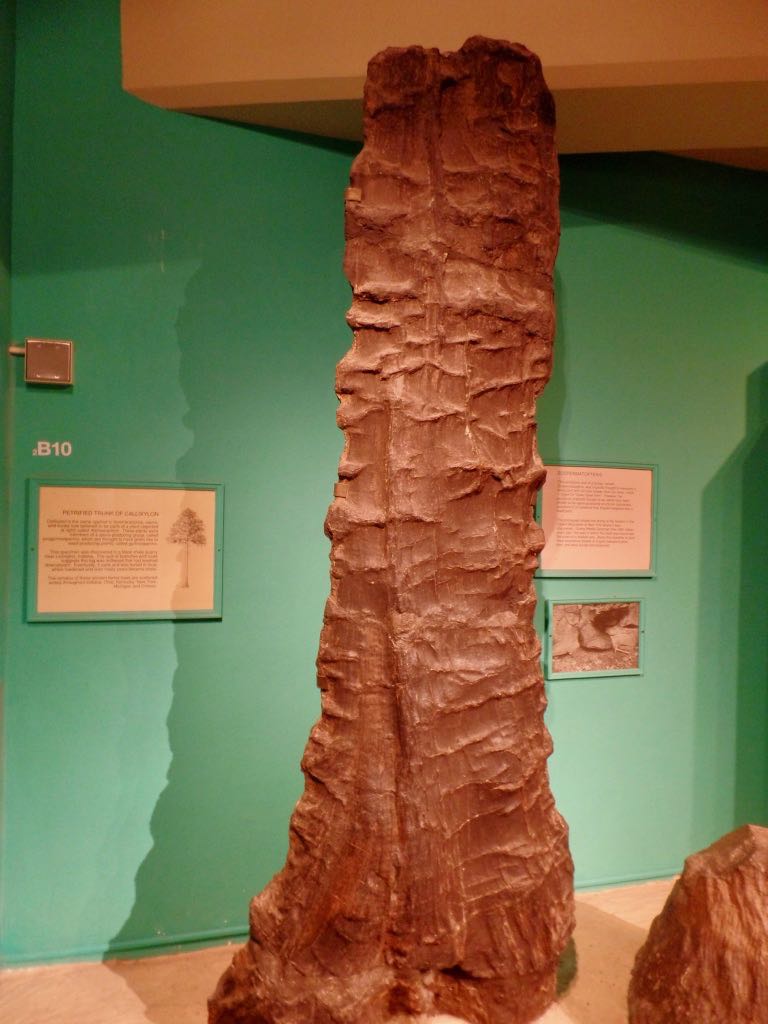 And into the nature! Here's a petrified trunk of a callixylon, discovered at a shale quarry near Lexington, Indiana. 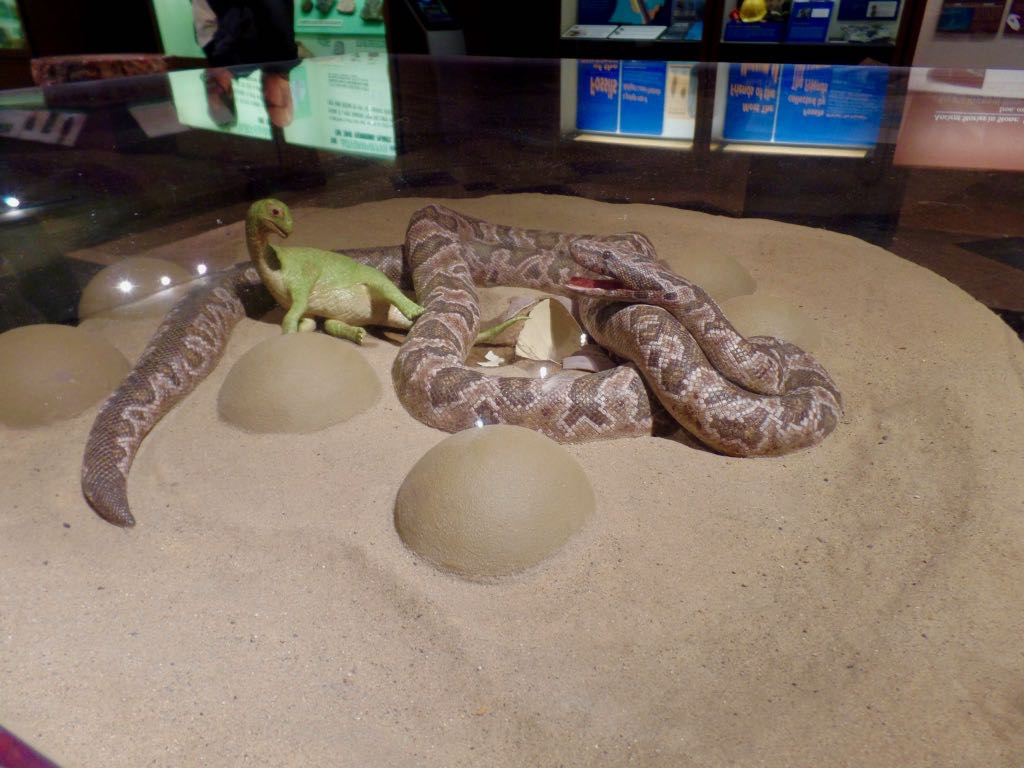 A model reconstruction of one of the scenes held in fossil form at the museum, of a large snake and a baby dinosaur just out of the egg.