I apologize for doing another photography day, but this weekend is Pinball At The Zoo and I just do not have the time and energy to write up the convention and my humor blog and my mathematics blog and maybe even do a thing for work, so, this is the easiest thing to pass off. So here's more of the Ruthven Museums Building in our farewell visit and I'll get back to Motor City Fur[ry] Con for Monday.

bunny_hugger's father has not adopted Peewee. Turns out the county animal control meant the dog would have to be kept for five full business days, of which Good Friday was not one. As I write this, too, they had not been able to do the temperament check. So the dog might become available Monday, but there's no guaranteeing that. That nobody has called Animal Control to claim it is a bit reassuring, as it suggests we didn't accidentally swipe someone's pet who ust kept getting loose. 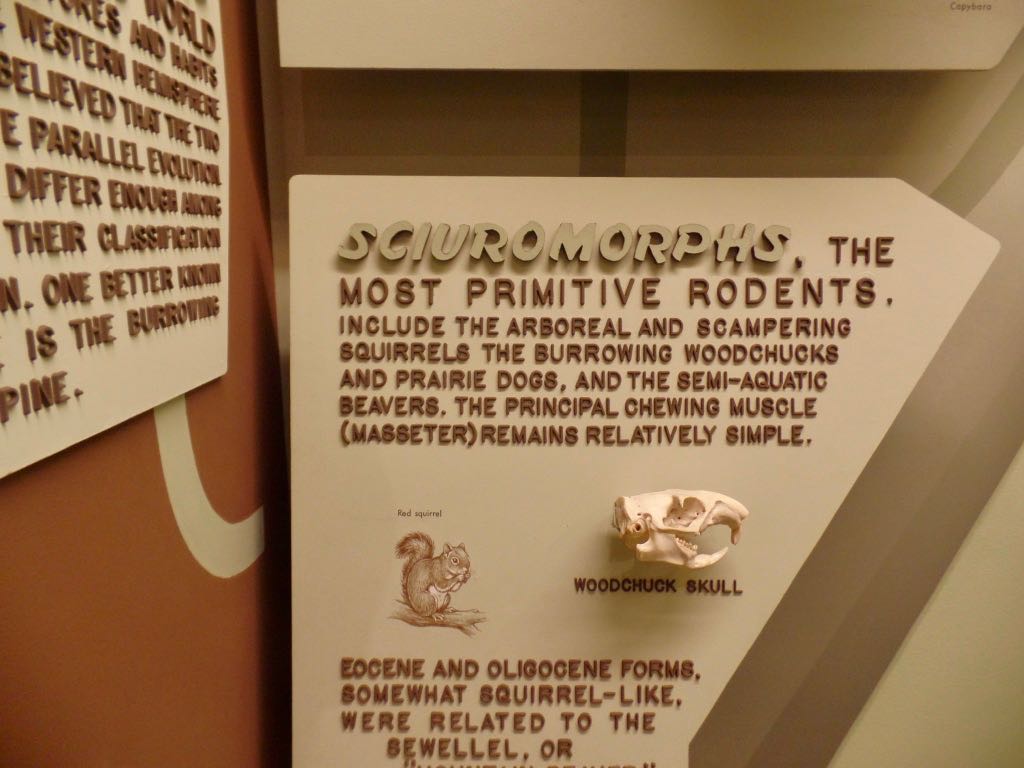 The museum picks a fight with Moxie-Man by labelling sciuromorphs as ``the most primitive rodents''. And it is hard to imagine the museum writing this in the same way today. 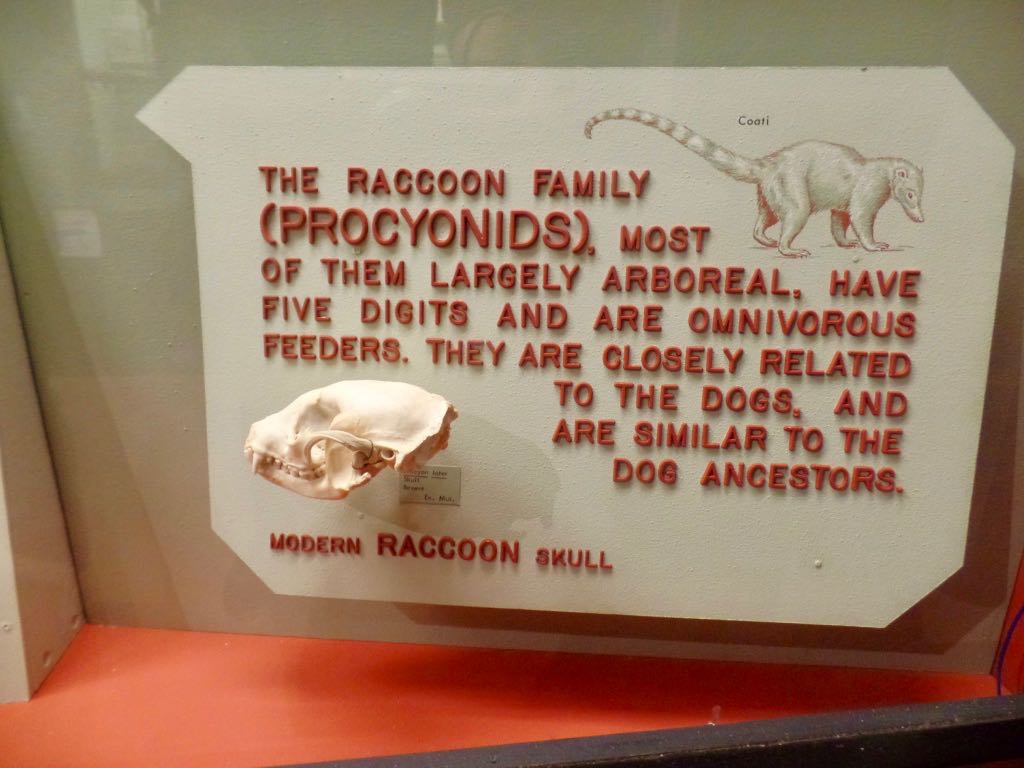 Skull of a raccoon and a nice picture of a coati used to explain procyonids. This was about all the space they got too. Calling procyonids 'closely related to the dogs' was probably fine enough taxonomy when the sign was put up --- there's a reason the family is named for Procyon, the brightest star in Canis Minor --- but these days procyonids are grouped into the Musteloidea superfamily, and are lumped as closer to the weasels than anything else. 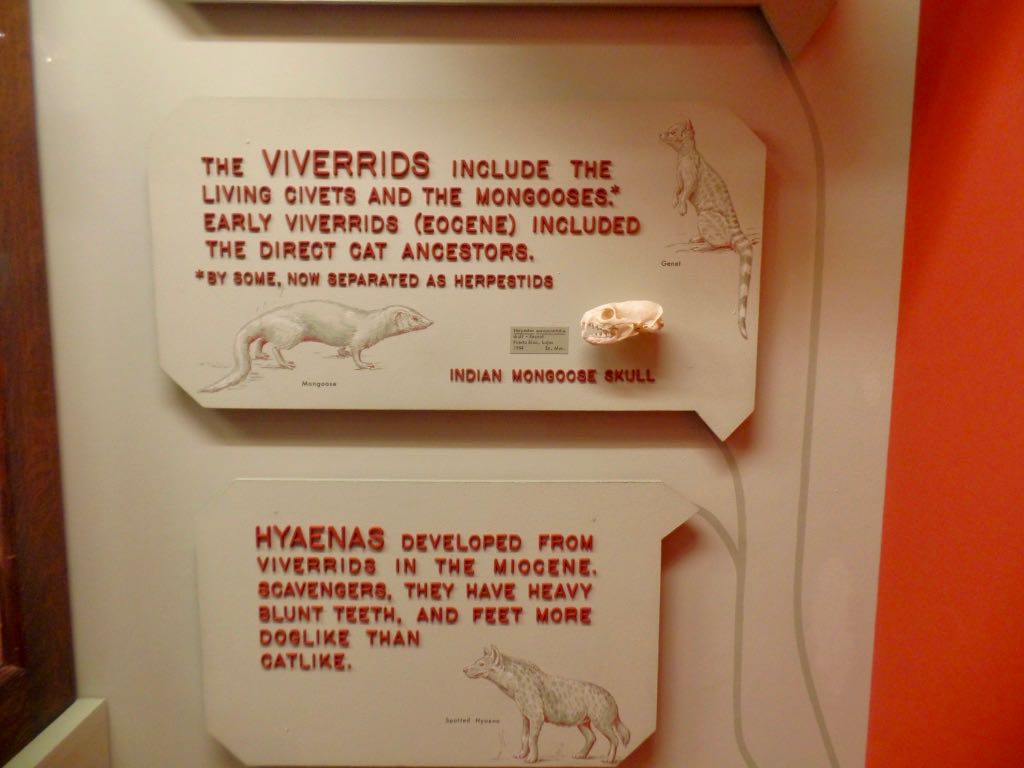 The footnote that mongooses are ``by some now separated as herpestids'' would probably allow us to date the writing of this panel, at least if we knew where to find a history of taxonomic classifications. 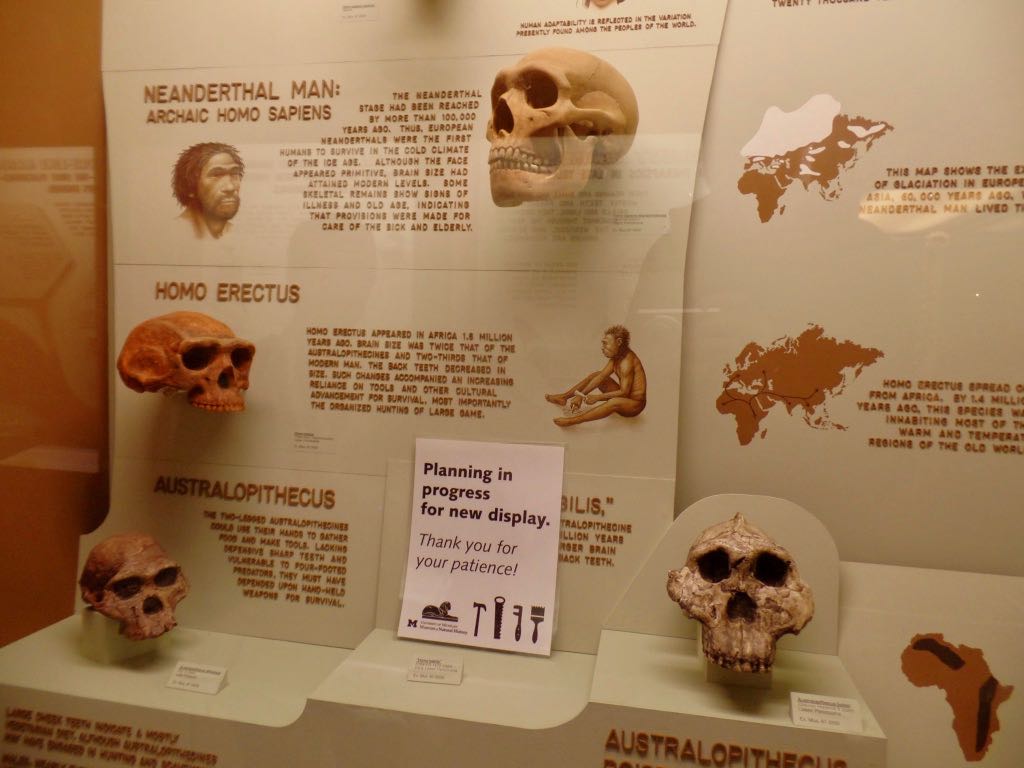 I, too, wonder what it is they must have been writing about Homo habilis that's so bad they had to cover it with a giant ``Look we're going to do oh, lord, so very much better please give us a little time we're sorry stop writing letters please?'' 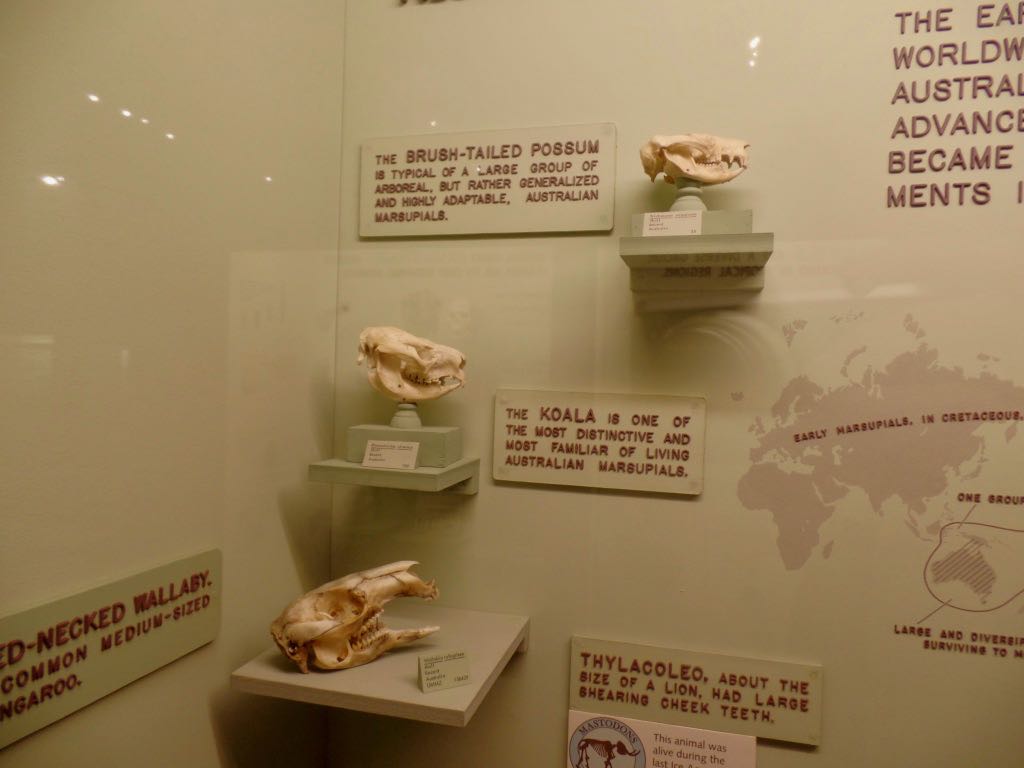 ``The koala is one of the most distinctive and most familiar of living Australian marsupials.'' hm. Well. Yes, it is, once you get past about fourteen species of kangaroo and wallaby and wallaroo and kangaby and all that. 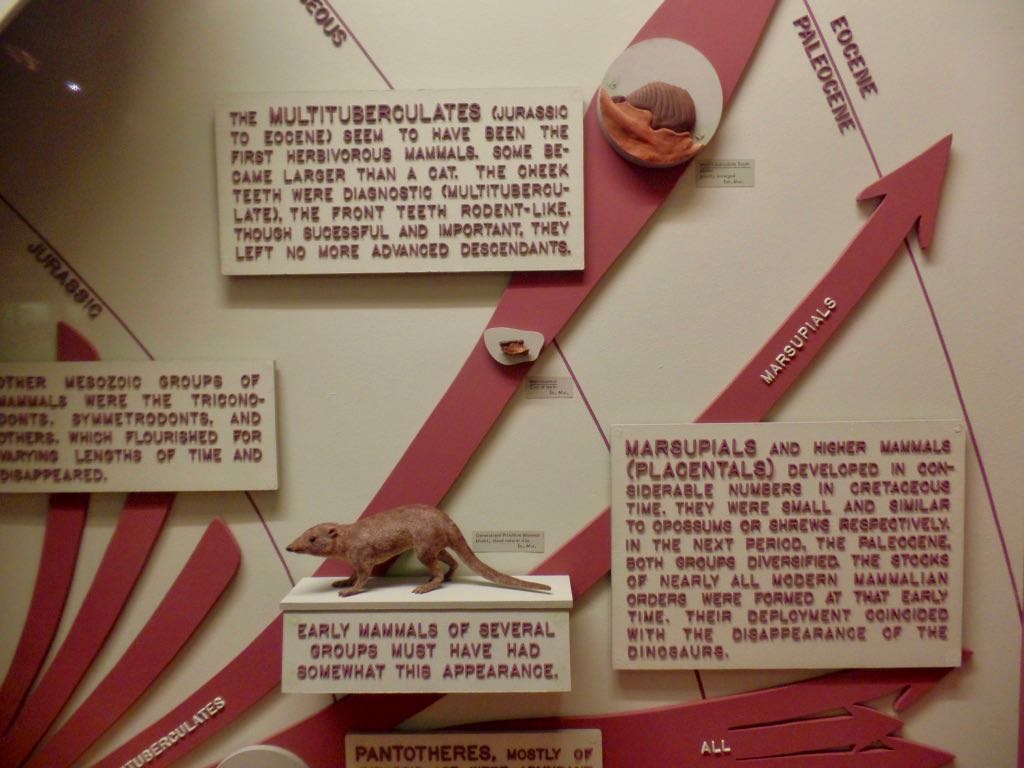 Part of their cute three-dimensional-style panel of animal evolution. Somehow the assertion that ``early mammals of several groups must have had somewhat this appearance'' tickles my fancy. Must be in how it uses the authoritative voice to give a ``I dunno, something like this'' answer. 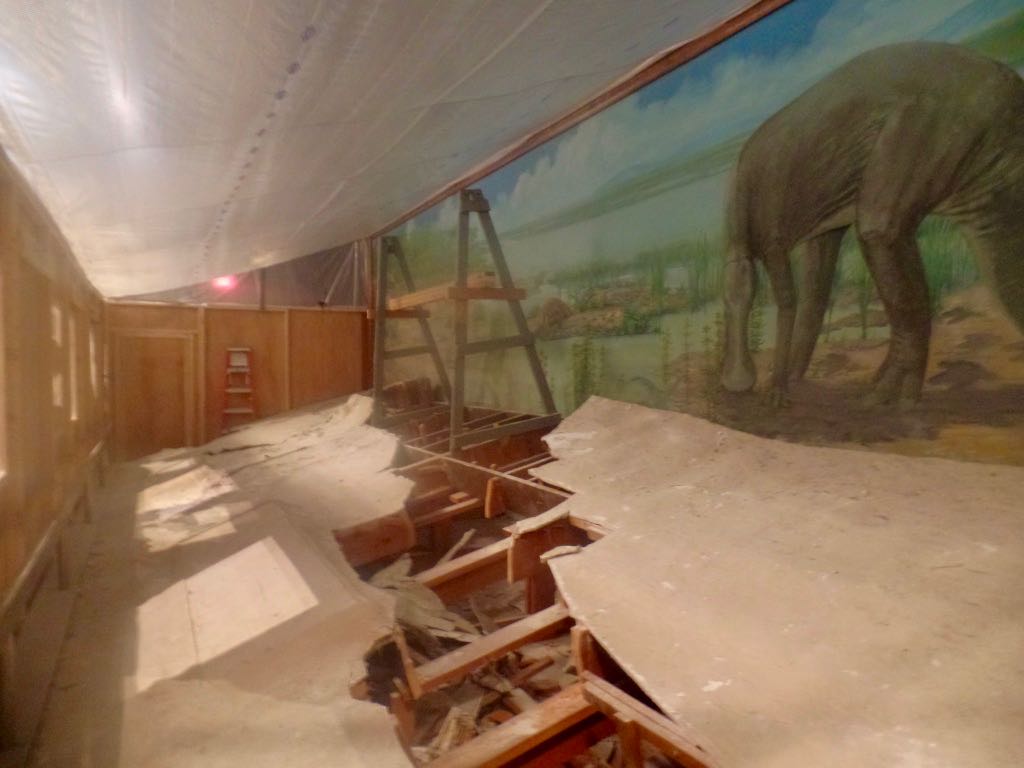 So I know this doesn't look like anything, but it used to be an Edmontosaurus dinosaur fossil, and a big one. One of those that's the centerpiece of a school field trip. But the big and delicate stuff like this has to be moved first, so here it's gone. 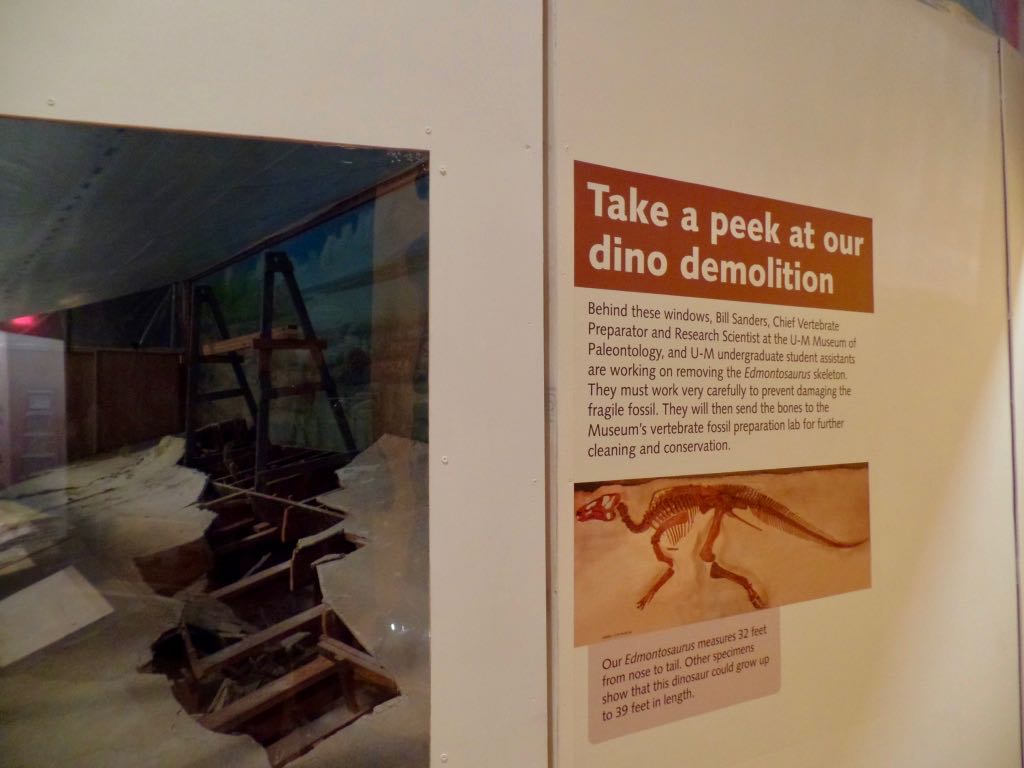 Here's a spot more context for the Edmontosaurus, including a picture of what it looked like in place. Unfortunately ... 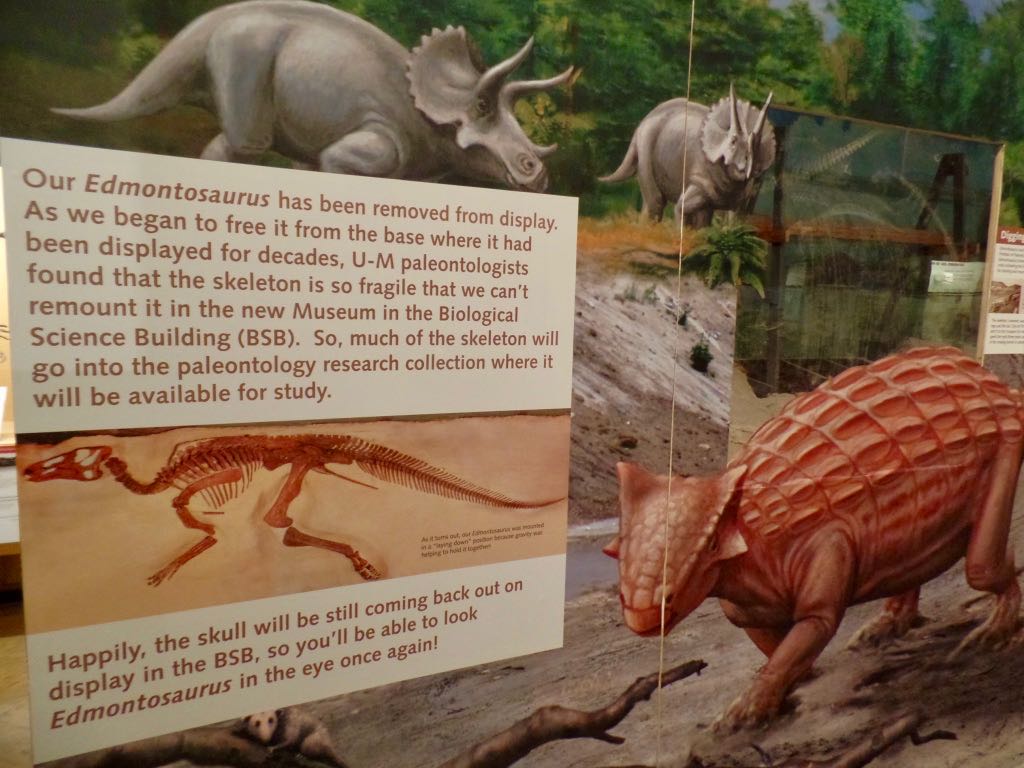 So, yes, it turned out the fossil was fragile enough that they can't remount it. The text mentions the fossil having been ``mounted in a 'laying down' position because gravity was helping to hold it together!'', which I like as explanation because it seems to suggest it's explaining what happened to the skeleton without quite doing so. And, in any case, phoo. That's sad news. 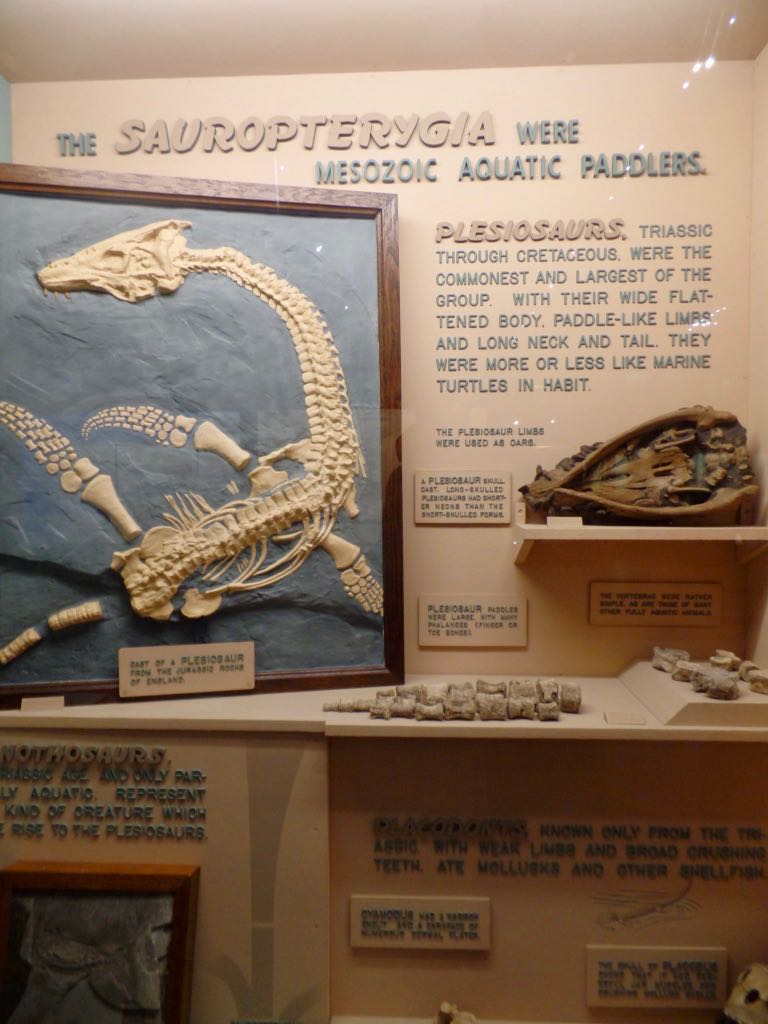 And the nice big panel about Plesiosaurs from back in the days before people tried to pass them off as some kind of explanation for the Loch Ness Monster. 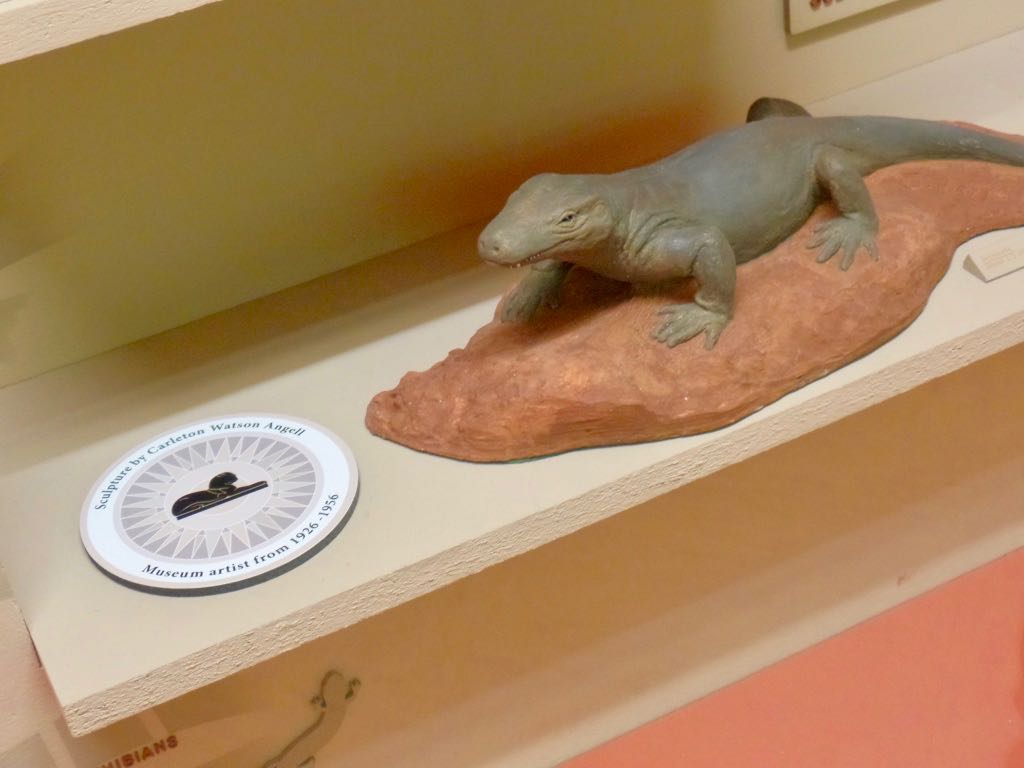 This is one of many animal sculptures with a tag nearby identifying its creator as Carleton Watson Angell. Like it says, he was the museum artist for thirty years and he's just created a lot of these figures. So they've reached that curious state where they're museum-worthy as artefacts in themselves, regardless of whether our thinking about, like, how dinosaur skins looked has changed to the point that the sculptures aren't useful as examples of animal life. Trivia: The potato was introduced to Virginia by English colonists bringing it from Europe.
Source: Food In History, Reay Tannahill.