Yes, it's my last chance for romance tonight

Did I finally have time to get back to filling my mathematics blog with sweet, sweet content? No, not even close. This is going to be a terrible month for my readership statistics. Here's what meager stuff I did publish instead.

And now for a story comic plot recap so eagerly anticipated that, no joking, I saw my readership numbers spike ahead of its arrival.. What's Going On In Rex Morgan, M.D.? What's With Edward's Dog Not Being Seen? February - April 2019 explained in both what went on and what joke Terry Beatty was going for with it all.

Now let's get back to the Ruthven Museums Building and our last visit to it in its 2017-present incarnation. 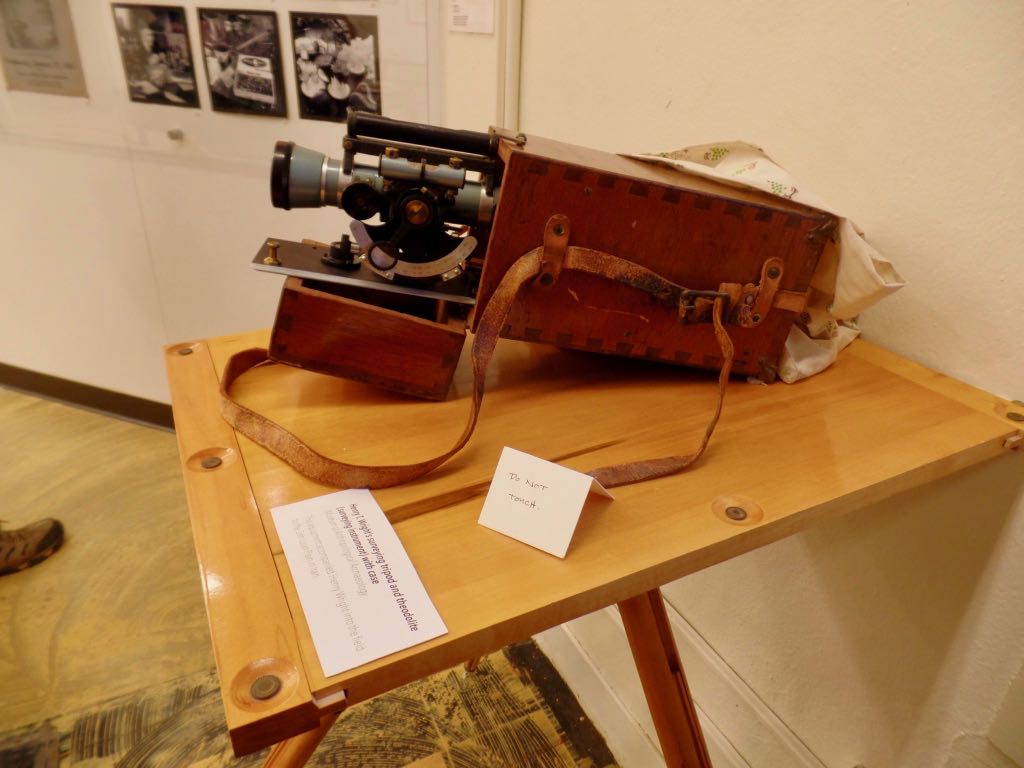 Some more old fieldwork equipment. This was a surveying tripod and theodoline; I can't tell you how recently it was still doing useful work. 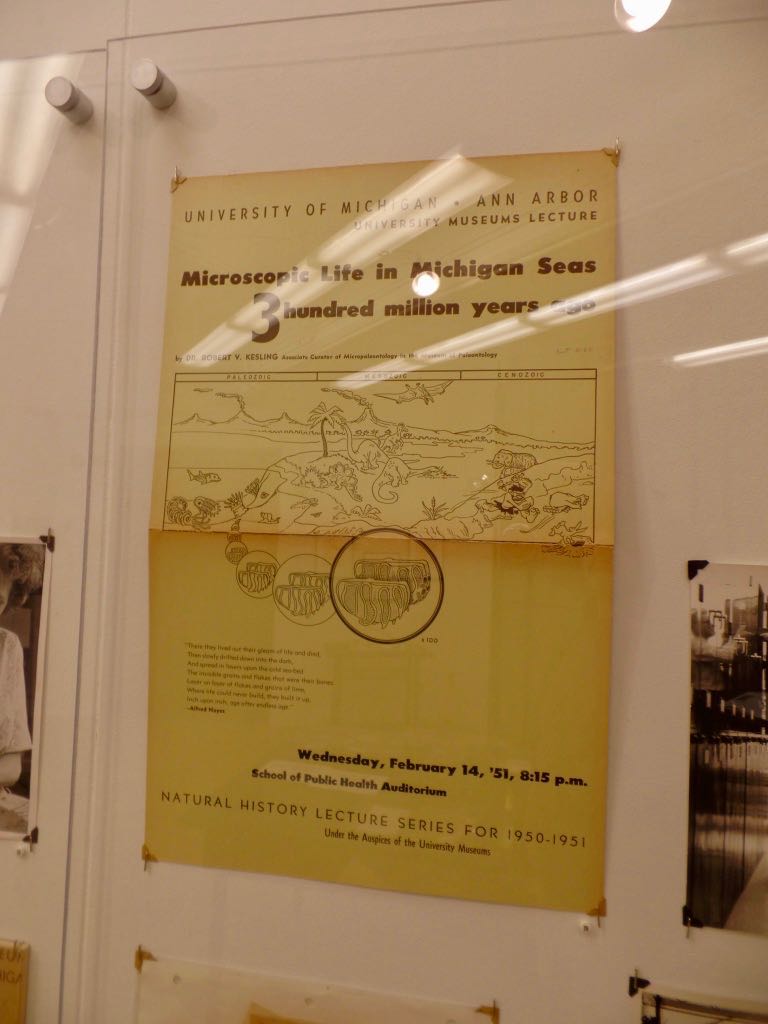 Any plans for Valentine's Day, 1951? Old lecture poster including some of that great mid-century line art. ... Before you complain about there not being so many dinosaurs in Michigan 300,000,000 years ago, notice that the whole picture is underneath a bar marked Paleozoic, Mesozoic, and Cenozoic. Also that there's a bunny under the Cenozoic, which checks out. It's aspects of the whole Phanerozoic Eon, is what I'm getting at. 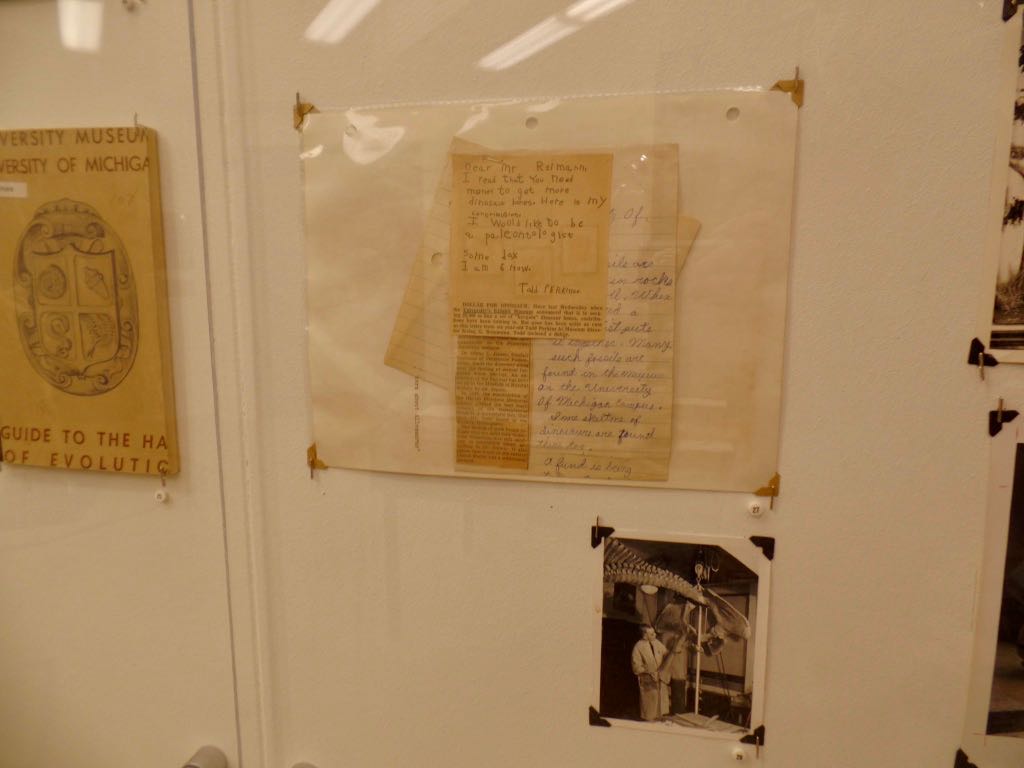 Thank-you letters written by kids to the museum, and press clippings about the place too. 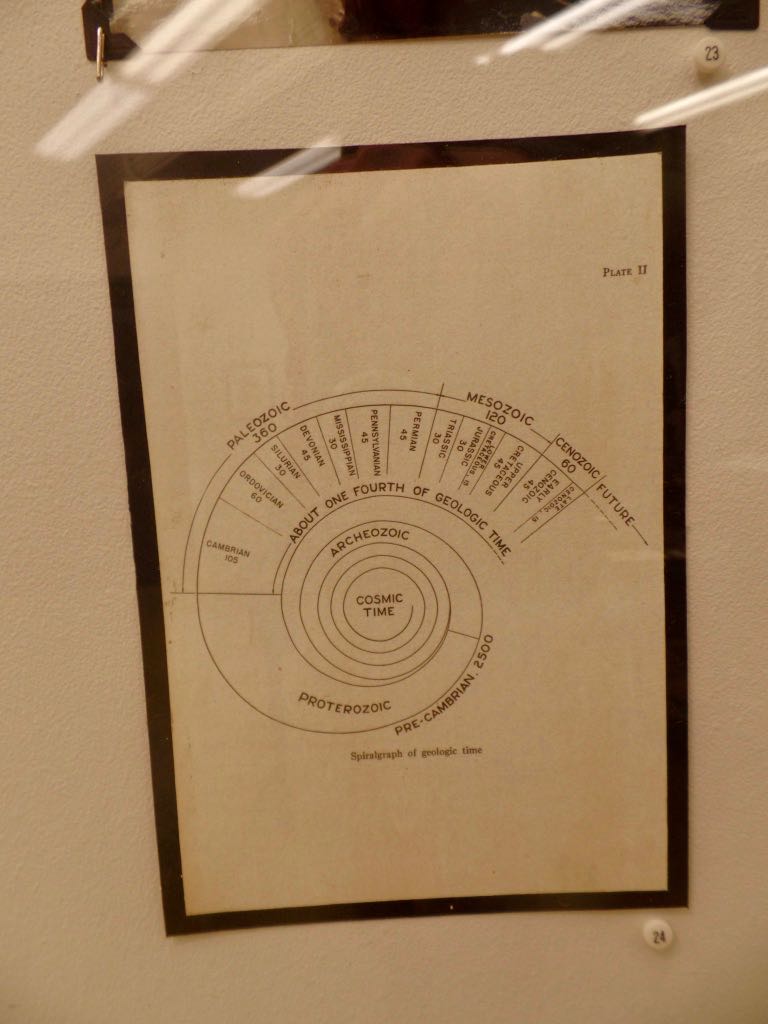 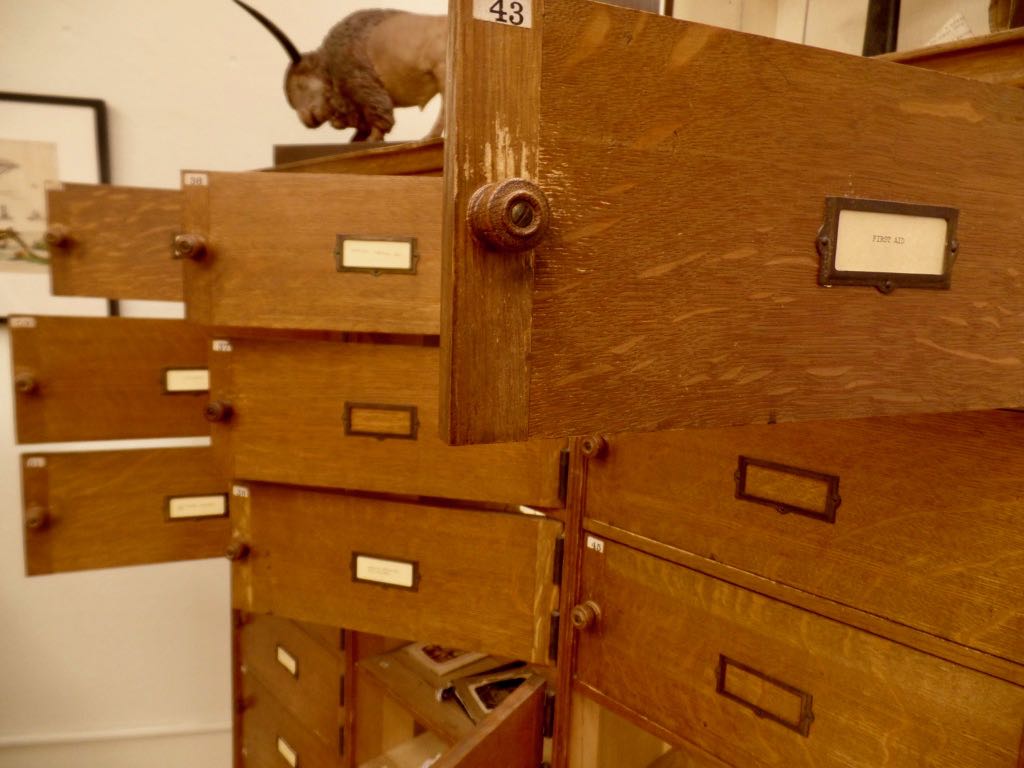 Back to the retired cabinets, many of which were open or labelled. First Aid is of obvious use, although I would've had the sign there be a little more prominent than the one (not in frame) for Manilla Envelopes. 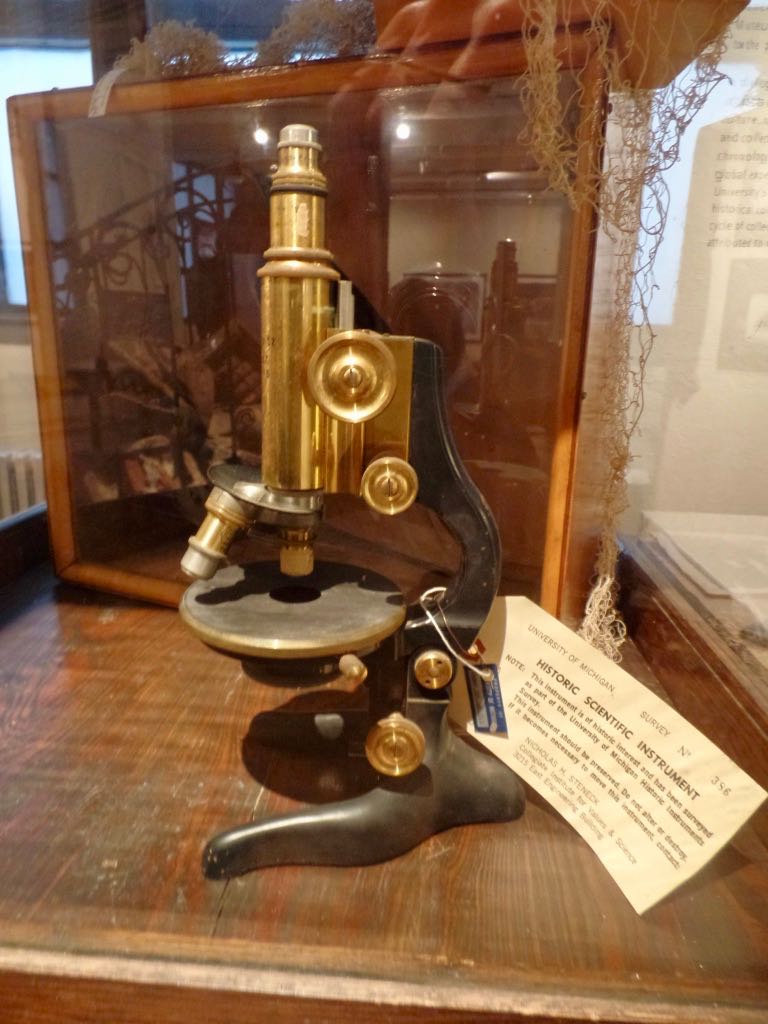 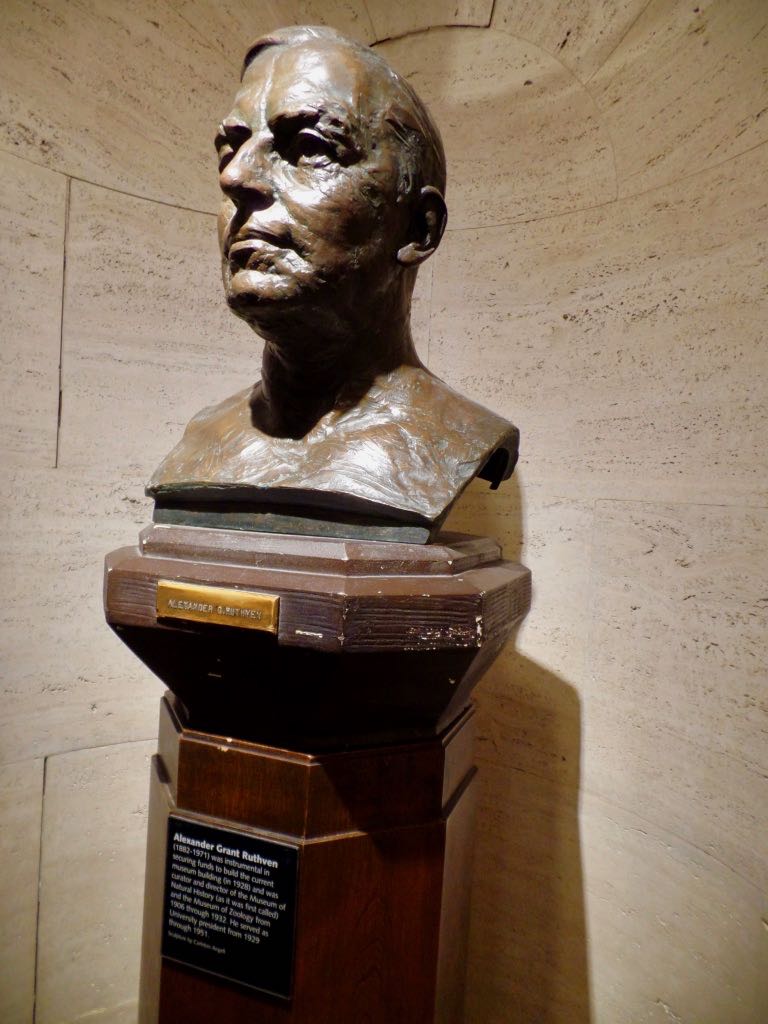 And here in one of the corners of the museum is a bust of Alexander Grant Ruthven, for whom the museum building was named. 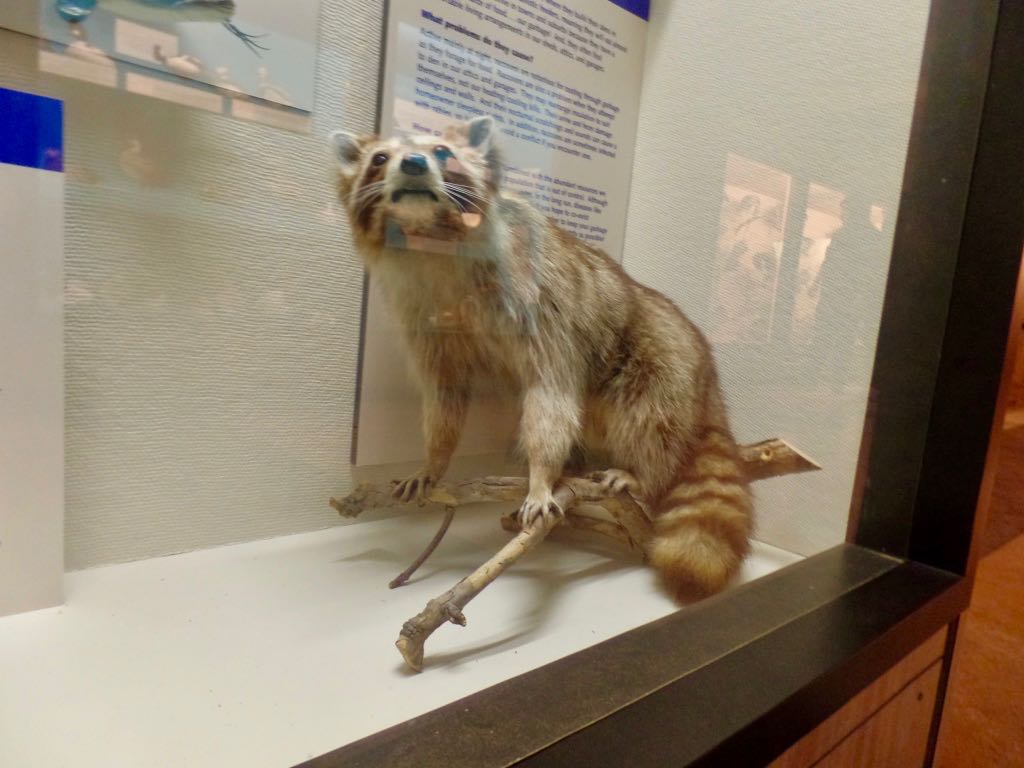 The upper floor held taxidermy and other displays of the current wildlife of Michigan. Here's a raccoon looking, as taxidermy animals always do, strangely pale, considering. 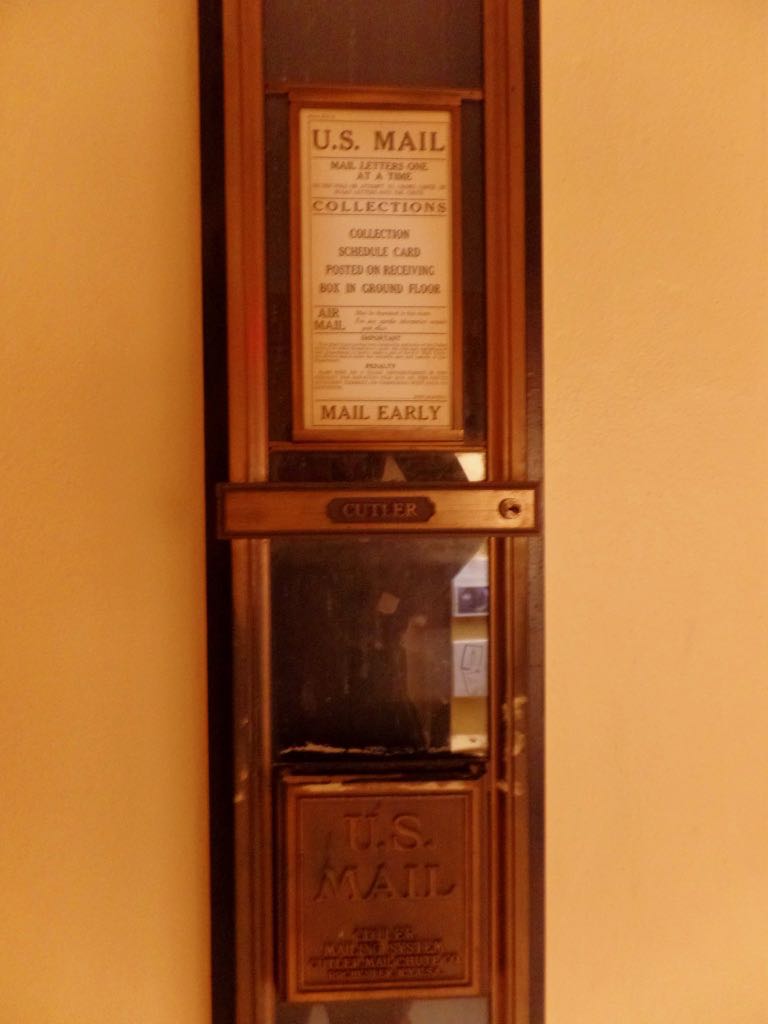 More antiques: an actual mail chute, like you see in silent movies where someone drops in something they should not have. 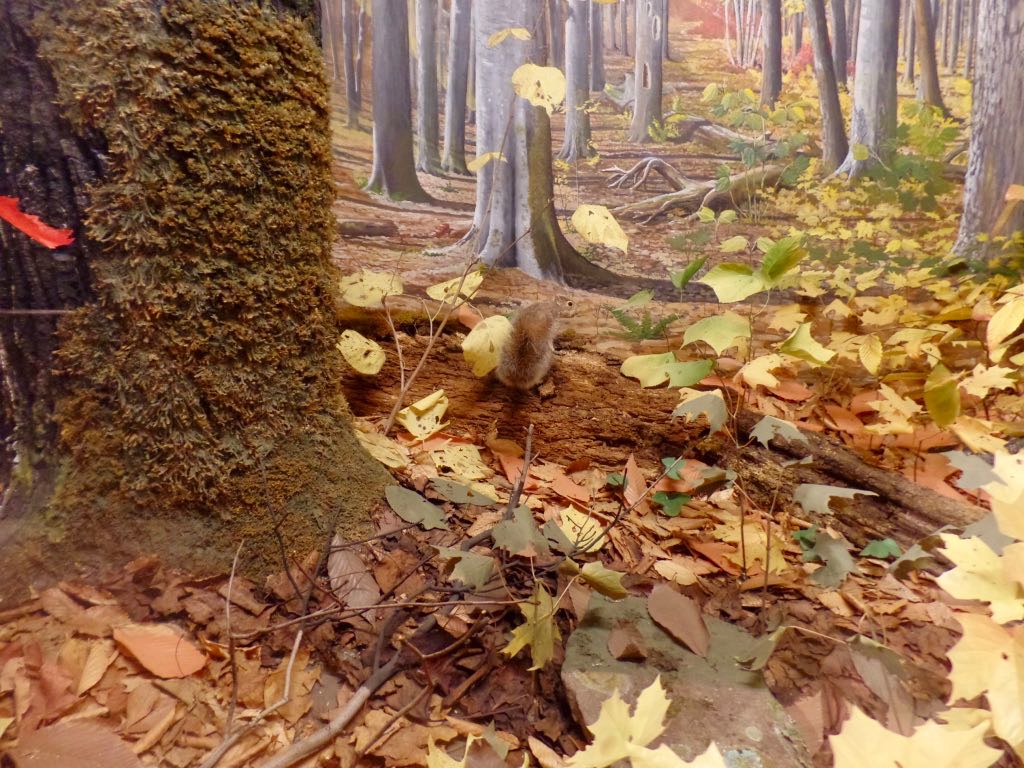 Taxidermy display of the forests of Michigan, showing off a small, pale version of squirrel in front of the mural wall that in reality lines the north end of what is now I-96. 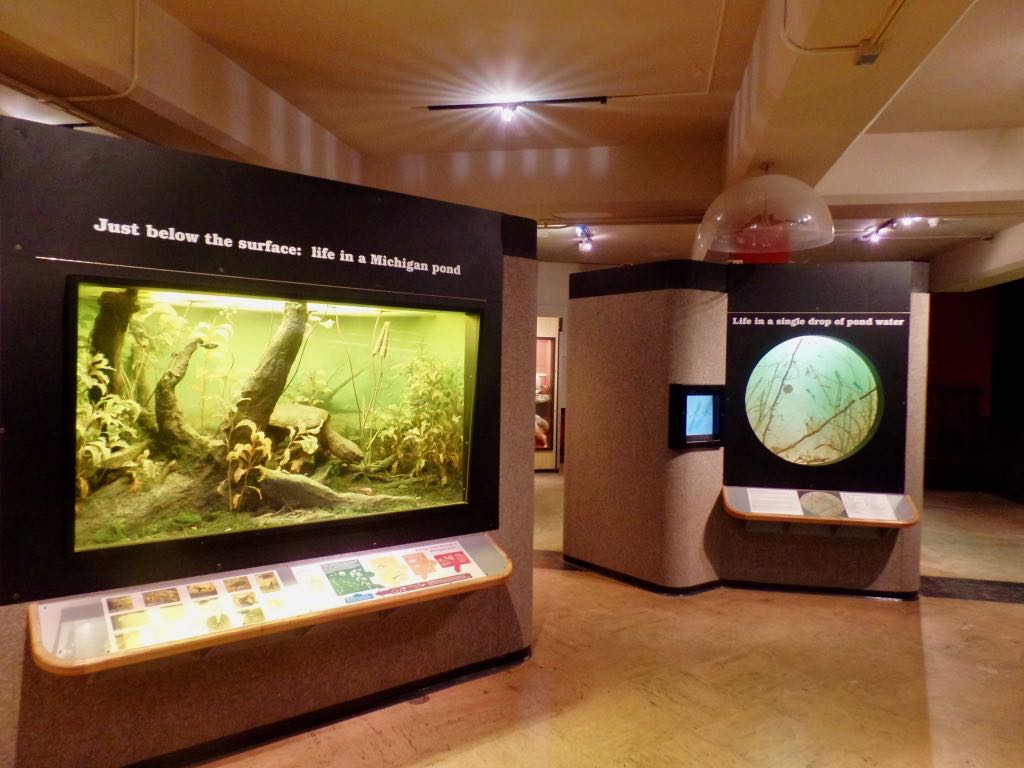 Displays of life in the Michigan water. The plastic dome over the pond water exhibit is one of those 70s things that try to give us a stereoscopic soundscape representation of microscopic life. I could never be sure I was standing in the right spot to hear the thing clearly, compared to the ambient noise of the museum. 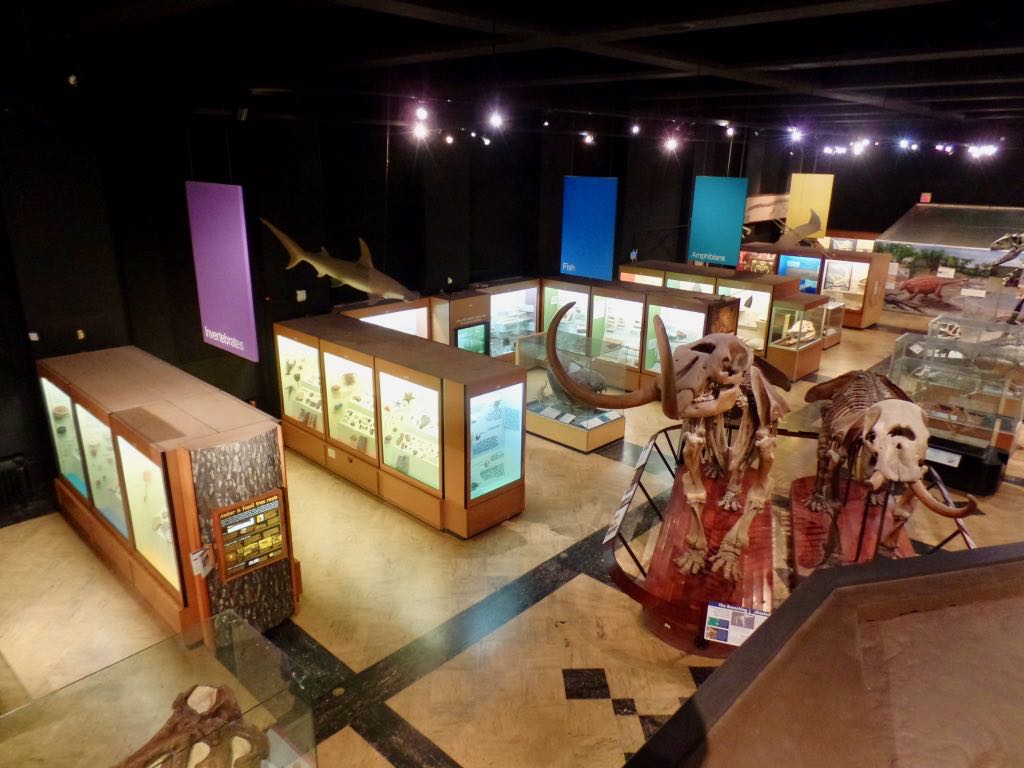 The modern-natural-history stuff looks out over an open half-wall to the fossils and other life exhibits, so here's the display cases I've been sharing the past week, but from a greater distance. Dig that floor pattern, not inconsistent with what was unearthed in the office setting.

Trivia: The Theatre Royal, the first building of Edinburgh, Scotland,'s New Town, was built in 1768. Source: How The Scots Invented The Modern World, Arthur Herman.

Currently Reading: Uncle Sam Presents: A Memoir of the Federal Theatre 1935 - 1939, Tony Buttitta, Barry Witham. It's a quite breezy read, a guy's chatty reminiscences of his involvement with the Federal Theatre Project, and the vindication that most audiences quite liked live theater given half a chance and a show they could afford to see. Granting that's as told by someone who lived in and believed in the program. Fascinating aside: the WPA Circus, which featured only a handful of animal acts since, as the joke went, there weren't any elephants on relief. More to the point there wasn't any additional stipend for animal care, so, you could hardly afford upkeep of a big animal and work the show.