And you've got me wanting you

Although we got back to the convention hotel we didn't go in together.

bunny_hugger had not had enough sleep, not in her short nap, and not in the weeks before the convention either. Her work schedule this semester has been really brutal. So, with nothing particular on the con schedule that we could find, she chose to nap in the car for an hour or so. I went inside. Not finding any particular events --- there wasn't much programming to interest me --- I wandered into the video game room. I settled on the Atari 7800, and tried a couple of games there. Several times I had to go back to the game room attendant to admit I had no idea how to start a game. But I did eventually get very nearly to finishing one level of Tower Toppler. And, eventually, learned how to start a game of the Atari 2600 Video Pinball. I can't say that's a great pinball game, but it turns out you can play it very much like you'd play an electromechanical game, flipping as little as possible and letting things just happen instead. So, is that a good adaptation of the game? ... I don't know what to say.

After about an hour of this, I thought to see if

bunny_hugger was awake. We hadn't set a meeting point, but I guessed hospitality would be likely. And there she was, talking with Shouda, king of the food services. We were there seeing the last remnants of the dinner rush. Which looked to be a good one: they made a serious effort at getting vegetarian options ready. Here, for example, were a few last pieces of vegetarian lasagna. We hadn't eaten that long ago, but why would I turn that down? Well, it's cold,

bunny_hugger warned. All right. She repeated the warning, I thought, and this seemed like far too much alarm over the danger of cold lasagna.

In my stories here I tend to focus on the enjoyable stuff we do, and that's easy because so much of our lives together are happy. But I know it leads to a distorted idea of what we're like. Read my journal and you could come up with the impression that the only sad thing about me and

bunny_hugger is that someday one of us will knife the other in an argument about who was luckier in their choice of spouse. That's still the way I'd bet we'll go. But we do have petty fights, usually over a pretty rote script.

The thing is I take disappointment pretty unflappably. But the way I do this gives

bunny_hugger signals that I'm not taking the situation seriously. When it's something disappointing her too, this gives her the impression that I don't care, so she reiterates the problem. But this gives me the signal that I'm supposed to do something about a problem I thought I was already addressing. But what's there to do if it's just, accept disappointment? But if I'm just accepting this, how does she know I take it seriously? Is the problem that I didn't understand the issue? I often end up shouting, which I'm never proud of, but at least it breaks this cycle, albeit to put us in a different fighting mode.

And Motor City Fur[ry] Con had been a lot of disappointments. Some of them were unavoidable:

bunny_hugger's work schedule forced us to miss the first six hours or so of the convention. Some were our mistakes: the things we forgot to bring, like my red panda slippers or my con badges. Some were beyond our control: the new location felt unfriendly, and the hotel we stayed in had unpleasant touches like a dubious air-conditioner, and guests who smoked enough pot to remind us of angry nights with our own neighbors. Many were related to the con: there wasn't much programming that interested us. Some of what did, like the game show panels, were at hours we couldn't attend, because of work or because it was Saturday morning when we were still waking. We hadn't seen many of the people we always saw at the con in the past. Twitchers, for example, had gone to the old, wrong hotel the day before; and then today, we couldn't see him long. The new place was bigger and we just weren't meeting anyone. The important thing is that the day and a half had been a long string of little disappointments to swallow.

So I was already running on my ``I don't know how to tell you that I have accepted this not going right'' mode. And then to be told about the lasagna being cold, repeatedly ... well, that pushed me into shouting mode. ``Fine,'' I snapped, or something like that, and started walking off, setting off

bunny_hugger's anxiety about making a scene.

So now that was terrible, and my fault.

Trivia: In Athens of about the fifth century BCE the name of the fifth month of the year was Maimakterion. Source: Mapping Time: The Calendar and its History, EG Richards.

Currently Reading: Mike Fink: King of Mississippi Keelboatmen, Walter Blair, Franklin J Meine. 1930s book about the then-being-forgotten, now-quite-forgotten 19th century frontiersman legend. Which has some good parts. One could make the argument that braggadocio is the first and truest American art form, for example. And 19th-century frontier-legend braggadocio just had incredibly good game, braggadocio good enough that merely bragging about it would be false humility (``[ his daughter Sal Fink ] fought a duel once with a thunderbolt, an' came off without a single scratch, while at the fust fire, she split the thunderbolt all to flinders, an' gave the pieces to Uncle Sam's artillerymen, to touch off their cannon with''). But the book also has some really ... uh ... oy parts, like everything mentioning the Indians (like, the anecdote quoted above ends with Sal Fink dragging fifty Indians into the fire they meant to burn her in).

PS: Reading the Comics, April 26, 2019: Absurd Equation Edition so hey, technically I posted double-digits numbers of articles on my mathematics blog in April!

PPS: Not terrible is the Ruthven Museums Building, although it is of the stuffed remains of long-dead animals for now. 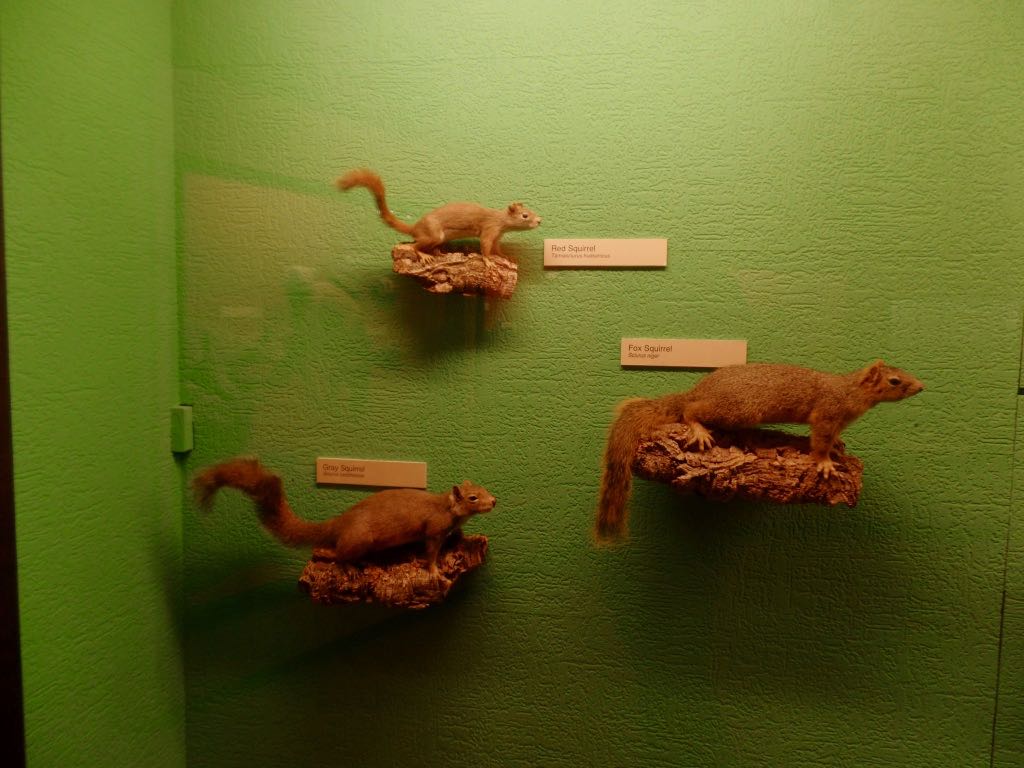 And a gallery of squirrels of Michigan, counting the red, the grey, and the fox squirrel. Not depicted: the black squirrels that are all over Lansing. (Yes, yes, black squirrels are just greys. Still, there's a lot of them in parts of the state.) 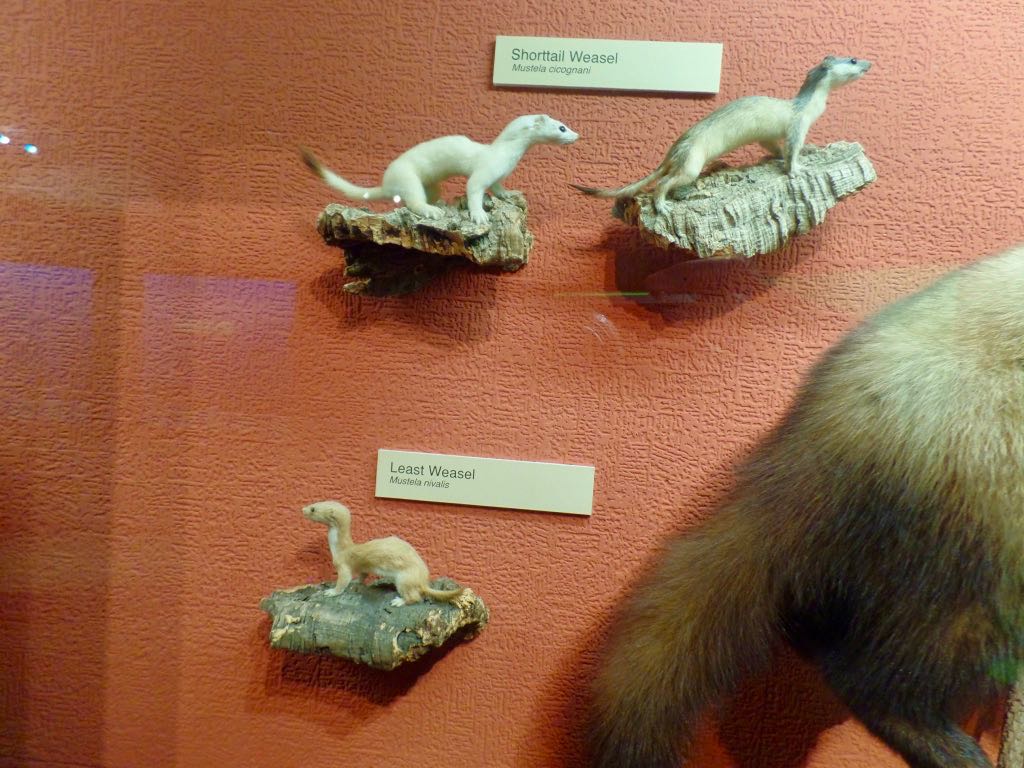 And the display of small weasels, going all the way down to the Least Weasel, which is about two-thirds its own size. 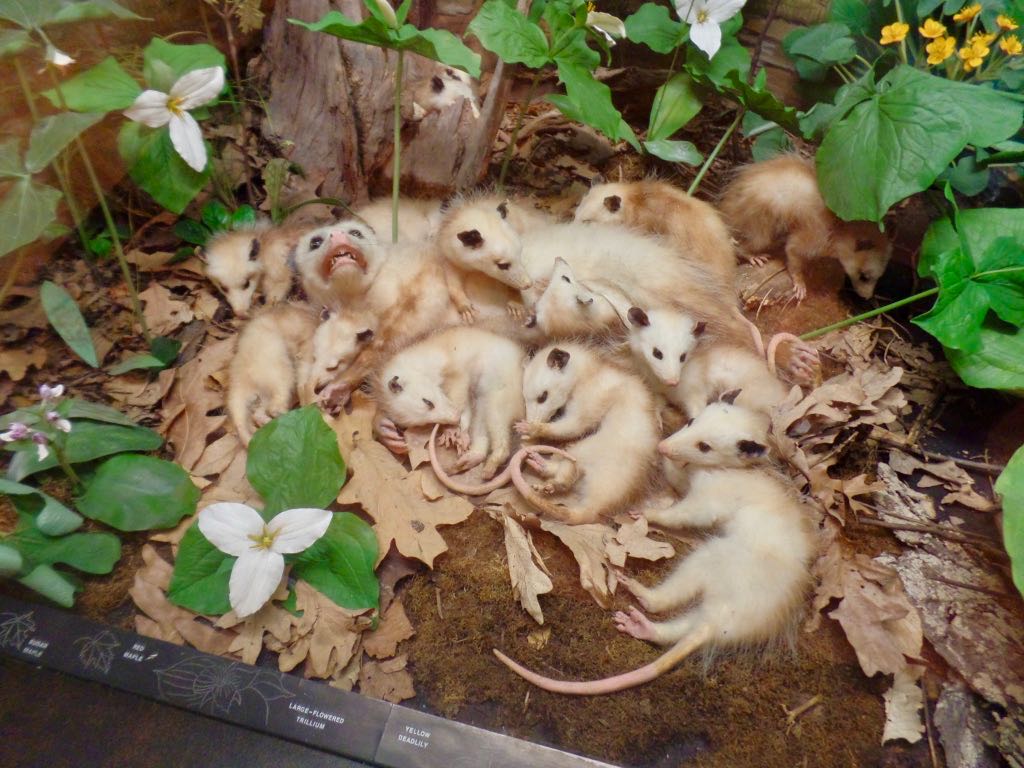