I just can't believe the loveliness of loving you

So, with the fragile mood crashed, what was there to do? What is there ever to do but pick up what spirits you have and move on? We gathered the food we didn't much need to start with --- I got the last piece of vegetarian lasagna and it was unpleasantly cold --- and we sat down. And ate, grumpily. And tried to talk about what we were fighting over, and what we were really fighting over instead. After a lot of small disappointments this was now a real low for the weekend, already racing near its end.

bunny_hugger drew on the papers covering the tables, a picture of her bunny self crying. She labelled it ``I wish I could draw well'', but she already does, at least the things she draws often, like herself.

Thing about being at the bottom is you don't stay there, though. Just being away in time from the incident helps some. And

bunny_hugger noticed one of the other sketches. It was of the rectangular box of a fire alarm pull, and a paw reaching for it, with the text, ``OwO *notices your alarm* what's this! UwU *pulls your alarm''. I explained that the main hotel had an early-morning (false) fire alarm, part of the worst new tradition of furry conventions. She hadn't known about it. She started laughing, and just kept laughing more at the scene. She left a note promising, she did literally LOL, and I can attest that she did.

But a good dopey laugh can change everything. And this was one of those things. From here the weekend picked up, and it never got disappointing again, except for the fact it ended and we'd have to go back home to normal days.

But the day was running out of fresh events. We could always hang around hospitality --- they had, as usual, different beers and ales and always just ran out of what

bunny_hugger was most interested in trying. Criss-crossing the hotel looking for people we knew didn't find anyone, though. SO we went back to our hotel to change for the dance.

We had both brought two kigurumis. Friday night for the dance

bunny_hugger went in her Stitch, and I went in my Angel. Saturday ... we decided to wear the same outfits again. There aren't many couples kigurumis and we do make a fantastic pair. A lot of people loved seeing us coupled like that. And, I think, me --- a tall, bearded, not-as-thin-as-he-used-to-be-but-still-not-fat man --- wearing a lot of pink exudes a really good, comforting energy.

And it was great to have

bunny_hugger in Stitch kigurumi since other people wore the same outfit, and it's fun passing someone in the same costume. Or a modified one: at least one person was wearing the Stitch outfit but with a head-covering mask, a pretty good hack for a lower-budget body-flattering fursuit. At one point in the dance the three Stitch suiters were right next to another, and I tried to get a photo of this coincidental lineup. This challenged the limits of what my camera could do, even in low-light mode. The pictures didn't come out clearly, but they're nicely atmospheric anyway.

We didn't stay all the way to the end of the dance. The 2 am end time seemed appealing, but, we also would have to get up and check out of the Candlewood Suites early in the morning. Getting a full night's sleep seemed more important.

Currently Reading: Mike Fink: King of Mississippi Keelboatmen, Walter Blair, Franklin J Meine. Irrationally offended now to learn that the cave with the river pirates in How The West Was Won really represented something that really happened for real in reality.

PS: My focus shifts at the Ruthven Museums Building. 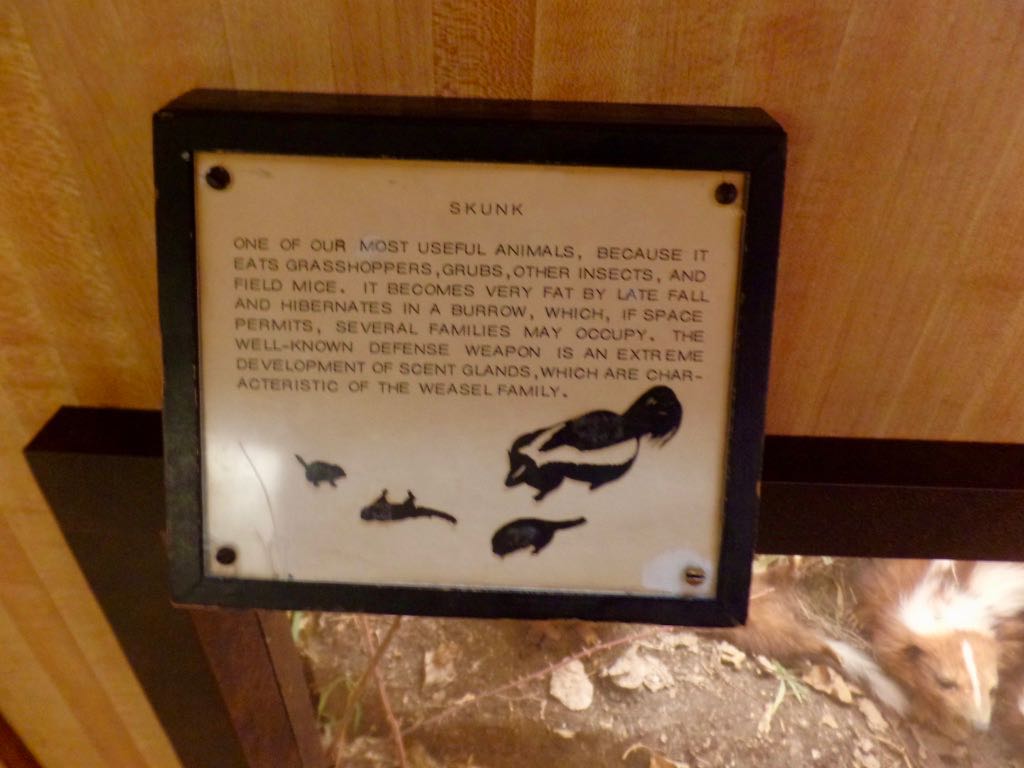 I'd started taking pictures of the dioramas and then got more fascinated by the explanatory signs. Based on the typeface, and the talk about 'our most useful animals', I think the sign has to be early-60s. Skunks aren't considered part of the weasels anymore, a realignment that I think taxonomists came to agree on in like the 80s or early 90s. 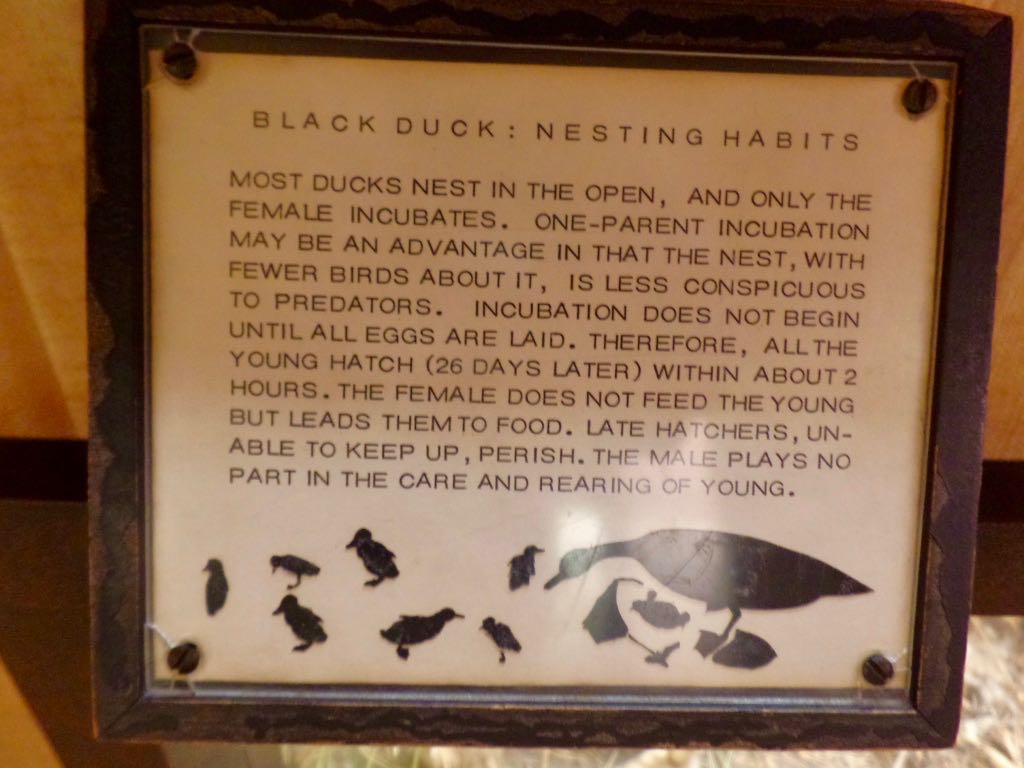 More old-fashioned information about ducks, this one making no judgement about how useful the birbs are. 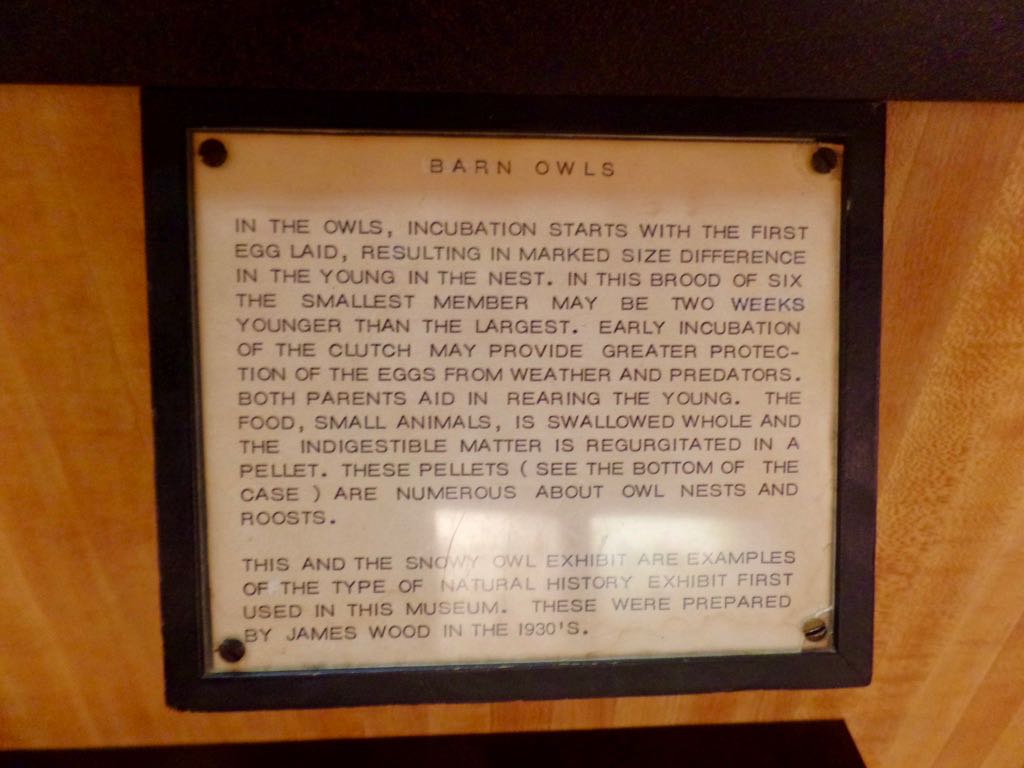 Barn owls, similarly, get their life history explained without any comment about who's doing what for the hew-mons.