I just can't believe it's true

Sunday at Motor City Fur[ry] Con started pretty lousy. Not for us, apart from the problem of having to wake up. For someone who was staying at the Candlewood Suites and as far as I know having nothing to do with the convention. His car's battery had died, and the hotel's portable charger was not charged. As I was moving luggage into my car, he asked if I had jumper cables, and I couldn't very well lie. But I thought this would take a couple minutes, not long enough to need to tell

bunny_hugger what was going on. And the guy's battery wasn't just dead; it was incredibly dead. I had to run and keep running my car to get his car going. Adding to the time constraint is the only way I could get my car close enough that the cables would reach from my battery to his was to park so as to block his car door, and he had some kind of mobility issue. Well, it saved somebody from a truly lousy day.

And it was shaping up to be a lousy day. Friday and Saturday had been windy but at least tolerably warm. Sunday was cold, rainy, and windy. We wouldn't have a hotel room anymore, so we had to pack everything in the back of my hatchback. Oh, and ... it is possible that

bunny_hugger left her small camera in the hotel. I haven't yet given up searching for it, but it's been conspicuously not present since the convention. But I never got back up to our hotel room to be an independent eye checking nothing was left behind. Her camera had run out of battery, even though it had been charging the days before, a mystery that will need resolving if it does turn up. But that's why we can't point to a specific moment at the con when she definitely had it and was using it on Sunday.

But there were some good bits. One was that we had finally learned the parking garage was free, so we parked somewhere that was not far from a hotel entrance, and was not being rained on, and was sheltered from the wind. And we were in time for the Dragons SIG.

bunny_hugger's dragon marionette broke while she was showing it off, but, we were able to get to one of the two species panels (the other was Insects, which ... we'd like to support but don't find that interesting in itself). It was your standard hangout, although as will sometimes happen the loudest guy in the room took over from the actual event-runner. Loud guy even said, at the end, he didn't realize the other person was the actual event-runner, he'd just thought nobody was doing anything. But it did end up a pretty well-run panel, apart from a lot of complaining about stuff they changed in the Eragon movie from the books. And a different guy, one with a suit and a very large camera, took a group photograph that was slowed down by the remote-control trigger for the camera just not working.

Also a something that I shall definitely be stealing for future panels like this: we got to writing down our names and web site presence --- Twitter, FurAffinity account, Telegram handle, whatever --- all on a sheet of paper and everyone took turns photographing that, so people didn't have to try writing it down themselves. It's a great idea. I still haven't looked up any of the people in my copy of the sheet. I don't think anyone else has looked up me.

We needed lunch. I proposed we go to that Indian place in the gas station across from the old con hotel.

bunny_hugger was skeptical, but I pointed out, it was only like fifteen minutes away. And so we went to the Dhaba place. We were glad to be there. And they were glad to see us again. They somehow remembered us, which is amazing considering we had been there one or two times, one weekend, for like three years running. And though we didn't get there in costume, and there hadn't been the usual crowd of people in costume all weekend. We gave them the sad news that the convention had moved, and only a few real die-hards like us would be getting over there. But I'm not sure how many people from the convention ever did go there. We always seemed to be the only people with their food, for all that we'd snag menus and talk them up in hospitality.

Also, at the Holiday Inn Express we used to use, at least one pair of nesting geese were back. The male was patrolling a different part of the parking lot but it was a reassuring bit of continuity with the past. We took lunch back to the convention hotel, to the con suite, and if people didn't envy our really good Indian lunch they must not have understood what was going on.

PS: And now to some of the handful of Ann Arbor things still open what with it being like 5:30 on a Saturday. 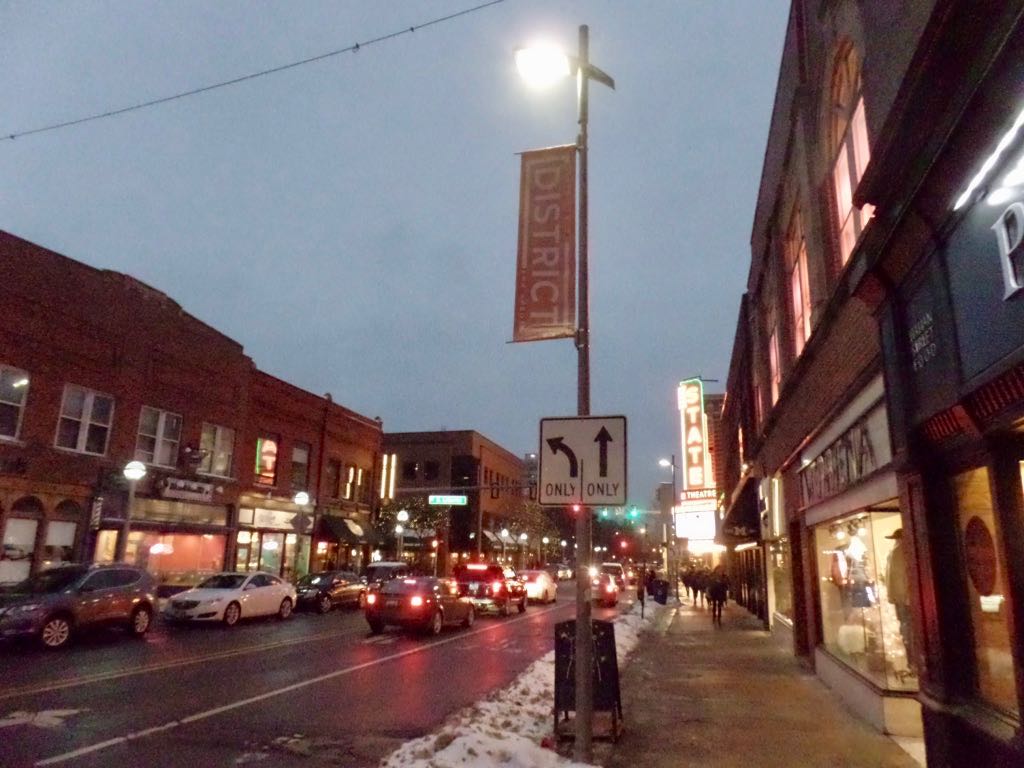 To other stuff in Ann Arbor. Here's a view of the State Theatre, then-under-renovation again, by twilight. 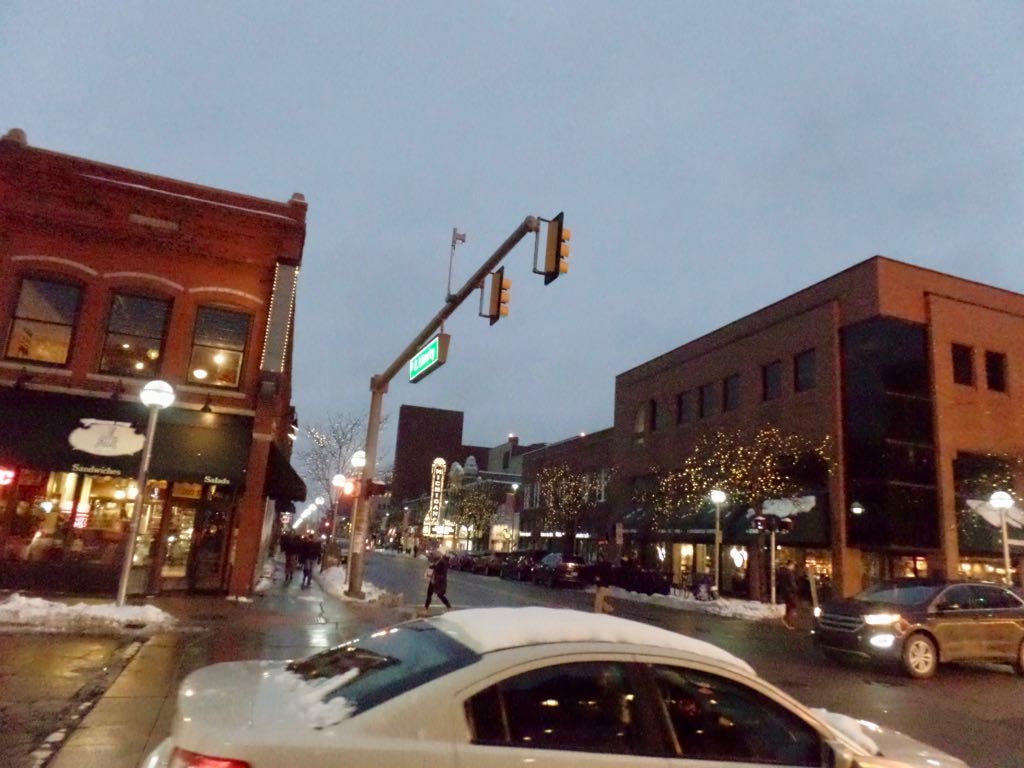 And peeking down the cross street where you can see the Michigan Theatre. Hardly seems fair that Ann Arbor has two old-fashioned sidewalk palace movie theaters and Lansing hasn't got any left. 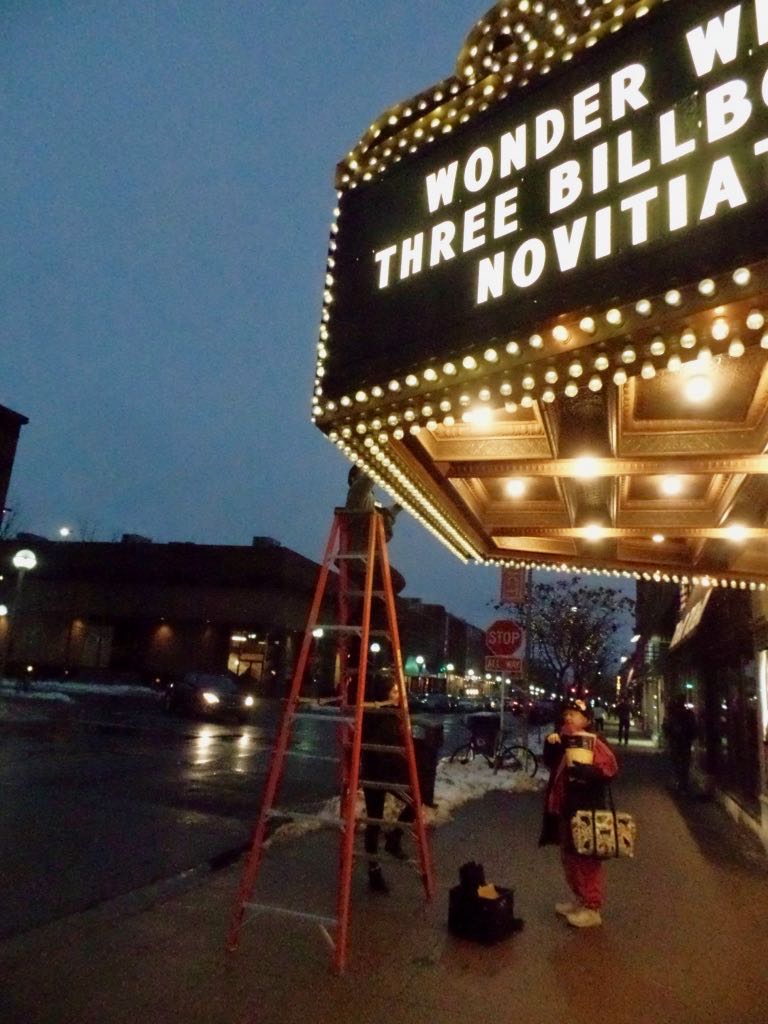 People changing the signboard over the Michigan Theatre. They were having a discussion of Woody Allen movies and asked us to name some, because ... I don't quite know. We just happened to be nearby is all.