I knew how sweet a kiss could be

I got back to

bunny_hugger; the line hadn't yet moved, and explained the fiasco. They finally opened the hospitality doors, letting people in for ice cream and dinner. The ice cream was set up before the dinner trays. It was two small scoops of ice cream a person, and they only had jelly as a topping, but one person did say, there were French toast sticks left over from breakfast, maybe there was maple syrup over by that? We were there for ice cream, but for some reason got some dinner food too, including, for me, from French toast sticks. I think mostly we wanted to show how we liked the vegetarian food being so well-stocked.

The convention activities were shrinking. We went upstairs, to the video game room, which

bunny_hugger hadn't really seen. I showed off the Atari 2600 Video Pinball, and also talked about one of the odd little beats of the night before, when someone was describing in great loving detail just how true to life so much of Ready Player One was. I think the movie, but I wasn't sure.

bunny_hugger beat me, two games to one, on video pinball before even that closed. We checked back in on the board game room --- we'd played some card games the night before, before the dance --- and headed out.

We did stop at the bathrooms, on the second floor. One was closed for cleaning. But they were both signed ``gender-neutral bathrooms'', something I didn't know they were doing this year. The first-floor bathrooms were still divided male and female. So we went in together, and that seemed all normal enough. ... You know, in like thirty years it's going to be so hard to explain why separate male and female bathrooms seemed like such a big deal back in the day. Kids are going to look at it like we look at how there used to be rules about who you took your hat off to and when.

Outside the bathroom was a TV screen scrolling hotel events and weather and news headlines. But it must have been the raw feed for AP or something. The headlines lacked useful context, like, what part of the ... country? State? Region? ... was having flash floods. Others were clearly the titles for editorial columns, so they came off as snarky quippy commentary on goodness-knows-what.

All that was still open for the con were hospitality and main events, getting ready for the dance. There was no karaoke this year, a shame, as Firr has been such a fantastic karaoke host the past couple years. But the dance started on time, and we joined that for a half-hour before setting out for

bunny_hugger to put her fursuit on. Then we walked around, giving her the chance to wave and greet people, all eager to see bunnies, before returning to the dance.

With, like, ten minutes left. The dance ended at 10 pm, not the expected midnight. She was barely started dancing in fursuit when the music stopped and they thanked everyone nad the lights came up. It hardly seems fair.

But there wasn't any disputing it either. So we did a couple further circuits of what was left of the convention --- hospitality and corridors --- including

bunny_hugger trying to draw on the paper table covers in hospitality. Then she went back to the empty Headless Lounge, to change out of suit and back into normal gear, while I noticed another abandoned plastic egg sitting out on a table somewhere. We walked around again, looking for people to say goodbye to, and then drove for home. Our listening: the end of the I Don't Even Own A Television bonus episode in which they review some issues of Archie Comics. We'd been listening to five- and ten-minute chunks of it while driving all weekend. Now do you understand the last bunch of subject lines? It's a thin thread but I had to go with something.

bunny_hugger's parents and pick up our rabbit. But

bunny_hugger was working Monday. I volunteered to go by myself, but her mother had an eye doctor's appointment Monday afternoon and she didn't want me to wait for that to be done. And if 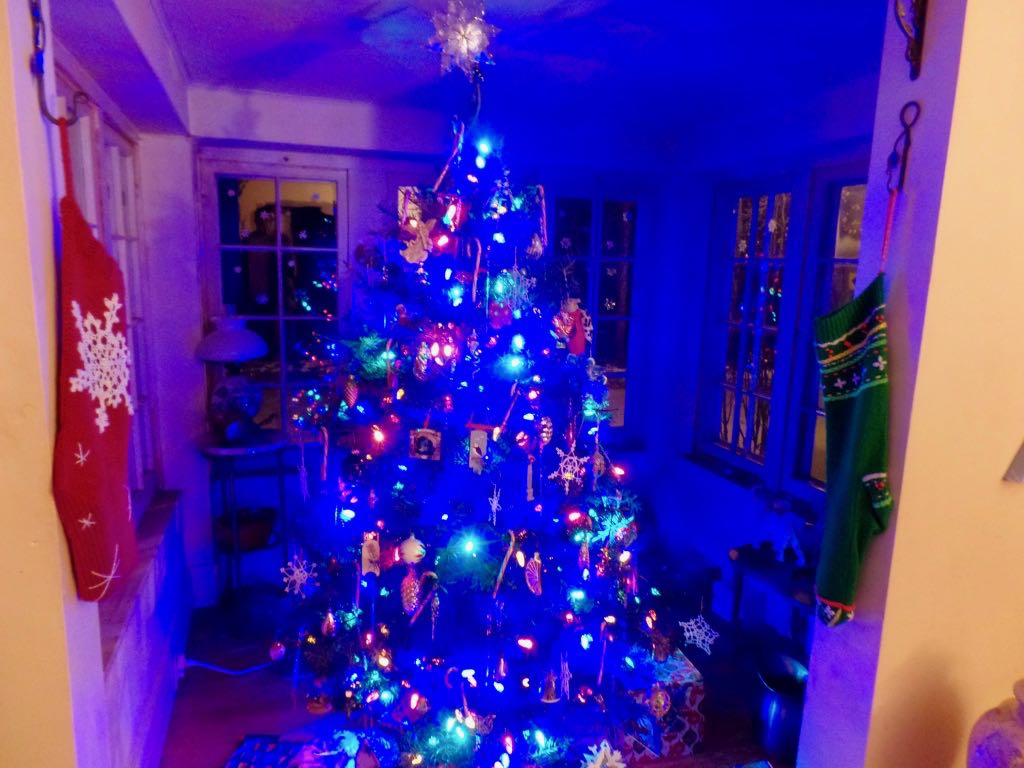 bunny_hugger's parents' Christmas tree, set up in the sun room now that there's a fireplace in the living room where it used to be. And it's not a bad spot for it, given how now you can walk around and decorate the whole thing. Some year we'll get to the Tannenbaum Farms early enough that her parents haven't already arrived and her father bought the first tree that he saw. 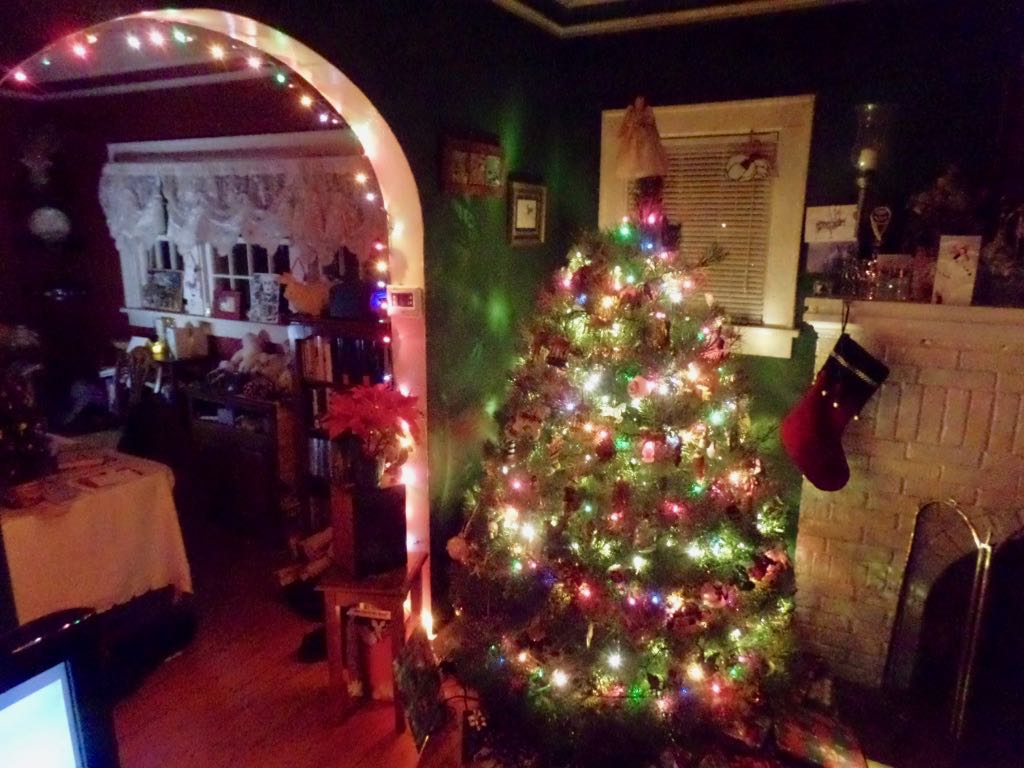 And then back home, our living room Christmas tree, plus the archway leading to the dining room. This was the first year we put both colored and white LED lights on the tree and the effect really worked out for us. 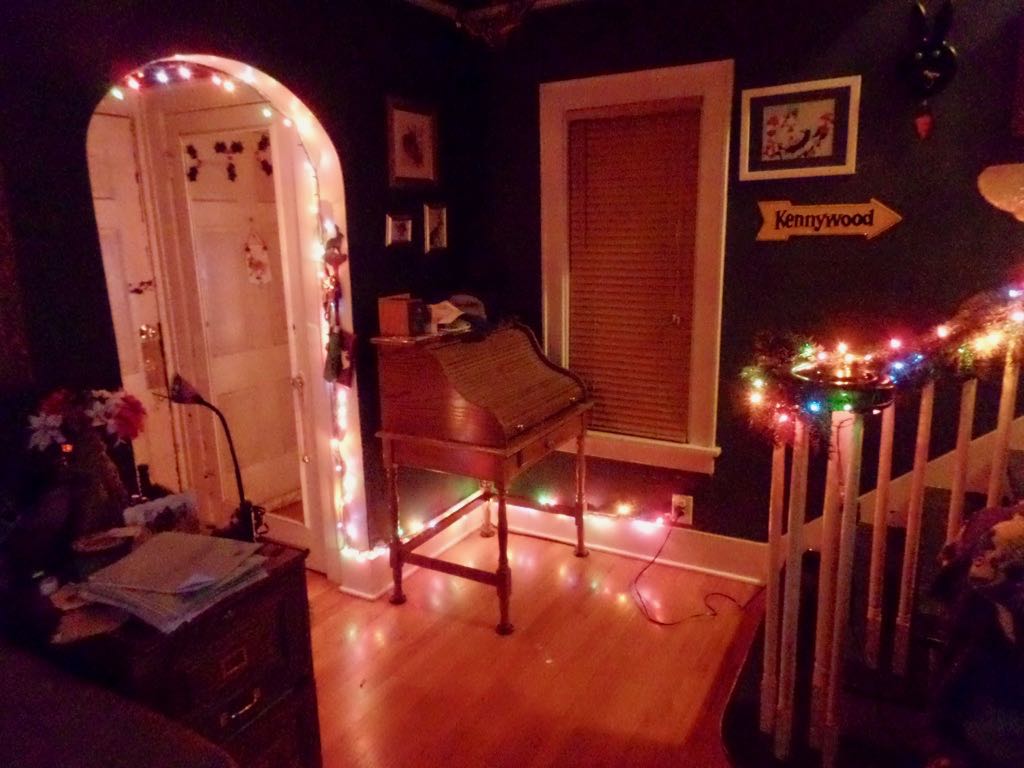 And the entrance and stairs, as illuminated. The Kennywood arrow doesn't point directly to Pittsburgh but rather, as it ought, to the highway you would use to start your Kennywood journey.