You're one of a kind, I can't explain it

The last weekend in April saw Michigan's biggest pinball tournament. Maybe in size. Certainly in importance. Pinball At The Zoo --- having its 20th year --- this year was back on the Stern Pro Circuit, formerly the PAPA circuit. (PAPA here being the Professional and Amateur Pinball Association, one of the two big pinball organizing bodies, and the one which organizes Pinburgh.) And by the way, think what that means: the convention started in 2000, when the last of the big pinball makers --- Bally/Williams and Sega (formerly Data East) --- had closed, and the lone new one --- Stern --- had yet to release a table. And kept at it through the wilderness years of the 2000s, and survived the environmental shifts of a growing, vibrant pinball market the past decade.

It speaks well for the convention --- which is, after all, a pinball show, dozens of people bringing and trading their machines and parts and all --- and for the tournament organizers --- AJH and PH, of our Fremont pinball points mine. With it comes visibility. And trouble. Specifically, it brings some of the best pinball players of the continent to the tournament. People with names you'd hear of if you ever heard of a pinball player, like, Keith Elwin, who won Pinburgh last year and is one of the people acclaimed as ``maybe the greatest pinball player of all time''. Or Steve Bowden, currently the 8th-highest-ranked player in the world. (Elwin is 4th.) Trent Augenstein, 6th-highest ranked. Derek Fugate, 95th-highest-ranked. They'd be playing. They'd be playing us.

The Pinball At The Zoo tournaments were Herb-style. That is, for a time, you put in scores on a set of tables. 12, in the main tournament; five, in classics. Four, in the daily tournaments. Your best score on each table is ranked against everyone else's. The best (six, for the main tournament; four, for classics, all four, for the daily) rankings are added together for your overall rank. At the end of the qualifying period, some set of players are put into finals. Pinball At The Zoo has symbolic significance to me; it was the first real major tournament to which

bunny_hugger and I went. I've managed to take second place in the B Division. I had always harbored the fantasy that I did well in the Classics division, pinball games from no later than the early 80s, but the record disagrees.

bunny_hugger went into the weekend fuming about how she never does as well as me, and how the out-of-state ringers would sink her slim chances.

But we had hopes too. For one, we would be able to go on Thursday this year. The day of the three-day tournament we always missed because of

bunny_hugger's work schedule would be open to us this year. Time is a weird semi-limited quantity in Herb-style tournaments. Only one person can play one table at one time, and the more chances there are to put in scores, the better your chance of the really good score that lifts you into playoffs. And Thursday, always the slowest day of the tournament, should offer the most chances to play. Still, the main tournament would be so tough. Even classics would be hard; you don't win Pinburgh if you stink on the electromechanical and early-solid-state tables that make up a classics bank.

But we had an alternative plan. The daily tournaments run by the same rules. But they're free to enter, which encourages everyone at the convention to put a try or two. The tournament games you have to pay to enter. So a great many people bring their International Flipper Pinball Association value to the tournament. And with one good game you can make playoffs. The tables are all electromechanicals or early solid states, so, everybody has a fair chance at the one really good game they need. But, as MWS pointed out, most serious players would dedicate their energy on the main tournament. We could focus on that and --- if you look at past years, get IFPA rating points pretty comparable to what you might realistically hope for in the main tournament. It promised to be a great opening.

The last thing to decide, in our plan for the weekend: do we stay in Kalamazoo? The advantage of staying in town would be that we wouldn't need the hourlong drive to and from the city each day we went. We would have to bring Sunshine back to

bunny_hugger's parents. But they'd take her happily. But ...

bunny_hugger's schedule had her teaching a class Friday. She'd have to miss at least a couple hours of the tournament Friday anyway. And more, it turned out: there was a department meeting she didn't feel she could skip. Any time she'd save Saturday morning not driving to Kalamazoo would be more than wiped out by how much longer her commute Friday would be.

And we had our Mi-Fi device. It had gone missing, by the devious trick of being exactly in my glove compartment where I had left it last August at the end of our Keweenaw Peninsula visit. We needed it, though. The tournament used the NeverDrains.com web site's virtual-queue system. It's invaluable for keeping track of where you are, and what you might best improve on. The Kalamazoo Expo Center doesn't have public wi-fi, and AJH and PH have been warned against letting the dealers' wi-fi passwords out to the public. So we needed some Internet of our own. You can ask scorekeepers to look up results and put you in queues, mind you, but that eats up time and especially on the last day it can make a difference. But I found the device, and loaded it with 3 Gigabytes of data for use over thirty days.

So we had our plan. We'd go to Kalamzoo on Thursday and Saturday. Maybe Friday, if it turned out either of us qualified for the Classics tournament, the first round of which was Friday night. But our real goal would be spamming the Daily tournament. And we would have to be brave: our standing at the end of Thursday would do nothing but erode as other people entered scores Friday. We might shore it up in the last few hours of Saturday morning, or on Friday if

bunny_hugger got home from work soon enough. But it would be tough.

Trivia: The Ferris Wheel of the 1893 Columbian Exposition was moved to Saint Louis and, on the 11th of May, 1906, dynamited, for scrap. Source: The Devil in the White City: Murder, Magic, and Madness at the Fair that Changed America, Erik Larson.

PS: Why I'll Say 1/x Is A Continuous Function And Why I'll Say It Isn't and yet I feel like I've answered the question fairly.

PPS: We did not have the Crossroads Village train car to ourselves; we just got on early is all. Here's the ride. 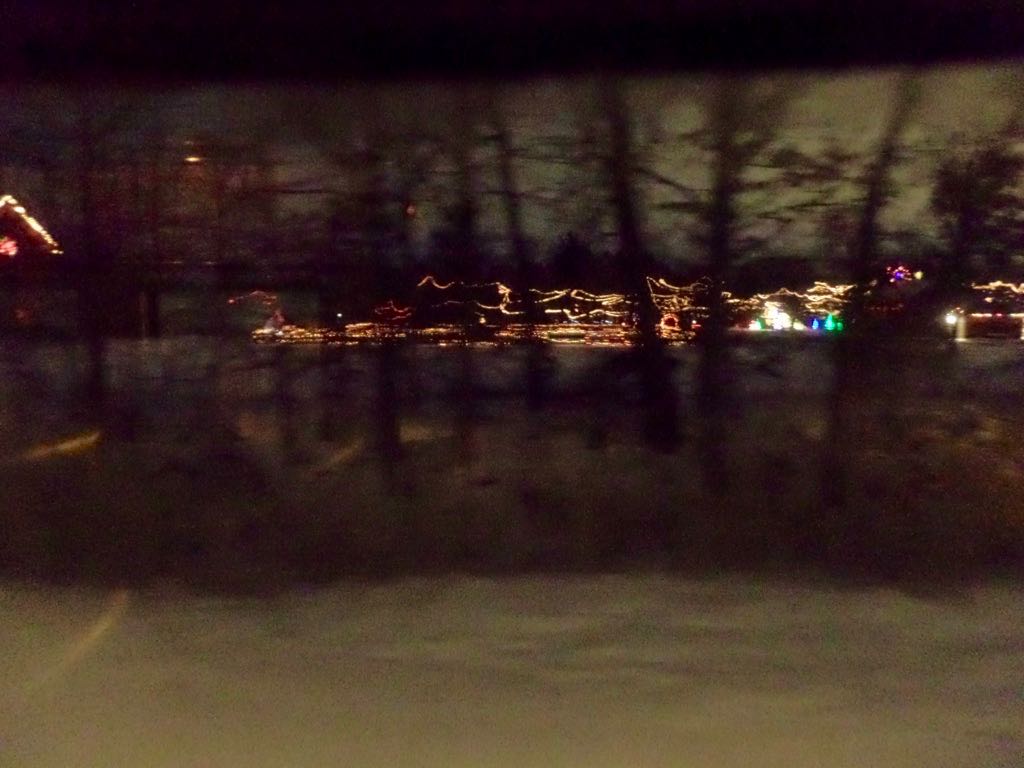 The train rumbling into action; in the far distance there, the Crossroads Village and its light fixtures huddle up against the setting sun. 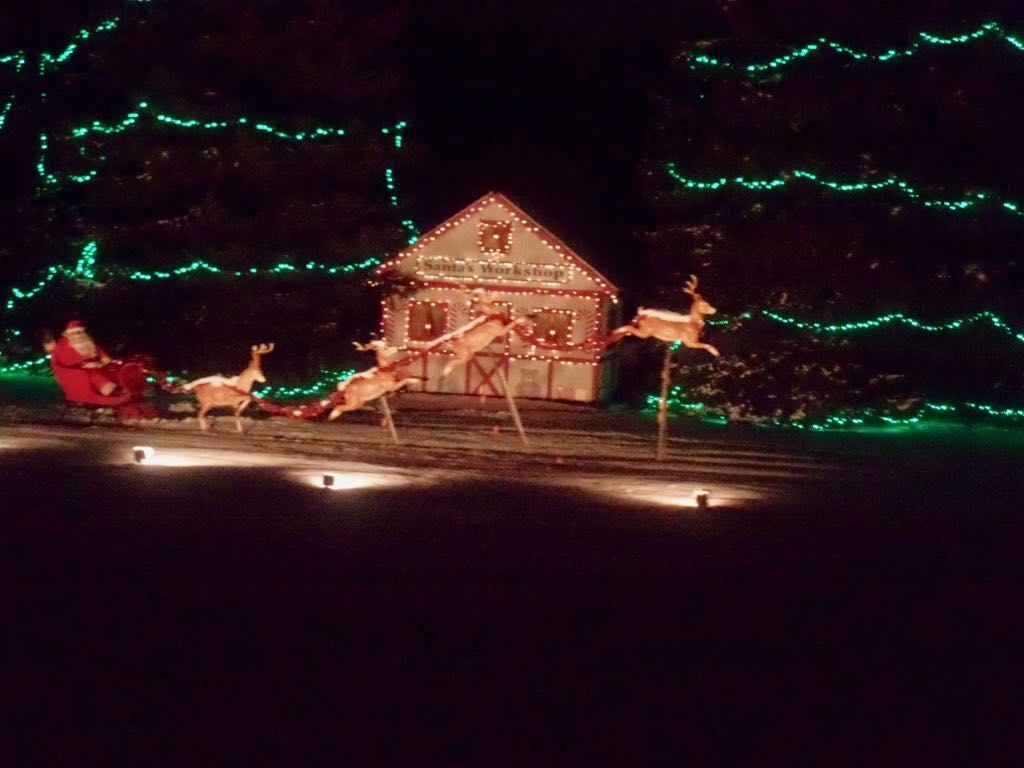 Santa's Workshop, featuring a real live Santa who waves both times the train passes, even if it's cold. I forget what the train conductor's spiel is about why Santa's doing practice runs like this the week after Christmas; maybe it's as simple as, well, there's always next year he has to be ready for. 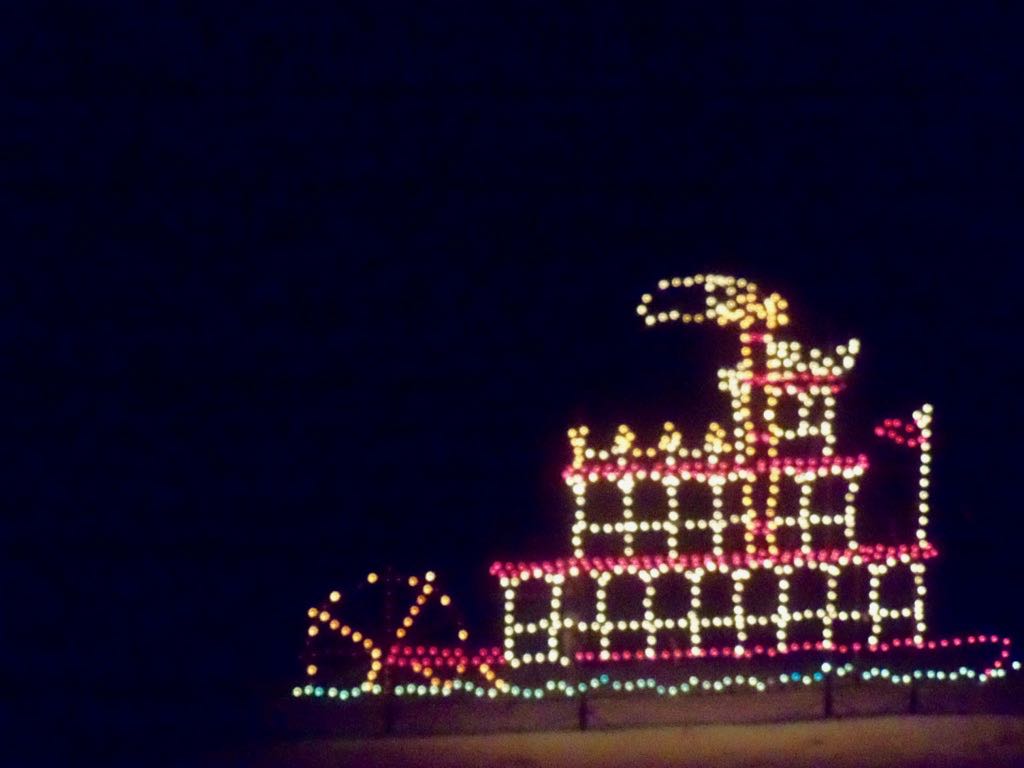 And an animated light representing the Genesee Bell river boat that putters along the lake in the summertime.