You're kind of cool, in a wonderful way

So we got to the Kalamazoo Expo Center mere minutes after Pinball At The Zoo started, 2 pm Thursday. There was already a crowd, a bunch of the people we know from Michigan Pinball. A lot of them were playing, or waiting for, the daily tournament games. The strategy MWS pointed out for reaping big points at a lower-intensity tournament was great. The trouble was everybody else knew it too. The plan was a good one. A first-place finish in the Thursday or Friday tournament would not be worth as much as the Main Tournament would, or even the Classics would. But it was worth about half as much, and could launch anyone into the state's top-ten.

I decided to let the daily tournament rest a while, and put in games on the twelve Main tables. Well, the eleven main tables. The newest pinball game, Stern's Black Knight: Sword of Rage, was so new they didn't even have one yet. It would arrive on Friday, and I'd have to play it on Saturday. And yes, it's a sequel to Williams's Black Knight (1980) and Black Knight 2000 (1989). We were excited to play it, obviously. And it's neat that Stern made a game that's ... well, it's not un-licensed, since they got the Black Knight rights from Williams Intellectual Property Licensing Corporation LLC GmbH Co Ltd. But it's a theme created by and for pinball games. We we had high hopes.

The main tournament, then. I took my usual strategy of put a game in on everything and hope for the best. Then build from whatever it seemed like I could build on. And, you know, there's the longstanding pinball superstition that playing cold, your first game in days or weeks or longer, will be fantastic. For me, my first game --- Eight Ball, an early solid state game I've played often at AJH and PH's games --- and had a ... mm. Mediocre game, but a fair one. Then on to Whirlwind, a late-solid-state game that's really challenging. And I put together a pretty solid game. Not my best-ever, but a rather good one, especially since I didn't get the multiballs going. I instead got in this groove where I hit the drop targets, for a half-million points a shot, and that was tolerably safe. Then on to the other games; a Fish Tales that started great and petered out. A mediocre Gilligan's Island, but that game is such a dice roll that that could plausibly be enough. Stars, an early solid-state, that I did nothing on. Laser Cue, another early solid state that came out pretty well. Mediocre World Cup Soccer. Lousy Spider-Man. Terrible Ghostbusters. Lousy Walking Dead. Pretty good Grand Prix. The result was after an hour of play, concentrating on the tournament games, I was officially listed as being in first place for the whole tournament! By virtue of almost nobody having put in games on all eleven available tables, but still. I kept screenshots of my temporarily very happy standing.

I made a round on the daily tables, and then another one, getting into a mediocre spot but one that maybe I could build on. Then went back to the main tournament, trying to get a Stars game that was any good. Incremental improvement on Spider-Man. Decent improvement on Eight Ball. I was no longer in first place, because people were actually competing, but I was still in the top ten.

We were undecided whether we'd make it to Classics. It would start on Friday and we might not want to make a third drive to Kalamazoo in a single weekend. But

I do not always have success in the Classics tournament at PatZ. In fact, I have never had success in the PatZ Classics. But I believed myself to be charmed in the PatZ Classics and so I felt betrayed that, for example, I put up a lousy game on Alien Star. And worse, Alien Star then went down, and despite many attempts would never be reliably working the right of the day. The Classics tournament was best-four-of-five games. This limited us to best-four-of-all-four.

I made several new attempts on the Daily tournament games, with mixed success. I get the 12th-highest score on Surf Champ, and 17th-highest on Torch. That would be marginal, if I matched those performances on the other two games. But I didn't; I finished 23rd on Big Indian, and a miserable 38th on Time Fantasy --- fifth-lowest score on the day --- and finish the day in 23rd place. The top eight went to finals.

bunny_hugger finished the daily tournament in 14th place --- the highest-placing woman, by the way --- but still, too low to get into the playoffs.

But the daily tournament, that didn't look too bad. I finished the day somewhere in the teens, overall. There would be many people entering scores Friday, many of them people who hadn't played at all yet. But with the top 24 making it ino the A Division --- and the next eight making it into the B Division --- it looked pretty sure that I'd somewhere in the finals. B Division would be great. I'd taken second place in B Division twice, although not in 2018. A Division would be magnificent.

bunny_hugger's position I remember less clearly. She was lower-ranked, but she had played fewer of the main tournament games. She had worked more on the Classics/Women's games, for one. And put in many more games for the Daily tournament, which is part of why she finished so far above me. We might or might not get back Friday. But with the morning of Saturday to shore up scores she had good reason to think she'd make the playoffs, although she refused to think so.

And an important side point: the people who bring all the exotic sodas to the convention were there, as always. So I was able to get some Moxie. (They didn't have diet.)

Trivia: A 1790 voting act in New Jersey specifically used the terms ``he'' and ``she'' in reference to voters in the state's southern counties. (This would be the half the state with a significant Quaker population, a community more accepting of women's rights than the norm.) Source: New Jersey: A History of the Garden State, Editors Maxine N Lurie, Richard Veit.

PS: The Crossroads Village train continues its job of running past light displays! 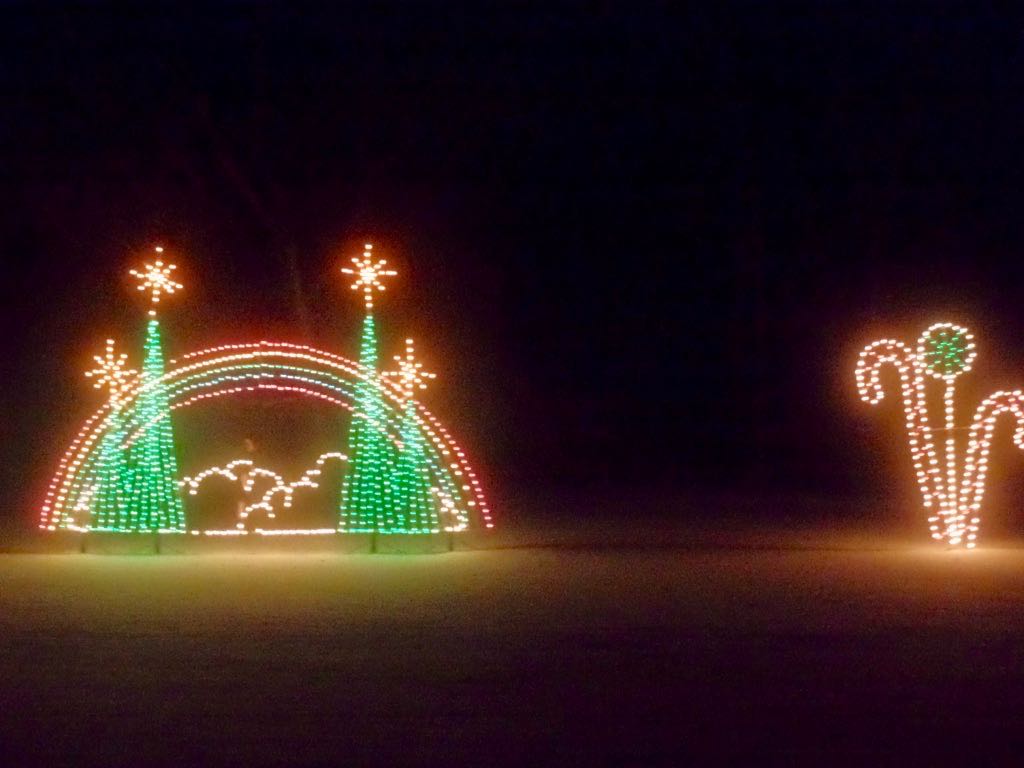 Ooh, hey! My camera did very well focusing on these lights of candy-cane trees and your traditional Christmas ... rainbow. 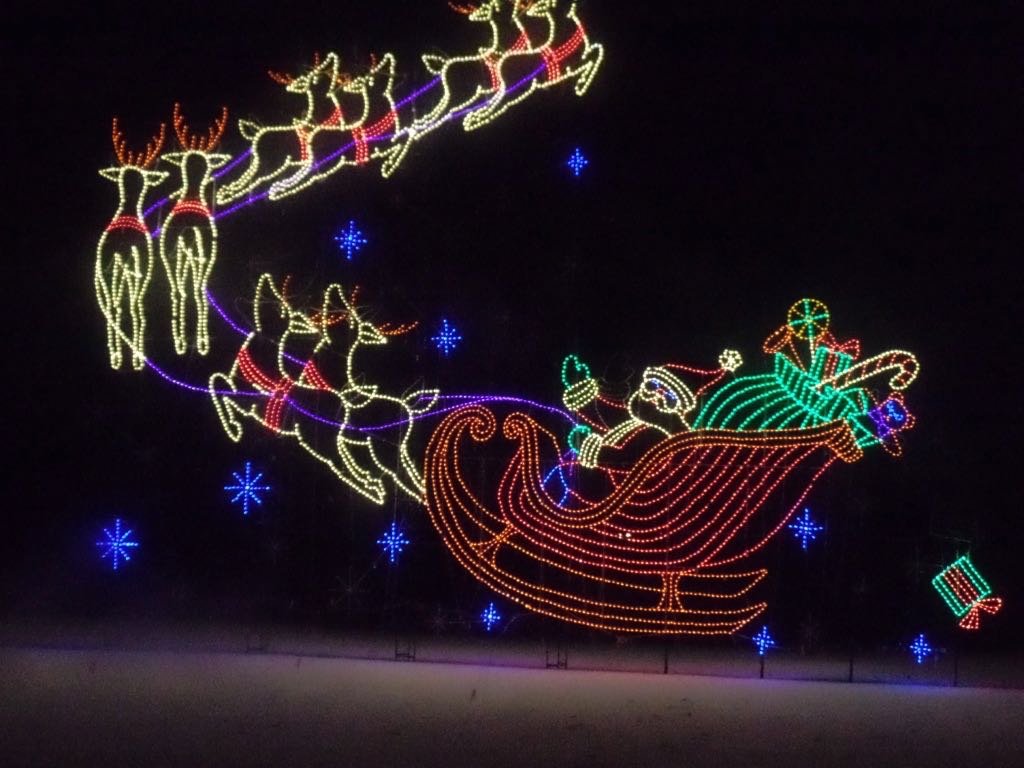 And another pretty good snap of Santa taking off. Notice the package falling out of his sleigh, part of the animation. You can maybe make out the lights that come on to make Santa wave. 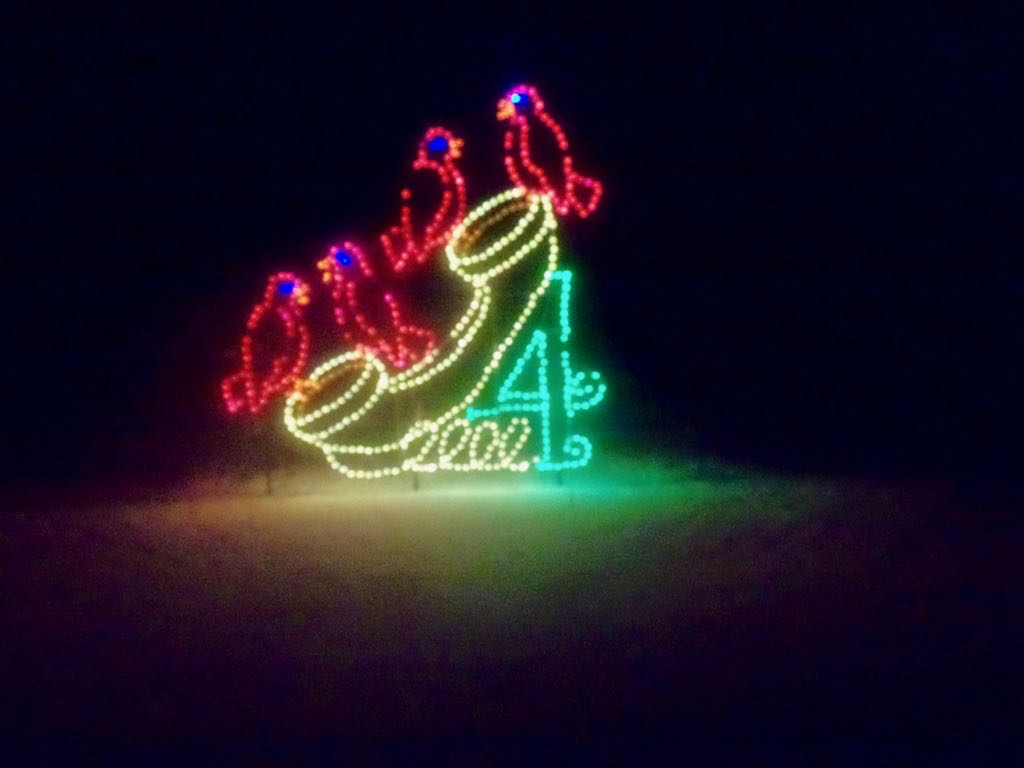 Part of the vast Twelve Days of Christmas loop: a funny interpretation of ``four calling birds'' that's as good as any because nobody actually has a clear idea what a ``calling bird'' is supposed to be.