Who better than me to set you on your way

There's two advantages being top-seeded in a pinball tournament gets you. One is a bye through a round. That wouldn't happen in B Division. The other advantage is getting to pick the games on which the group plays. But AJH and PH, wanting to keep the many groups --- six playing at one time, when A and B Divisions were accounted for, at least through semifinals --- from all waiting for the same table. And, as a pinball tournament gets bigger, it tends to want the winner to have to show prowess on a range of games. Pinburgh, for example, makes (roughly) every bank include a modern game, an electromechanical, an early-solid-state, and a late-solid-state game. The winner has to do all right on every kind of pinball game there is.

So AJH and PH set up a banks format. The top seed in any group got to pick a course of three games that they'd play. The banks would be played in a set order, and no group could pick a bank already being played. This would avoid any group having to wait. And while the banks weren't perfectly balanced --- there'd be some with two modern-era games, like Ghostbusters and Fish Tales, or two solid-state games like Whirlwind and Laser Cue --- it was a bit more spread out. So

bunny_hugger could pick her favorite tables.

Except that the four groups of the A Division got to pick banks first. And EJO, being on-tiebreaker higher tan

bunny_hugger got to pick first too. There were, I think, nine banks and she had to pick one of the four dregs. She chose the one with Black Knight: Swords of Rage, Laser Cue, and World Cup Soccer. World Cup Soccer is an old friend. Laser Cue was suddenly being a new friend. Black Knight nobody knew anything about, but she'd had nothing but decent games in qualifying. That could be plenty.

She put up a lousy game of Black Knight. Like, as bad as I had done. First time she flopped on that table. SCS, who we play with sometimes in Grand Rapids and in Fremont, did marginally better. CON, who I don't think we've met before, doubled either score. BIL put up an honestly decent game, coming in at just over 26 million. He had won when got ten million points, but was caught in one of those modes that hides other players' scores so he had no responsible choice but to keep playing until that ended and he could check he'd won.

bunny_hugger had a last-place finish and was feeling miserable.

She felt worse after starting Laser Cue, having a lousy ball, and then remembering: this is BIL's table.. Not, like, he owns another of this table and so knows all the rules and best strategies. He owns specifically this literal machine, and brought it from his basement to the show two days before, and while it might be set up a little different from how he'd play it at home, he's played it all he could possibly want. She had another lousy ball and looked at a last-place finish again, which would knock her out of finals.

bunny_hugger that she's not a lousy player, that nobody thinks she's a lousy player, and that she's under-rating herself as a player. And that she can win this yet. All right, but how? First, I told her, go to the bathroom and wash her hands. Wash those lousy balls off her. And, mercifully, she took my instruction, making the long walk down the hall to the bathroom, and coming back with her head in a different space. I asked what she thought had gone wrong. She said she never had control of the ball. I aske what was something she could do this ball to prove she had control of it. She picked something and I told her, go do that.

bunny_hugger was at like 20,000, so catching that --- and beating whatever he might put up on his last ball --- seemed unlikely. But everyone else had mediocre scores too; she could take second place easily. And she found her I'm-in-control shot, and kept working it. finishing at 92,450.

bunny_hugger and pointed out how she was not last, this game. CON started his game, from a tiny bit above where

bunny_hugger had, and he didn't play great, but he played good enough to get very worrying. He drained maybe 20,000 points below

bunny_hugger's score, but the bonus had yet to count up. It did. It ended.

bunny_hugger was still in the running. SCS, with a third and a last, was basically knocked out. BIL, with two firsts, was guaranteed to move on. If CON beat

bunny_hugger he would move on. If

bunny_hugger took first place, or beat CON by at least two positions --- she had second while he had fourth, or she had first while he had third --- she'd move on. If

bunny_hugger did not, she wouldn't. The game was World Cup Soccer.

She had a lousy first ball and felt despair creeping in again. She wouldn't go wsh her hands again, but I did ask what simple shot she could be sure she made, to get back in control. And she did the important one, getting multiball going. Multiball in World Cup Soccer is this routine: shoot the goal target in the way back of the playfield, for a jackpot. Then shoot either ramp to relight the jackpot. Once per multiball, you can relight the jackpot by jabbing the 'Buy Extra Ball' button too. BIL looked over her playing and asked me if she remembered that. I was sure she had, and had already used her jackpot relight.

bunny_hugger were going to finals.

Trivia: The Encyclopedia Britannia was owned by Sears, Roebuck, briefly. Source: Know-It-All, A J Jacobs. (This was from 1920 through 1922.) 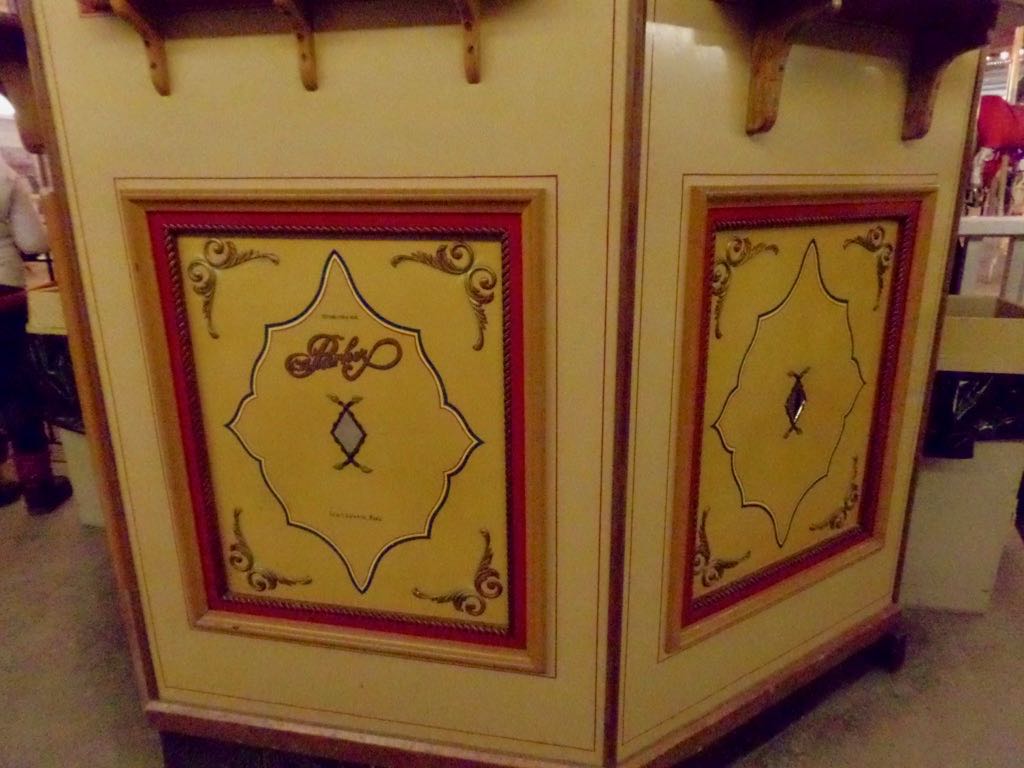 Close up of the band organ attached to the carousel. It's not ornate, but this model carousel --- designed to be mobile --- would have problems with too-ornate an organ. 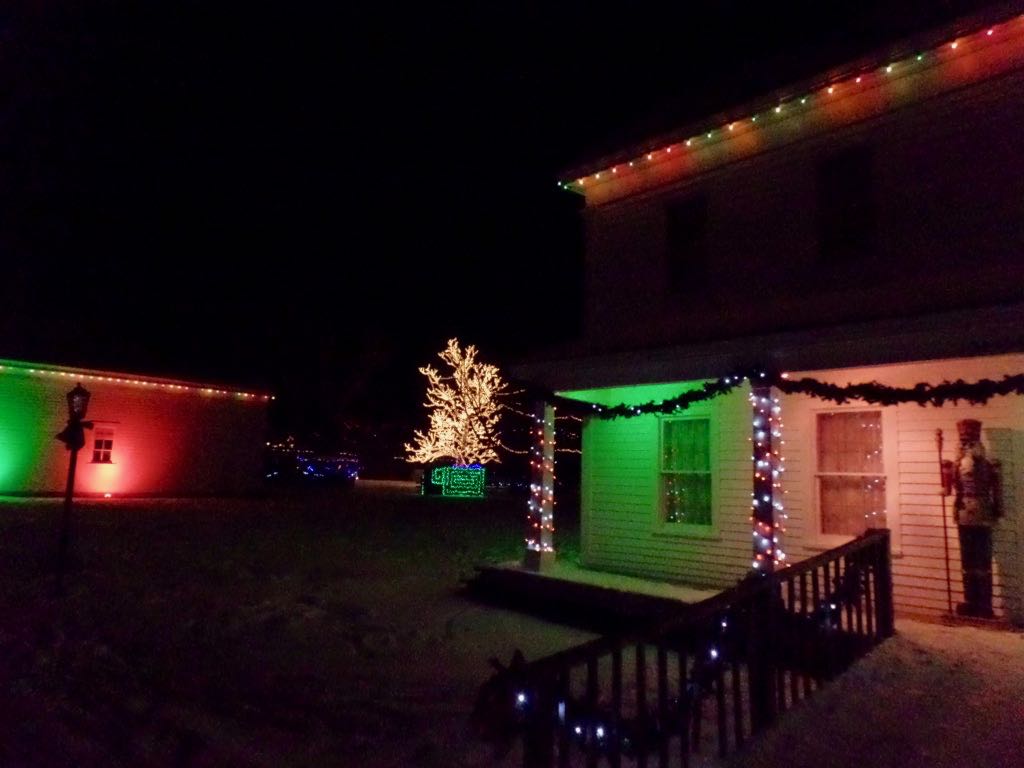 Getting back to the main village. Here are some of the 19th-century buildings in 21st-century illumination. In the far back is the tree that they go all out to light up. 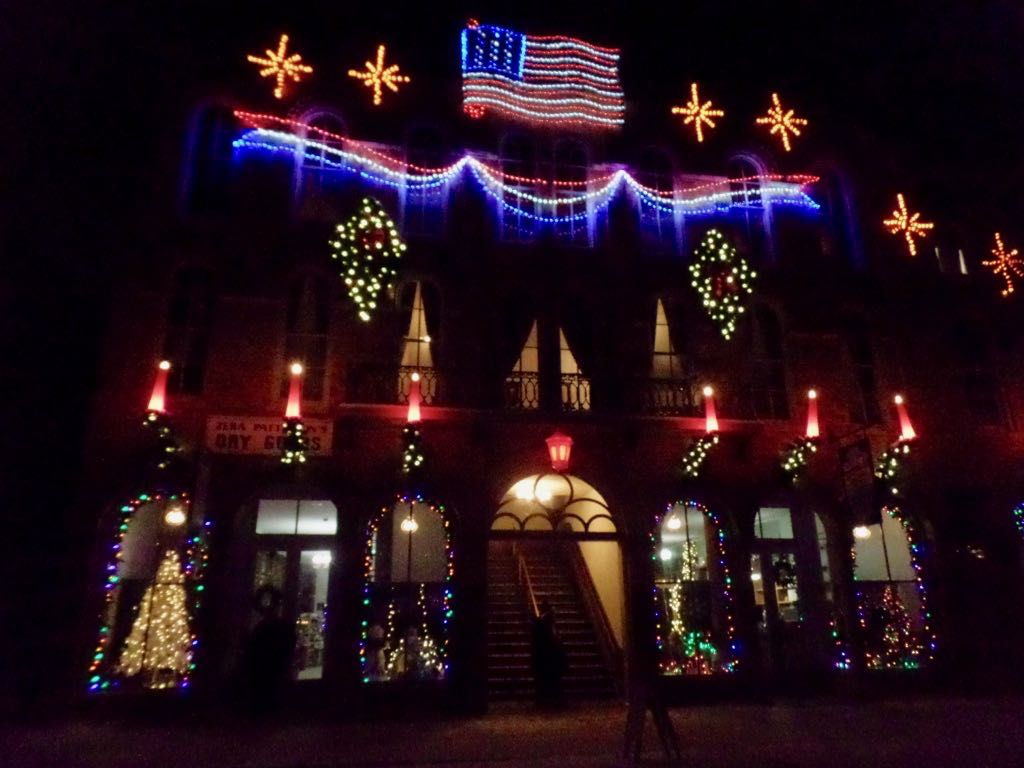 The opera house, the most prominent building in town and where the gift shops (left and right) are, as well as (center) the stairs up to the performing hall.