Struggling along for years and years

bunny_hugger gets to pick again, and chooses the bank with Eight-Ball, Grand Prix, and Spider-Man. She doesn't care for Spider-Man, but the first two games, a solid-state and an electromechanical, play to her strengths. She's first player again, and puts up 114,730, a solid but beatable score. BP, one of those out-of-staters (he's from Columbus, Ohio, best I can figure) puts up 42,550. MJV, a friend we only get to actually see when we're at Chesterfield, basically, puts up 56,900. And BIL just puts up nothing, a 37,830 finish.

bunny_hugger has a first-place finish. It's a great start. Takes a lot of pressure off. And the next game is Grand Prix, an electromechanical that she always likes even when she isn't having a good game.

She has a lousy game. Grand Prix, like most electromechanicals, gives five balls to play. It gives five balls because it's easy to have a house ball, one that just rockets out of play with no chance to do anything about it. (Modern games compensate for this, some with better design, some with ball saves that take the sting off.) She never gets anything going, and puts up 164,000 points, for last place. BP has 282,830, a third-place finish. MJV just squeaks him out, 286,490 points. BIL has a 370,100 point finish.

Going into the final game,

bunny_hugger, MJV, and BIL are all tied, and BP still isn't out. It's literally possible for anyone to finish in any position. And the game is to be Spider-Man. Which is on the hard settings, and has the shorter-than-standard flippers, and which has been creaming everybody all weekend.

BIL is guaranteed to take first place in the B Division now. If he wins this game, then

bunny_hugger takes second place. If he finishes behind

bunny_hugger's 10-million, then she ties for second with BP and goes to a tiebreaker match. If he finishes above

bunny_hugger but behind BP, then she takes third place.

He built his score gradually, despite me and

bunny_hugger hoping he drained fast. Then he got past that 10,172,640 and our attitudes switched. He was in what we regard as the danger zone, and we just wanted him to rocket through the two million more points he needed. He had a mode going, which was great, since a few shots could get him past that. And he did, although the mode was obscuring his score so we couldn't see it for a while. He finished at 15,754,320, taking another first-place finish on a table. BIL was first-place finisher at the B Division, Pinball at the Zoo.

This is, by the way, as good a finish as I had ever done at Pinball At The Zoo, and that was years it wasn't a circuit event and so the competition level was much less intense.

MJV and BP ended up tied for third, and had to hold a tiebreaker. This was delayed some as MJV, I believe thinking he had finished last altogether, had wandered off somewhere. But they eventually got back together, for a game of Fish Tales where MJV put up 63,456,830 to BP's 67,242,060.

Besides taking home a trophy --- well, a plaque, with a nice big star on the center --- she got her pick of Stern pinball translites. These are the art on the backglass. These included a couple of Iron Maiden translites, which are in demand because the game is new and exciting still, and it is pretty stylish especially if you like the band. Plus, Keith Elwin, who designed the game, was there and would likely sign the thing. (Elwin, already a top-ranked player, designed the table for himself, to make his own game. People loved the feel of the the thing, and Stern hired him to turn this into a production run game, just like happens in your fantasies about having someone come up to you with a dump truck full of money to do the thing you have fun doing.)

bunny_hugger followed her own muse, going for what she personally enjoyed more, and took a translite for Monopoly. This is a game Stern released in the early 2000s, when they were apparently picking licenses at random. But it's also a game that she finally came around to liking. She had to get familiar with its layout, and with the way it worked. The key was realizing it was designed by Pat Lawlor, who also designed FunHouse and many other tables, all of which enjoy certain commonalities of grammar. By this I mean a little upper flipper that feeds to a side ramp for the jackpot. So she picked out the translite for this relatively unloved game and called out ``Pat Lawlor FTW!'' and then worried that Keith Elwin might have overheard her and felt hurt by this. (I cannot imagine a serious pinball player not sympathizing with a pro-Pat-Lawlor comment, though. It'd be like ragging someone in a 60s music group for liking the Beach Boys.) I offer this paragraph if you need to understand

Trivia: When the Rural Electrification Administration formed in 1935, about two farms in ten in the United States had electricity. In 1945 about eight in ten did. Source: An Empire of Wealth: The Epic History of American Economic Power, John Steele Gordon.

PS: And here's a couple pictures of the Silver Balls in the City tournament from 2017. I didn't win. 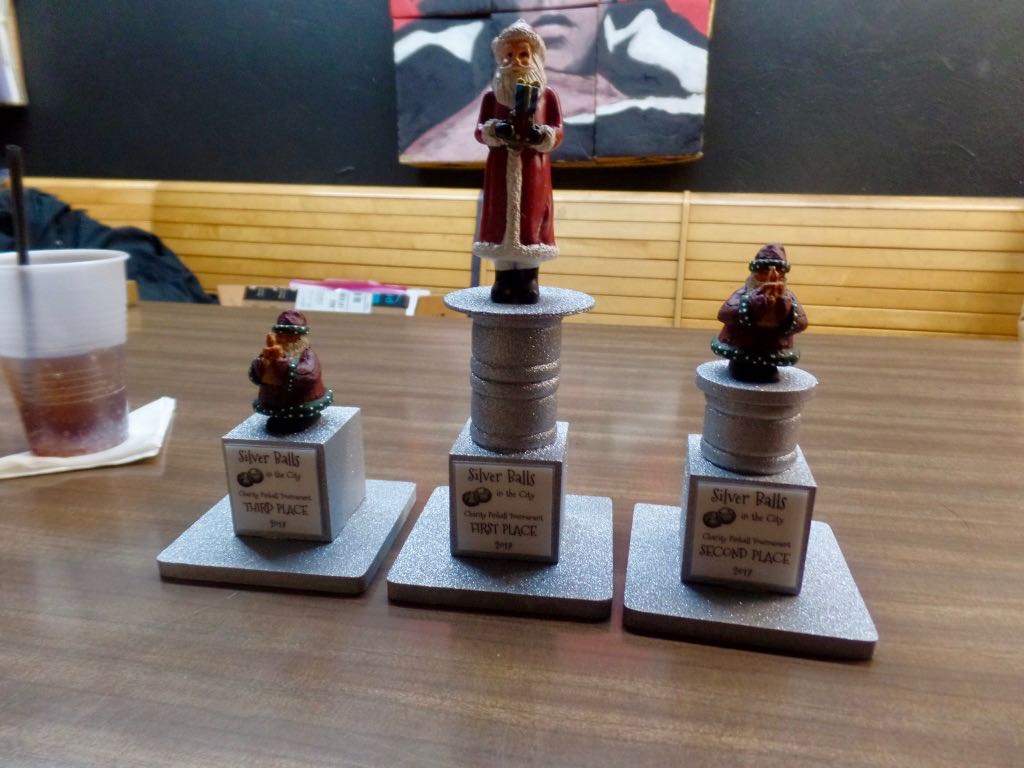 Why we play: the trophies

bunny_hugger made, using Christmas decorations from Michael's and maybe the knick-nack sale at Crossroads Village, plus some sparkle-painted wood blocks and stuff. She these days prefers to make four trophies, since most of the tournaments she organizes end with four-player groups. But Silver Balls, as a head-to-head strikes tournament, had no reason to end in a four-player group, so she settled for the less taxing trophy-making project. 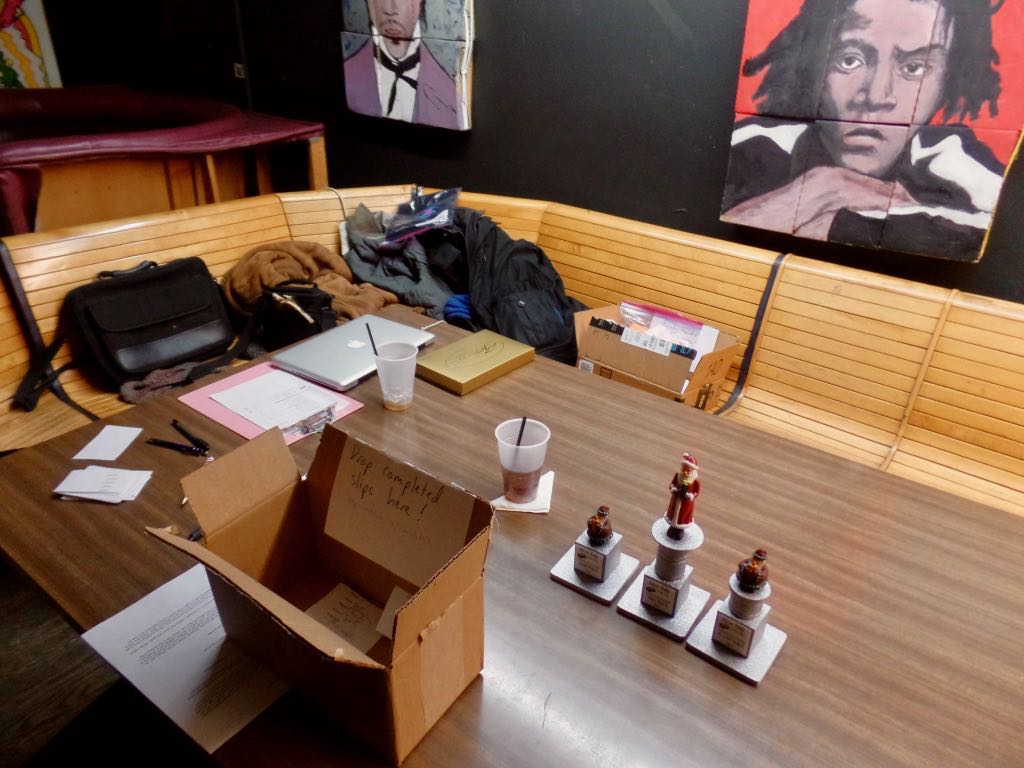 What a pinball tournament looks like, administrative side: the trophies, the box into which we dropped off the results of matches, the official rule sheets in case

bunny_hugger has to make a depressing ruling and wants the authority of the printed rules to back her up, score sheets, a clipboard, and miscellaneous other stuff. 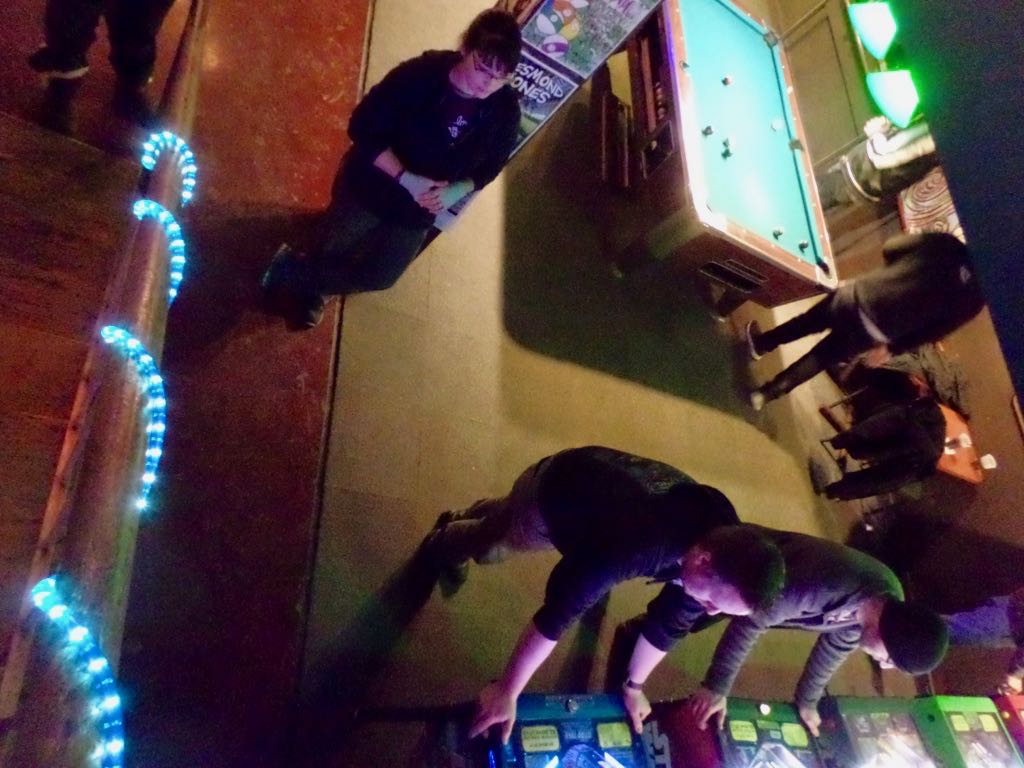 What a pinball tournament looks like, player side: a late-round match on Star Trek. At the time the Star Trek pinball game was next to the Star Wars game, but they've since been moved to different areas of the bar so that they don't fight. 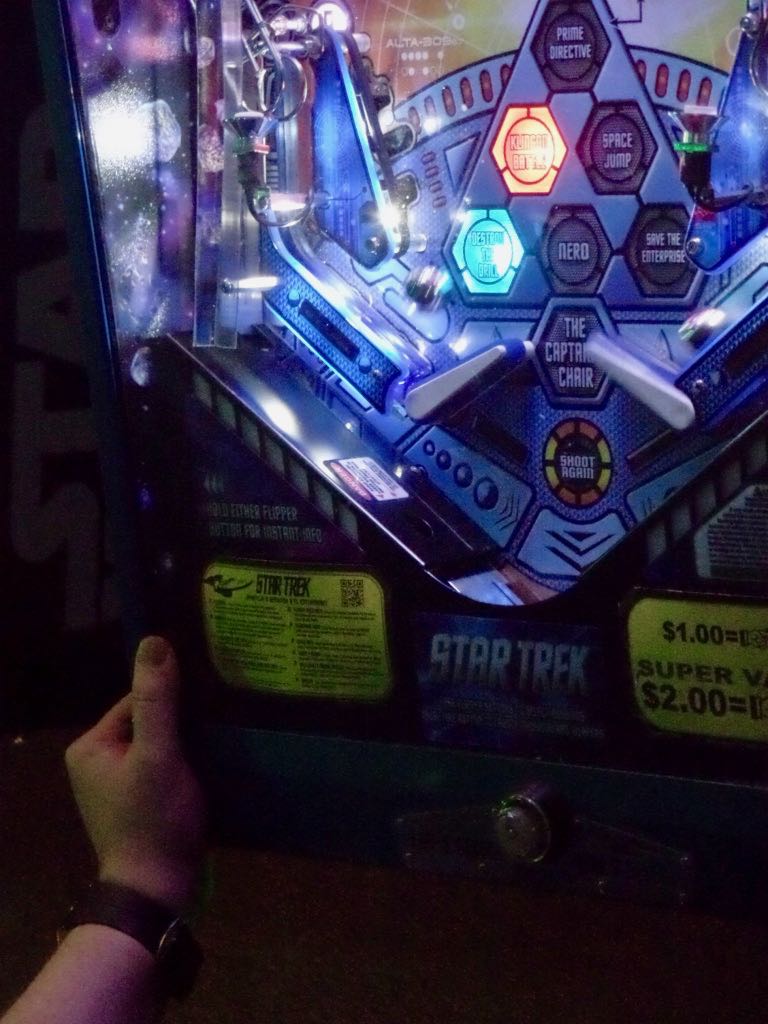 Bonus little picture since I tried taking action shots of pinball games: here's multiball. Do you see all three of the balls in motion here?