It won't be long

So our first big event after Pinball At The Zoo was ... well, another pinball event. The VFW Ann Arbor Pinball Hall Of Fame annual show. Once again we got tickets for Friday evening, the 4-to-10-pm show. We might not be able to do that again: rumor is the guy who owns the place wants next year's to be Saturday and Sunday alone. Why cut back on the few days the place is (or even can be) open to the public, when it's always extremely popular, to the point that tickets reliably sell out? ... Nobody's really sure, although it's hard not to get the vibe that the guy who owns the collection doesn't really like having all these strangers in messing up his games. There was a tournament before the show started, but we didn't join that. For one,

bunny_hugger still had classes in the early afternoon. For another, it was some ridiculously large entry fee that, as I understand it, was neither for charity nor paid out to winners. It's how you hold a tournament while not really wanting anyone there.

Still, the show draws a lot of attendees, including pinball vendors showing off their latest. There were three Black Knight: Sword of Rage tables, one of them the plain vanilla kind played at Pinball At The Zoo, and two the more deluxe models with an upper playfield. This was our chance to try the game again, before it comes to every pinball venue around us, and maybe even hear more than the bass of the music.

Also present: one of Jersey Jack's newest tables, Willie Wonka and the Chocolate Factory. I'm not sure if the game rules are finalized (as far as game rules are ever final, anymore; it's now easy to patch the software in a pinball game, so it's easy to ship a partially complete game and trust you'll fix it after the fact). But it's bright and colorful just as you'd imagine the theme would be, and there's several lovely and weird shots to make, and already neat clips from the movie for various modes. Nobody got the Wonkavator multiball started but that looks like it should be great fun. We never did see anyone tilt a ball, but we've all got an idea what clip from the movie they've got to use when that event occurs.

We met up with MWS, of course, as well as some Lansing League regulars like RED and GCB and all. We led RED and GCB to Class Of 1812, to hear the multiball music, which goes into the 1812 Overture Done As Chicken Clucking, part of the game's weird-era Gottleib weirdness. RED opened the game's coinbox door --- something anyone can do, but which is against the rules and can get you kicked out --- to turn the volume up to ``earth-shattering'' so we, and everyone in the room, could hear it. Which was great, mind you, and which everyone liked. For a while. RED opened the box again to turn the sound down when one of the event staff came over. RED told them, ``I was turning the sound down'' without mentioning his part in turning the sound up, and was thanked for this good deed. Then he held up a pack of Mentos and smiled at the camera.

bunny_hugger and I would go looking largely for the older, weirder games. There were some wonderful new selections available. Particularly, there were a bunch of pure-mechanical games, pre-war pinball machines, from the era before there were flippers. There was just a shooter lane, a ball, and the fact you could tap on a machine to nudge it a little. Where the ball ended up guided your score. Some of them were great and I felt almost an instant expert, such as Bally's 1933 Airway, where there's ten airplanes labelled different cities, and a scoop for a ball to land in each one. In my best game I got balls in seven of the ten city-planes.

Others had me stumped, though. They had a 1934 Rube Gross and Company Torpedo, a naval-war-themed game. But the pins --- actual nails in the wood --- seem to close off all but two of the scoring holes. Even GRV, who knows every rule to every game ever, couldn't see how any of the rest even came into play. There are some dirigibles that hide the openings to tunnels, but he got a ball into one of them and it just returned to the shooter lane. So how does this game work? I don't know. Rube Gross and Company was active from September 1934 to sometime in 1935 and made three games, according to the Internet Pinball Database.

One little frustrating bit. I was having my best-ever game of Quicksilver, an early solid state game with a melty-character theme. My last ball, though, didn't kick into the plunger lane. This is a really simple fix --- open the coin box door and push the solenoid that kicks the ball out --- but, of course, non-staff opening the coin box door are subject to expulsion. I asked the first staffer who was nearby, an older man who was going around polishing table. He didn't seem to know what to do, or to follow what exactly the problem was, and in trying to fix it he lifted up the playfield, and reset the game, and eventually turned off the game. Well, two outstanding balls is still something.

The VFW has a Seawitch, too. This is an early-80s game with playfield adapted to be the new Beatles game. Beatles rapidly became one of my favorite pinball games, something I just have a complete understanding of the flow for and all the major shots and what to do. This was the first time I'd seen Seawitch since the Beatles came out, and I wanted to see how they compared. It turns out if you play Seawitch as though it were the Beatles table, you have a pretty good Seawitch game. In particular, the way the drop targets build your bonus multiplier, how the bonus multiplier carries over, and how you earn an extra ball are the same on Seawitch as on Beatles. So that's fun to know, in case it ever turns up.

We didn't really have enough time, but we never do at the VFW. Maybe next year, when --- if rumor pans out --- we'll probably get the Saturday ticket, 10-to-10. Saturdays are reportedly always packed, but there are a lot of games there, and twice as many hours wouldn't hurt.

Trivia: In 1755 --- before the declaration of what would be the Seven Years' War --- British sailors captured three hundred French merchantmen, taking something like $6 million in prizes. Source: The First Salute: A View of the American Revolution, Barbara W Tuchman. 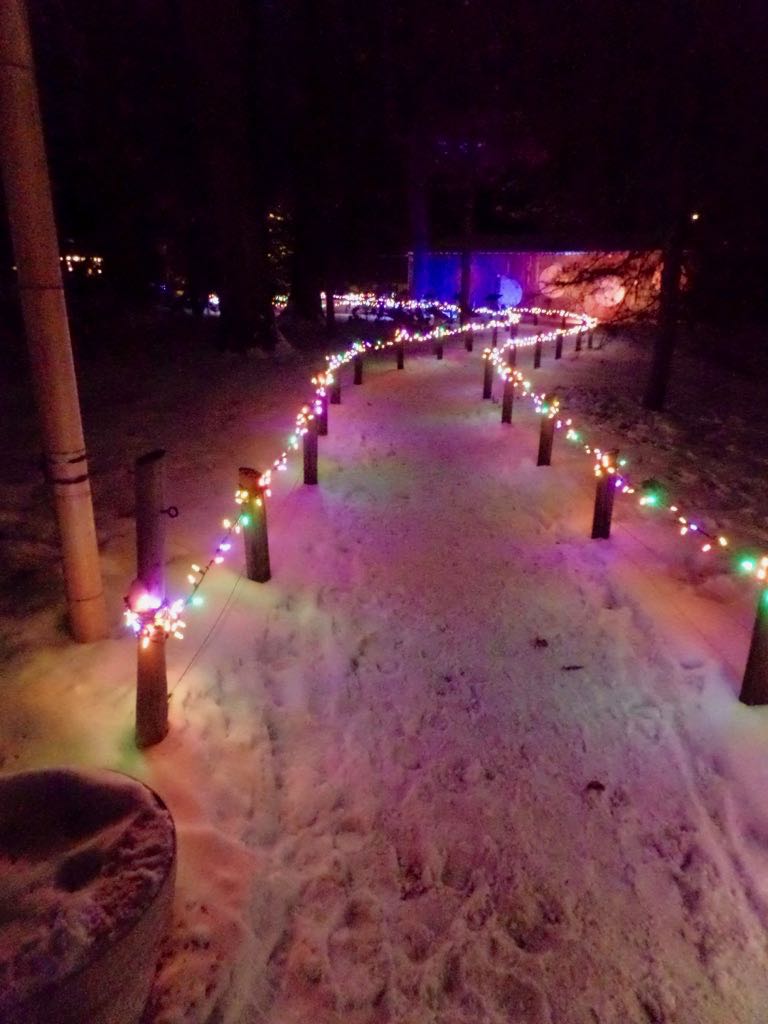 Light-lined sidewalk that's got the day's fresh snow on it. December 2017 was a snowy time in Lansing, which is great for night pictures and a little less great for walking around in. 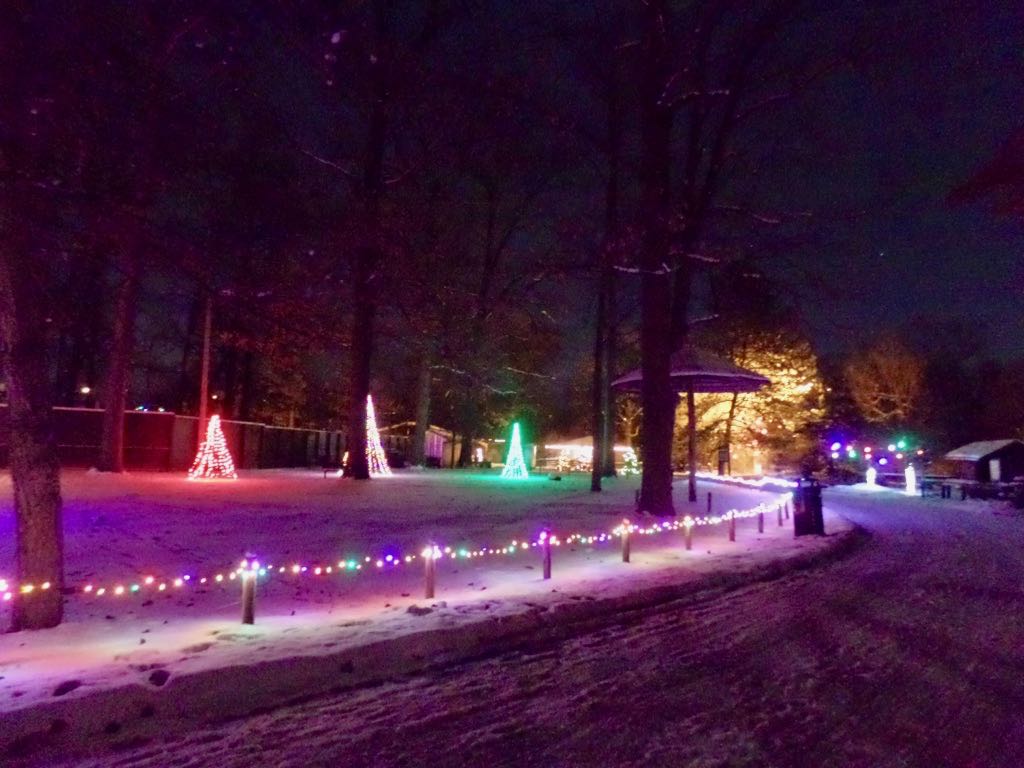 Nice long arc on the sidewalk with a bunch of Christmas trees. I like how the trees are lit from beneath and you can see the darkness of the sky. 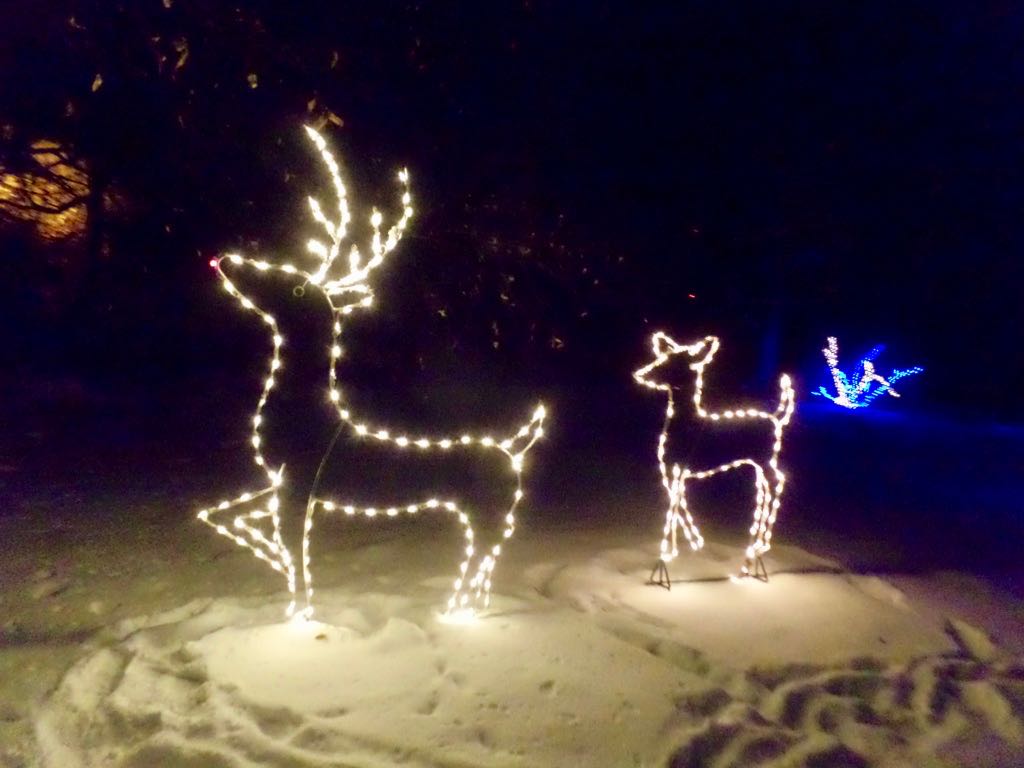 These were not animated reindeer lights, but I liked the way the picture came out anyway.