Baby you can drive my car

We didn't want to have a garage sale last Saturday. Our experiences have been, at best, mildly unpleasant. We get up too early, it's too chilly, it's damp, we sell almost nothing, and we raise enough to buy the pizza that consoles ourselves, and that's it.

bunny_hugger's father has the idea that garage sales are great and we love them and that we were putting off having one just because our schedule was too busy. We had one set, and then wanted to put it off because we hate having them and it turned out MJS, with the pole barn full of pinball machines (as seen in the New Year's Eve 2017-18 pictures yesterday) was having a tournament. He has one or two a year; this was an exceptional third. We asked if

bunny_huggers father would agree to putting things off, and he didn't seem to even notice the question.

The days leading up to the sale, though, the weather forecast got worse. More overcast. Forecasts of rain. Chill. The day before they were looking at rain through to 9 am --- our slated start time --- and a small but nonzero chance after. Temperatures in the low 50s, feeling like mid-40s. Our rain day, Sunday, promised to be worse. I insisted on proposing we postpone for the weather.

bunny_hugger's father, convinced either by the forecast or by my authority as a person he thinks well of, agreed. And this meant we could sleep in three more hours on Saturday and get to the pin-golf tournament, all without feeling guilty for cancelling the thing, too.

You can't do anything without feeling guilty. It certainly rained overnight. But it wasn't that wet by the time I got up about 10:30, and while it was overcast and cool it wasn't that dismal-looking. It might've been bad at 9:00 but surely not the whole day. As we drove to Kalamazoo the day got looking only better. By mid-afternoon, admittedly after the sale would have ended, and in Kalamazoo rather than Lansing, it was sunny and hot, gorgeous weather. Well, surely we'll not have reason to regret our choice come next weekend.

Ah, but the tournament. MJS was running a pin-golf tournament, in which you're scored not on game score but whether you meet some objective, and in how few plunged balls it takes. The event was Caddyshack themed, with quotes and pictures from the movie on all the 18 course tables, and the movie silently playing on continuous loop on one TV. (With closed captioning off, so if you haven't seen the movie all the way through, or haven't since the 80s, you had images but not actual quotes to remind you what was going on.) The objectives were, often, hard ones, or obscure ones, but MJS printed up great little booklets that described just how to make each hole, including tips of how to do it better.

bunny_hugger, MWS, and I formed one group and it was ... oh, challenging. Quite a few holes had objectives that restarted with each ball, so if you made some progress but didn't complete it your work was lost on the next ball. That's endemic to electromechanical games --- they weren't designed to save progress --- but frustrating on a modern table. And

bunny_hugger, who's felt herself in a slump despite taking home hardware at Pinball At The Zoo and finishing above me in Marvin's and Lansing league in the past month, felt her mood crash as she missed objectives, either by slender margins or by missing goals that MWS or I got. Especially ones that I got.

There were some unfairnesses too. On No Good Gofers --- a mid-90s Williams game that was not actually a Caddyshack license by virtue of Williams remembering that they don't actually have to pay anyone to use the themes of ``golf'' and ``mischievous gophers'' --- the goal was reaching the fourth hole, in the course's theme. Random awards were turned on, including one that gave me a free hole without any extra effort.

bunny_hugger didn't get that, and while she didn't kick me in the shin for that unfairness, I bet she was thinking about it. And it gave us a little question: technically the objective was ``putt out the fourth hole'', which I didn't do: putting out is making a particular shot after the game declares it's ready, and the game credited me for the fourth hole without giving me the chance to putt out. Did I satisfy the objective? We figured, yeah, the point was completing the fourth hole, not literally making this one particular shot in this particular circumstance.

bunny_hugger complained that she did so awful she'd be one of the bottom five finishers, of the 39 playing. She was not, but she did finish sixth from bottom. She also complained that I made finals, which I didn't think I would. But I did. My course score of 66 was one of quite a few people at the threshold score. I don't know how I made the top-16 cut. My guess is that ties were broken by number of holes-in-one or something like that, and I did have one or two of those. MWS was in, easily.

Finals were rounds of more pin-golf, five holes with even tougher objectives. And our scores these rounds would be added to our course rounds, so people who did well in the main course had an advantage in getting on to following rounds. I went in with the worst possible score of anyone making finals at all, so it would have been hard for me to move on in any case. And it didn't matter: I didn't make a single one of the five objectives of the first finals round. Mind, nobody in my quartet made any of the objectives on the first three holes either, but wow. Even the objectives that were simple I wasn't getting. At least I got close on the last two, Dirty Harry (collect a multiball jackpot) and FunHouse (complete the mystery mirror).

With all that done --- and my car jump-started, since we accidentally left the headlights on and this killed the battery in what seems like too little a time --- we hung around, watching some of the remaining rounds even after MWS got knocked out. Also watching the stunning number of tables suffer some mechanical failure. Balls will get stuck in tournament play, that's normal. But there were a bunch of flippers getting stuck, games resetting, drop targets spontaneously dropping and this on a game where knocking down drop targets was an objective. Some of this is the games getting a lot of play, and hard play. Pin-golf awards meeting goals, not scoring points, so there's no real risk to nudging the game very hard. If you save the ball, great; if you don't, you haven't lost anything. Some of this is that it was a lot of play, and that's hard on games. Some of this is that it was hot, quite hot inside the pole barn, which doesn't have air conditioning. MJS had both garage doors wide open and the rooms were still hot (partly as there was no cross-breeze). People noticed the incredible drop in heat just from three steps out from Time Machine, for example, even at the hottest part of the day.

Well, the tournament was great to attend, despite

bunny_hugger's cursing herself out for not getting enough objectives, and despite my spectacular collapse in the first round of finals. And it's always great to get out there. But it was tampered by the guilt of thinking how we really could have done the garage sale, and gotten that chore out of our lives, and now it's just waiting for us the weekend after Anthrohio instead.

The day after the tournament, and after our would-be rain day that was itself rained out, I found in the mailbox a note from someone who saw our garage sale listing and hoped if we hadn't sold something from it that we'd contact them. So someone besides

bunny_hugger's father wanted the garage sale to be there anyway.

Trivia: In 1830 the United States Board of Navy Commissioners allocated $330 per annum to establish a depot for storing marine chronometers and testing their accuracy, with funds for one employee. Source: The Long Space Age: The Economic Origins of Space Exploration from Colonial America to the Cold War, Alexander MacDonald.

PS: So now I've finally reached 2018, and the first big event then was our trip to Mexico City. Ready for some pictures of a hotel? 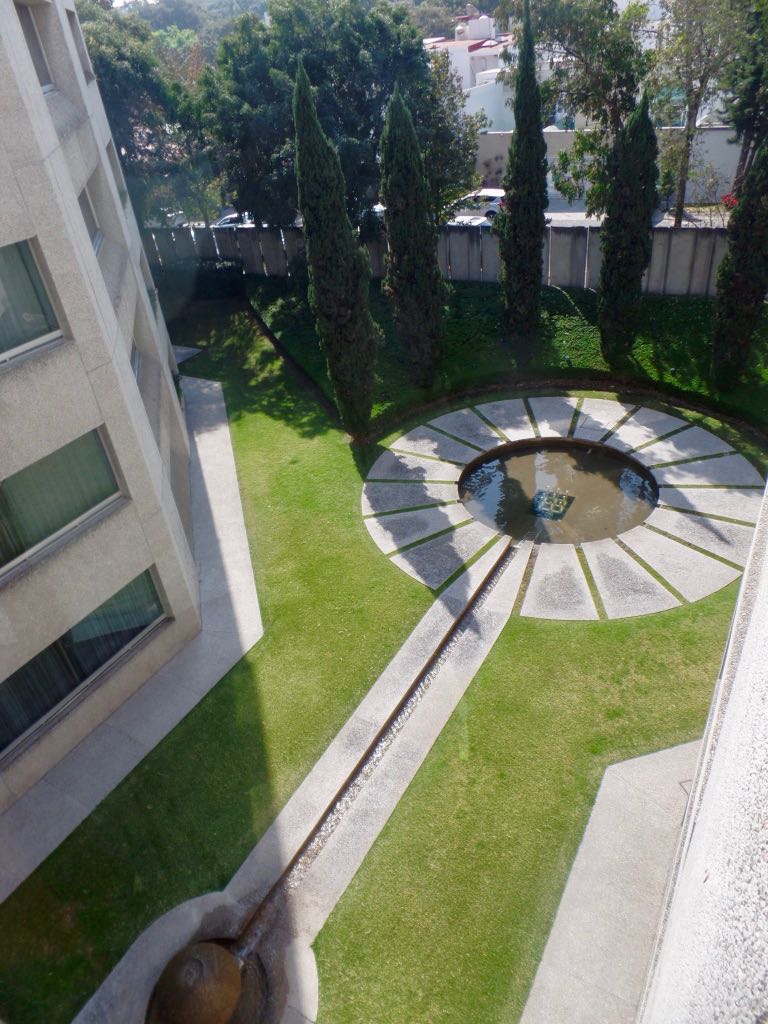 Keyhole fountain in the back lot of our Mexico City hotel, which I trust moved here after being the center decoration for the conference room table on Star Trek: Voyager. 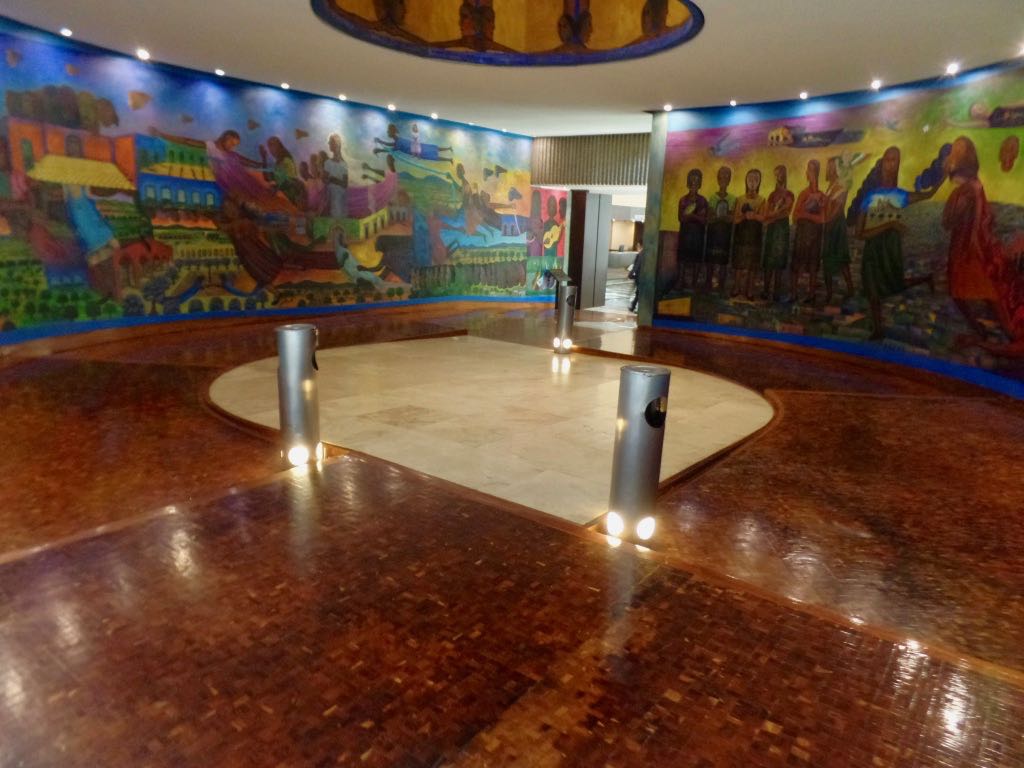 Hallway space connecting the front of the hotel with the hallways to the room corridors. One path has a couple of steps, while the other is gentle ramps, and the artwork was heartening to see. 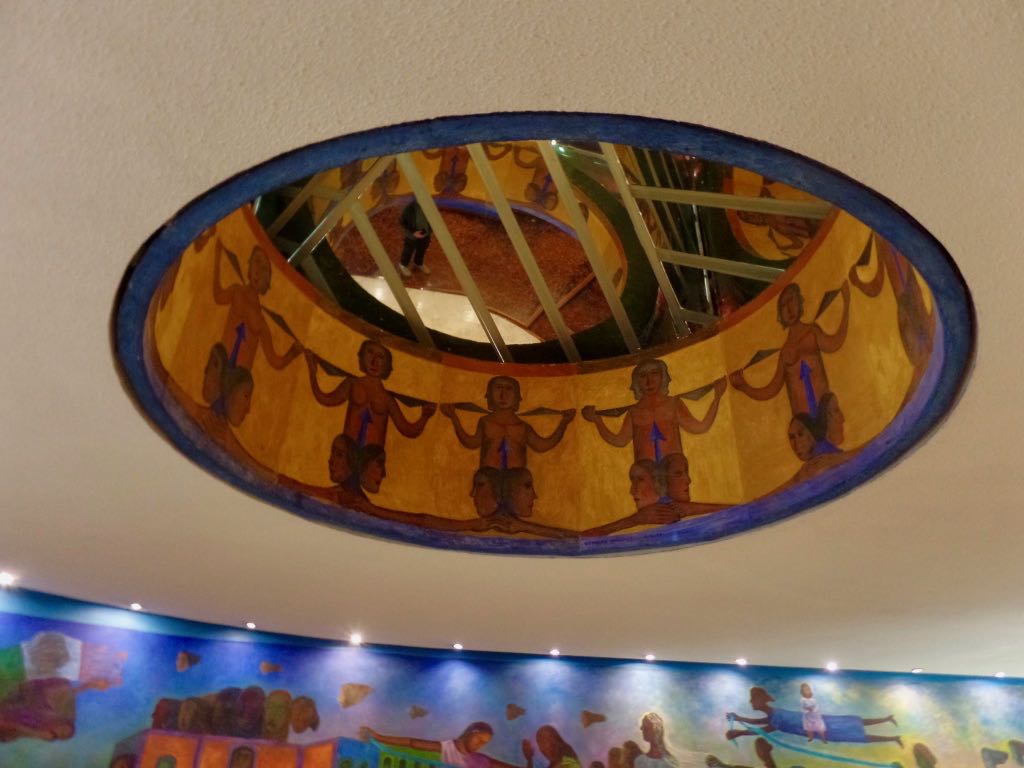 Artwork lining the inset ceiling lighting. It's mirrored, so you can see me photographing back at you.