Then he plowed up the fields

We broke with tradition setting out for AnthrOhio: we left our house, driving to

bunny_hugger's parents, at 11:00, just as we'd hoped. Usually we run late. We also broke with tradition in remembering the neck pillow which makes long car drives a bit more comfortable for

bunny_hugger. Her parents would be watching Sunshine, who took yet another car trip this spring with as stern a look as she gets. I'd swear she's getting suspicious of me, the person who most often puts her in the pet carrier.

This was also our first chance to see Peewee since her adoption. She's, by reports, mostly settled in all right to the household and stopped chasing the cat. She's an extremely excited dog, though, with far more energy than the four of us put together, and there was a fair risk she'd leap up into

Her parents also made lunch, another kind favor done us. While we ate, a raccoon ambled away from their bird feeder, across the street, and to the river near their home. That seemed to augur well for the weekend. But there were glitches too. We left their house about a half-hour later than we originally planned. Not, ordinarily, a major problem. But we did have a time constraint. We wanted to make our annual visit to Coon's Candy, and they close at 5 pm, and they'd be closed on Memorial Day, the day we'd be driving home.

Despite the late start we'd have made it with plenty of time except for a fresh mistake. I failed to make the change from I-75 back to US Route 23 in Ohio. Not for want of trying, the way I made this mistake two years ago. The interchange was under construction, and I never saw the off-ramp. But if there was a detour I didn't see the signs for one. Worse, at this part I-75 and Route 23 go in opposite directions, and the first exit is ten miles off. This one tiny glitch added a half-hour to our travel time.

Well, we got to Coon's Candy before they closed. But only just: we had about ten minutes and while they were friendly and offered toffee samples and all, they were also turning off lights and the radio. We got some candies, including some for both of

bunny_hugger's parents as thanks, but we didn't have the time to linger that we wanted.

The good part of all this was we got to the AnthrOhio convention hotel at a pretty good hour. The registration line was absurdly long, and we'd skip that until after dinner, when it had evaporated. But we also avoided the Columbus rush hour, and were able to get to one of our traditional fast-food places, the Hot Head Burritos. We try to get there one or two times each time we're in Columbus. This time it'd be just the once: they were closed Memorial Day, when we next tried to go there.

Still everything was looking good in the day before the convention really started. The hotel was undergoing renovations, according to posters signed by ``The Crowne Plaza, Columubus North Team'', and according to rumors of the work site you'd encounter if you stepped onto the second floor. We were on the third floor, in the part of the hotel that's not a tower, so we had the benefits of a top-floor room (nobody tromping around overhead) and the ability to use this short little elevator that's right in the middle of the convention activity space. The main elevator, by Thursday evening, was already suffering critical malfunctions. The hotel had responded by opening up the staff elevator and posting permission to use it to anyone ``experiencing extended elevator time''. We were able to avoid that mess afterwards.

The drawback of the Thursday before the con is not much is going on. There was supposed to be a Furry Mystery Science Theater 3000 event, and there was karaoke going on, neither of which we quite felt like.

bunny_hugger took out her freshly-repaired dragon marionette and walked him around the con space some, and that went great. People were quite into her puppetry, and i think we're building a reputation as the people who have those marionettes around. She is, anyway.

So, this would be our chance to get to bed early and get a full night's sleep before the full weekend of the convention got under way. We didn't get to bed as early as likely we should have, nor as much sleep as we ought, but that is what going to a convention is like.

Trivia: In Athens of about the fifth century BCE the name of the sixth month of the year was Posideon. Source: Mapping Time: The Calendar and its History, EG Richards.

bunny_hugger didn't go to the conference. (It was a long conference, nobody was expected to be at every single session.) Instead, we went to an amusement park, there to ride my 200th roller coaster. 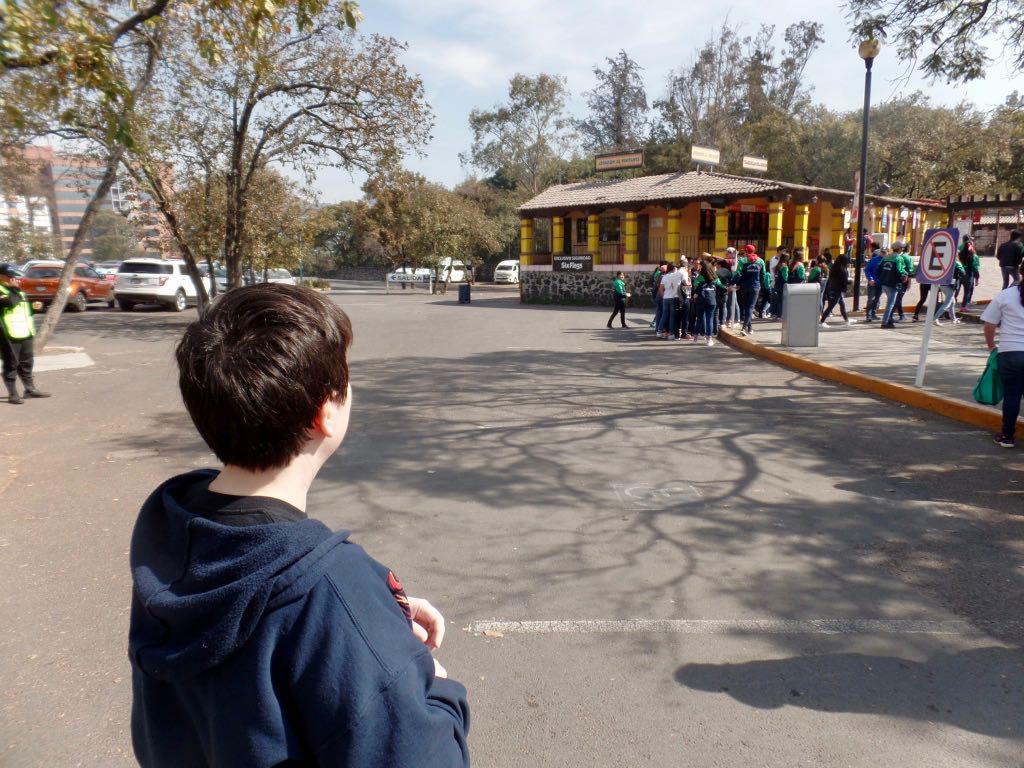 First view of the park! We took a taxi to Six Flags Mexico even though, it turns out, it wasn't just close enough to walk to but the path was simple enough to do. Maybe simpler: the mesh of one-way streets forced the taxi to take a circuitous enough path as to start being alarming, while on the sidewalk it would have just been ``follow the not-quite-highway''. Well, live and learn. 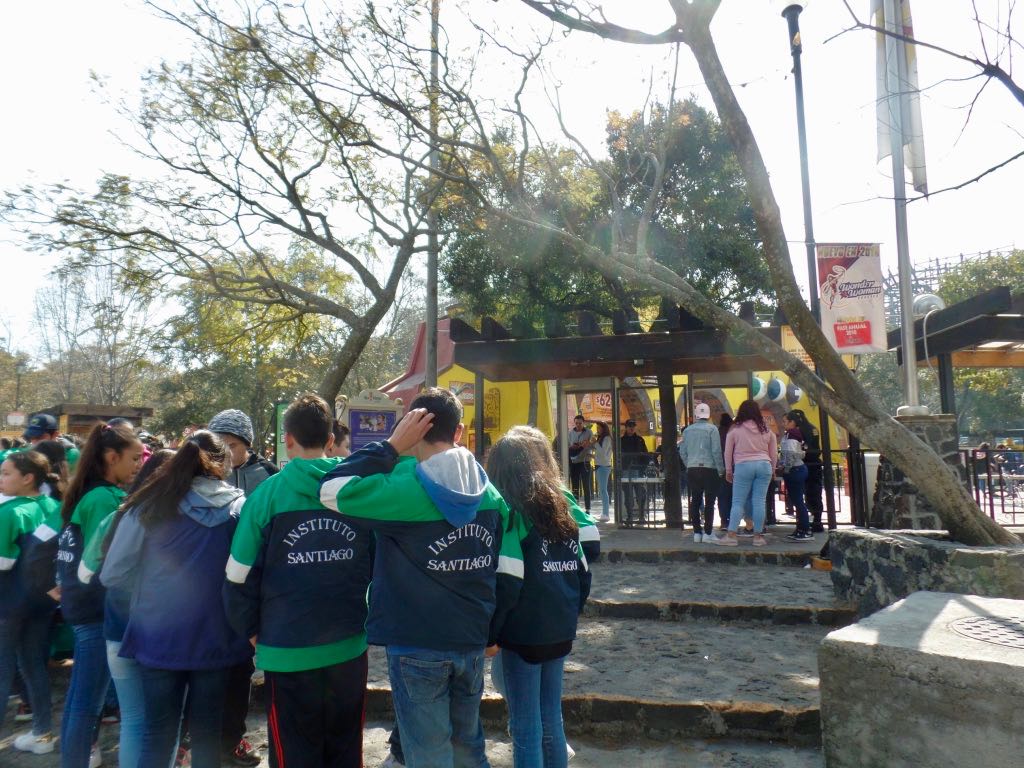 And then a sign of danger: a school group also going to the park. Well, there's no keeping them out, and I don't think the number of school groups was so large or unruly as to make the park difficult. 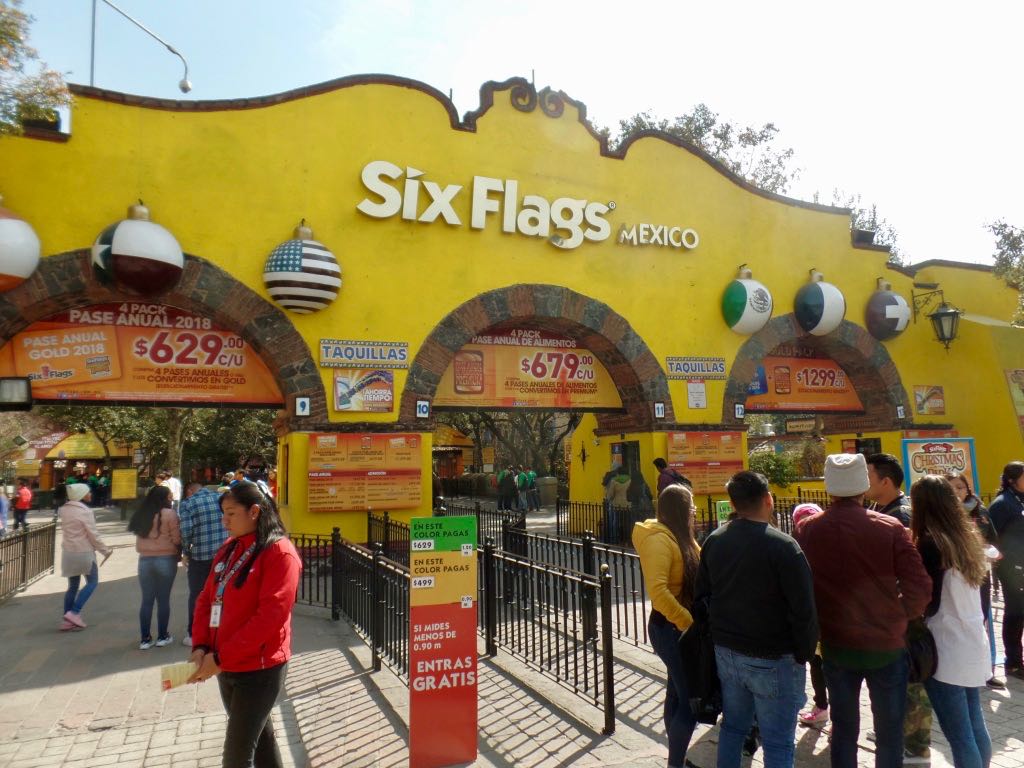 Front gates. The Mexican peso is about one-twentieth of the US dollar, but both currencies use the $ symbol, so it took about half a week before a price like $679 was automatically stunning me. The six Christmas ornament baubles are, based on an image search, a seasonal addition to the entrance. We were there the last week of the Christmas In The Park season.