I stood outside a department store

The week was spent doing things, including prep for the garage sale which we didn't want to do and which we finally held. This is why I didn't have so much time to write. Here's what I did:

In the story comics I answer these big questions: What's Going On In The Phantom (Weekdays)? Is Kadia's mother even alive? I know the first; I don't know the second. Saved you the bother of reading me.

And now let's get back to Six Flags Mexico for pictures, and my approach to roller coaster 200. 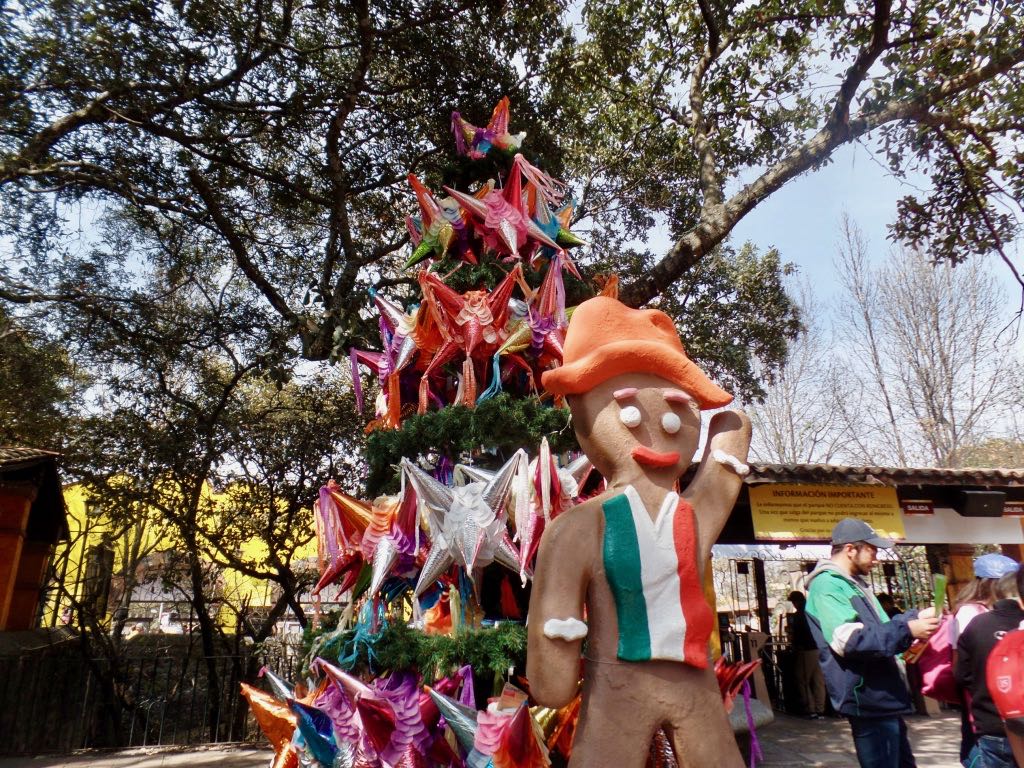 A Christmas tree! Or what's possibly a regular old tree but festooned with decorations for the holidays. It's hard to tell just what's underneath there; my gut says it's an artificial Christmas tree, though. 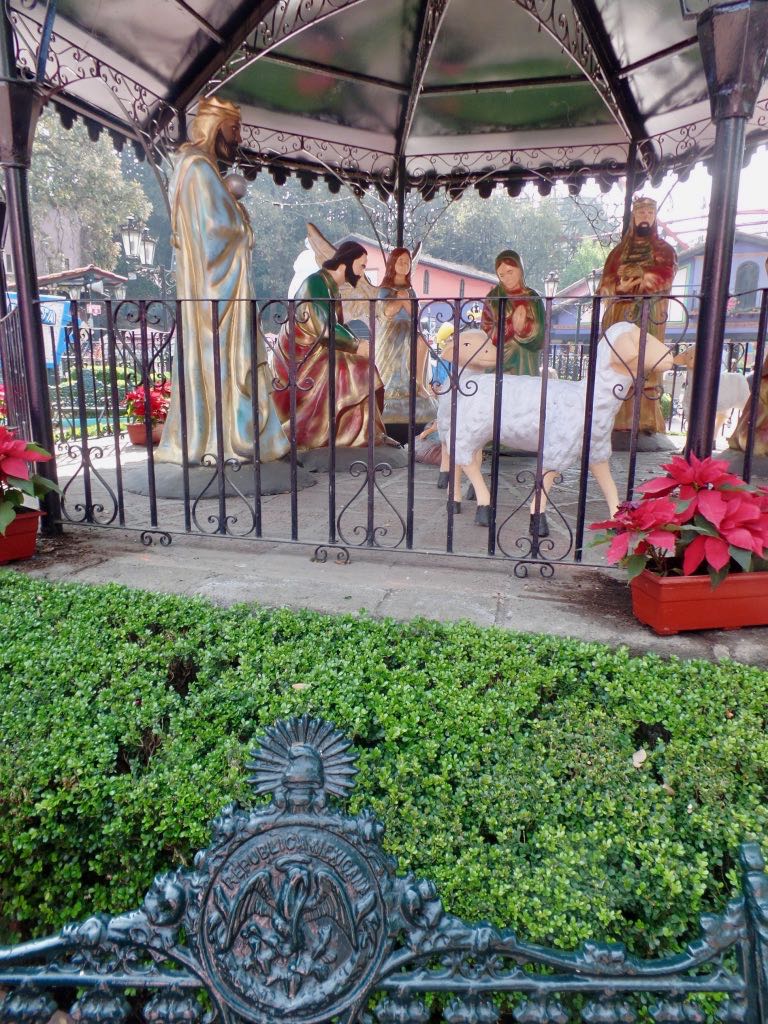 Nativity scene set up in the gazebo in the front area. Also, check out that rendition of Mexico's coat of arms in the wrought-iron fence up front. 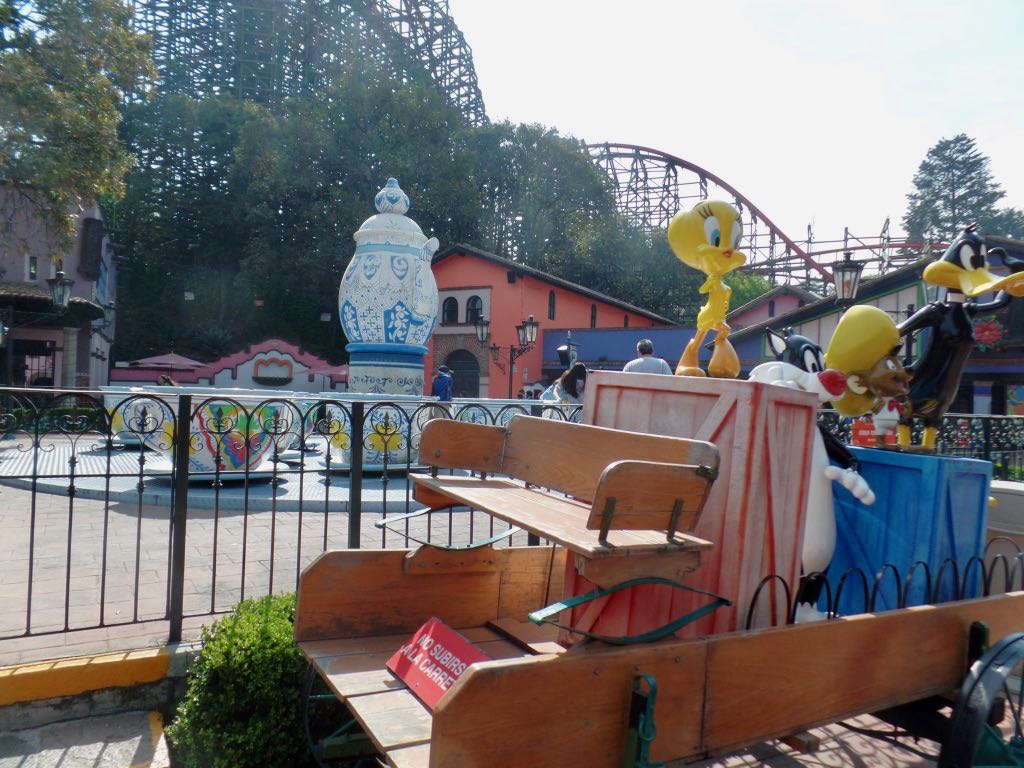 Decorative wagon up front, with the Looney Tunes characters that Six Flags gets to license. Also the one ride that's up front, the teacups, which we never did get to. In the background is Medusa Steel Coaster, the former-wooden coaster which we'd picked to be my 200th logged coaster. 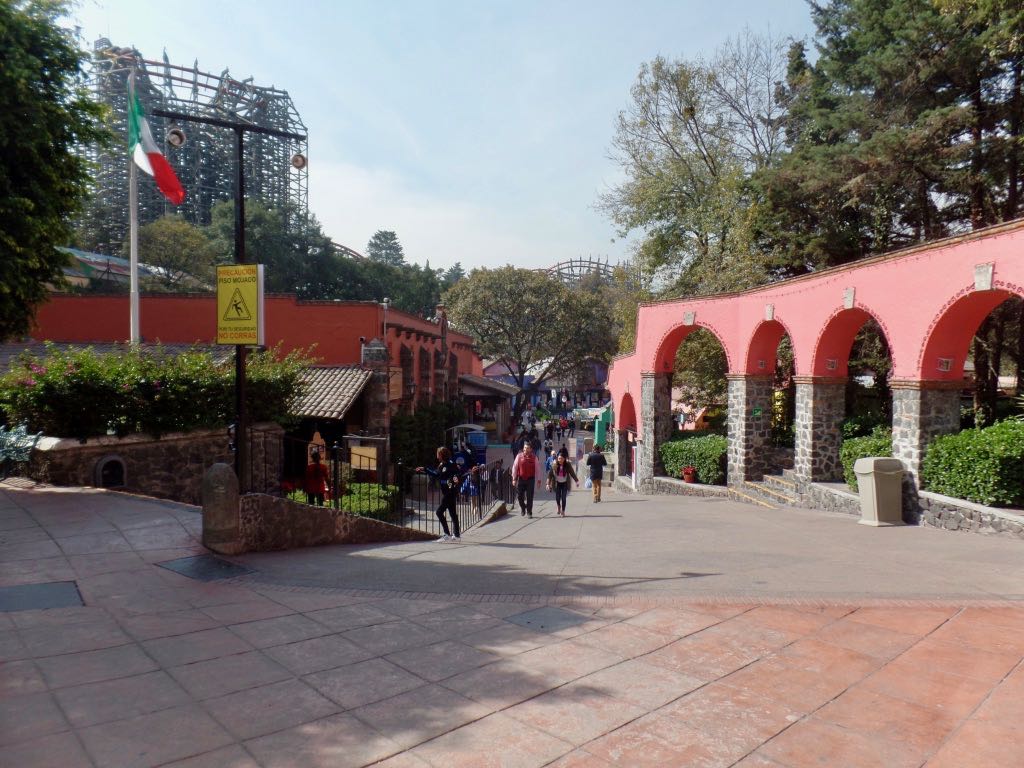 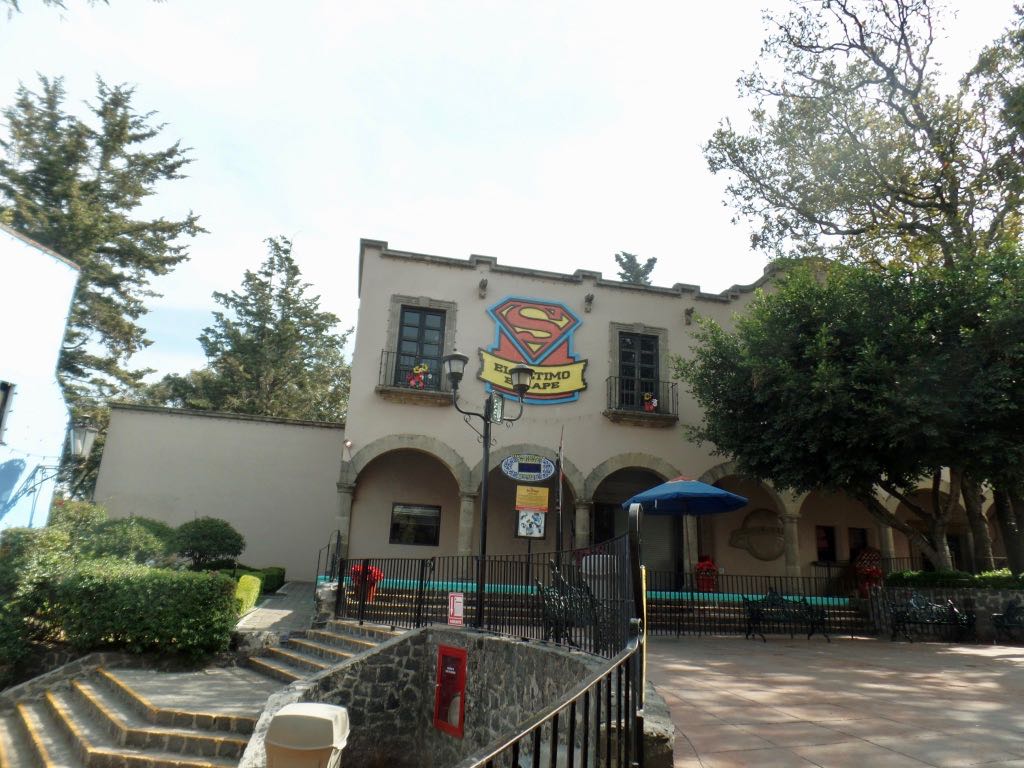 Do you see a roller coaster here? The queue and entrance for Superman el Último Escape here. The ride would be closed the whole day, and so far as I could tell the whole week we were in Mexico City, a particular shame as you could see it from everywhere in the park. Also from our hotel, if you knew where to look. 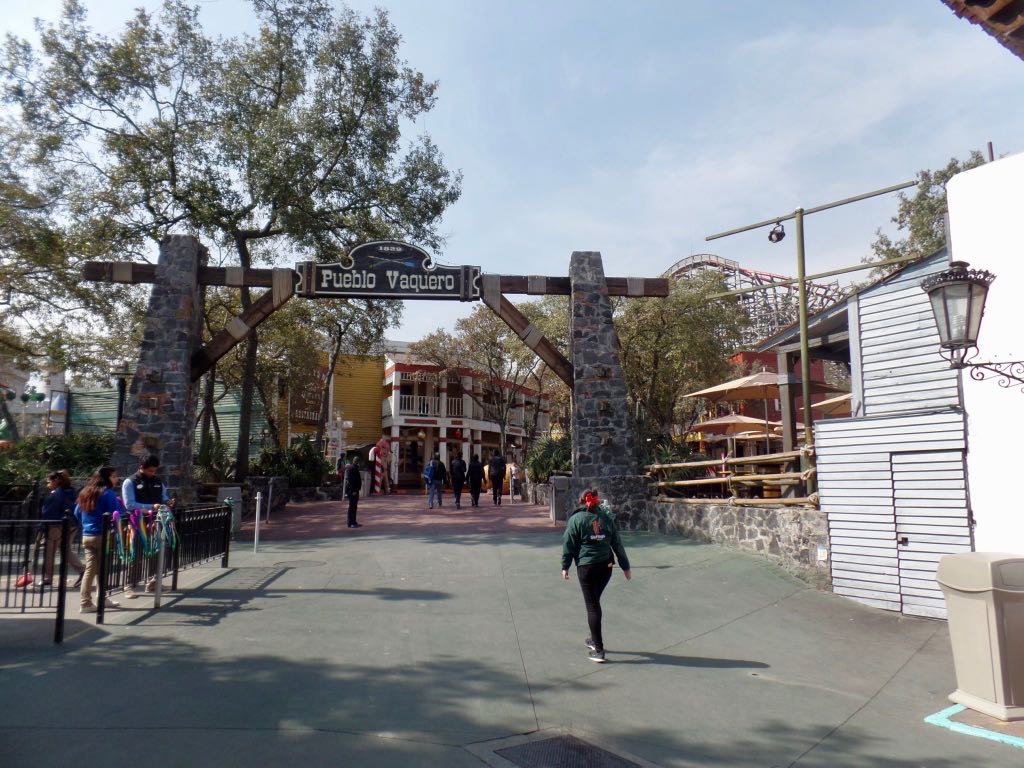 Old West-themed area of Six Flags Mexico. And I guess I get why Old West is a default theme for amusement parks in the United States, but it seemed weird that it should be so in the heart of Mexico. Or maybe it's just me that thinks that's weird. So here I learned what Mexican Spanish is for ``french fries''. I could not tell Texas French Fries from regular old American French Fries. 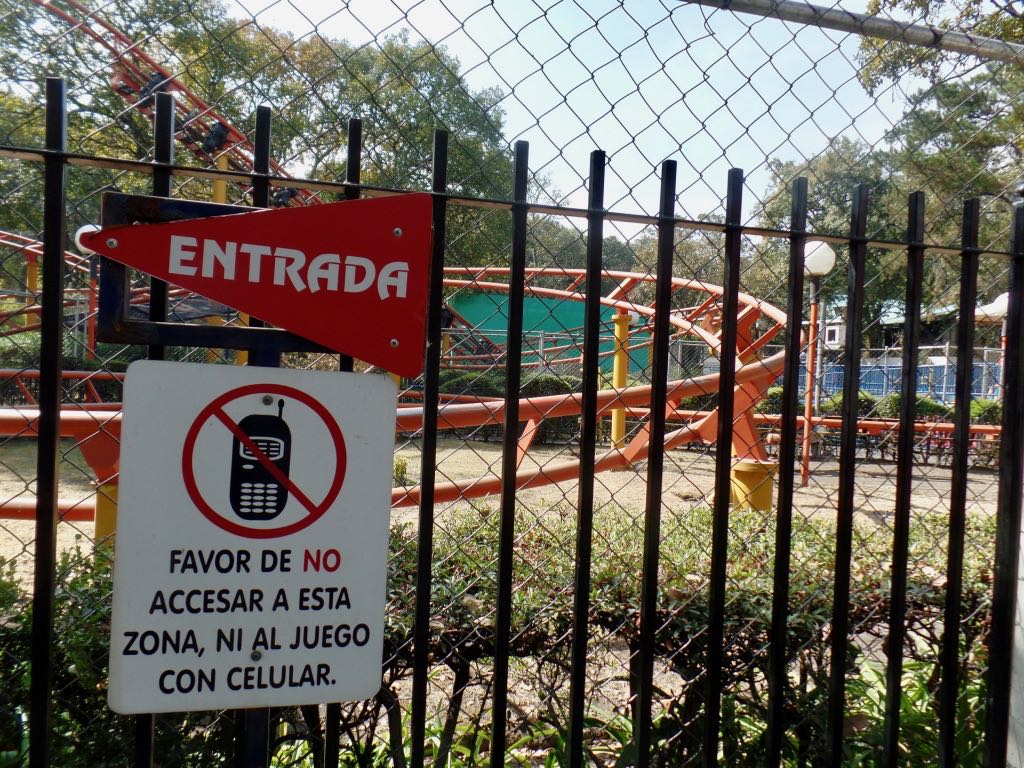 A warning outside Roller, a small roller coaster we rode because I had started the day at 198 coasters, to not bring your extremely old fifteen-digit cell phones on the ride. 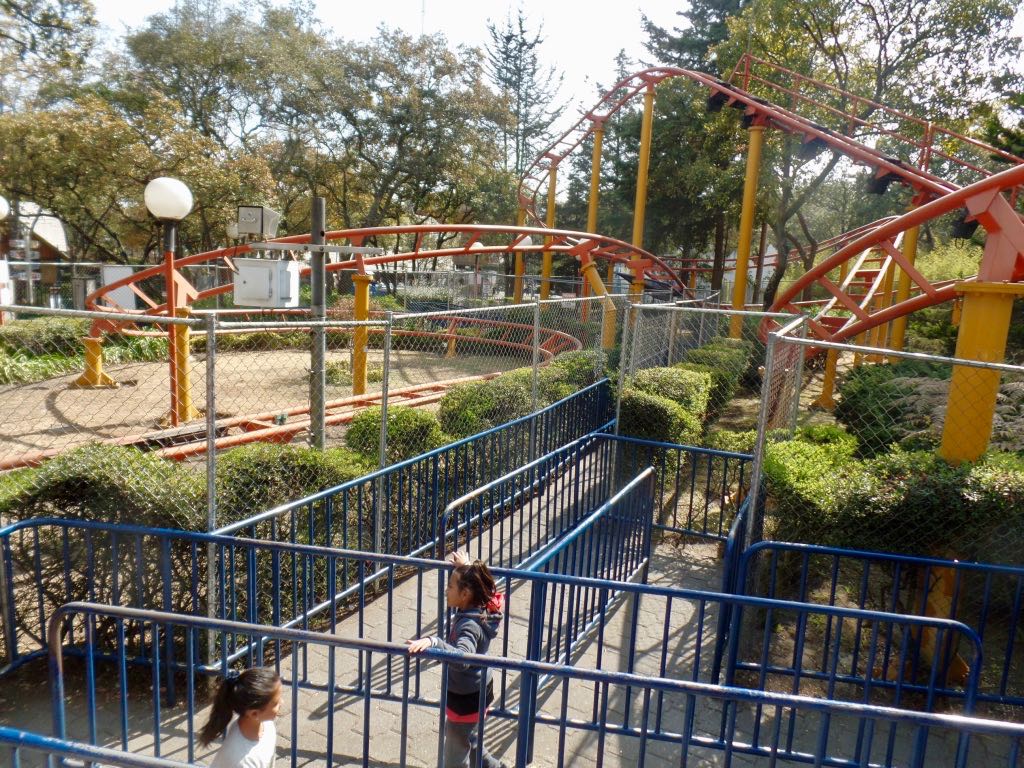 The queue for Roller, and some of the hills which show what kind of a coaster it was: something that we could get on without much of a wait, bash our knees mercilessly, and then stagger off to Medusa from. But it's a good ride for kids who want something more exciting than the Wacky Worm but definitely not, like, a Mine Train. 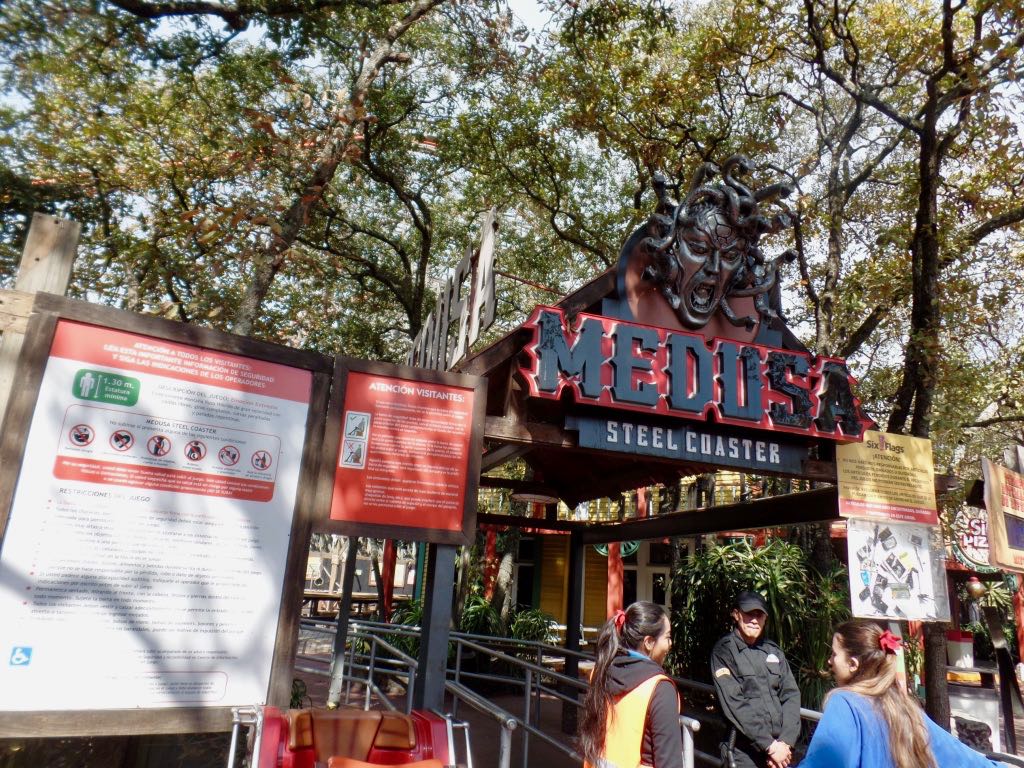 And the entrance to Medusa Steel Coaster. It has been the park's lone wooden coaster; several years ago it got the Rocky Mountain Construction makeover, with steel track and a much more twisty, intense ride. 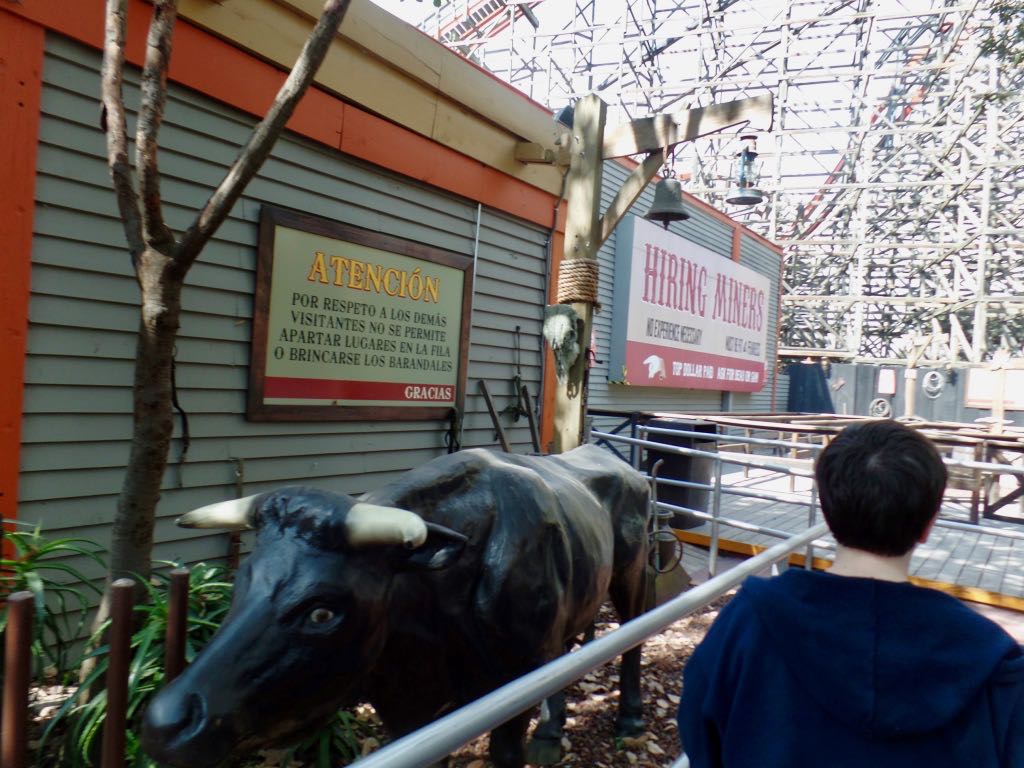 Part of the ample queue for Medusa Steel Coaster, which has this whole western-town theme including cow statues. 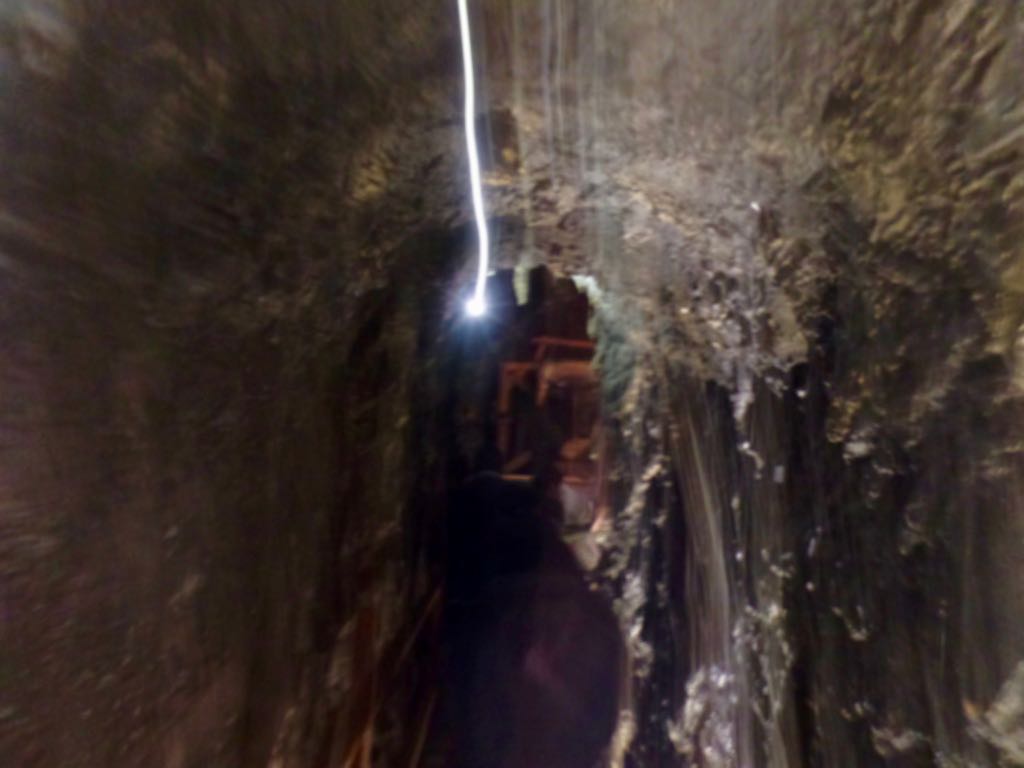 The queue for Medusa Steel Coaster doesn't just have stuff set out to look at. You go through some scenery bits along the way, including, here, a mine, presumably the one the advertisement in the previous panel was hiring miners for.

Trivia: The 29th of September, 1909, Wilbur Wright flew around the waist of the Statue of Liberty, as part of the two-week-long Hudson-Fulton Celebration, commemorating Hudson's voyage up the North River and Robert Fulton's steamboat. Source: To Conquer The Air: The Wright Brothers and the Great Race for Flight, James Tobin. (This was two years after the bicentennial of Fulton's steamer, but, eh, close enough. The Hudson-Fulton Celebration was kind of weird at its core.)

Currently Reading: The Classic Era of American Comics, Nicky Wright. See, Wright mocks Frederick Wertham for seeing something kinda homosexual in the Batman-Robin relationship, which is certainly a unique and idiosyncratic point of view not shared by ... anybody who's made a joke about them since adolescence? Honestly, Wertham's quoted remarks make what sounds like a fair starter case for the book being about women being scary agents of torment and the only safety for men being in other men's arms. I keep thinking maybe I need to read the actual Seduction of the Innocent someday.