Among the Morphicon/AnthrOhio traditions not yet gone or changed is the pizza party. They offer food for all guests; they offer a pretty good dinner one day of the con. So hospitality was filled with pizzas, and the outside filled with a great line of people not sure how many slices they could take per person. All you'd want, really: they cut the pizzas into squares, so there was plenty of unwanted edges. And they had plenty of vegetarian pizzas, pure cheese or just vegetables, a welcome change. (The usual failure mode for pizza is to get a bunch of, like, pepperoni, plus one or two pure cheese or pure vegetable for the vegetarians, and forget that people who'll eat pepperoni will also eat plain cheese.) Anyway, they had far more pizza than even the convention, more populated than even last year's, could eat.

This was an accomplishment we wouldn't fully appreciate at the time. The con ran short on food Saturday and Sunday. Sunday all I could grab for

bunny_hugger's needed breakfast were two oranges, all they had except for peanut butter sandwiches. Maybe we were just there at bad times. Maybe the con is growing at such a rate that rooms like Hospitality are getting caught under-prepared. This is not to say they did anything wrong; just that they underestimated what was needed.

We were able to get to the tail end of one of the few SIGS we didn't run. This was the Macro/Micro meet-and-greet, for people with extremely large or small characters. And while we're not particularly excited by being macro or micro, we have a lot of fun with people who are. We missed the first half owing to the pizza party, though, and basically got to say hi to folks and bring the good news that mucks were not yet dead. Really, for not having a particular mucks-and-mucking sig we spent a good time talking up the idea of furry mucks to people.

They had a video game room. We wouldn't spend much time in it, although we were impressed by the Dance Dance Revolution-like machine set up. The dance pad looked to be wood, which seemed neat and weird. The game itself seemed to be some possibly open-source clone of Dance Dance Revolution. It included a lot of My Little Pony-based songs, if we were reading other people's scrolling correctly.

We spent more time in the board games room. Almost right away

bunny_hugger signed us up for a session of Betrayal at the House on the Hill, a game we like but never get to play with more than four people, and usually only play with three. That would be Saturday early afternoon, but that's all right. It would be after the fursuit parade and we didn't know of anything else we really wanted to get to. Also in the board game room was a jigsaw puzzle, put out as something for everyone who visited to work on.

bunny_hugger has gotten into jigsaw puzzles pretty seriously lately, and she was confident she would get the meandering project under control. It was harder than she anticipated, in part because the picture --- a Thomas Kincade picture of a lakeside cottage in the evening light, with a chunk of white dwarf star in the dining room --- has the sort of very faint, gradual changes of color that make it hard to do. She focused on her traditional start, finding all the edge pieces, and was ultimately foiled, one edge piece missing. A board game room organizer said she had checked the puzzle --- gotten from Goodwill --- and found it had the 1,000 pieces promised on the box.

bunny_hugger, more learned in the ways of jigsaw puzzles, knew something which startled me and may shock you: when a jigsaw puzzle promises to have a specific number of pieces, they usually mean ``about'' that many pieces. The only way to actually know whether a jigsaw puzzle is complete is to complete it. It will be complete if it's come from the factory --- manufacturing just doesn't make missing pieces plausible --- but second-hand? Good luck. The board game person speculated on thrift shops test-assembling jigsaw puzzles, likely as a break room activity, which ... well,

bunny_hugger and I could not believe that the thrift shop put much labor into checking that its $2 used puzzles were complete. But the puzzle would make only slight progress on Friday. The edge would be incomplete. On Friday.

They had a dance Friday, as they would each day of the convention.

bunny_hugger broke with tradition a bit by going in fursuit the first night. I went in my Angel kigurumi. The dance floor was a bit sparse, although nothing so dire as some of the dances we'd been to in the old hotel where they never really found a good space. This was held in main events, nice and easy for everyone to find. We danced, with a couple of breaks to rest. In one of them

bunny_hugger sat on a chair outside the ballroom, and several people came up to ask whether she was too hot (she wasn't) and whether she knew where the headless lounge, with a lot of air conditioning, water, and a place to unsuit momentarily, was (she did; she just didn't need it). I'm glad for the people being attentive to a potential fursuiter in distress, but really, she did just need to get off her feet a moment.

Despite the breaks we saw the dance through to the end, at 2 am, before going back to our room and resolving to get a full night's sleep before the fursuit parade. It was supposed to start at 12:30, and was supposed to have everyone gather at noon. We would not get eight hours' sleep before then, but, we'd try as best we could.

Trivia: Trip Hawkins priced the release of the 3DO Interactive Multiplayer, released in the United States in 1993, at $699, on the grounds that this was the initial retail price for the complete Commodore 64 setup, and the game console was more capable. Source: The Ultimate History of Video Games, Steven L Kent. 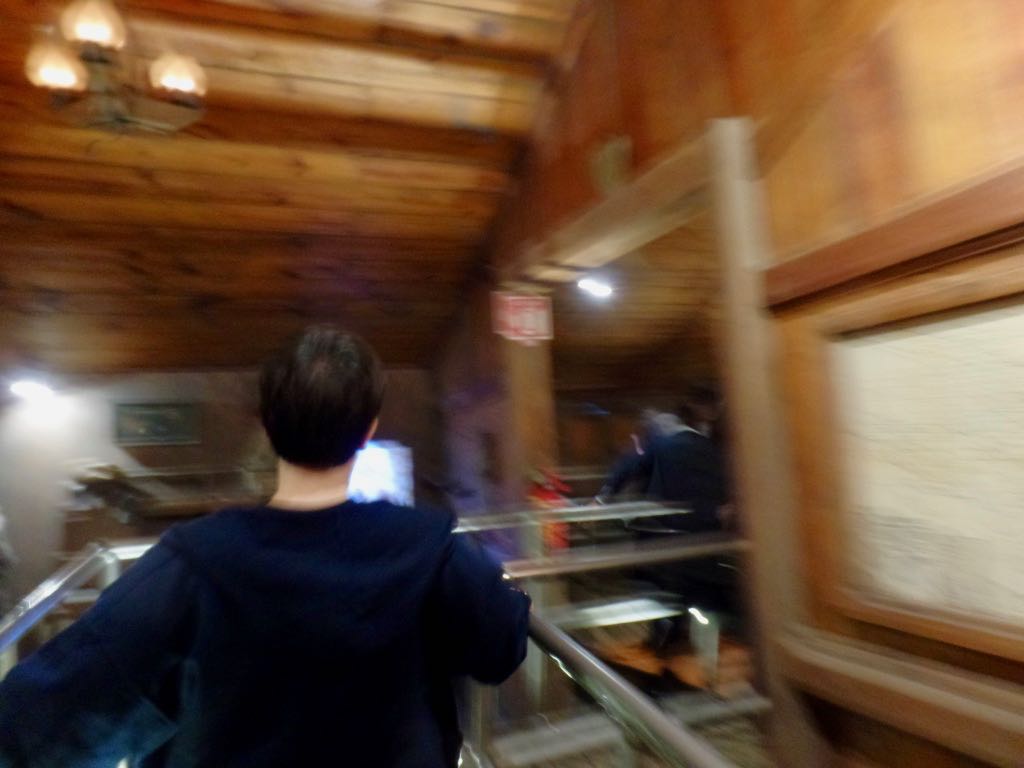 And after the mine, the queue goes through an area with a Mystery House, where the floors are built at weird angles and the lack of external reference makes it look like gravity's going all wrong. Here

bunny_hugger and I stumble through what ought to be a flat floor that's actually going pretty steeply downhill. 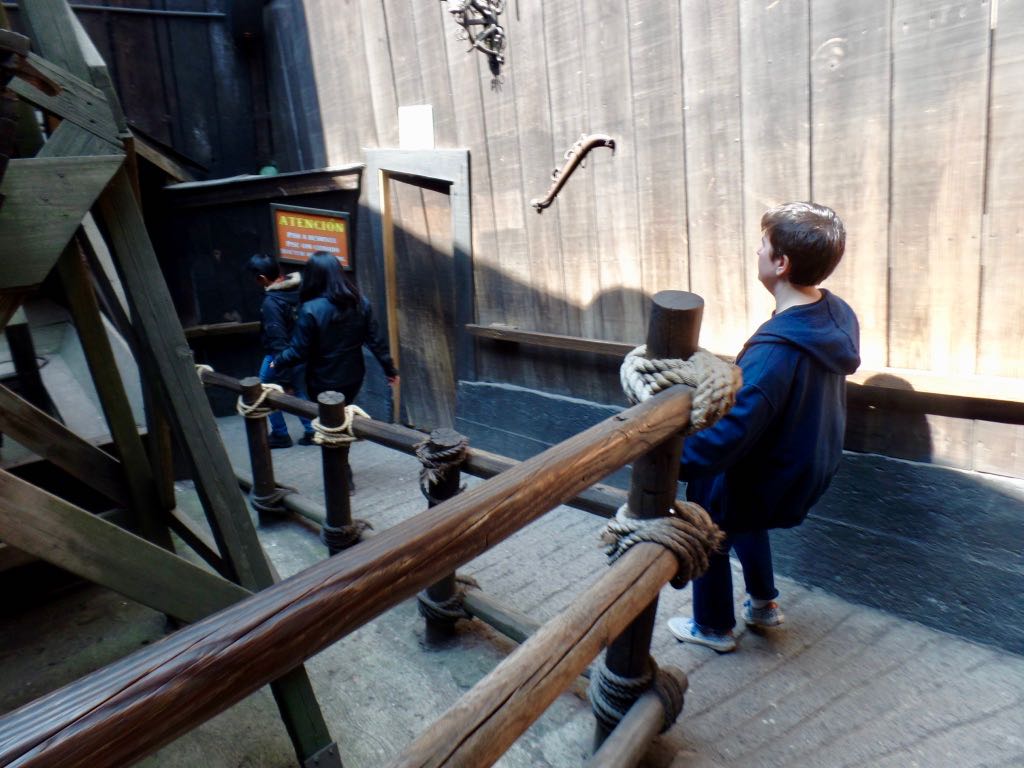 The Mystery House design continues outside, thanks to the walls around the queue and all being high enough to obscure the true vertical. 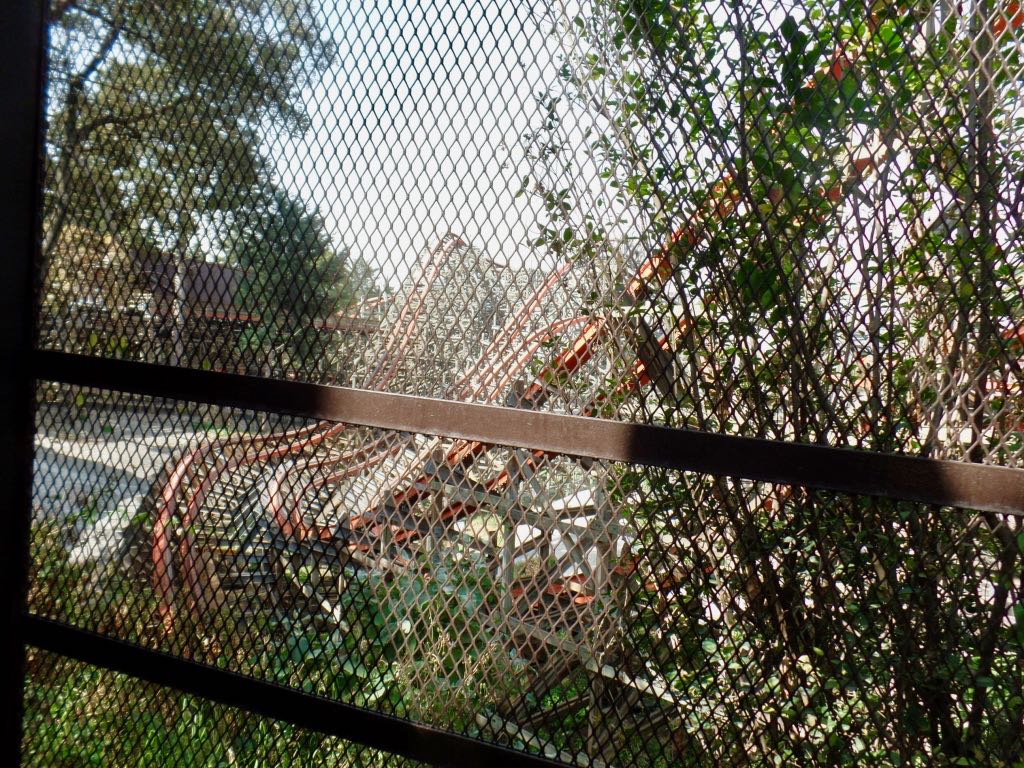 And finally a good look at the roller coaster! The twisty steel tracks give some idea how much the RMC conversion changes the layout of a wooden coaster; there's spirals that you just won't get on wood, most of the time.