And for his own preservation

I've mentioned my skepticism about furry convention themes before. Most of the times I went to Morphicon or Furry Connection North the theme affected the art on the cover of the con book and little else. Last year's AnthrOhio theme was more prominent: all the rooms had art that was on-theme, and there were these RFID readers for your con badges, to check in at places and earn achievements. This year's AnthrOhio theme was ``Corporate Takeover''. I thought that was a spectacularly closed theme for a con; what's fun in fiduciary responsibility and oversight statements? I mean to someone who's not me, who would probably play a video game that was Commercial Paper Tycoon. (Commercial paper is unsecured short-term promissory notes.)

This shows my lack of imagination, or the convention taking the theme not so literally. The real theme was Office Space, or at least the bull-filled world of the corporate office. There were events (that we missed) named stuff like the ``Corporate Teambuilding Exercise'' or ``Business Casual Meet and Greet''. The RFID checkin stations were back, too, with achievements that fit the stuck-in-the-office-job 90s-style dystopia. People connected with the con suiting in their khakis and dress shirts. Everyone already had lanyards, of course, and that's maybe the only spot that could have done more with the theme.

We made it as ever to the Cake Decorating contest. The challenge was to do something on theme and, with neither

bunny_hugger nor I thinking broadly enough about the theme, we were stuck. Also sticking us: once again while they provided tubes of frosting, they didn't have the tips used to guide the frosting to a specific, thin shape. With the lack of ideas we settled on mine: the New Reorganizaton Chart. This might be visually dull but I think we made up for it with the subtle madness of the scheme. Like, of course, there's one first-level group. There's three second-level groups, each reporting to the first-level group. There's four third-level groups. One reports to a second-level group and to the first-level group above that. One reports to two different second-level groups. One reports to another third-level group, which leaves one of the second-level groups with nobody reporting to it. Then there's a tangle of reporting lines underneath the third-level groups, which is where the cake runs out. I think it had that distinctly me comic touch of being just a little bit more fastidiously odd the more you looked at it. Also in being pitched way wrong for the audience, as the judges basically took a quick look at it, saw a bunch of colored rectangles, and moved on to more visually interesting cakes. Like the ones reproducing the BoxOwl Logo, a touch of wonderfully sinister corporate branding used to reinforce the con's theme. Well, they gave us a chance to explain our cake designs, and the judges seemed to agree that ours was a correctly-formed joke-like structure and very likely there was someone in the world who would find this funny.

We stopped in to check the rabbits again before going to the Raccoons and Procyonids SIG. This would be the lone panel I hosted this year; I was slow about submitting the other stuff I might have done and they apologized but said the schedule was done. Fine enough. For once I didn't have one of the death slots of Sunday early morning or noon; I had Saturday at 7 pm. You know, at the same time as the What's My Lion improv comedy show. And the Foxes and Peppers concert from Fox Amore and Pepper Coyote. So given all that we had a pretty good turnout of like five people. I finally gave away some of the Grauniads of the Galaxy pinball promotional flyers I've been carrying around forever (Stern gives away SO MANY of these things), and we tipped over the candy bins, as traditional. This was held again in the Executive Boardroom where

bunny_hugger's panels had been. The broken curtain rod had been removed and not replaced.

Afterward I remembered I had intended to talk about Rio Rita. This is a 1929 RKO movie featuring the comic team of Bert Wheeler and Robert Woolsey. (Imagine a Groucho and Chico Marx as a duo, without Chico doing the weird Italian thing, only I'll admit not quite so good.) This is only important because it's a (then) modern-day Western with the main plot being about the search for the notorious bandit The Kinkajou. I'm not positive anyone having anything to do with the movie knew quite what a kinkajou is, but it's a quiet thrill for us fans of the lesser-known members of the raccoon family just to hear everyone wanting to know the fate of the Kinkajou.

bunny_hugger did a bit more puppeteering, bringing her ostrich around. This is always an attention-getter because the ostrich has a nice big head and wings that your hands fit into, so you can do that Muppet Show thing where he drums his fingers on his chest. And, in curiosity, we poked into the board game room where the jigsaw puzzle had made much more progress. Someone found the missing edge piece, offending

bunny_hugger, but the whole board was much nearer finished. The board game room was about to close for the night and someone pointed out that the con had four and a half hours to finish the puzzle --- they were scheduled to be open only from noon to 4 pm tomorrow. It looked like the con might maybe finish the puzzle? Who could say?

The Saturday dance was not so busy as the Friday dance, but then we got there later in the day.

bunny_hugger went in her Stitch kigurumi while I went in Angel, and so we made an even more adorable pair than usual and everybody knew it. Also I really, really like the energy I bring to a room by being a big guy dressed in all pink. The dance ended at 1 am, to our great surprise; we'd just assumed it was going on until 2 am. All right.

There was also another Mystery Science Theater 3000 event going on, this one with like eight people on-stage loosely riffing on Reefer Madness. This was maybe too many people talking at once to really be heard, especially with the audience also all talking along. Also with people calling out take-a-drink moments like someone new in a hat entering the scene. So, mm. It's nice being around people who are having so much fun, but I can't say we were into the event. It may have hurt that we came in pretty near the end, so we had not seen what I imagine the progression to be from loosely but actually organized thing to sloppy drunks talking over each other.

And in wandering around the dispersing crowd at 1:30 am we noticed something set up in one of the hangout spaces. It was the convention's Cubicle Playset, a little spot with partition walls and a 90s-era office phone and IBM Electric Typewriter which brought both of us memories of typing classes. And of just how good real typewriter keyboards felt back then, with their heft and their solid physical feedback. You can understand how people just had naturally better typing habits when keyboards were designed by people who thought out how keyboards should work.

While there we met someone whose name I forget. He was just at the convention on a day pass, looking around for anyone to talk to after the friend he'd meant to attend with bailed on him. So we were just there, talking with him and being part of that casual simple hanging-out talk, for someone who did not think he would ever go to AnthrOhio again, but at least was having a nice moment in his last hour there.

We went to bed.

Trivia: The Casablanca Conference of 1943 identified the bombing targets in Germany to be, in order of priority, German submarine construction yards, the aircraft industry, transportation, oil plants, and other war industry. Source: The Second World War, John Keegan.

PS: Getting closer yet to Medusa Steel Coaster, and to my 200th logged roller coaster! 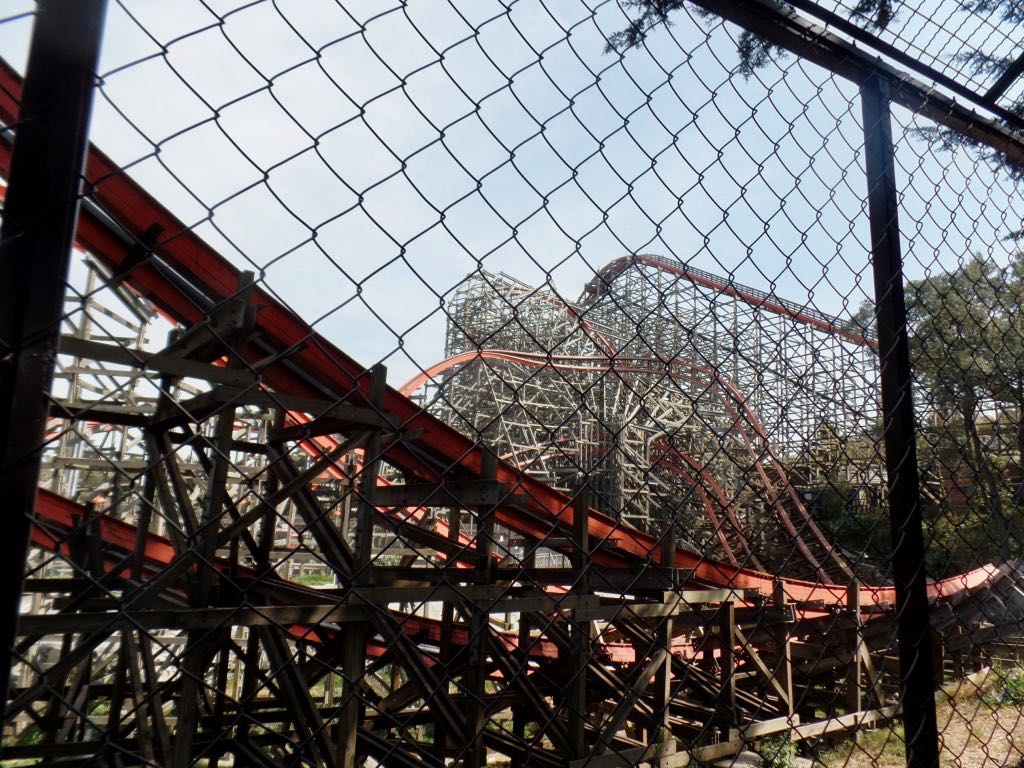 And a look back on the ride, showing off just how much of it is these great loops around the hillside, with inline rolls added to make things more dizzying. 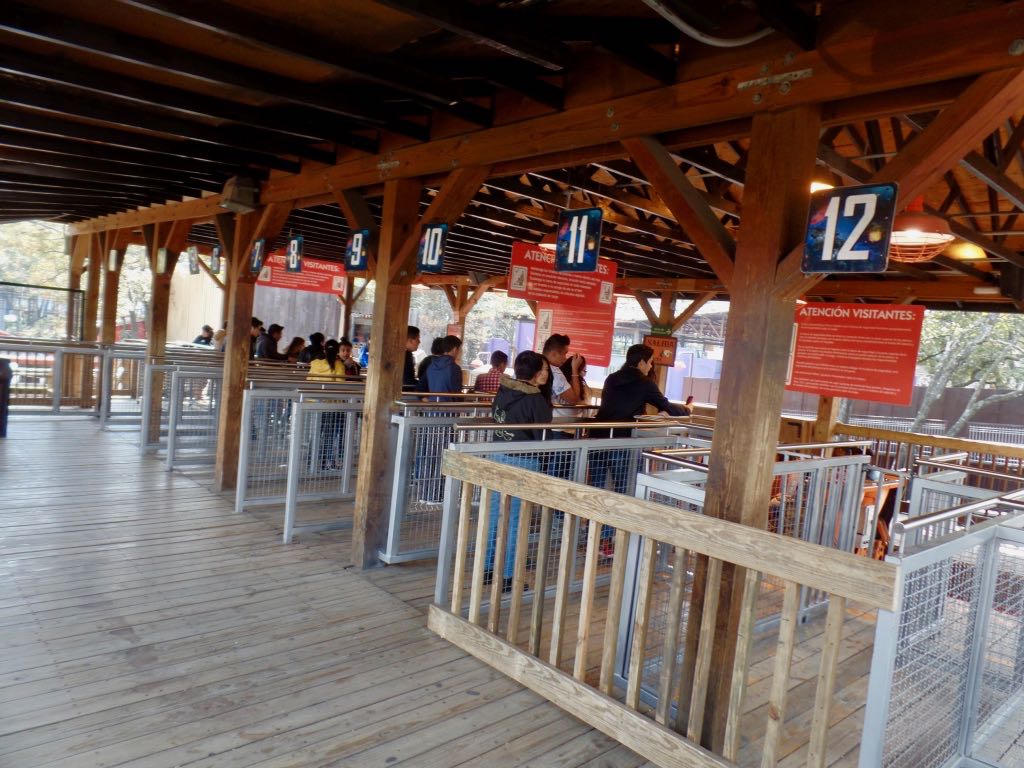 Finally! The launch platform! We went to the back seat for my 200th logged roller coaster ride. 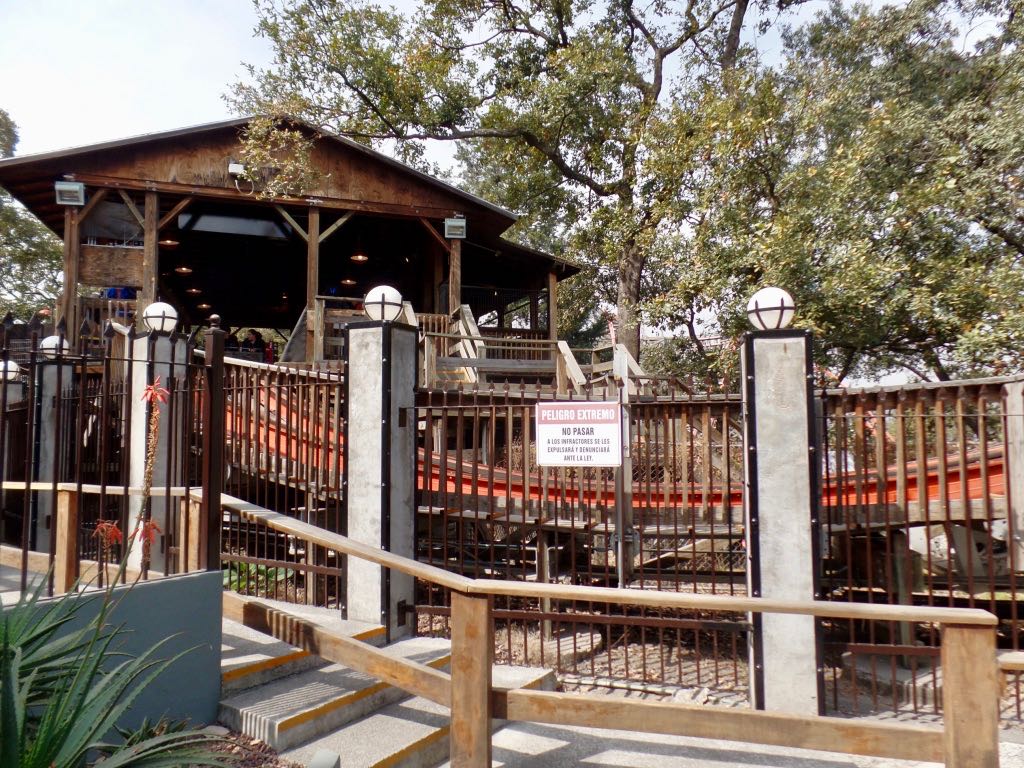 The outside of the lift station, walking the long way to the exit. There was, I believe, a photo booth but by the time we got to it they'd cycled out of us and, anyway, we only rarely get ride photos, even for something like this. We both have the exact same expressions in every ride photo anyway: me, eyes wide open and mouth agape like I'm hollering,

bunny_hugger grimacing like she's been punched in the stomach.