A gang of kids came over and mugged me

Had my humor blog going another week, successfully. I even have hopes of having it ready for the next week, which should cover my next big event that'll turn into a long report around here. What event? Wait and see! Please. Anyway, stuff meant to be funny, or be about things that are funny, the past week have included:

Now let's enjoy more of Medusa Steel Coaster, and the approach to my 200th roller coaster. 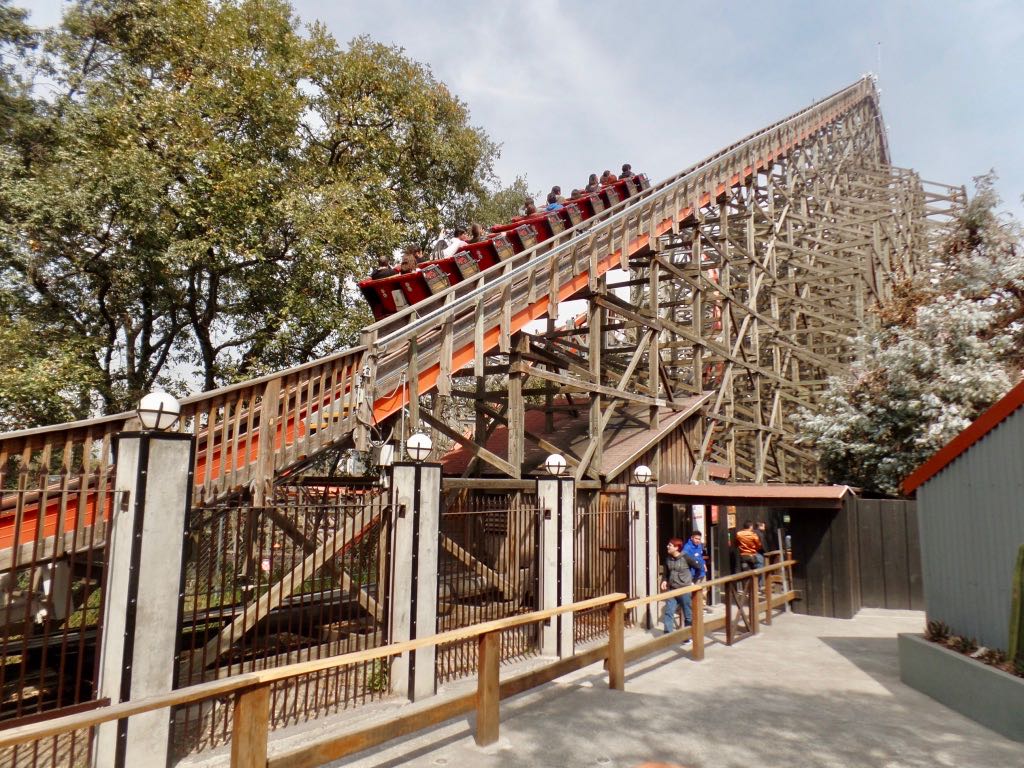 Medusa Steel Coaster's lift hill. Granted this looks much like the lift hill for any wooden roller coaster of this size. We had ridden in the backmost car. 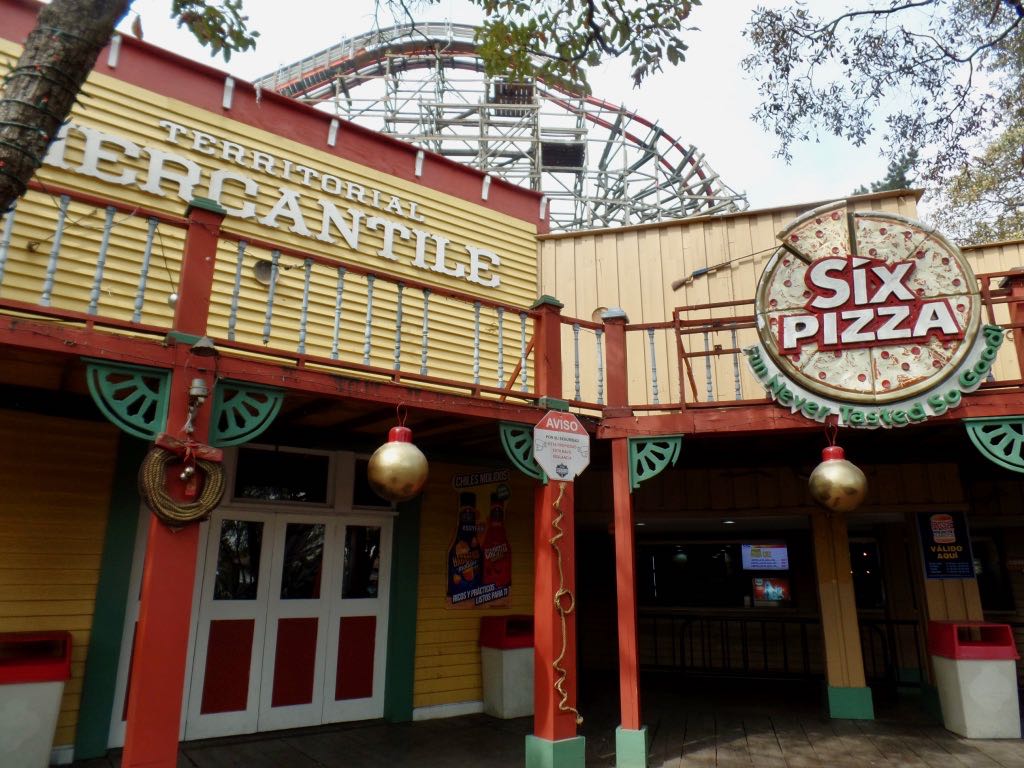 Merchandise and food. The Six Pizza name and motto --- Food Never Tasted So Good --- would be a source of endless wonder to us during the day, not least because of the bold choice to cut the pizza into eight slices here. Nobody would think it was that weird if it were a six-piece cut, guys. 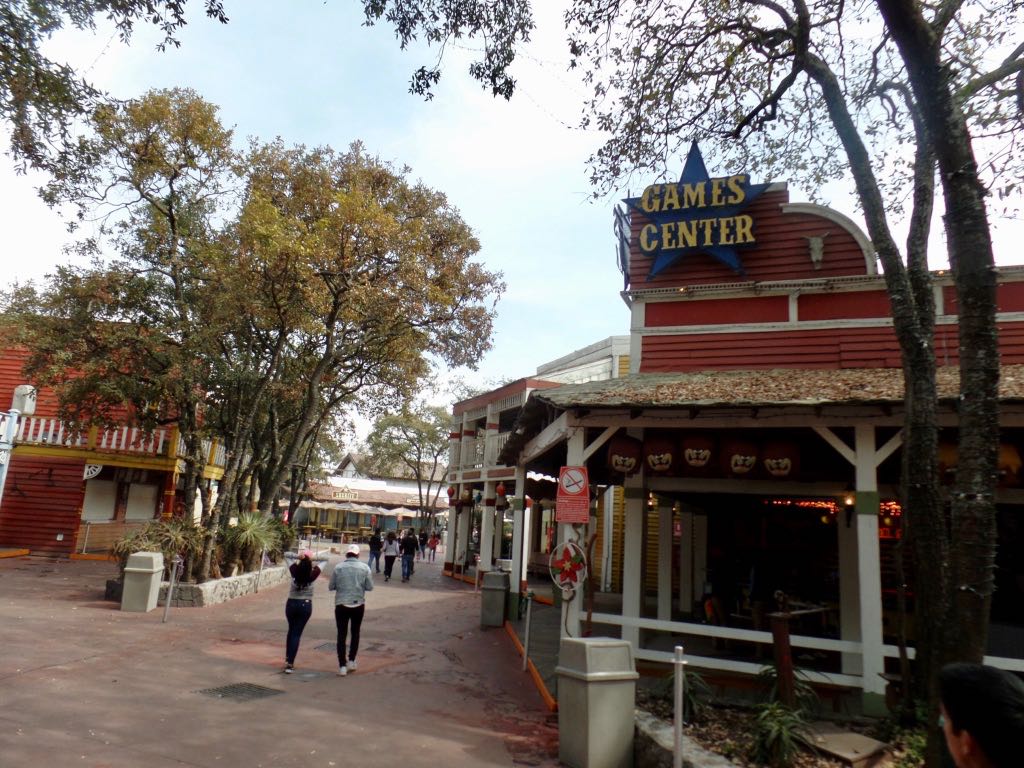 An arcade, in the cowboy village. Redemption and video games; no pinball. We didn't find any pinball in Mexico City, granting that we didn't do things like look on a pinball map to better our chances. Oh hey ... what's this? Why, it's people doing mascot work even though it's a really hot, sunny day. 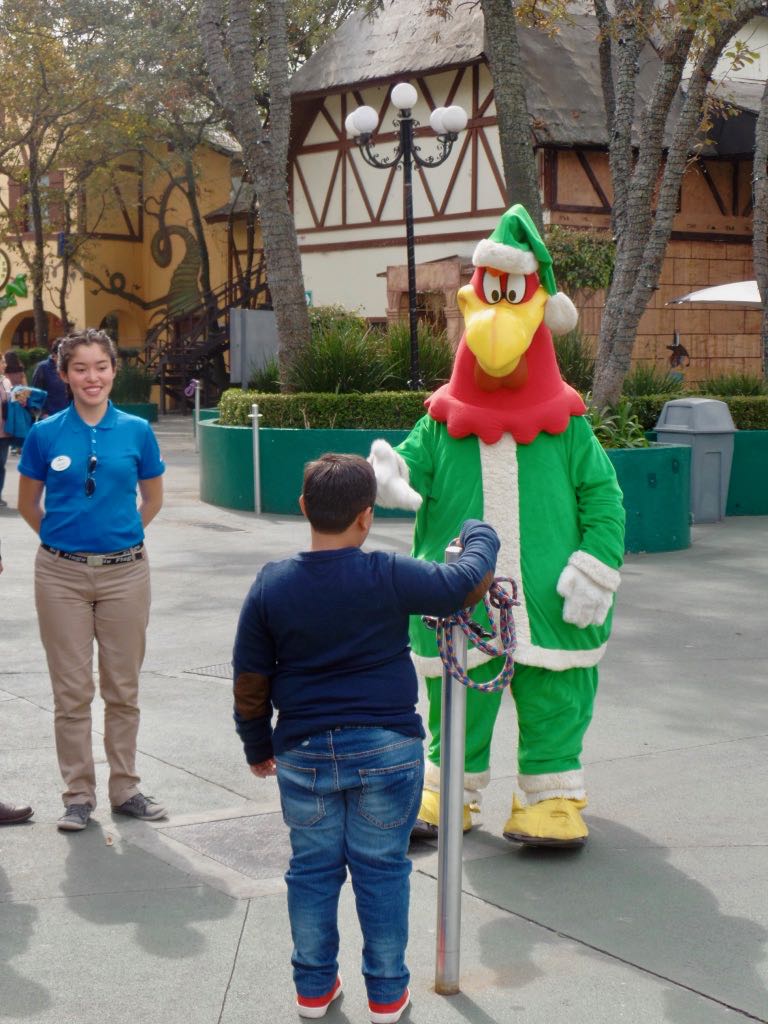 Foghorn Leghorn in Christmas livery that doesn't quite make sense if you look too closely at the outfit, promising a kid that it's all right. That's right, come on in. You know Foghorn Leghorn's a hugger. 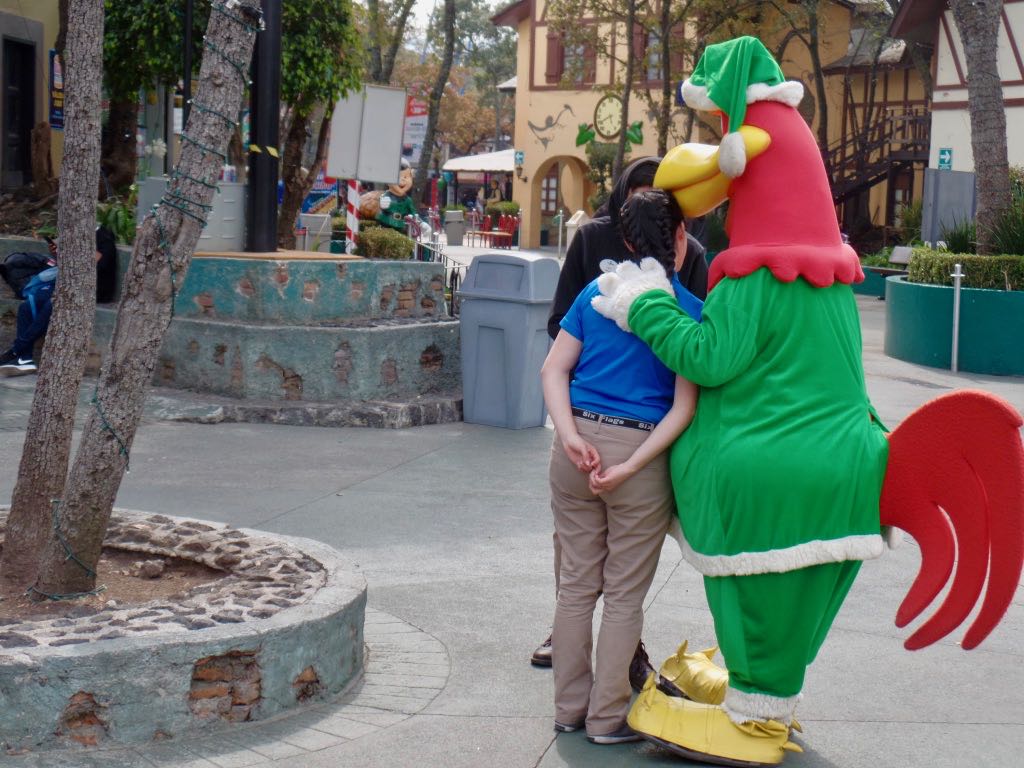 Some kind of high-level conference between Foghorn and his handler and I was never sure who that third person was. Good luck you or I finding yellow chicken-foot boots like those. 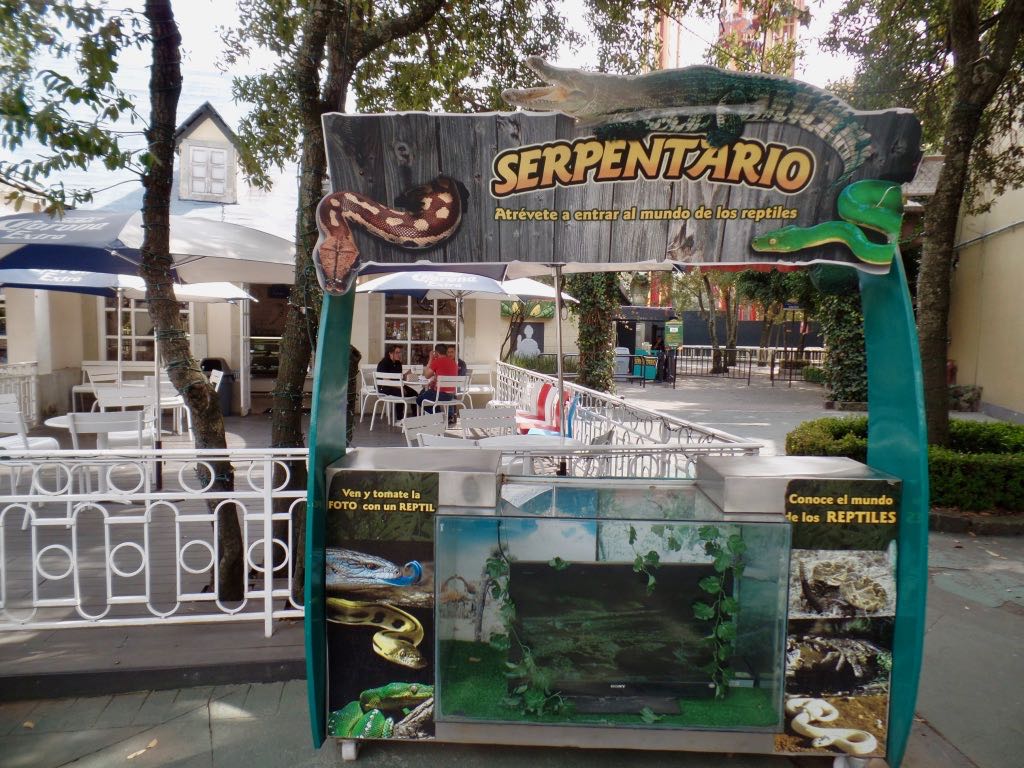 Oh. Yeah, they also have live animals here. We chose to pretend that the various reptiles were being kept in responsible ways. Hey, not-at-all fun fact: before it was a Six Flags park, these grounds were known as Reino Aventura, and they held, in a dolphin tank, the orca who would go on to star in Free Willy, because we somehow thought orcas belonged in amusement parks. 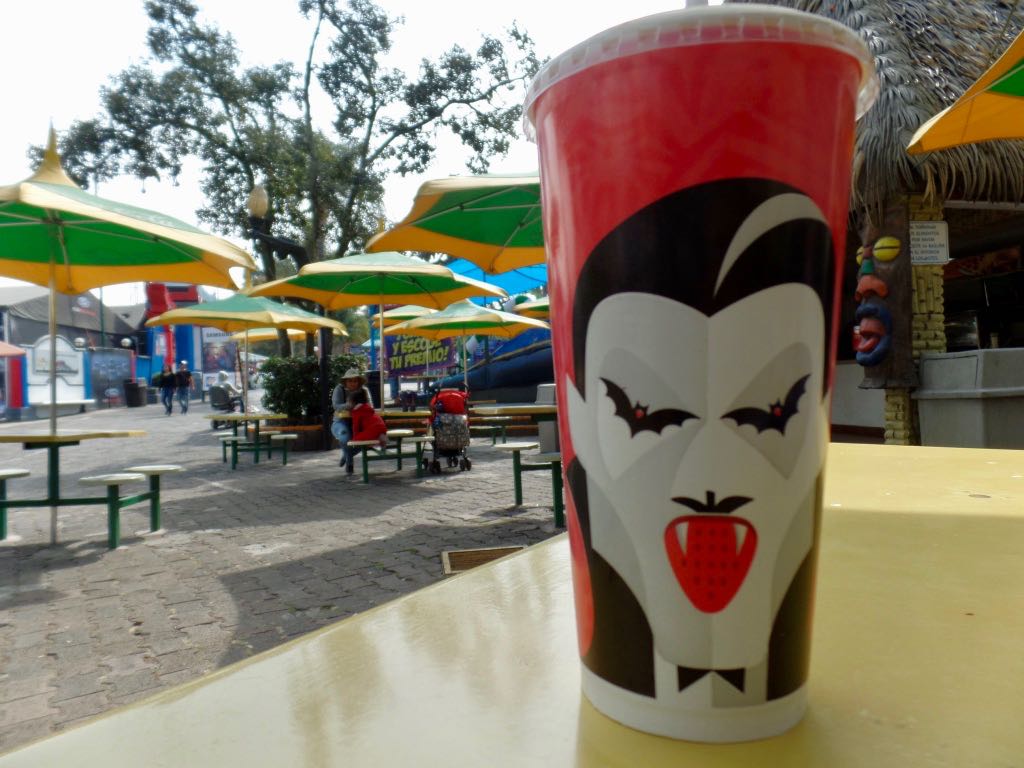 We had a lunch snack of cheese fries and Coke Sin Azúcar and realized partway through: it was late January. These cups are either left over from Halloween/Dia des Muertos season or something really weird is going on. Swinging ship ride, named Vudu and given this ... uh ... I'm not sure what to call the theming. One of the weird bits of going to an amusement park in a foreign country is how different the standards of what's rated as acceptable are. 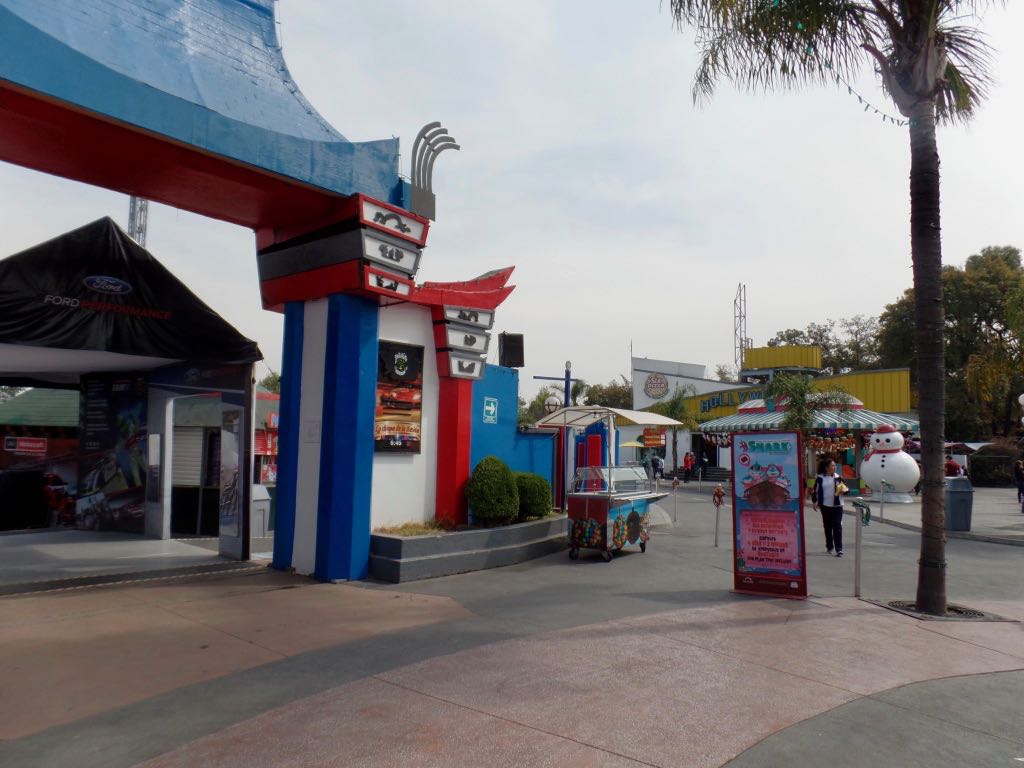 Part of the Hollywood-themed area of Six Flags Mexico, featuring a replica of Graumann's Chinese Theater that opens up to one of the performance amphitheaters. 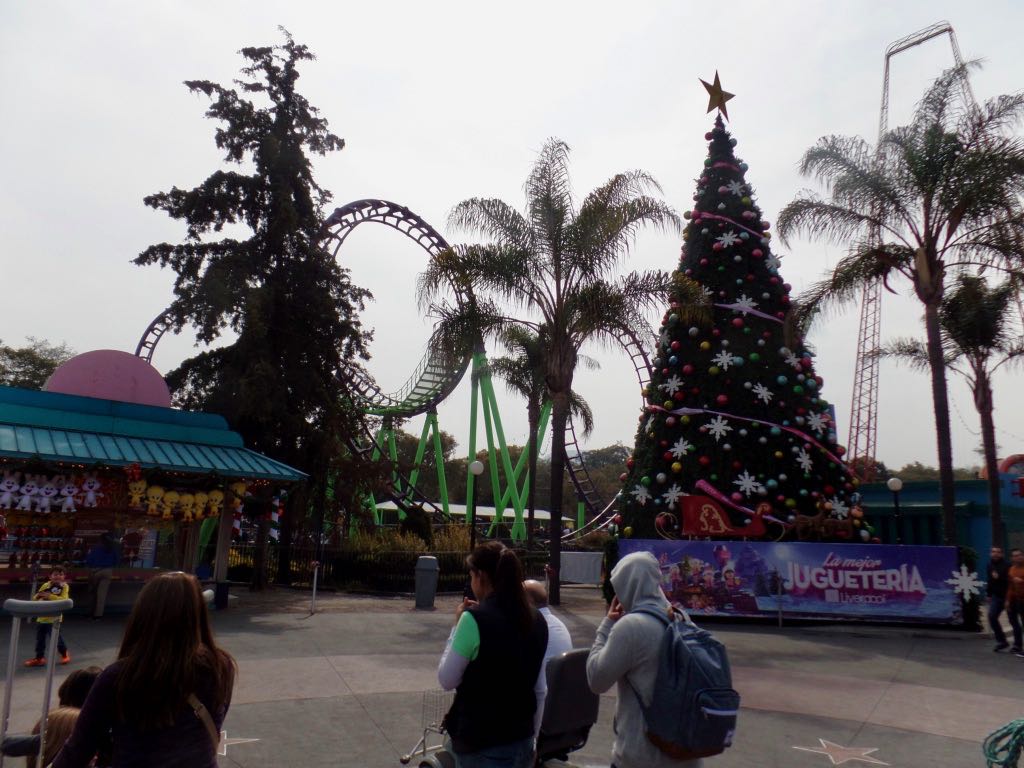 Lovely big Christmas tree and, behind that, the Boomerang roller coaster. The next big ride we'd go on.

Trivia: Fred Thompson's death the 6th of June, 1919, followed an operation for several problems including gallstones, appendicitis, and hernia. It was his 17th surgery in four years. Source: The Kid of Coney Island: Fred Thompson and the Rise of American Amusements, Woody Register.

PS: How May 2019 Treated My Mathematics Blog, some self-inquiry into a blog I haven't done my best at recently.