I forget when we held our last garage sale. It was another slightly dreary affair, hour upon hour spent in the cool, threatening weather while strangers came up and didn't buy things, netting us and

bunny_hugger's parents about $60 in total, almost enough to pay for the pizza we got to console ourselves for the experience. We had stuff left over after the last time, and put it in the basement, promising to hold another garage sale ``next season'' when maybe it would move instead.

bunny_hugger's father was boundlessly enthusiastic about our prospects.

bunny_hugger and I were ... just fine with finding reasons we couldn't do it this season. But the seasons wore on, and her father kept asking, and finally we just had to commit and actually do the blasted thing. ... Or not, since our first planned date was a couple Saturdays ago and the forecast was for a high enough chance of rain it seemed bad to do it then. It turned out to not be so bad that day, but we had already cancelled for it. And our first rain day was actually bad. We rescheduled for the Saturday after AnthrOhio, and that too was rained out. Finally we settled on the Sunday after AnthrOhio, absolutely not wanting to do this but absolutely wanting this done.

It started of course way too early for us, although 9 am is a bit late for garage sales to start, which is why we're bad people to host garage sales. The day was actually nice, clear and sunny and even a bit warm. Maybe the first good weekend day we'd had in weeks, apart from the one where we called off too soon.

bunny_hugger's father was able to come watch over the tiny groups of people with us; her mother stayed home, with the dogs and cat and all. It's good seeing him, and he brought that ball for Sunshine we'd left behind on Monday. And we could not answer the strange condition of our other neighbors' car, which has been sitting in their driveway a while and which has two big impacts in the windshield. It looks like softballs or something pushed the windshield out of shape, twice, but the glass didn't actually break altogether. We have no idea how this happened. If it happened on the road, how did they possibly drive home safely? If it happened in their driveway, how? They have some loud parties often enough, but that seems outside what even a boisterous party can do. We have no explanation for this phenomenon.

It was ... sparse. The start-of-the-day rush of people never came; I think we had one person stop by the first hour. It picked up a little, over the day, at least around the lunch hour. Around when church let out. A few people drove by, slowed, and went on without getting out the car. Presumably they were looking for furniture or clothes or something. We didn't have any.

We did have someone buy a book on garden pond maintenance, and who was very interested in our pond. Enough that

bunny_hugger brought him back to look at it. We haven't had the chance to clean the pond, or put the mass of our goldfish back in. And we had taken the chance that morning to pour the algae-killer on. This first step in pond-clearing needs to be done early in the morning to be effective and I thought doing two awful early-morning tasks at once was wise. Maybe so, but it meant when this fellow looked at our pond it had a layer of foam and dead algae, so it looked not so much like a spot of backyard tranquility and more a slice of oil refinery spillage pond.

For a while we brought out Sunshine, wearing her leash in rather good spirits. She would have attracted attention had more than one person been around in the time it took us to get tired of threading her leash around the legs of the card tables she wanted to hop underneath. But it's nice to know that she is comfortable being in harness and leash, and she did some good work eating maple seeds,

For some unspeakable reason we ran the garage sale to 4 pm, with the last hour half-price in case anybody came around. And as we were packing up people did: a bunch of kids who were thrilled by the prospect of getting something, anything, for a dollar or a quarter or a dime.

bunny_hugger talked with a bunch who kept running back ... somewhere ... to get one more quarter or another fifty cents or so. Repeatedly, somehow, and we're not sure where they went to, although eventually a parent type came over and scolded one for running off with no hint where she was going. ... And they felt they were getting a great deal, although in truth we'd planned to donate almost all the stuff they were looking at to a thrift store. But, there is something great when you're a kid about getting to buy something with your own actual money, and to even negotiate with an adult for stuff. The adult was going easy on them --- one kid talked her down to a bunch of stuff for a quarter, and turned out to have only two dimes --- but, still. When you're that age any interaction with an adult who isn't being condescending is a treasure.

The take was about the same $60 as last time, and

bunny_hugger, observing that the majority of stuff that actually sold was his, proposed splitting the take two-to-one in his favor and he didn't argue. He did take back a couple things he thought he could do something with, but otherwise we've got a basement with fewer things, all of which we figure the thrift store can deal with. We used much of our share of the proceeds not to get pizza --- her father wanted to leave right after the sale was done, and he'd declared that was his intention at the start of the day --- but to join the mob gathered around the ice cream truck. This was pretty consoling.

Also this time we've been clear: we are not doing this again.

I don't mean to sound sour. But we've had three of these since I moved in and they've all been the same thing, with the same results. I think the fundamental problem is

bunny_hugger and I don't collect the right kind of stuff for a garage sale. We just don't buy durable goods that we end up not needing, like bread makers or book shelves or mini-fridges. If we do have one, we use it until it's broken, at which point it's not salable. We'll wear clothes until they've got too many holes to patch. Pretty much all we have that someone would buy are books, and those we can sell to the bookstore with far less effort.

bunny_hugger's father buys a lot of stuff, mostly on eBay, and while it might be worth it to someone to find, like, an antique ice-cream scoop, they're going to find it on eBay, not in a small front yard on a house in the middle of the block off of the third major east-west neighborhood street.

So, enough of that.

Trivia: Pratt and Whitney's first commercial jet engine was ready in January of 1950. Source: Mastering the Sky: A History of Aviation from Ancient Times to the Present, James P Harrison. 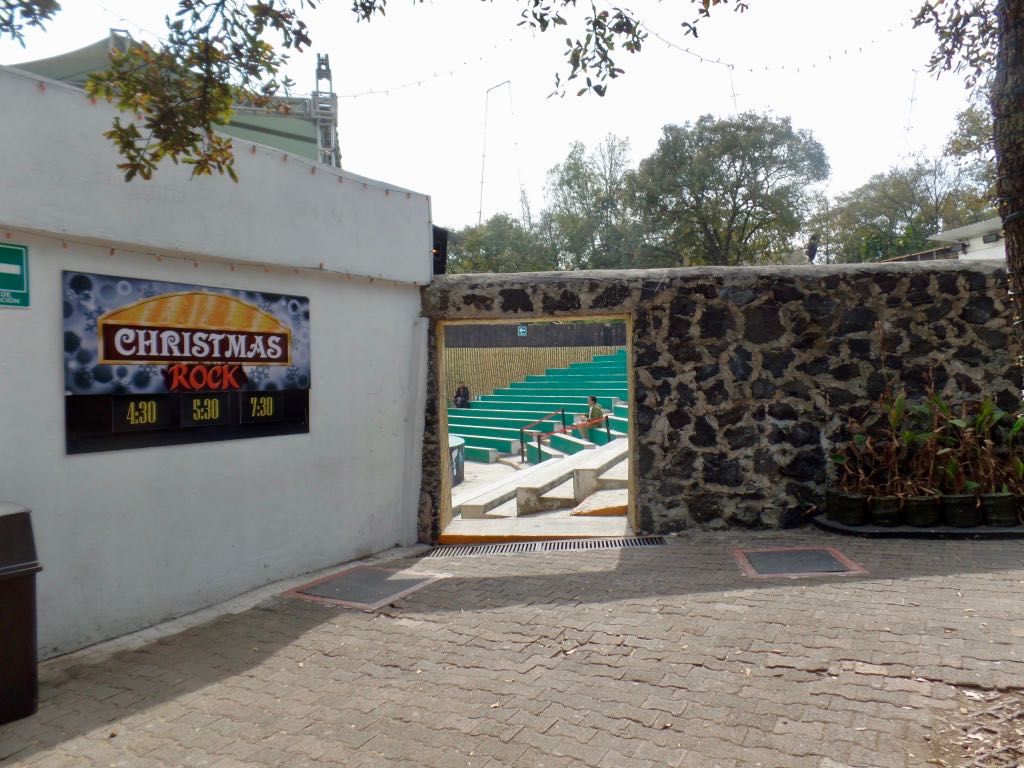 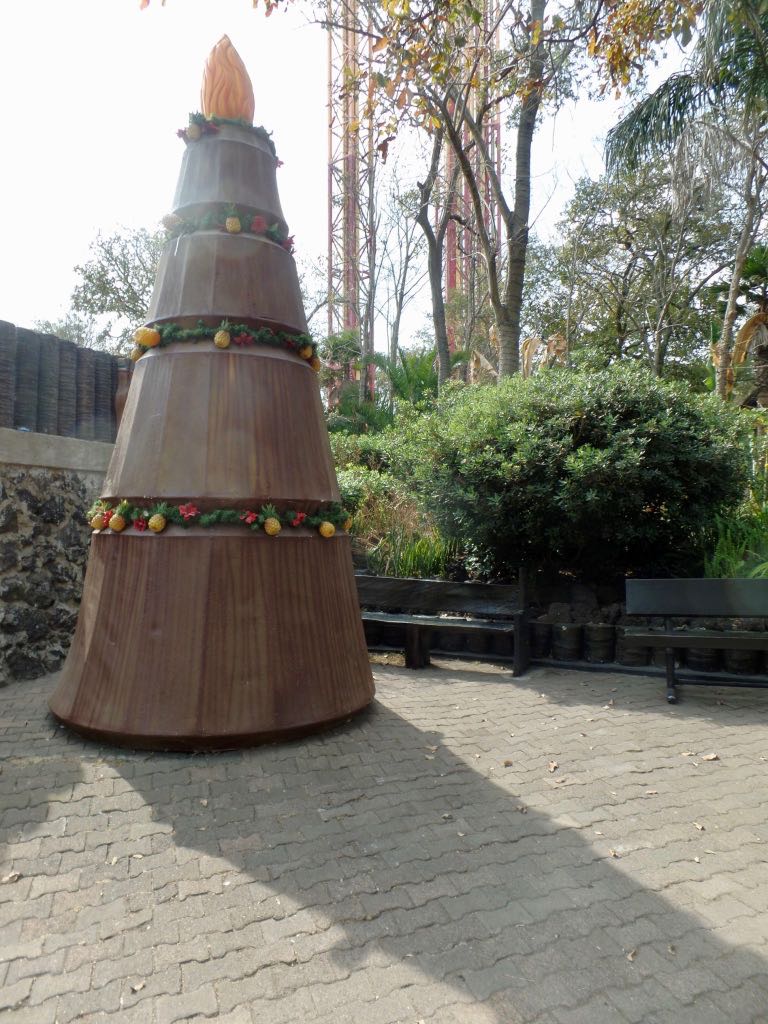 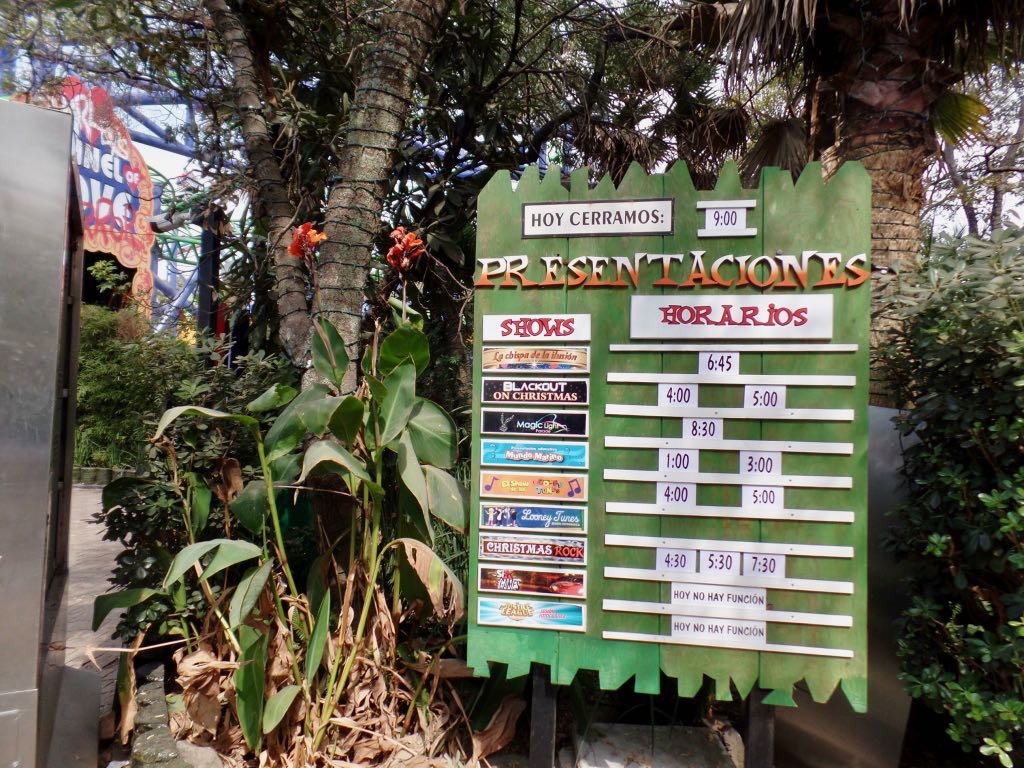 Show schedule for the day we were at Six Flags Mexico.