There's a rainbow in Toronto where the Maritimers are bold

bunny_hugger hadn't been to in ages and I had never visited. Seabreeze, in Rochester, New York, is an ancient amusement park with (they claim) the oldest continuously-operating roller coaster, and we've wanted to get there for years.

bunny_hugger found other parks that would be in the vicinity, and that we could pick up as time allowed. The big, weird constraint: this early in the season? Parks close early, especially up there. Seabreeze we'd have to visit on a weekend day to see at night. But she found a hotel that was not close to any of the parks we might visit, but that wasn't far from them either. We could have a nice central spot and get to parks as time and weather allowed.

For a wonder we set out driving --- I logged our whole visit at about 1,019 miles, two-thirds of the Keeweenaw Peninsula visit last year --- just about on time.

bunny_hugger's parents would watch Sunshine. And we had just gotten all the fish out of the basement and into the backyard. This was thanks to trapping. Also to my realization that the siphon I used to change the waters could also drain the tanks to the point I could grab any fish who wouldn't be trapped.

bunny_hugger found several letterboxes along the route to our Toronto hotel. Two of them would be on the United States side of the border, and one on the Canadian. It promised to break up the ride a little at least. The first one was at a rest area quite close to us --- we pass it when we visit MWS --- and we did not stop for it. The weather was against us. It has been a very rainy spring, here in Michigan, and the week was no less rainy. We were getting intermittent downpours and, as we approached the first rest area, a new one was coming up. We figured to let this wait for some other time. Maybe get the next rest area.

At the next area ... yeah, there was a bit of a gap in the clouds. We pulled over to a rest stop that was surprisingly high relative the road. I expect hills like this in New England, not Michigan. The letterbox clue was, per tradition, confusingly written (what does it mean to line up with a tree?) and we started out looking in the wrong grove of trees altogether. But a fresh start and we found ... it was starting to rain again. All right. But we found the letterbox, and to our delight even a hitchhiker, a miniature letterbox hidden within the bigger. Great success to start the day off. The letterbox had taken some damage and we replaced its torn zip-lock bag with a fresh one, for better waterproofing. We did not leave the hitchhiker we'd picked up in Ohio behind; we thought we could get that one a little farther yet. This would be the first time

bunny_hugger's had two hitchhikers in her kit.

And east we drove on I-69. This would take us to Port Huron, and the first time I've driven into Canada. And, apart from airplane layovers, the first time I've been in Canada. Somehow I had just missed the experience. The weather, meanwhile, misted this experience. As we approached the bridge we could barely see its far side. The weather forecast was for a lot of rainy days.

bunny_hugger asked if we should postpone this whole thing altogether. We didn't have any tickets or reservations or anything that were time-limited; if we cancelled, all we would lose was the time we'd spent driving. While I'm usually the one suggesting we write off our sunk costs, I said no. It hasn't been like this was the rainy week of the season; there wasn't much reason to think a week later would be any better. And while the forecasts for rain kept saying rain, they had also been forecasting less rain. Things might work out all right anyway.

So we got to the bridge, which is a pretty high one emerging from a Port Huron neighborhood. I wondered if there were any houses underneath. We paid the toll, drove over, and then stopped at the customs checkpoint. We had our passports ---

bunny_hugger had her brand-new one --- and I had my car insurance card as my father had worried us with his claim that we needed proof of insurance. It turns out you need car insurance, but they didn't check any time we crossed the border. OK, then. The customs officer asked the purpose of our trip and destination. I offered tourism, and Toronto. That we were going to Canada's Wonderland. And then I thought, like, we're hundreds of miles (and even more hundreds of kilometers) from there. Would he know I wasn't being sarcastic? Bear in mind, I come from a sarcastic family; we always sound like that, even when we're just talking about nothing emotionally charged. But no, he knew the amusement park, and he said he hoped we didn't have tickets for tonight. No, we were planning on going the next day. He said good, tomorrow should be better weather.

And there we were, the first Canada leg of our trip begun.

Trivia: The 52 acres which Random Olds bought in Lansing in 1901 for the Olds company cost about $35,000 less than the purported price for five acres of land the Olds Motor Works purchased in Detroit in 1899. Source: R E Olds: Auto Industry Pioneer, George S May.

PS: Six Flags Mexico was closing for the night, so let's see how long I can drag that out in pictures. 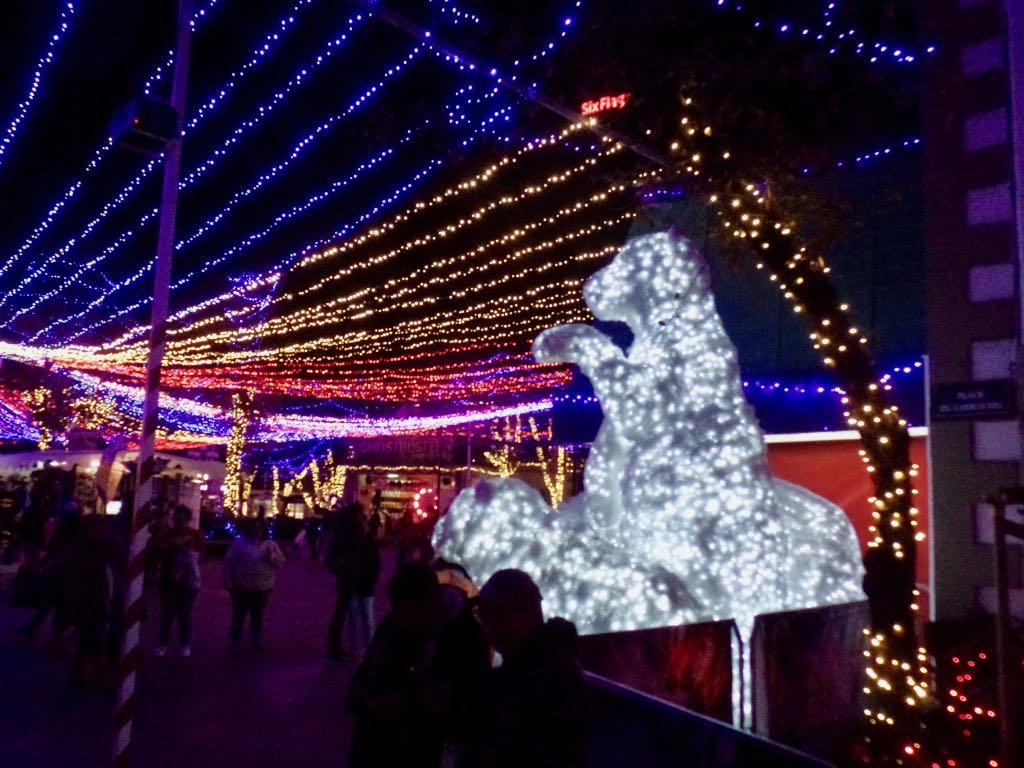 A last look at the polar bears and the carousel pavilion. 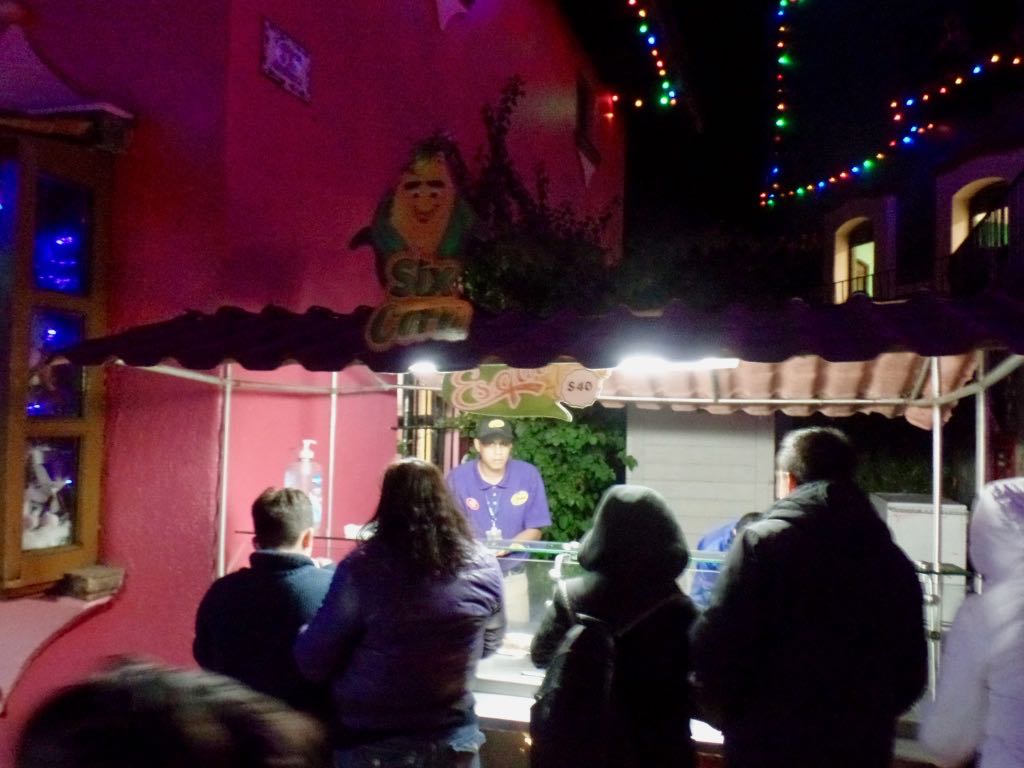 ... Six Corn? ... All right, if we could have Six Pizza, why not Six Corn? I don't remember having seen this earlier in the day. 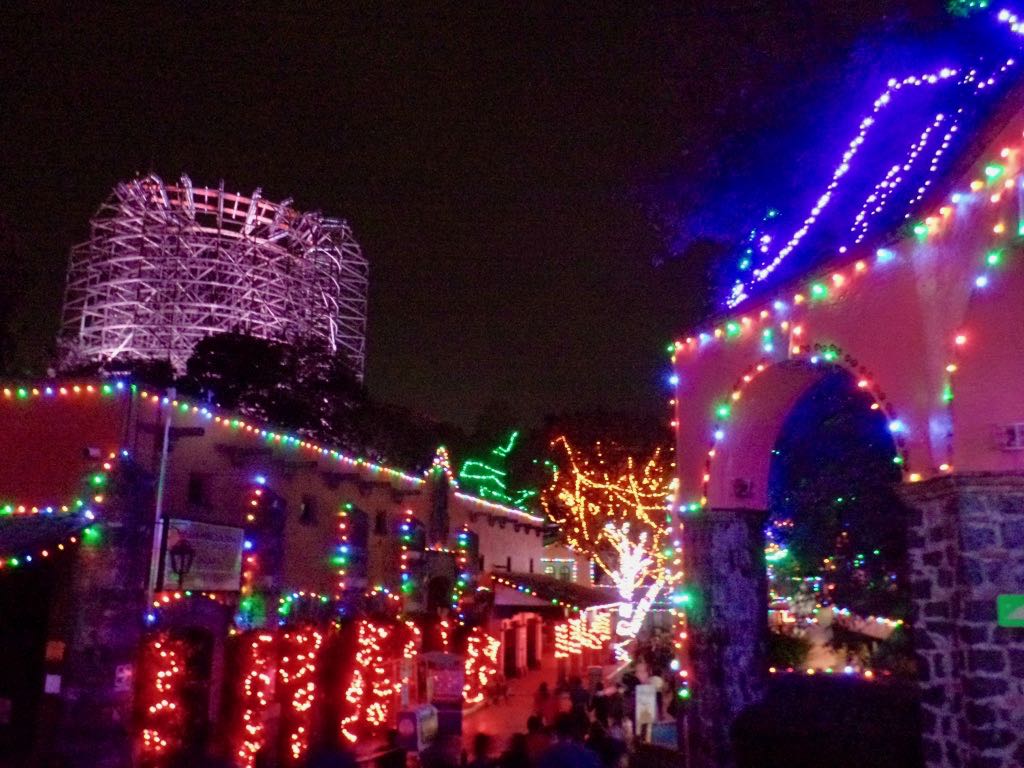 A view of Medusa Steel Coaster from above the plaza near the front of the park.