After we got into Canada we had mostly highway 402 to drive. And we had one of those nagging doubts: had

bunny_hugger brought her laptop? I had moved most of our luggage into my car that morning, but her laptop had been one of the things I didn't touch, in part because she had the checklist on that. She couldn't remember putting it in the car, though. We had the backseat down, but she couldn't see it in the back, and she didn't remember seeing it when we had been out getting that first letterbox. So we took a detour off 402 to check the backseat and, yes, her laptop was there. It was just behind stuff.

There was a letterbox in a rest stop east of Woodstock. Finding the rest stop was taxing because we saw a billboard announcing it was just ahead, and then ... nothing. We couldn't figure how we'd missed a rest are, but we drove for a dozen miles without any hint of it. Finally we saw another billboard saying it was ten kilometers (or something) ahead and we could rationalize the first sign as having warned us so early about the rest area as to have been confusing and a bit alarming.

The letterbox was a new one, planted in January and not yet found. It was set off of a side parking lot, one roughly near a picnic area rather than the main rest area. We pulled up to the side parking lot, a few spaces away from another car, and a person who looked quizzically at us. But the person left pretty soon, and we could go about looking for the letterbox without being observed by any curious outsiders. The box was hidden in the line of evergreen trees along a fenced area of the property, easy to spot once you worked out which was the line of trees.

And we got there and opened the box and ... we were not the first finders. This box, which had rested nearly six months without being picked up, had a stamp in it. And a date. That day.

It's absurd to think that the other car in the lot we arrived was that letterboxer, right? And that we missed being the first-finders by minutes? On the other hand, why would someone bother parking off on the side lot where there was nothing, not even an open bathroom? Did they size up what we must have been there for?

The letterbox was themed to, according to my log, the Whitehern Window, a stained-glass window for a local building of historic interest. (Somehow I'm not able to find the letterboxing clue so I don't know how

bunny_hugger learned about it.) The stamp was made of this interesting clear rubber material that's a new one on us. It printed well, though, and better: when you had the stamp inked and pressed on the book, you could see through to the page being inked. This gave it a great impression of being a window, fitting the theme nicely. It also means it's sightly possible to check that you have pressed down on the whole stamp. Have to wonder whether this carving material is going to work its way into other letterboxes. There's obvious advantages to it.

(We think it's the same material used for a hitchhiker we'd picked up last year. It felt very similar at least.)

Inside the rest area we had our first stop in a Canadian Tim Horton's.

bunny_hugger had been mildly obsessed with the place her last Canada visit, a decade-plus ago, but since then they've colonized mid-Michigan. So we figured we'd only stop at a Tim Horton's when, like now, it was just the only place there to really get coffee. We would be hilariously wrong about this. ... Also our eyes were drawn to a New York Fries stand, with its promise of poutine. We figured we'd try that out sometime later. We would be merely ordinarily wrong about that.

That was it for major interesting diversions on our drive. We pulled up to our hotel. It was a pretty nice one for the standard of our usual amusement-park-visit hotels. As we entered the lobby a flock of people, there as part of an (Asian) Indian wedding party, were streaming out and in a rush and apparently determined to run into at least one of us. I dodged several times only to have someone swerve right for me, and

bunny_hugger had the same experience. The front desk had a sign welcoming people who were there for the wedding and I infer that this was a big crowd that was anxious and running late, although how anyone thought it would speed things up to collide with a couple people trying to check in is anyone's guess.

bunny_hugger thought the last person in the bunch looked horrified at the rudeness of all this, but clearly, there was a mission and we were just in the way.

Our mission, after settling in, was to find somewhere to eat. The challenge was finding someplace that wasn't in danger of closing on us, as it was already past 8:30.

bunny_hugger found an Indian restaurant that was open until 10 pm, and good. I tried putting forth that, of course, 10 pm Canadian was only like 7 pm American time, and she would not have that joke at all, wisely and correctly cutting off a long string of potential merry conversion nonsense right at the start of our trip.

We were the only people sitting at the restaurant, although a couple people came in for take-away meals. It was a pleasant spot, with an entirely vegetarian menu, something that made it easier to order with confidence. The menu didn't list what the ingredients of any meals were, and it did list shahi paneer twice, like four lines apart. The price was the same for both shahi paneers, though. It was really good Indian food, too. And the music --- well, that was odd. It sounded mostly like Indian pop music, but the songs kept cutting out and restarting, as if someone's iPod were skipping. Still, it was a great place for dinner and we figured we would certainly come back, if we had the chance, which we would not.

Trivia: On the 21st of February, 1862, Nathaniel ``Nat'' Gordon was hanged for illicit slave trading; the first and only American hanged for that federal crime, declared equivalent to piracy four decades earlier. Source: Smuggler Nation: How Illicit Trade Made America, Peter Andreas.

PS: I'm almost out of Six Flags Mexico a this point in my photograph review. Do I make it? Look on! 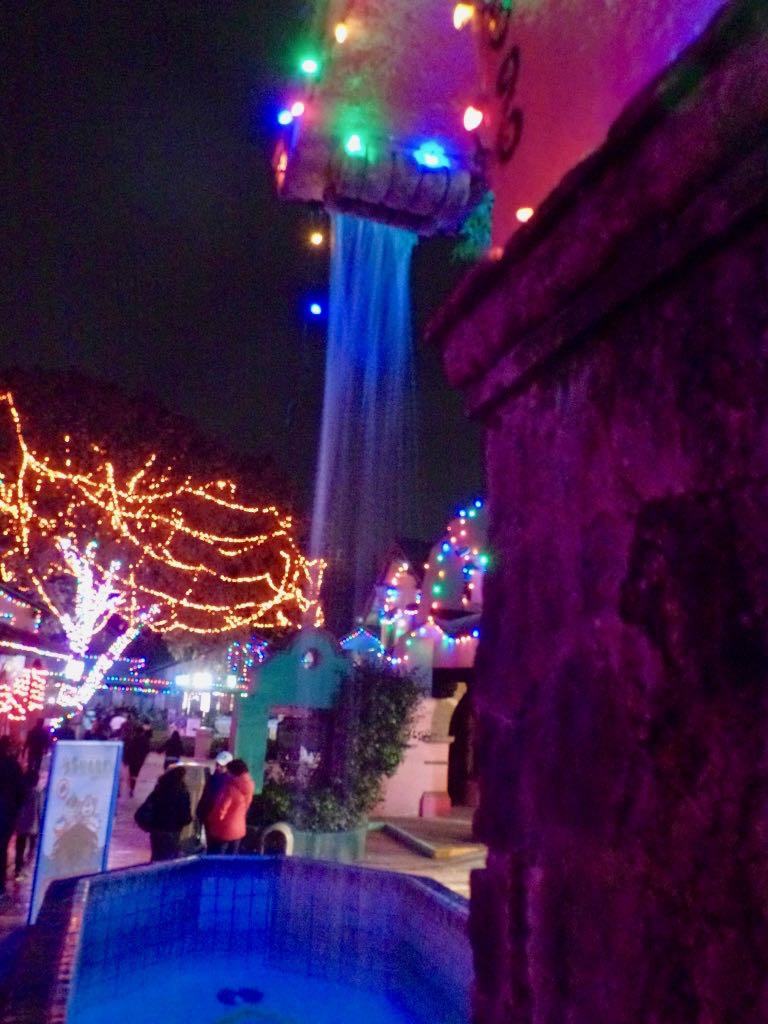 Water pouring out the mouth of an Aztec-styled dragon head and into the basin below. I hadn't noticed it earlier in the day (maybe it wasn't on?) but by night it was exactly the kind of challenging play of lights and shapes I can't resist photographing. 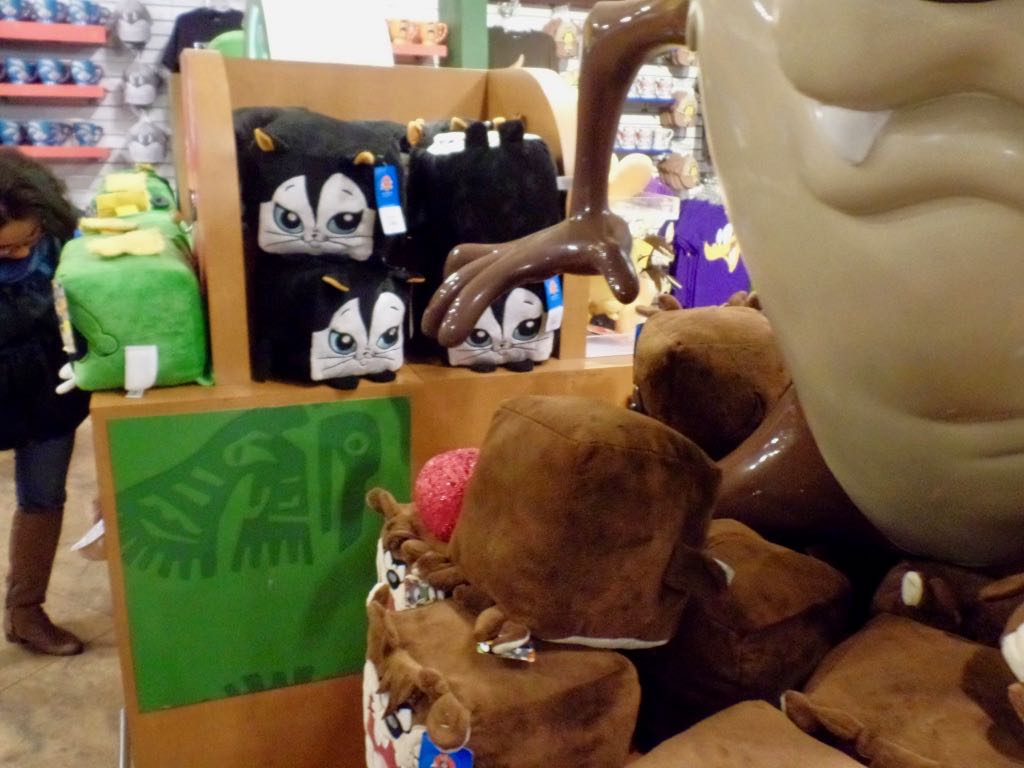 In the front gift shop were these odd cubical plush figures. And I don't know what to make of the cube plushes of that kitten from the cartoon where the bulldog is horrified that the kitten got chomped up and flattened by the industrial machinery. You know?