We went into Canada without any real currency. Maybe C$3.50 in a toonie and some quarters picked up in loose change. We figured at some point we'd stop at an ATM and get some of the local scrip. But on our drive in, we never did; we used credit cards for gas and the restaurant and all that. Ultimately we'd never get any Canadian bills, and the only currency exchange we'd do was when I got four quarters for a US dollar out of a bilingual change machine. But this is relevant in today's story only because the satellite navigator's path from our hotel to Canada's Wonderland took us onto a toll road. I worried about how we'd pay at the booth, and never came to a toll both. We just passed signs warning that non-Ontario plates would be billed by mail. So I guess they're photographing license plates and sometime I'll get a notice from the province? Anyway, really feel good about the surveillance state thinking of me like that.

Canada's Wonderland was built in the 70s (it opened 1981) by Taft, the company that also built Kings Island and Kings Dominion. It used roughly similar design philosophies for each park, to the point that

bunny_hugger's memories of her first trips to Kings Island and to Canada's Wonderland merge together. The park is now part of the Cedar Fair chain, so our passes for Cedar Point and Michigan's Adventure would get us admission. The entrance was just off the toll road, like, immediately across the street from the off-ramp. That was disconcerting. The front gate, of a style like the current Michigan's Adventure, faces a major road that itself is opposite some strip malls. So, like, if we had wanted we could have gotten our hands stamped, gone out to Subway for a lunch at civilian prices, and gone back in. We didn't, but the option was there.

Like Kings Island, the front of the park has a wide reflecting pool with International-themed gift shops around it. And here a park employee came up and took photographs of the two of us which, ultimately, we would buy as souvenirs. In front of the reflecting pool is the Canadian flag rendered in flowers. Behind the pool, rather than a one-third-scale Eiffel Tower, is a mountain. Wonder Mountain is this massive concrete construction, with two layers of waterfalls leading to the reflecting pool. Apparently in the old days you could walk around it as a viewing tower; that's long-since gone. Several roller coasters go through the mountain now, though, or above it, and it dominates the skyline and any impressions of the park.

So perhaps unwisely, we started our riding day with the Wonder Mountain rides. I say unwisely because it turns out --- we hadn't checked --- that Canada's Wonderland has seventeen roller coasters. This is as many as Cedar Point has. We normally take, like, the three days of Halloweekends to ride all of those at Cedar Point. What chance would we have in one day at Canada's Wonderland? We had thoughts that maybe we should have planned a two-day visit. But we resolved, you know, we'll do what we can and enjoy that. But after the Wonder Mountain rides we would go by priority, the things we'd feel worst about missing. There were some roller coasters --- the wild mouse, the one that's a clone of Michigan's Adventure's Thunderhawk, the boomerang shuttle coaster --- that we wouldn't feel bad about missing. And it would turn out there was one kiddie coaster that doesn't allow unaccompanied adults. Still, it's a lot of riding to hope for in a twelve-hour park day.

Thunder Run is a kids' coaster, with a train that has a real, like, steam-locomotive-shaped train out front. It goes around a short spiral twice. Its second time through the station the ride operator says ``Choo choooooo'' into the microphone. It's fun and it left me with strange operational thoughts. Like, someone was the first person to think of choo-choooooing. Who was that, and what was their inspiration? When did this become standard? Are operators obliged to do it, or do they just do it because it's kind of fun and gets a good crowd reaction and why would you not do it then? ... Anyway, the train goes outside and inside the mountain. Inside it spirals around a nice giant dragon head that

bunny_hugger missed on our first ride. I tipped her off to where it was and where to find it so she didn't miss the next trip.

Thunder Run was one of the five original roller coasters at Canada's Wonderland; it was there the day the park opened. Curiously, it wasn't built into Wonder Mountain when it first opened. It was moved into the mountain in 1986. I don't know where it originally was. There's a ride video on Canada's Wonderland's web site, although good luck finding the dragon there. (Its eyes do glow, which might help.)

Our next stop was the bathroom built into Wonder Mountain, which it turns out was there from the original construction. That's fun. I like a good thematically interesting bathroom.

But our next ride was Wonder Mountain's Guardian. And it's a roller coaster ... I ... guess? It kind of challenges definitions. It's built into the mountain, and in fun ways. There's ``fossilized'' dinosaurs in the ``cavern'' walls, for example. Also actual fossilized footprints of a groundhog who visited the platform when its concrete was still wet. But what's challenging about this is that it's partly an interactive dark ride: you have laser guns that you point at targets to make stuff, much of it on giant video screens, happen. It feels much like a roller coaster, since you start out by ascending a lift hill and you go on a short track around and through the mountain some. But then you get into the interactive part where ... honestly, it just feels immoral. You get dropped into some kind of dragon workshop and everyone stops their work to fight off you, the intruders. And yeah, they're shooting arrows and throwing spears at you, but, I mean, it's their goldsmithing you're interrupting. I don't think it's just that

bunny_hugger and I are furries and inclined to take the dragon's side in a quarrel like this. I think we've just reached the point in life we can't enjoy shooting somebody without a moral context.

We stopped to take a good serious look at our maps. And in the garden planter nearby noticed something: a groundhog. We're always fans of wildlife at amusement parks, and this was a good-size and not-particularly-shy groundhog poking around. It gave

bunny_hugger some nice long looks, and she watched, not reaching for her camera lest she scare the creature off. That was a great moment, though.

After the groundhog went back to its business a young woman came up and asked our help getting to the water park. (We had a park map open, which is part of why we looked ready to be asked something.) We did our best to guide her, but admitted we hadn't been there before. Our advice was that the water park was beside this particular roller coaster, and that would be a landmark. We will never know whether we led this poor person astray. But we gave our sincerest best advice.

Trivia: The General Diet of the Hanseatic League met, three times out of four, in Lübeck, though other cities would host it. Source: Gold and Spices: The Rise of Commerce in the Middle Ages, Jean Favier. (Meetings were not regular. Lübeck was a very central town.)

Currently Reading: Masters of Empire: Great Lakes Indians and the Making of America, Michael A McDonnell. (It probably won't surprise you to learn but a lot of the last week and a half I haven't actually been reading anything, rather than taking my time through a book that's only like 350 pages. But, like, half that week we were on the trip I'm describing, and then there was post-trip expeditions, and a day out at pinball, and other stuff that took me away from my normal reading times.)

PS: Here they are! My final pictures of Six Flags Mexico! 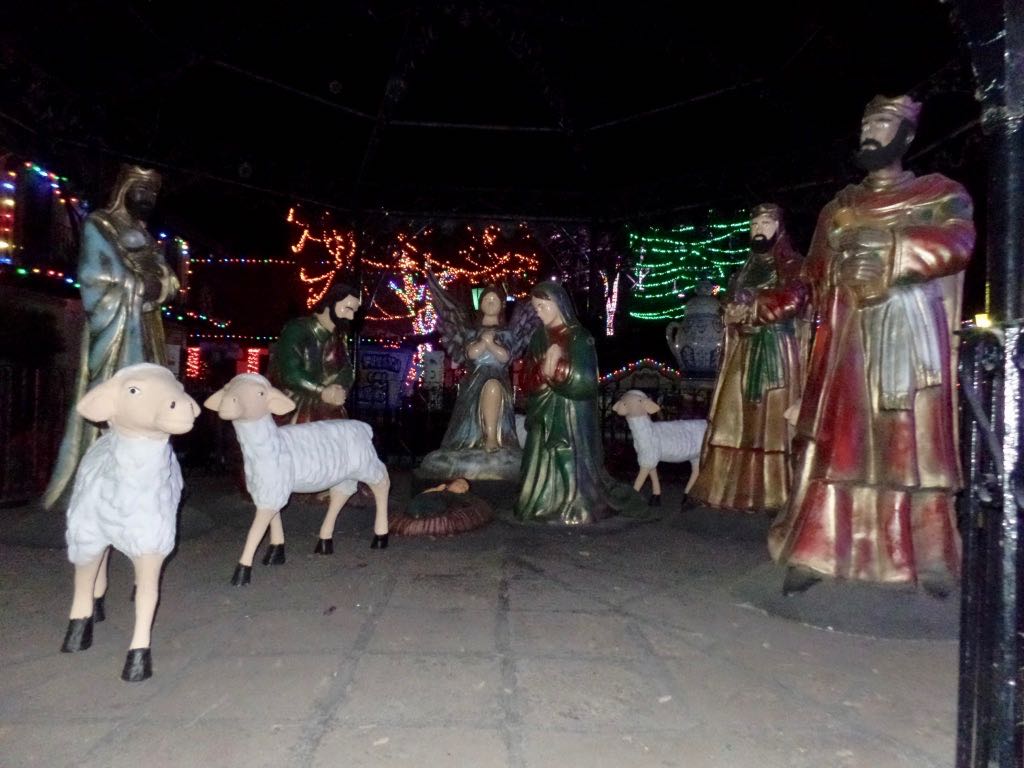 Flash photograph of the gazebo up front with the nativity scene inside. 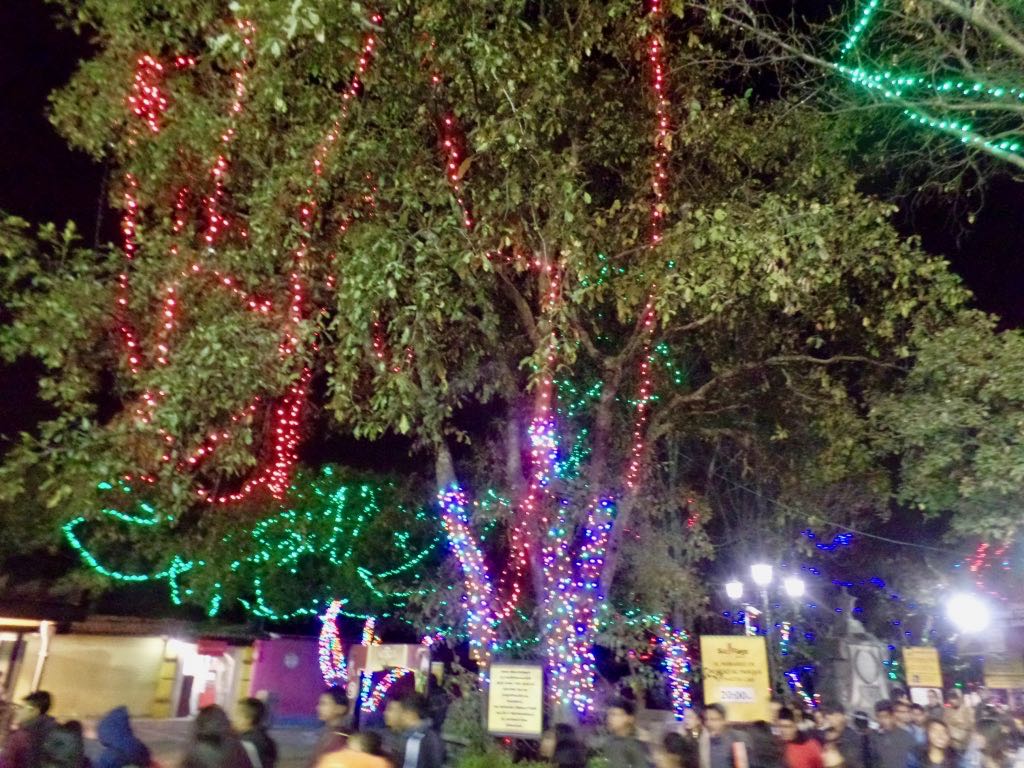 A non-flash photograph: near the entrance there was enough ambient light you could see both the trees and the lights around the trees. Notice how the crowd's just pouring out of the park. 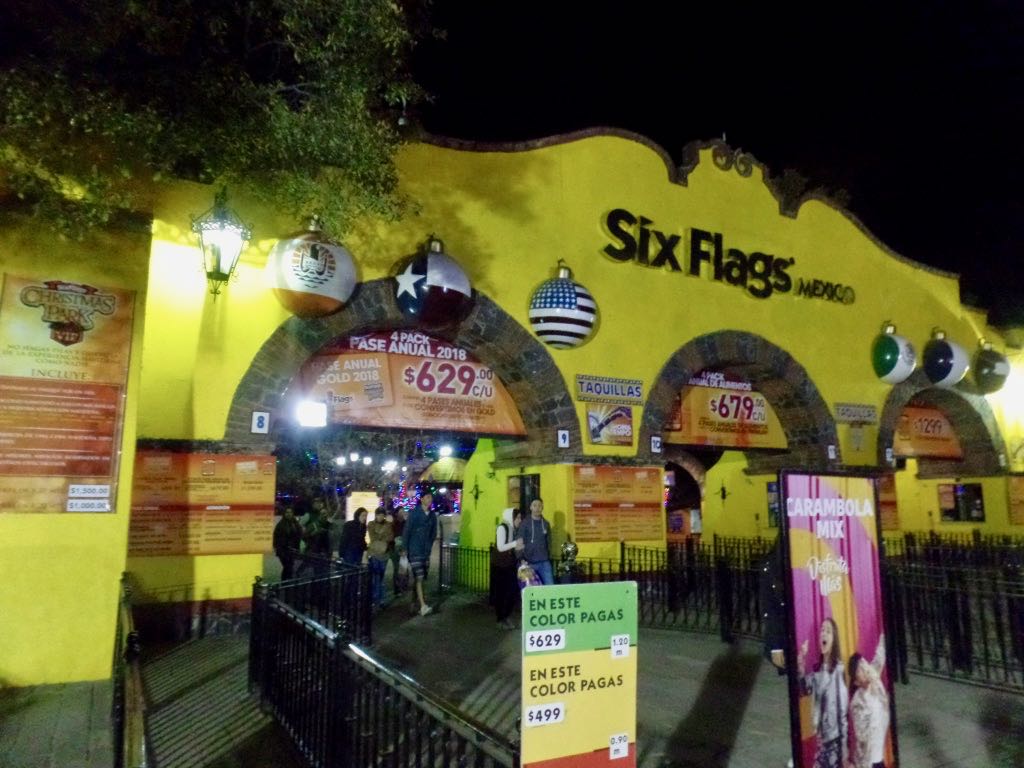 A last look at the entrance to Six Flags Mexico. Fun park. Would be nice to see it again sometime.