It happens we nearly followed the young woman who'd needed our map-reading skills. We figured to go next to the wooden roller coasters. Canada's Wonderland has several, including three that were part of the park's original set. The Mighty Canadian Minebuster is one of those. It's in the Frontier Canada-themed park area, just next to their brand-new Yukon Striker. The Frontier Canada themed section of the park is also new, oddly. Wikipedia says a Canadian-history-themed section was always part of the park's original design, but it took from the opening in 1981 to this year for the section to be organized. I don't know what theme the area had before 2019.

There was only a short line. A slightly tricky one to get to: the entrance queue starts the same path for regular and Fast Pass line-cutters, and

bunny_hugger doubted we, who refuse Fast Pass, should be going down there. The queue splits into the regular and the line-cutter paths later on. The queue looked longer because of the loading station. The station had ample room and railing queues for each of the rows on the train, but they were being kept empty. The gate attendant only let through one trainload of people through, and only when a train was coming to the station. Not sure why, but sometimes Magnum XL-200 at Cedar Point runs the same way. Minebuster is a fun ride, a wooden out-and-back roller coaster. It goes off a good distance, past much of the waterpark and back again, and even gets into some remote areas. It's no long, remote wilderness coaster like The Beast at Kings Island, although our night ride on it --- after the water park closed --- had some of that feel of rambling off into the darkness.

We noticed a ride information plaque, something we'd come to realize was on every ride at the park. This gave the park and ride name, but also things like the manufactured name and the year of manufacture and recommended speed and all. The recommended speed for this was 'Gravity', something common to several but not all of the roller coasters. What struck

bunny_hugger was the manufactured name of this was 'Shooting Star', and there was some mention on another plaque that it was inspired by the ride at Coney Island.

So ... Coney Island, New York? Because so far as we knew offhand there was no Shooting Star at any Coney Island amusement park. There was a Shooting Star roller coaster at Coney Island, Cincinnati. And Canada's Wonderland was built as a sister park to Kings Island, the park made by rebuilding the parts of Coney Island Cincinnati that weren't still underwater. So it would make perfect sense for Kings Island to build a roller coaster replicating the old Shooting Star. It would make some sense for Canada's Wonderland to make that, since the company building the park had the rights to the old roller coaster. But why put forth a claim about Coney Island Cincinnati, a park that any Toronto-area resident would identify as ``probably something you just made up''? I guess by saying it's from Coney Island they were putting forth a claim that was true but that any reasonable reader would think was about Coney Island, New York City, the more prestigious park. It's all a weird adventure in signage.

So as I make it out, that was the 225th roller coaster that I've logged. It's a minor milestone. We didn't take a picture of it to send to the American Coaster Enthusiasts, though.

Yeah, I'm not finishing this trip report before, like, Pinburgh.

We were ready for lunch. One interesting-looking stand offered macaroni and cheese. A more interesting-looking stand offered poutine, but the line for that was out the door. So macaroni and cheese it was, and the line for that was less bad, but still long. We made the planning error of having lunch between noon and 1 pm and by the way Pinburgh this year is the 1st through 3rd of August so you can plan when you want to start reading me again.

But I mention this mostly because we also got cups, for pop, only to discover there weren't any fountain drink machines at the macaroni-and-cheese place. The cashier --- the lone person working the lunch rush by the way --- told me we should just use the fountain drink machine at the poutine place. Which was at the end of the queue there. Like, you could get at it without waiting through the line, but you did have to open up the exit gate and hope someone would give you space to work. This probably is no trouble away from peak meal times, but it left us feeling like pushy jerks. We'd find a nice shaded spot to eat lunch, and afterwards went back to the poutine place to refill our pop. This felt illicit, but we had the all-season drinks pass, and they had told us to just go up to the machine and refill, so what could they expect us to do?

Our next ride was another wooden roller coaster, one of the park's original rides. This would be ... well, we visited it as Wilde Beast. Before this year, it was known as Wild Beast, and that's how the manufacturer's plate identified it. Before 1996, it was known as Wilde Beaste, which is what the Manufactured Name on the manufacturer's plate identified it as. Why all the renaming for a cute little ride like this? That's a fine question, and to get right to the heart of the matter, ? ??? ?? ???? ? ?? ??? ??? ? ?? ??????. It's a figure-eight roller coaster, so now you know what path it follows. Its design is based on another Coney Island Cincinnati roller coaster, Wildcat, which had closed in 1964 (before the near-extinction of Coney Island). Wikipedia says it also appeared in a Fraggle Rock episode, which is neat.

I get the idea of using ``Wild Beast'' as a name, especially in 1981 when Kings Island had just opened their impossibly popular The Beast. Mixing that with memories of Wildcat and you get Wild Beast. This would be great if anyone in Toronto could possibly have remembered a roller coaster that closed seventeen years before, in Cincinnati. Why the semi-competent old-timey fake spelling? Goodness knows. The ride is in the Medieval Fair themed area of the park --- a strongly themed area, with everything looking ready to be a Disney Fairy Tale movie --- but still. ``Wilde Beaste''? I don't know why the spelling changes. On their web site you can get a ride movie, and see the obsolete Wild Beast logo, and in the URL see the current Wilde Beast spelling.

In front of the ride is a metal sculpture, of a large wild boar carved of iron. There's long thin strips of metal to suggest a shaggy mane, even, and the result looks great. It's a good, well, wild beast. There were just enough of these kinds of sculpture in the park --- such as a dragon in front of the Dragon Fyre roller coaster --- to make it mysterious that there were any, and that there weren't more.

Also decorating the park in odd places: signs on tall poles that made us aware of things like the distance to the second loop of The Bat roller coaster, which was 34 meters. Why would we wish to know this? I don't know. I get signs saying how far one is from the entrance queue, but distance to, like, the highest point of a ride or the end of the track of something? I would like someone to get right to the heart of the matter regarding this.

PS: More of the Cuicuilco Pyramid. 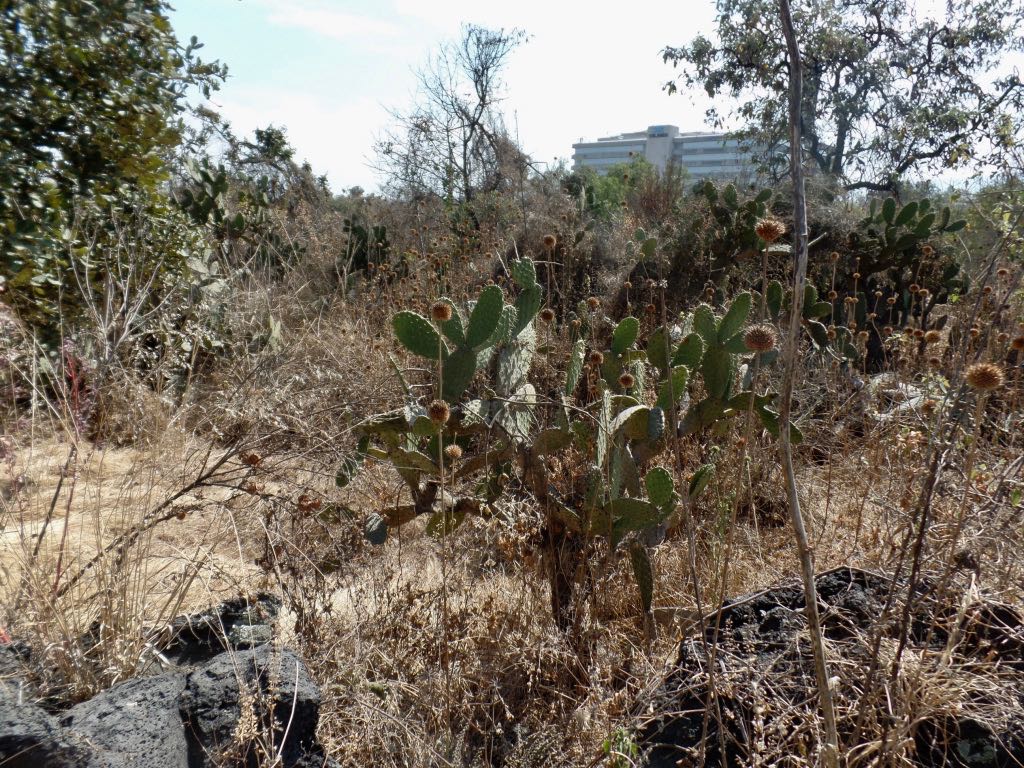 Part of the plantlife, and volcanic rocks, with a corporate(?) high-rise in the background, past the edge of the archeological site. 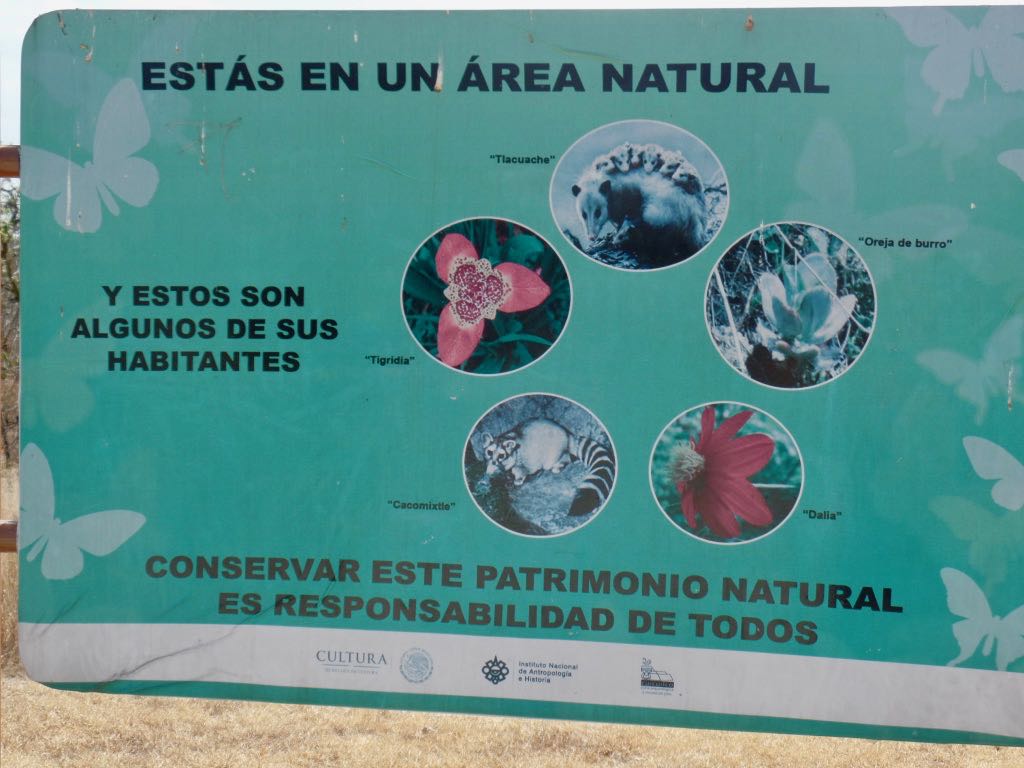 Which is more adorable: that picture of the opossum carrying her babies, or the way they spell ``cacomixtle''? Because, not gonna like, ``cacomixtle'' delights me. 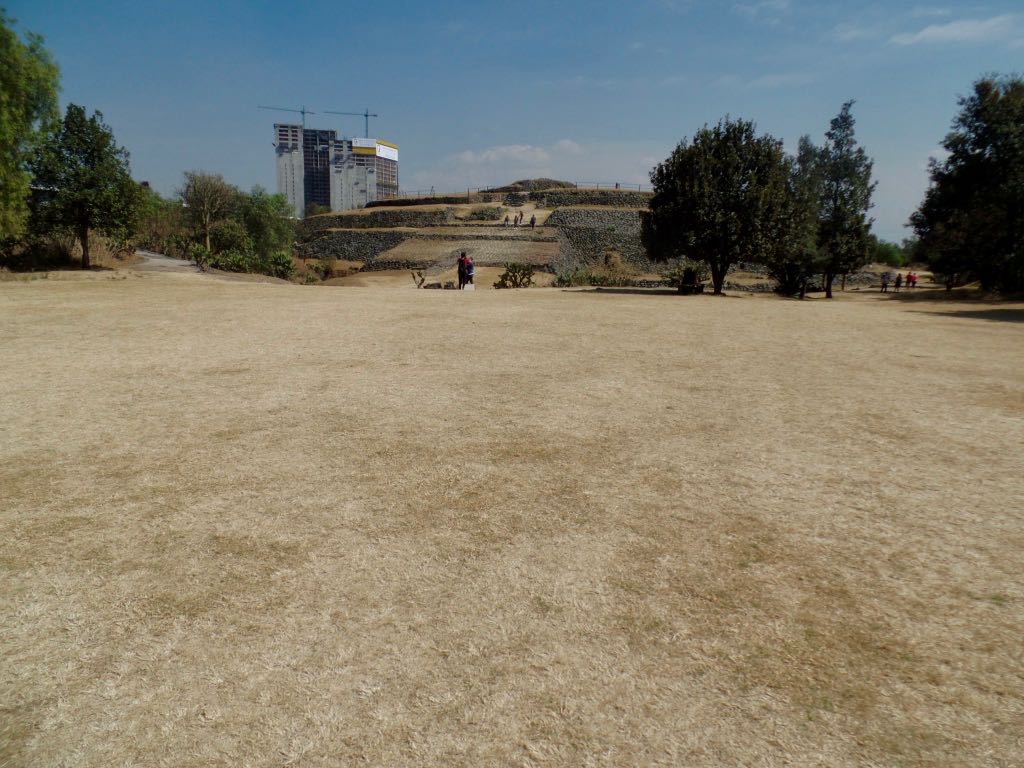 And a first view of the Cuicuilco pyramid. It's not a very tall one, but it's pretty substantial in size and, it turns out, you can just walk up the side like that as if that were a normal thing anybody could do?