In places all around you

[ Sorry to post late, everyone. I had just assumed that we'd be home early enough in the evening that I could schedule this post, and I also assumed that I had finished writing it and uploading images and all that, and it turns out absolutely none of this was true. Really it's a little amazing that this post exists at all. ]

Why have I not renamed my mathematics blog Reading the Comics? Because I keep pretending I'll get around to writing something else on it. Will I? Dunno. Here's what I actually published on it this past week, though:

One thing that is going on steadily? Me telling people important story comic-related news, such as What's Going On In Mark Trail? Did Mark Trail leave JJ Looper for dead or what? April - June 2019 plot in review.

And now let's see if I couldn't manage to sneak up on the Cuicuilco Pyramid yet. 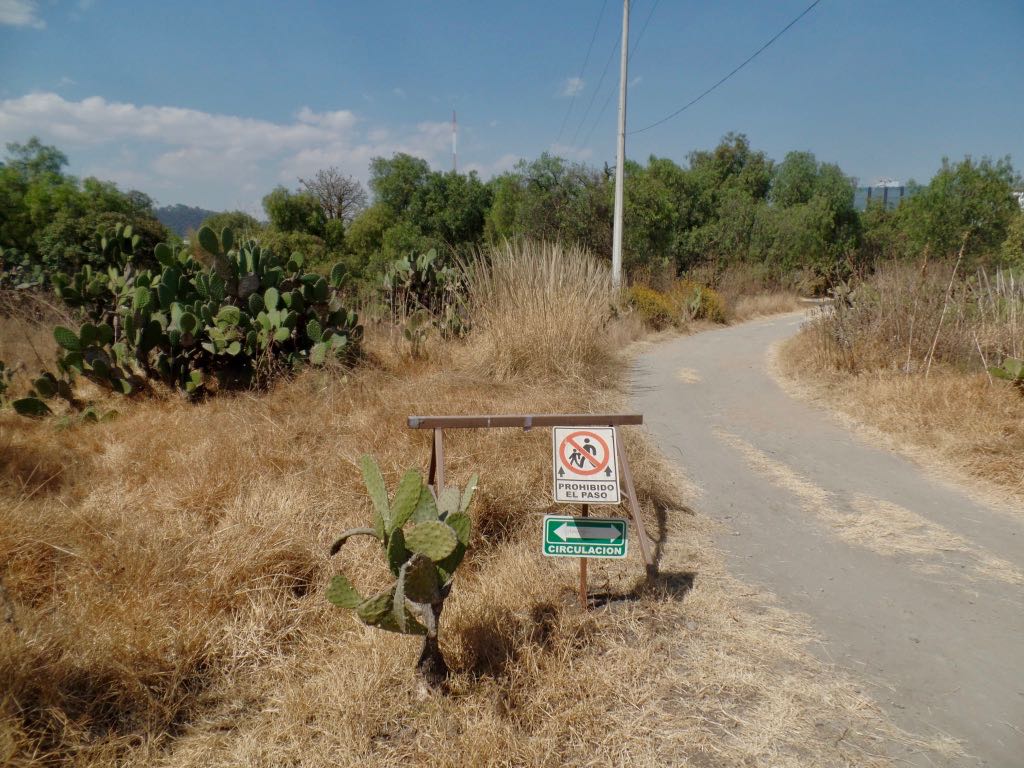 So, you know, don't go walking into that grove of cactuses. This seemed to be a service road that crossed the walking trails. I didn't see any vehicles but it's not like I was there all that long. 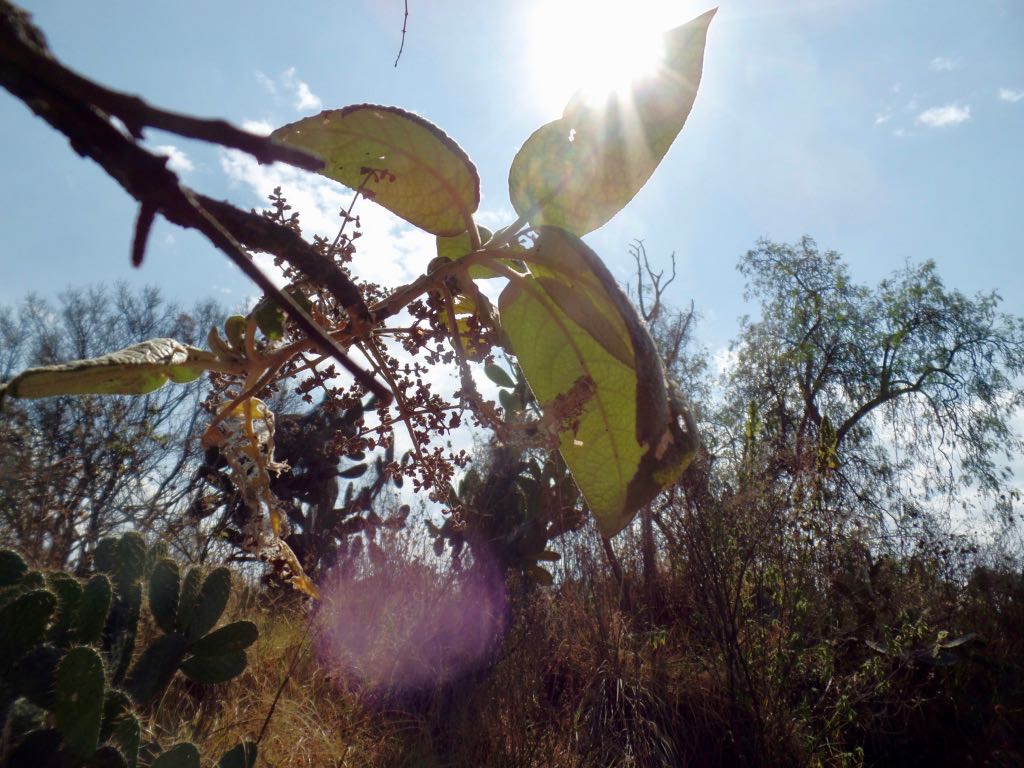 Leaves on a tree, caught in the light. It was January when I visited so this was winter, when the plants were as huddled down as they get for the season. So the plants weren't bare, exactly, but it was obvious I was seeing them in retrenchment. 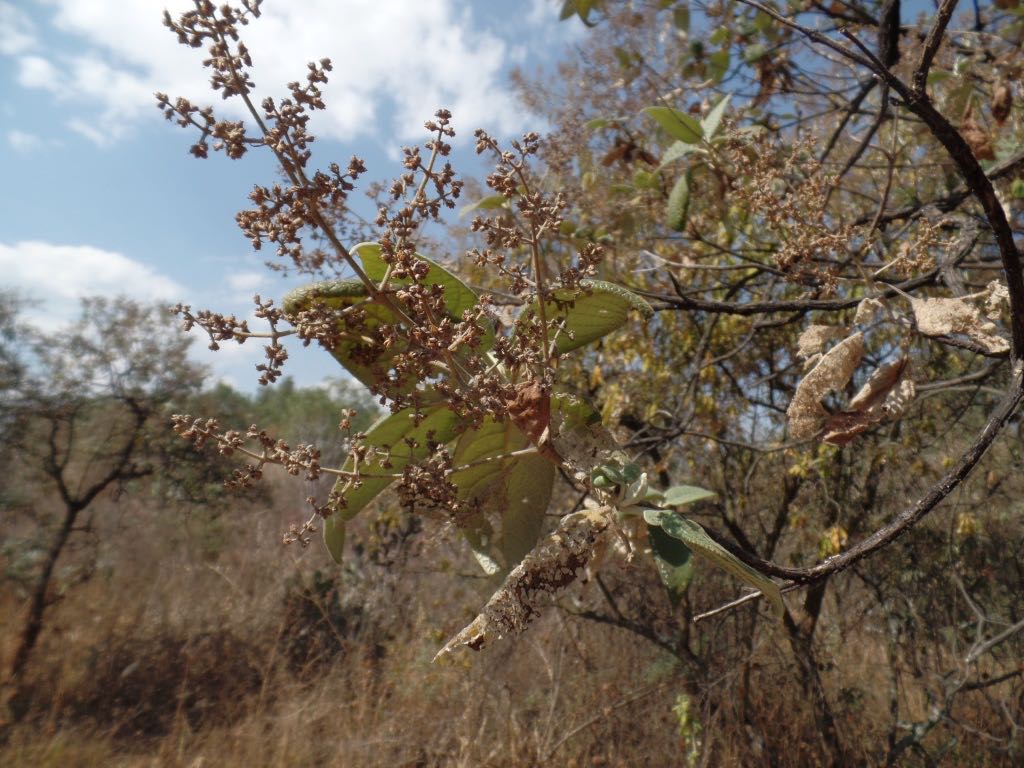 More leaves seen at what I trust is the hungriest part of the tree's year. 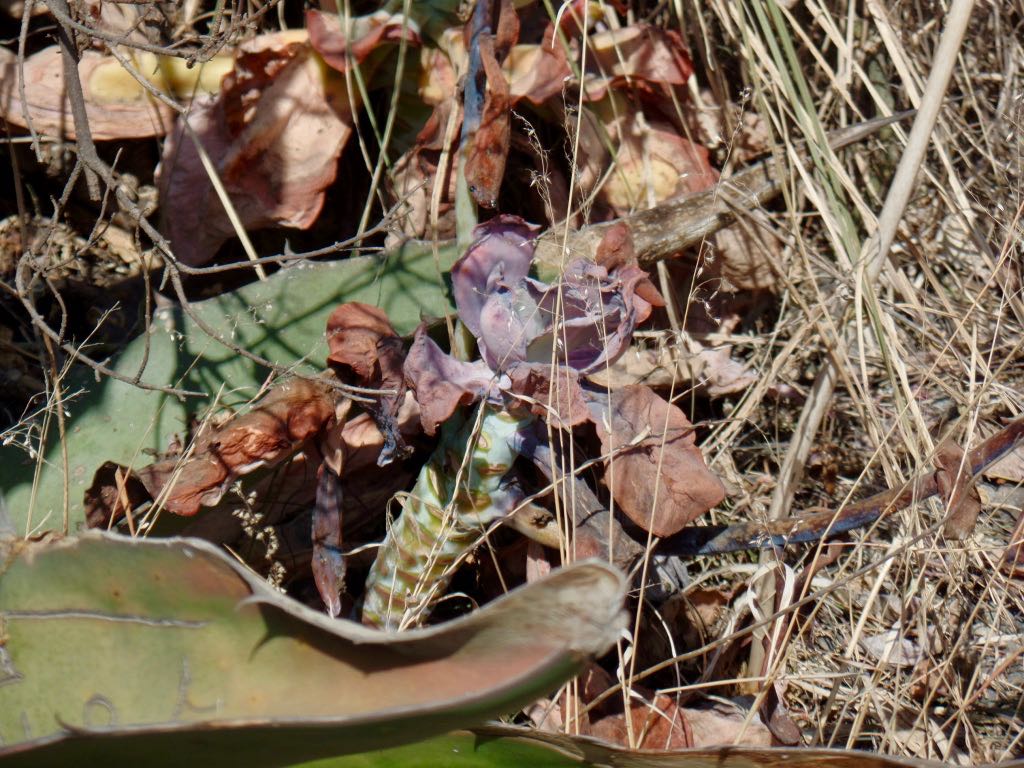 Despite the winter conditions --- you've noticed how much of the flora was just brown --- there were still colorful plants, like this purple one. 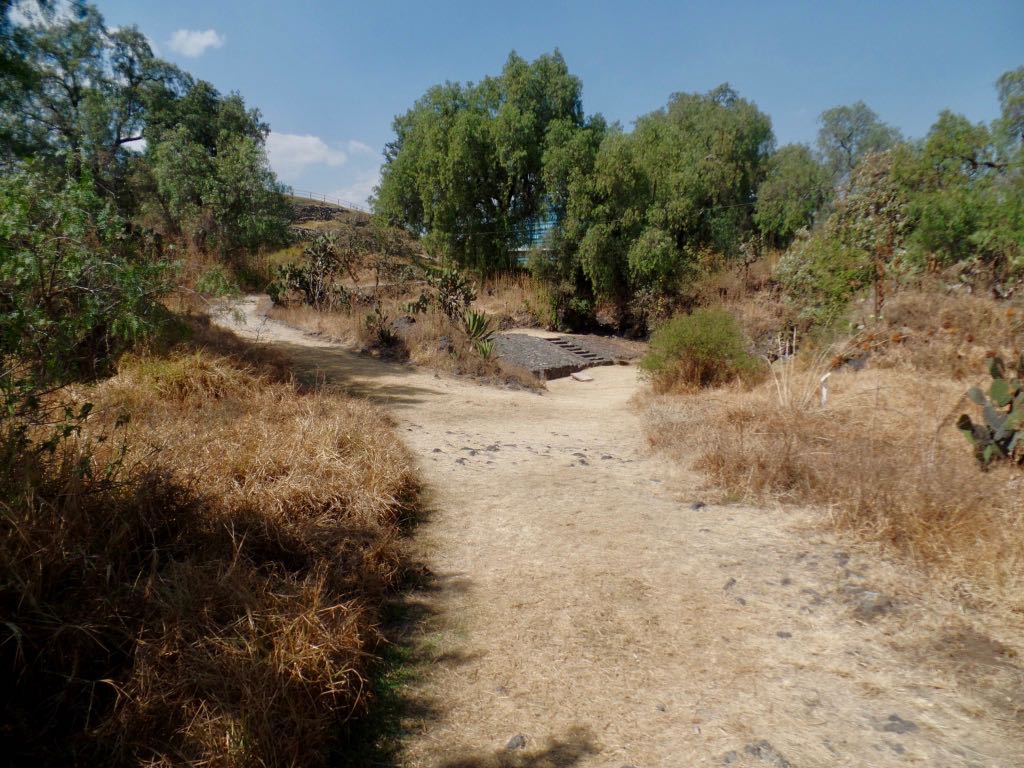 I'd gone the long way around the nature trail and come up on this structure, labelled E-1, part of the pyramid complex. 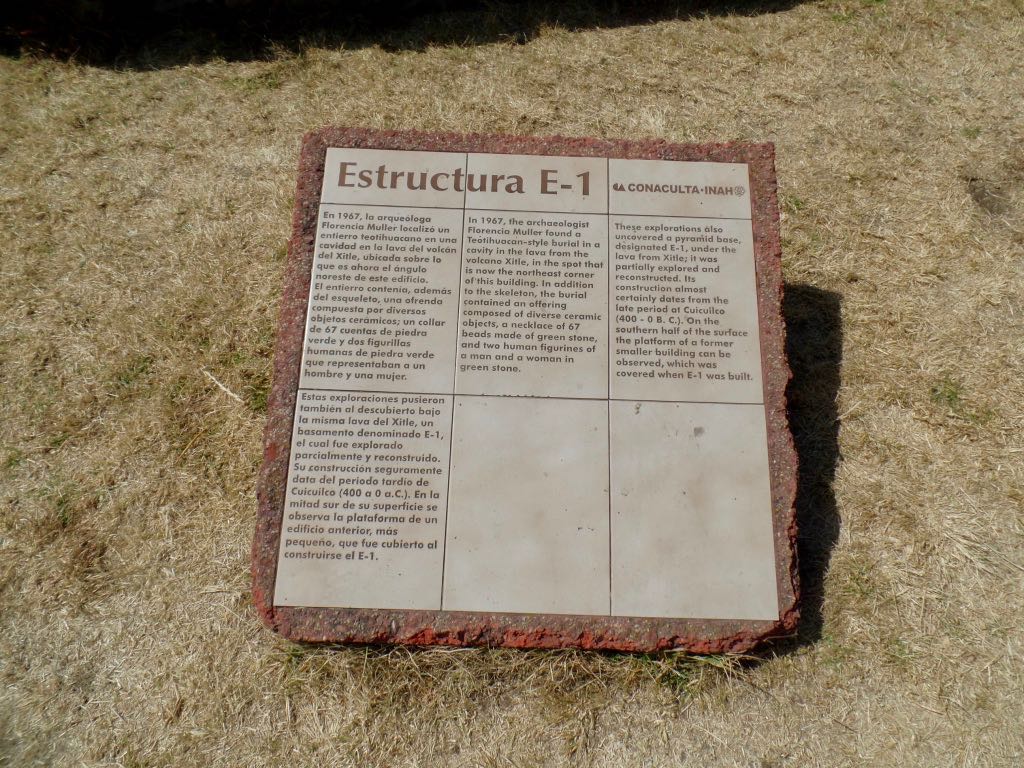 An explanation of the structure, and another chance for me to see what I can do with Museum Spanish. I assume there's some reason that the Spanish panels are one above the other, while the English is one to the right of the other, but I don't know what it is. It might be as simple as the person laying them down set them in the wrong place. (I'd probably have put the English one above the other on the far right, for visual symmetry.) 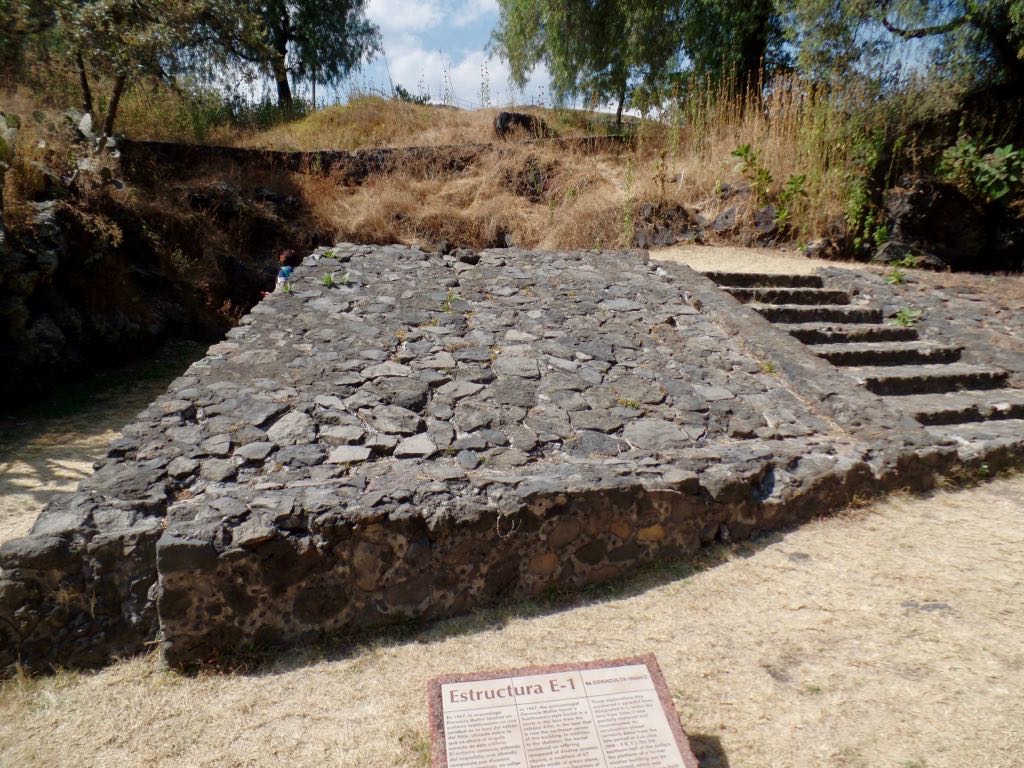 The E-1 Structure is a pyramid, roughly, and the stairs run up about ten feet or so from the ground. You can just make out a person behind it, on the left, for some sense of the scale of the whole thing. It's quite flat on top. 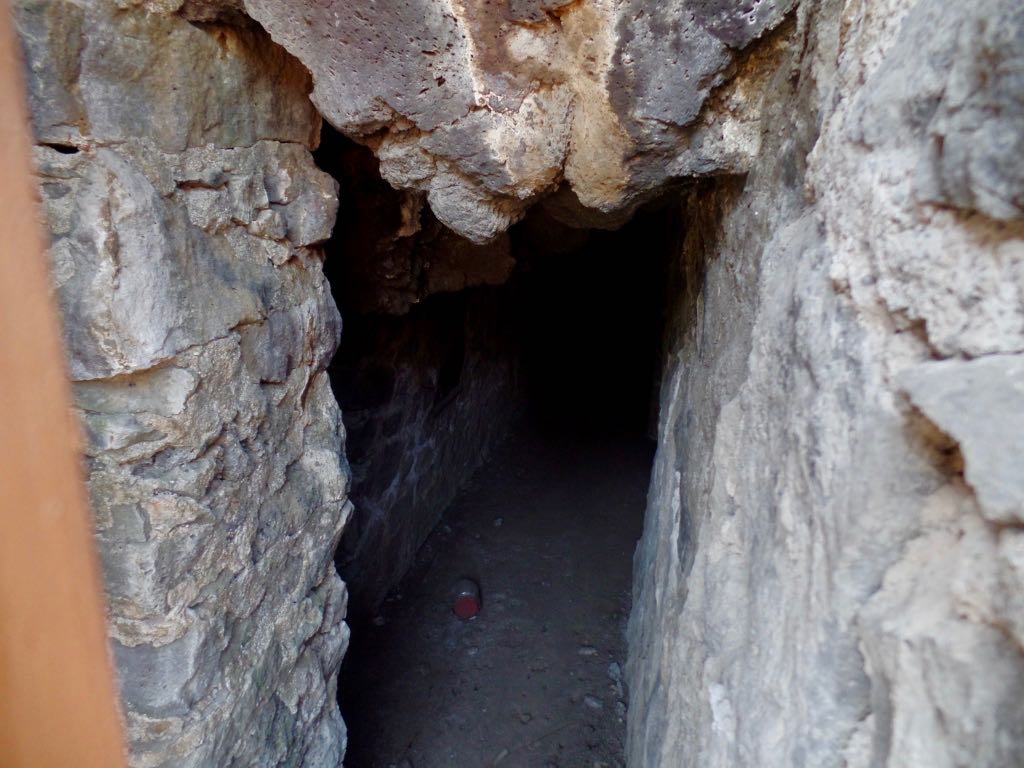 A small subterranean tunnel behind E-1. It's about where the person in the last picture was standing. The air pouring out of it was quite cool; it felt like having an air-conditioner blasting me. 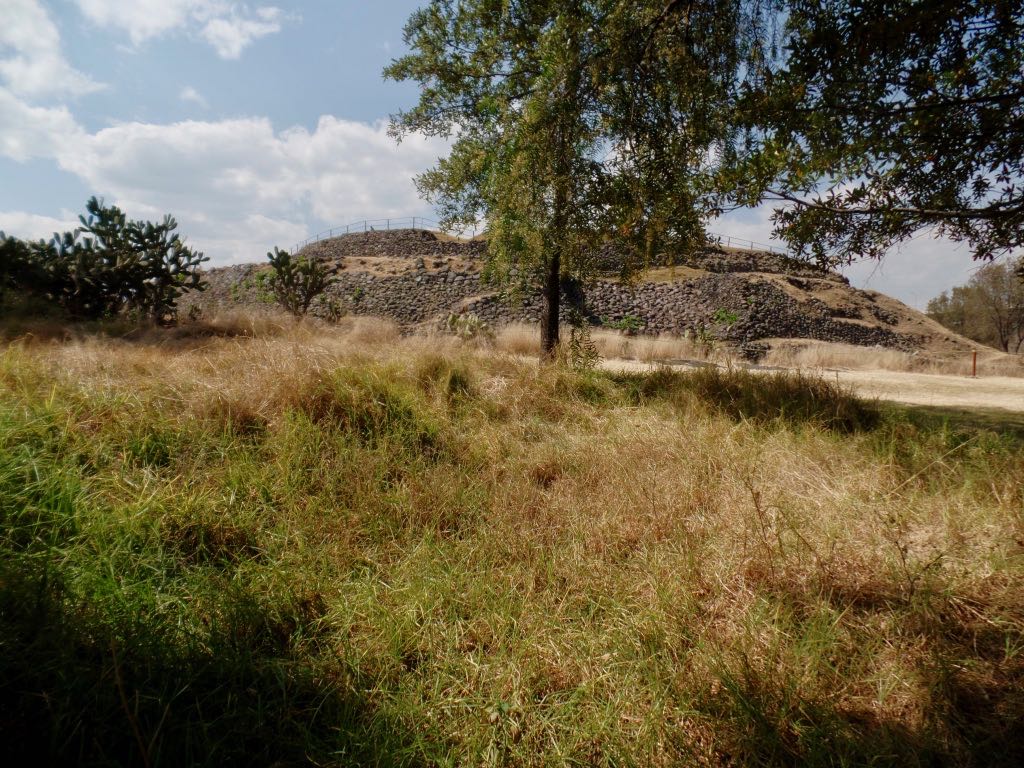 Looking at the main pyramid from ``behind'', relative to where I'd started. I took this photo just up the hill from E-1, and the gentle slope and ramp from my first picture of the pyramid is roughly opposite this angle. 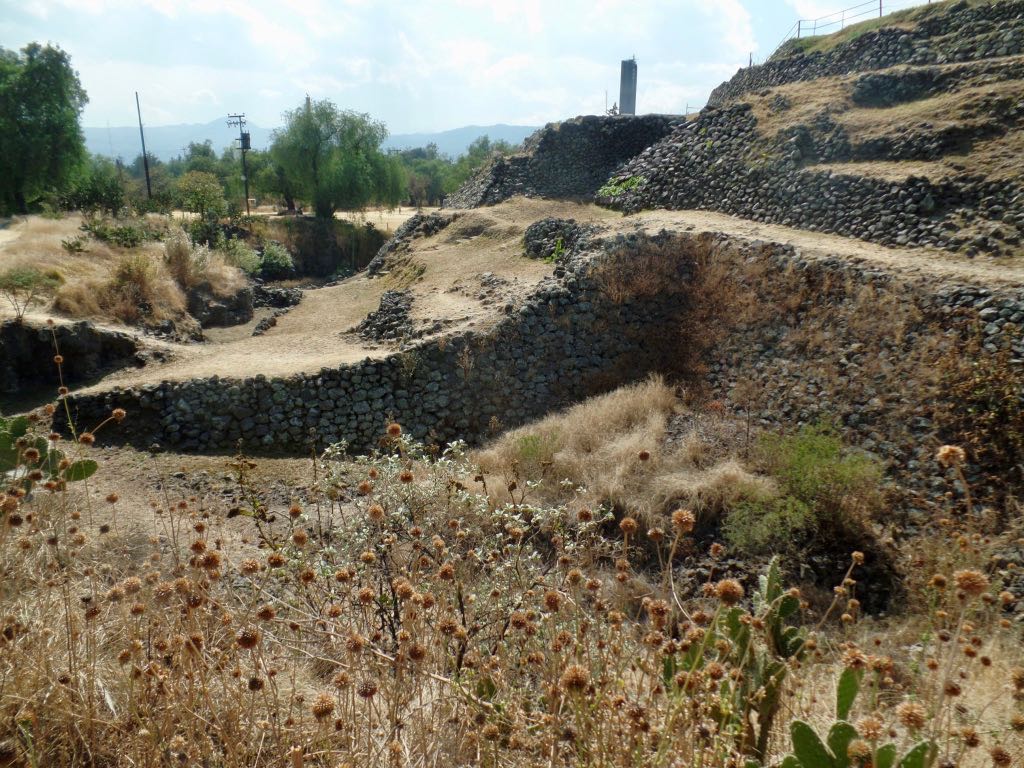 The pyramid has three tiers, and while you can walk along each of them the south side of this lowest tier is a bit rough and un-level. 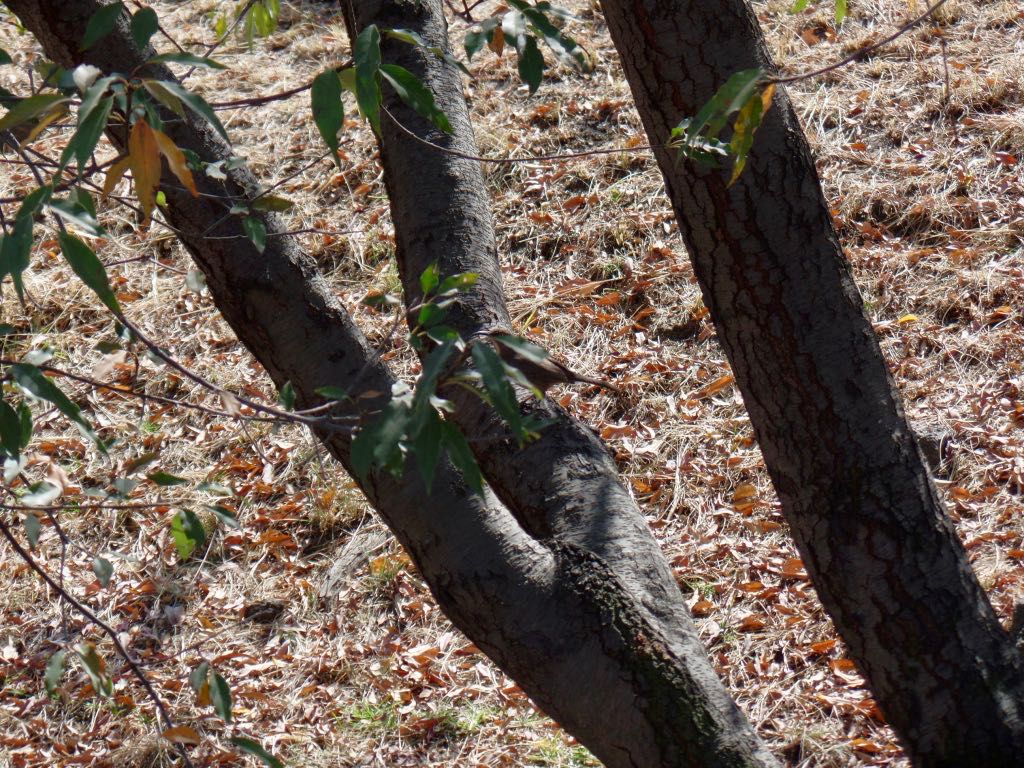 A local bird in one of the trees. I have no idea what kind of bird it is but that's all right. An experienced bird-watcher will not be able to even make it out. 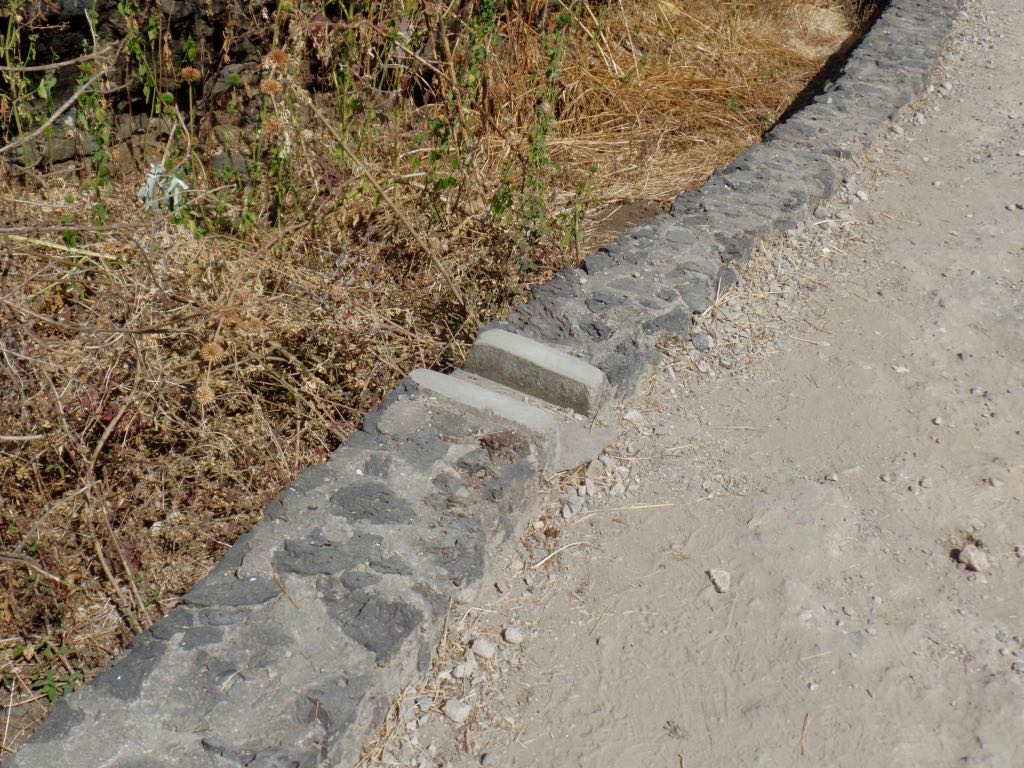 Curious little cut in the walkway's edges. I don't know its purpose. It didn't seem to be angled or placed right to let rainwater drain from the walking path.

Trivia: In Athens of about the fifth century BCE the name of the seventh month of the year was Gamelion. Source: Mapping Time: The Calendar and its History, EG Richards. </p>