Taxi Jam wasn't the only roller coaster in Kidzville. There was also Silver Streak (manufacturer name Suspended Junior Coaster). It's classed as in Inverted coaster, which makes it sound like it goes upside-down. I don't think that it does; it just banks pretty far. I don't remember a point where you go upside-down. ``Inverted'' here means the train hangs below the track, rather than rides on top of it. It's a nice ride, and understandably popular as it offers the kinds of thrills you'd expect on, like, Leviathan without being so intimidating.

After riding this both

bunny_hugger and I started seriously thinking: we've been here five hours. We've got seven to go. We've ridden eight of the sixteen roller coasters we could. We might just ride everything after all. We left it unstated, at that point, as we walked toward Behemoth, the 230-foot-tall hypercoaster at the other side of the front of the park from Leviathan. And then stopped midway through to admire several families of geese, with goslings, at a pond.

Behemoth is a huge roller coaster, although what really attracted us was its entrance sign. It's a string of letters, each tall and skinny, on tall skinny pillars. I suppose it's not actually Art Deco, but it evokes that in a way that was gorgeous to start and that we both knew would be only more beautiful at night. The ride itself is again strikingly like Leviathan or Millennium Force, a lot of great swooping smooth arcs on a track that, mostly, goes out and back again. As a fan of sea monsters I hate to admit this, but I liked it better than I did Leviathan. Curiously, Behemoth --- named for a monster of the land --- runs alongside and partly over a pond. Leviathan --- with a sea serpent as its icon --- runs nowhere near the water. One suspects the naming was done without thinking through the theme that deeply.

bunny_hugger looked seriously at a Behemoth hat, in the gift shop afterwards, and I may have joked about her forming her new Halloween outfit. Didn't buy one, but did start thinking about the Behemoth plushes, one of which she did ultimately get. There were a good number of T-shirts with their Behemoth-Versus-Leviathan rivalry, all tempting stuff. I would not get a t-shirt from Canada's Wonderland.

With this, we'd ridden all our high-priority roller coasters. We still wanted to get to Yukon Striker, the park's brand-new dive coaster, but we expected that to be such a long queue that we would skip that rather than miss, like, a half-dozen other things we could do. So we went looking for smaller roller coasters. Like, we were right beside Backlot Stunt Coaster. This is the twin to a Kings Island ride. And like the one at Kings Island it started as The Italian Job, themed to the I-want-to-say-forgotten-remake. When Cedar Fair bought the parks from Paramount, they rebranded all the rides that had been movies with, apparently, the first thing that anyone said, and they've stuck with it.

Oh, but along the way we walked across a bridge and noticed in the water below a lot of koi, or a similar fish. They were swarming around the bridge, suggesting that they expected food. There wasn't any food-dispenser there, though, nor signs that there had been one recently removed. There must be some other feeding station that the fish have learned from. We never found it.

Also near this bridge, and the entrance to Backlot Stunt Coaster? A family searching for a lost sneaker. Somehow it had gone over the bridge and into the water and they thought they'd found it near the water's edge. The father of the group had jumped over the fence and was walking into the trees lining the water, while arguing with his wife who was telling him he was going the wrong way about whether the right way was passable. We never saw how the shoe search turned out.

Backlot Stunt Coaster's a nice, tiny little ride. It launches with a linear induction motor, a feeling I really enjoy. And it putters around a cramped track full of Movie Los Angeles stuff. There's a point in the ride, here and at Kings Island, where it's supposed to stop and let an attack helicopter shoot up some oil cans. At Kings Island, when we've visited, those props haven't worked and so the train just stops for a moment while we watch nothing. Here, the train didn't stop, which made for a better ride but also left us with the impression that they're really letting the theming fall apart. (The train stopping is, surely, to give the other train in the station time to finish loading, do the safety check, and launch. Our train not stopping probably reflects the roller coaster only running one train so that there's no need for pause.) Also serving this impression: the billboard that the train, in its last leg, leaps through. The billboard's supposed to look like it's been torn open. The one at Canada's Wonderland looks stretched and torn, more than I remember Kings Island's, and worse than you see in the park's official ride video. It's always easy to imagine the non-marquee roller coasters are about to be renovated out of existence. But it's hard not to get the vibes that they're abandoning Backlot Stunt Coaster in place until they're ready to completely re-theme it.

PS: A Neat Fake Particle Physics Simulator, in which I don't actually do anything, but share a thing you might do.

PPS: revealing some of the mysteries of the Cuicuilco Pyramid! 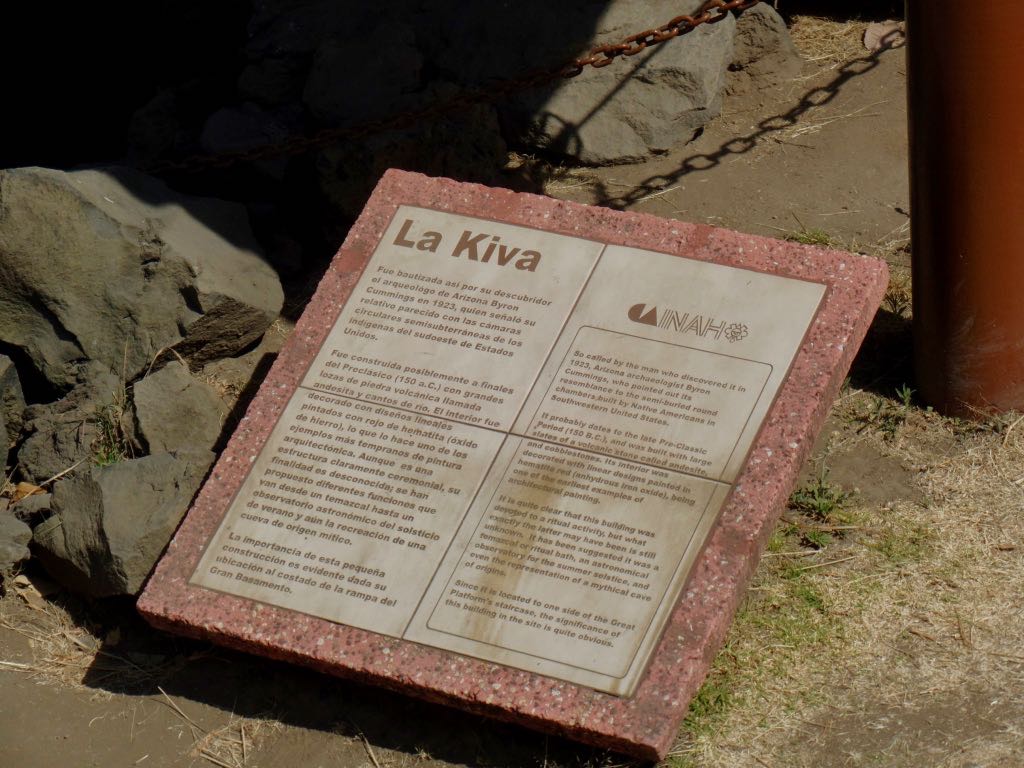 And here's the museum plaque which explains La Kiva, at least etymologically: it was named by a United States archeologist who discovered it and pointed out the resemblance to structures from Southwestern United States-based Native Americans. And it falls just short of saying where ``Kiva'' as a name comes from. (Wiktionary says it traces to the Hopi.) 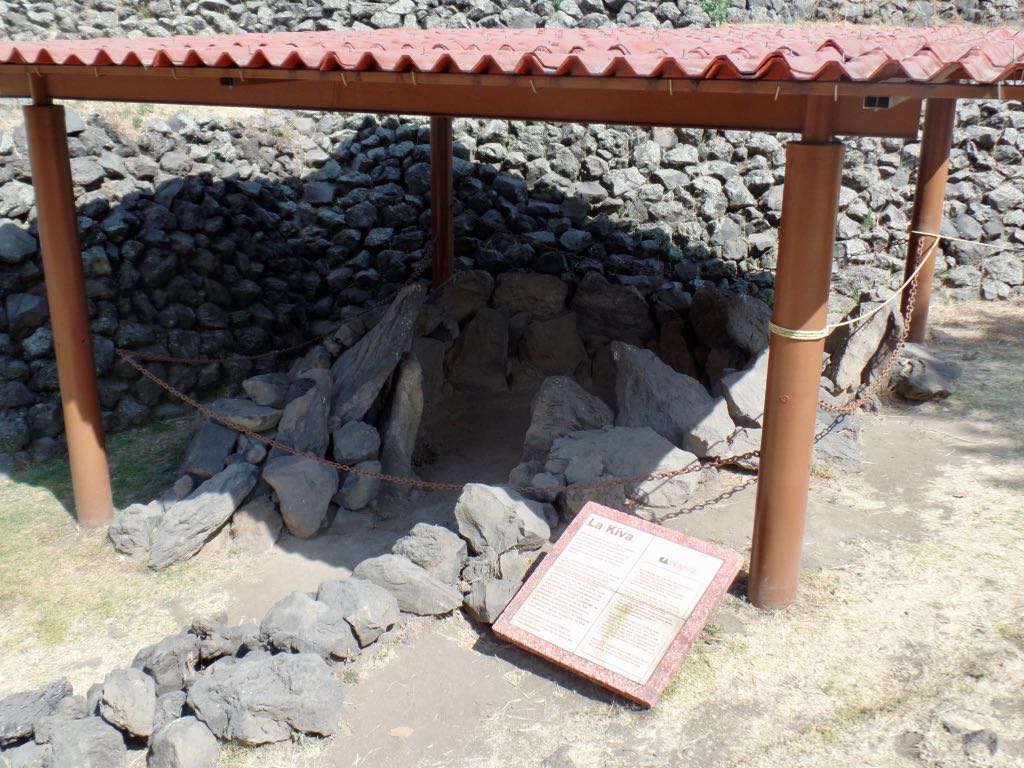 A view of La Kiva, or at least its entrance, and the shelter used to protect it from the sun. And you can actually see things, which is a good change. 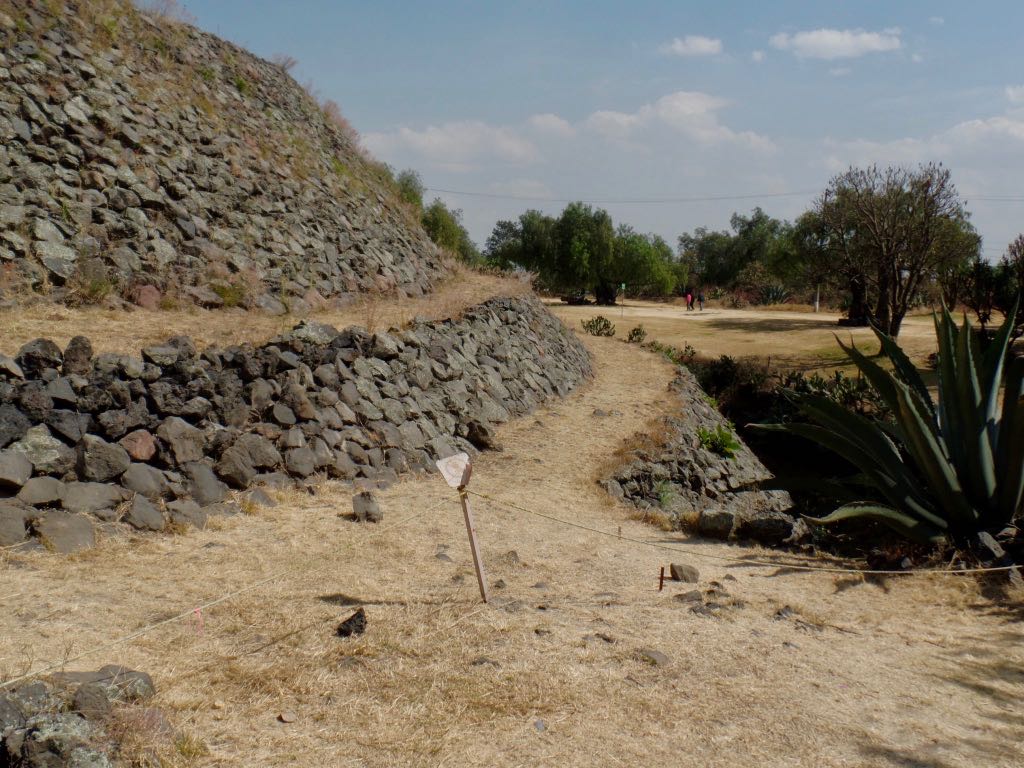 Past La Kiva is this view, showing off the lowest base of the pyramid and the dry moat which surrounds it.