A guy from old New Brunswick

We felt we had time to ride the Antique Carrousel, as Canada's Wonderland spells it. (While I prefer carousel, there's not a unique spelling of the word.) This is in a handsome circular building with, as mentioned, three angels as heralds on the top. Inside turns out to be ... not quite an old friend. The carousel, Philadelphia Toboggan Company carousel #84, built 1928, had previously been at Palisades Park in New Jersey. While Palisades Park closed before I was born, it's quite plausible that my parents, or my grandparents, rode this. And before Palisades Park it had been at Palace Playland in Old Orchard Beach, Maine, so some of

Taft Broadcasting, which built the park, bought the carousel in 1972 when Palisades Park closed. They put it in storage, and left it there nine years, ready for a park to put it in. It seems amazing to think they were buying carousels that far ahead of need, but I suppose Kings Island had worked out quite well so they figured they'd need more. (If all else failed they could have put the carousel in Kings Island or Kings Dominion. At the time, Cedar Point, a similar class of park, had four carousels.)

The carousel's looking good, as you might expect. Delightful to us is that not only do they have the chariot on it, but they also have a yoke to the two horses in front of it, so that the vehicle is sensibly ``pulled'' by something. There's no riding the chariot's horses, and the park prevents that by the elegant solution of having a bit of wrought-iron decoration on the pole that blocks the spot someone would need to sit. And it doesn't look like an obstruction; it looks like decoration. It's an elegant bit of human-interface design. Also they had the little row-and-column number badges on the insides of the horses, a touch of how things are made that we discovered first at our last trip to Kings Island. So we're all happy with this.

And now we could get back to roller coasters, including rides we weren't perfectly positive we wanted to ride. This would be Time Warp, which you could only guess used to be a Tomb Raider-themed ride by looking at it. Well, by looking at the queue or the ride logo or whatnot. The ride itsel is a flying coaster. This sounds like an exciting model. It's ... not. The ride has you stand up in a cage, and rotates the cage around. It does make a pretty good feeling of flying, when your cage is leveled out and you soar in a line. But then all your weight is pressed into your chest. And the ride insists on doing foolish things like making a turn, at a speed where you feel like laundry being tumbled. So it's not that fun a ride. Still, flying coasters like this have become rare --- the only other one I'm sure I've ridden is Super Flight at Rye Playland --- and we didn't want a weird ride to go unloved. Not that it was in danger of this: it had a surprisingly long queue, considering the ride combines ``going upside-down'' with ``being slow and a bit painful'' and doesn't even have a coherent theme. Something about the package appeals to a Canadian audience is all, I guess.

Beside that is Flight Deck, which again we had ridden long before we rode it. It's the same model roller coaster as Thunderhawk at Michigan's Adventure, and Batman The Ride at Six Flags Mexico, and Mind Eraser at Elitch Gardens, and for that matter many more parks. In fact, Six Flags put in at least three of these rides, all named Mind Eraser, at different parks, as if they forgot they'd used that name already. So this was a ride to get on once we felt confident we were going to ride everything we really wanted, although I don't think we had yet expressed that aloud. Still, we'd gotten on more than half the roller coasters and had nearly half the day to go. The mathematics of it were looking good. Flight Deck was, in Paramount days, known as Top Gun. The exact same ride names, and shift in ride names, happened at Kings Island, but their Flight Deck is a completely different kind of ride and has since been renamed The Bat. There's also a The Bat at Canada's Wonderland, but that's a different kind of ride too.

We were getting a bit hungry, and thought of this doughnut stand we'd seen beside the macaroni-and-cheese place. The direct path to that took us through ... a couple of Arabian Nights-styled buildings hosting a photo booth and some kind of show that wasn't running that day. Then past a large globe on a neat pedestal with friezes of the four elements, and a passageway lined with flags of the world. With, in some cases, obsolete flags of the world, such as ones for Siam or Imperial China or one that's definitely an obsolete British Colony flag that I couldn't identify. The area has a plaque identifying The Grande World Exposition of 1890, a thing which did not take place in reality. But it was one of the park's original themed areas, meant to be a World's Fair-themed area. Much of it had been chopped off and re-themed for other attractions, including Action Zone. But it's recently made a comeback, as the park tries to get a bit better balanced again. The Antique Carrousel is considered to be part of the Grande World Exposition area, and fair enough. So is the Swing of the Century giant swing ride. So is the Flight Deck roller coaster, because ? ??? ??? ?? ???? ??? ?. Also Time Warp, because ?? ???? ?? ? ????? ???.

The doughnuts were from a stand called Tiny Tom Donuts, ``Celebrating 25 Years at Canada's Wonderland'', and they invited everyone to watch them being made. They're made by this cute automatic machine that pours out dough, circulates things, and puts them on a conveyor belt to cool enough to be put in a bag along with some cinnamon or confectioner's sugar or whatever. They're tiny, so we didn't feel bad about having a dozen doughnuts each. Really hit the spot, too. Apparently Tiny Tom has locations in town, too, and the bags included coupons for their newest in-town store. On the outside of the Tiny Tom Donuts is a cartoon figure of a slightly pudgy grandpa type saying, ``Hey dude! Watch your donuts being made!'' It seems gleefully silly.

The next-most-interesting coaster of the handful left to us, now, would be the Vortex. This is a suspended coaster, the cars dangling on a long rigid pole underneath the track. (Inverted coasters don't dangle so far below; suspended coasters can swing side to side in greater arcs.) This is a ride very like Iron Dragon, at Cedar Point, and for that matter The Bat at Kings Island. We always like a suspended coaster. This one offered the extra thrill that it goes up and over some parts of Wonder Mountain, the park's central feature. Not over much of it, but still, enough for a dramatic view. And it is a surprisingly intense ride, for a suspended coaster. Iron Dragon and The Bat are good, swoopy, pleasant rides that get a real feeling of flight to them. This one was thrilling in a way we didn't expect. Going over the mountain, and seeing what used to be observation platforms, added to that.

We were having an extremely good day for getting on the roller coasters and other high-priority rides. And we still had several hours to go.

Trivia: In a 1957 interview with the New York Herald Tribune, James Thurber mentioned how the early drafts of The Secret Life Of Walter Mitty included a scene where Mitty beat Ernest Hemmingway in a brawl at the Stork Club. It was removed when Thurber was convinced the story should not have anything so topical. Source: America's Humor: From Poor Richard to Doonesbury, Walter Blair, Hamlin Hill.

Currently Reading: DC Comics Before Superman: Major Malcolm Wheeler-Nicholson's Pulp Comics, Nicky Wheeler-Nicholson. The author's thesis that Superman didn't make so much of a difference in the kinds of comics DC was publishing seems all right. The choice to reprint extensively from some stories of the era is defensible, sure, but dozens of pages of Our Hero and the Yellow Peril Chinese Villain shuffling back and forth not actually accomplishing anything is tiring. But the bizarrest thing is the decision --- more than once --- to not print the end of some of these stories, citing the rarity of the original books. If they mean to say they couldn't find the comic books where these stories ended, all right, but the wording makes it sound like this book didn't want to spoil the advantage collectors who own these 1936 DC comics have in knowing just how the cliffhanger ending of White Guy Versus Chinese Stereotype Man came out. Also, I know I comma splice a lot, so trust me when I say Nicky Wheeler-Nicholson comma splices a lot. 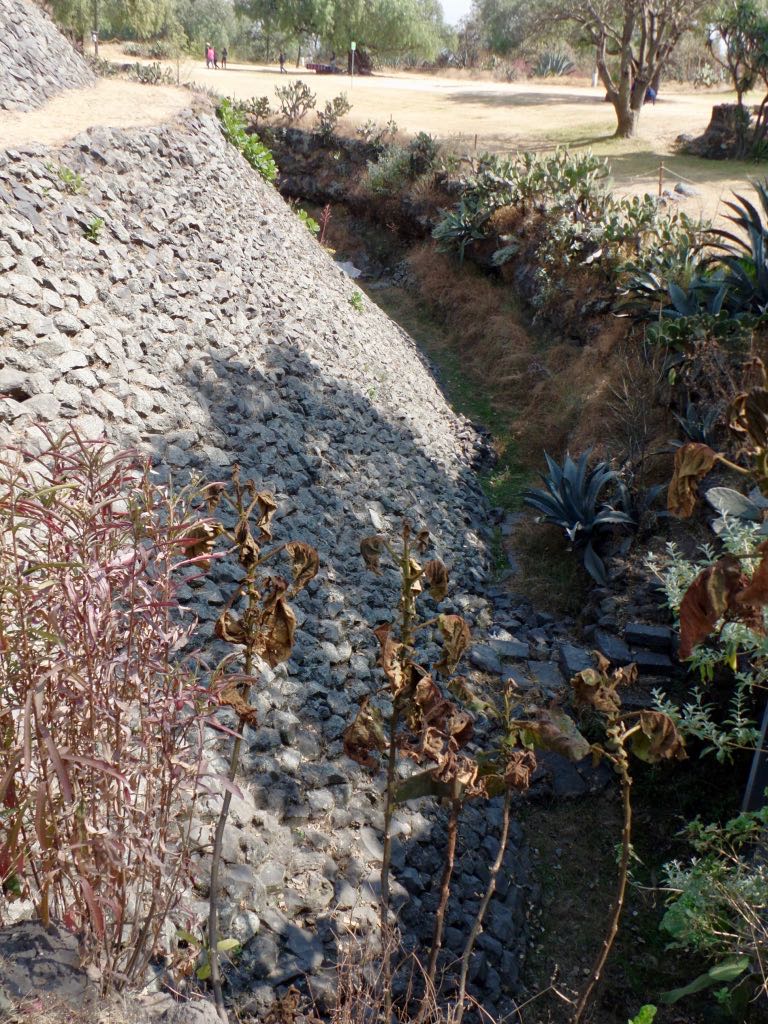 Here's a better view down the dry moat around the Cuicuilco Pyramid's base. 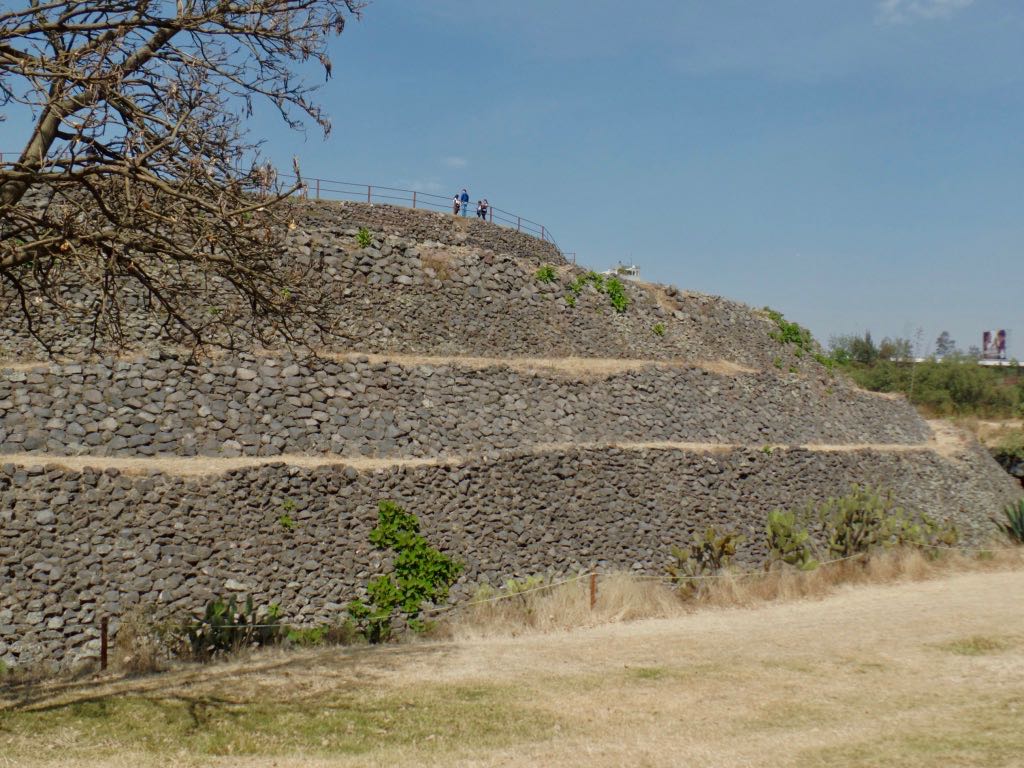 And from the main land another look up at the pyramid, which maybe gives some idea the scale of the thing. 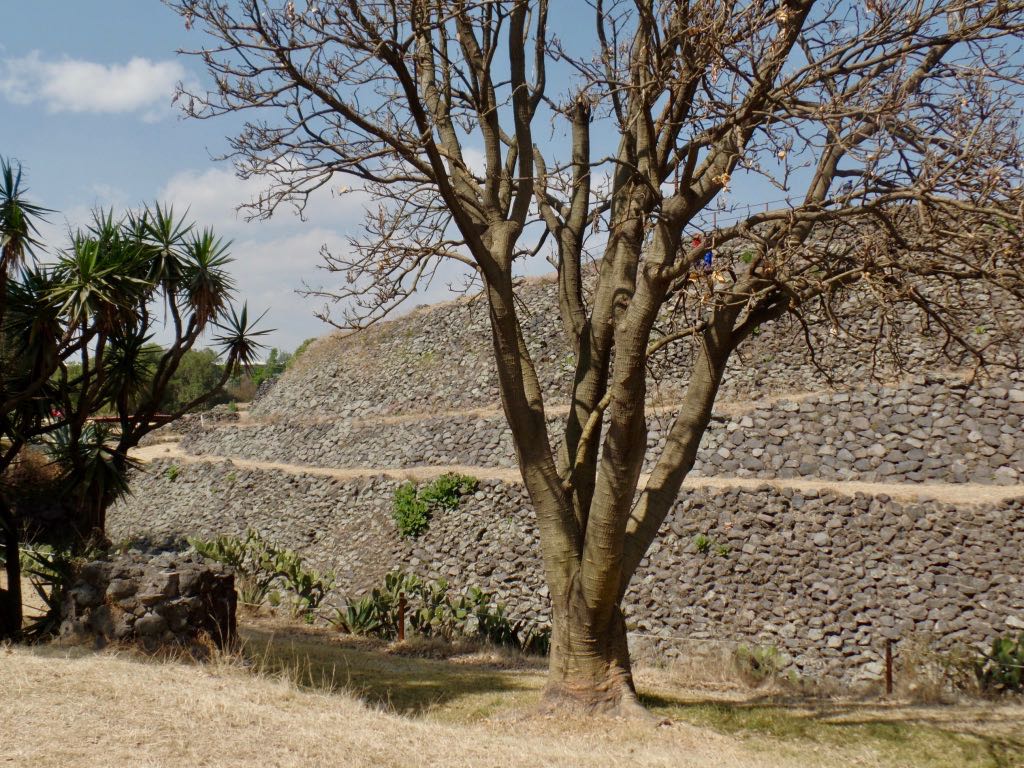 Another view of the whole pyramid's height, in which it's harder to make out the scale but there is a lovely tree posed dramatically in front of thigns.