And now I want to fall into something else

Fantasy Island's front midway has that 70s-style Faintly Americana style architecture, with a nice small stone-lined waterfall and the carousel, a 1950s metal Herschell-Spillman model that was probably part of their standard Kiddieland package. Also the park has a replica Liberty Bell, ``Presented to Fantasy Island in commemoration of America's Bicentennial 1776 - 1976 by bells [sic] Markets''. This according to the sign that represents my favorite kind of sign, the sort that gives a full explanation that doesn't explain a thing. The replica bell doesn't have a clapper and the 'crack' is just an indentation in the moulding, not ... like ... a full crack.

The park spreads out, basically, perpendicular to this entrance, with to the right a Fairy Tale Forest that has a bunch of statues representing figures. Also a Yellow Brick Road, in the pavement, which runs from the main gift shop over to ... the Fountain of Youth. Which is a wishing well. This rekindled my question about why more amusement parks don't draw inspiration from the public-domain aspects of The Wizard of Oz. It also made me realize ... I'm not an Oz expert, but ... was there even a Fountain of Youth in the Oz books? It seems like something L Frank Baum should have played with. Certainly some kind of age-manipulation gimmick, anyway. I'm also not sure there were any gift shops in the Oz canon, although I would generically imagine Baum to have at least one scene in an Oz Department Store, wouldn't you? The rest of the kiddieland sections are off to the right of the park and we'd get to them in time, don't worry.

To the left from the entrance midway is an Old West themed area. That's mostly buildings; I don't think there's any particular rides. But there's an area for show, and we'll get to that in time too. Anyway, past that we get to the Action Zone, I think is the theme. The one with the major reason for us to come here, rather than another park in the area.

This would be Silver Comet. It's a roller coaster, built in 1999. It's a wooden roller coaster, although the infrastructure holding it up is steel rods. In this it's very like the J2 roller coaster at Clementon Park in New Jersey. The station is this gorgeous, old-fashioned-looking thing, with the name spelled out in a column, one letter at a time, with different rainbow colors behind each letter. The style of that, and of the balls-with-motion-streaks behind them, is old-fashioned and gorgeously so. This is because they were going for something. The station was built to evoke the station of the Crystal Beach Comet, one of the centerpiece roller coasters of the nearby (and defunct) Crystal Beach, Ontario, amusement park.

The Crystal Beach Cyclone has some cultural heft. The original roller coaster --- one of a trio of ``Giant Cyclone Safety Coaster'' which opened in the late 20s; its sisters were the (original) Palisades Park Cyclone and the Lightning at Revere Beach, Massachusetts. This line of coaster was notoriously rough. The New Jersey and Massachusetts coasters lasted less than a decade. The Crystal Beach Cyclone kept a nurse's station near the park, a bit of utterly legendary marketing. And the Cyclone ... was rebuilt in 1948, enough that the Roller Coaster Database regards it as a new coaster, the Comet. That one's been moved to Great Escape, a Six Flags-owned park in upstate New York. The eastern side of upstate New York, so it was outside the scope of our visit.

Still, this gives an idea of the presence that the Crystal Beach Cyclone/Comet had. And why it would be the thing they wanted the park to evoke. The Fantasy Island Comet is a 1990s Custom Coaster International build, a triple-out-and-back ride meaning that it goes on an approximately linear path ... you know where this is going. But it's got a lot of nice touches to it, including the coaster turning around on a segment of track with a dip in it. In some ways it's kind of a half-size Mean Streak, certainly a good thing to evoke for folks like us. We took our first ride just rushing up to the platform and taking whatever seat we could get, mostly out of fear that the rains might return, or get bad enough the park had to close. If time allowed we'd come back to try to aim for a front seat ride. As it was, we got a back-seat ride. The park was empty enough there wasn't much of a wait.

We could easily have gone back to this ride, but there were other roller coasters at the park, and we figured to ride while the weather was good. The other significant roller coaster is the Crazy Mouse, a spinning wild mouse that's at the far western end of the park. It's a twin of the Crazy Mouse at DelGrosso's Amusement Park in Tipton, Pennsylvania, although the Roller Coaster Database lists them as different models, I think because the company that made DelGrosso's was bought out and some of the control systems changed. Also the twin of The Exterminator at Kennywood, and --- for a ride we haven't been on at a park we want to get to --- Margate Dreamland's new Pinball X. The ride's so far at the end of the park that the signage gets a bit vague. We weren't positive when we approached what ramp was the entrance and what the exit. It was a slow enough day they didn't much care.

The ride has a sign warning that the ride needs at least two adults and two children to ride, but that on an ideal day, warm and without wind, they can operate with the minimum of two people. It was a cool-to-cold day, with wind and scattered rain. They were sending out groups with just two people. One hesitates to be skeptical, but I am forced to wonder. Could the sign simply be a bluff, so that on days when the queue is long, they can force pairs of people to accept that other people will ride in the car with them? ... But then why have the warning that it's only cool and windy days when they need to fully load the cars? It's a bit mysterious.

This, maybe a half-hour in since we got to the park, got us rides on all the non-kiddie coasters. So you see why this was a good park for us on a day that might be cut off for rain at any time. But the rain was holding off, at least a bit, and we could explore and do more with the park. We went back to the Comet for another ride, this time getting in front. I enjoyed the front seat more, but I can't say the backseat is a worse ride here. And we noticed that the park had another Ride Manufacturer Information Plate, with a different format than the ones at every ride at Canada's Wonderland. This was more like the information plate at Shivering Timbers, at Michigan's Adventure, from the same manufacturers but installed in 1998. They just liked talking up their technical specifications back then.

And now we had the time to start appreciating the park as a whole. We did look over the games areas, which were lovely to look at but none of which had pinball. They did have some video games, all set just a little too far from each other in too big a space. And several proper midway games, which we'll get back to.

One of the islands in the park's lagoon has statues of, well, Indians gathered around their teepee. This is at the edge of the Old West themed area which I suppose explains why it's there. It's been around long enough to be a signature feature of the park, I guess, and shows up on maps and the like. We stopped along the bridge to look over the water and at the eager catfish gathered underneath.

bunny_hugger had overheard a kid talking about how ``they have antennas'' and couldn't understand what that was about. When we saw, we understood. There was a little feeder station, with a dispenser for Cheerios, and we gave the fish some of that to enjoy.

Now it was getting near time for a show.

Trivia: The Chesapeake Bay is an impact crater of about 90 kilometers in diameter. Source: Oxygen: The Molecule that Made the World, Nick Lane.

PS: Here's more pictures of me getting around that pyramid in Mexico City a year and a half ago. 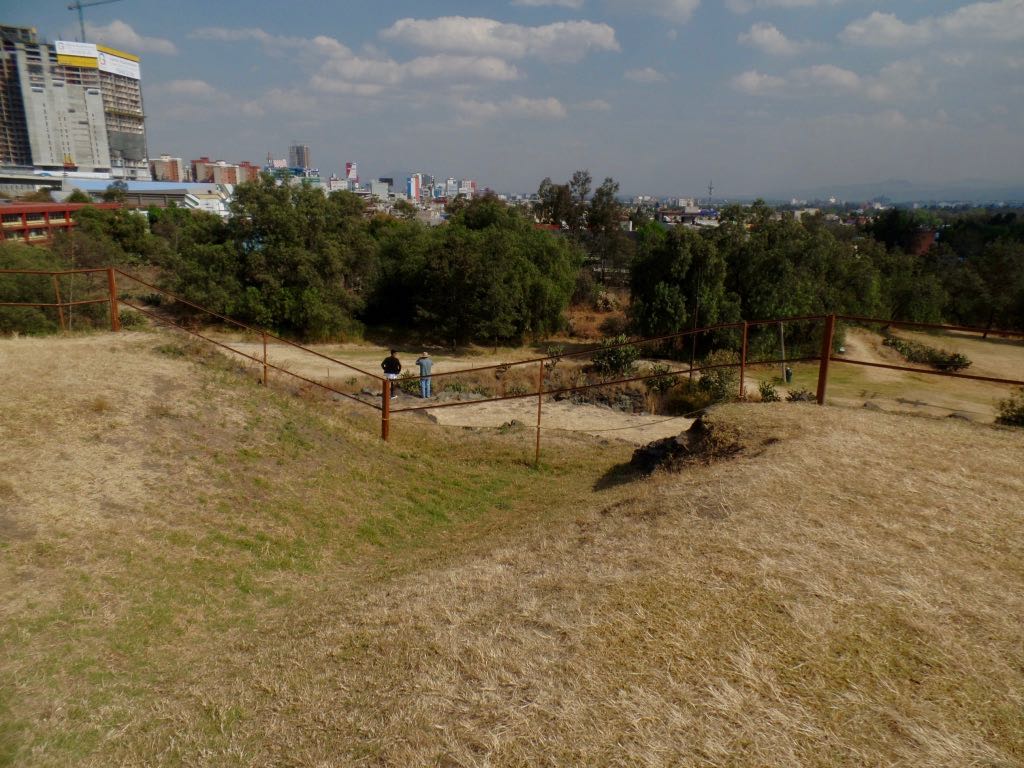 A look down the south-face slope from the top of the Cuicuilco Pyramid. This part at least isn't safe to pass, apparently. 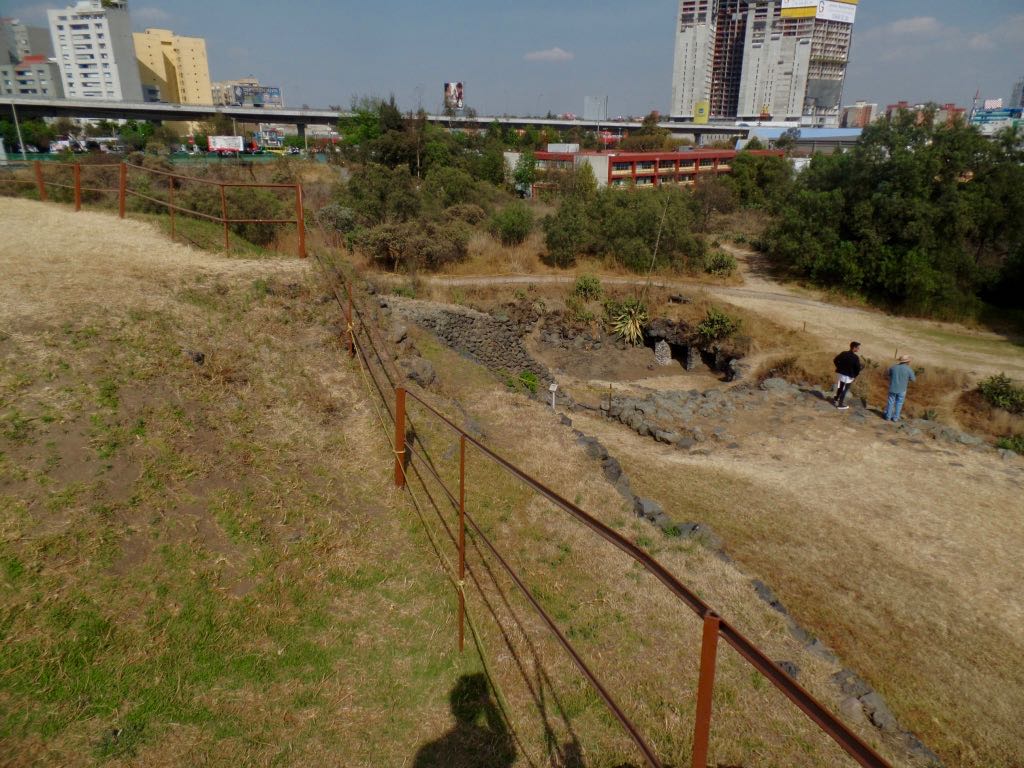 Looking to the east from the south end of that pyramid's tier. You can again see the warehouse structures leading to the tunnel beside Structure E-1 in the center right there. 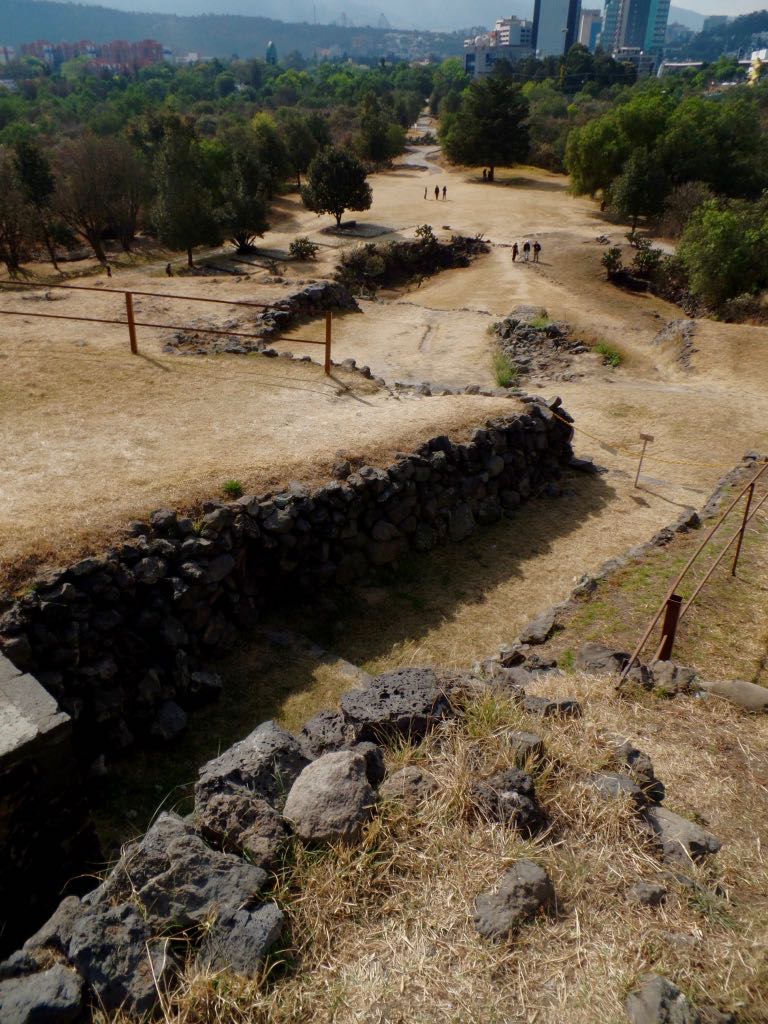 Looking back north again, near the channel cut at the top of the pyramid, and looking over the ramp back down to the ground level and, past that, the road leading to the park entrance.