Now, dressed a bit more warmly, we went back into the park. We toured the kiddieland rides, not being ridden, and the sculptures. One I noticed had an airbrushed-art panel of a wolf with a tiara holding a magic wand of some kind. I recognized it from art at Bowcraft.

bunny_hugger tells me this isn't a character from Something, the hot new content experience, but is probably just some general amusement-park-character-package available ... somewhere. All right. Fantasy Island has a miniature railroad, according to Wikipedia one of the park's original rides. It wasn't running, though. It did go around a Gulliver's Travels statue installation that looked like a Jack and the Beanstalk figure was laid down. The Lilliputians tying Gulliver down are garden gnomes.

We took at last our ride on the carousel. It's also (if Wikipedia is correct) one of the park's original rides, a metal-base, fiberglass-horse Herschell-Spillman of the kid they made a lot in the 50s. There's its twins at many parks and carnivals, including Storybook Land in New Jersey and, travelling, with the carnival that's probably in Fremont, Michigan, next weekend. I think the ride was less rough than (say) the one for Fremont was, although the ride also wasn't as fast.

There was a show starting now, at the theater in the kiddie area. We missed the name. The sign claimed it was titled If The Shoe Fits, which is a good name for a fifteen-minute comic performance for a kiddieland theater. Not this one, though. The plot of this was a goofy Prince (played by the sheriff) and his Trainer/caretaker (played by the deputy) being challenged to a duel for the kingdom by a wandering Pirate and his Dopey Assistant (two of the bank robbers). It was a nice, fun performance. It didn't feel nearly as improvised as the wild west shootout. There were a couple moments where the performers threatened to break into song --- the stereo started playing Generic Musical Opening Chords and a bubble machine came into action --- and the performers cut that off, saying they weren't doing that, or they couldn't afford it. It's cute but it didn't get much of a laugh from the kids in the audience, possibly because they haven't yet watched enough Animated Musical Theme Product to appreciate breaking the narrative. (On the other hand at that age I would swear my favorite thing to watch was The Muppet Show, in which all the best sketches are about breaking the narrative.)

But I think I'm on sounder footing saying the audience was a bit confused. At one point the Pirate and Dopey Assistant had a silly little exchange, that none of the actual kids responded to.

bunny_hugger laughed, though, that delightful thing when she's caught by surprise by the subject. (I smiled, myself.) One of the kids sitting turned to look at

bunny_hugger, then laughed herself. Possibly she was laughing at my dear bride's laughter. I think the kid just now understood that this was something it was correct to laugh at.

More drizzling rain. We got coffee from the coffee-and-candy shop off the main entrance. The coffee came from those thermos jugs you press the lever on top to make dispense, which wouldn't give

bunny_hugger anything. Turned out it wasn't out of coffee, the obvious problem. Some part of the internal mechanism, that siphons coffee out and through the faucet, hadn't been put in and nobody suspected until she said anything.

And we looked at something interesting we'd spotted at the north end of the kiddieland area. This was a ride called Goosey Goosey Gander. It was clearly old. It's a flat ride, cars going in a circular path, except that the cars are geese or ducks, painted brightly and wearing hats and jackets and boots. We'd never seen one like this before. No kids were riding it, so we couldn't confirm

bunny_hugger's guess that the legs would trot along while the ride moved. Neat discovery, though. We explained to the bored, possibly indistinctly suspicious ride operator that our amusement-park-history interests made this worth photographing. She seemed to accept that claim.

We walked through the light rain back to the west end of the park, peeking at the performance area where later in the season singers might perform. And then looked at the Crazy Mouse, while a couple of people in park management raincoats also stared at it. Also about this time I noticed a wild cottontail rabbit, prowling around the end of an empty picnic pavilion, eating damp grass. He gave us a little time to watch and admire before hopping off, running way back to the pavilion area's buildings.

We went for another ride on the Crazy Mouse, since the inspectors didn't seem to do anything particular about the ride's state. This was when we discovered there were not just designated smoking areas but also designated vaping areas, and that they weren't near one another, as if for fear the smokers and the vapers would fight each other. And we took a ride on the Crankshaft Cruisers, their antique-car ride. The track's nice enough; it doesn't have enough scenery, though, and it's got only one or two billboards. Nice old Mobilgas logos for the fuel station, though. (Mobil was the form Standard Oil took in New York, back when we pretended to care about breaking up monopolies.) Somewhere along the track we saw a small pile of popcorn.

bunny_hugger judged the scene, ``Aw, someone spilled their popcorn''. I, with more experience in having siblings said, ``Aw, someone punched her brother'', which is at least as defensible an interpretation.

One of the group prize games we'd seen was called I Got It. We saw right away that it was something like Fascination. Players try to bounce rubber balls into a five-by-five grid of holes, to get a row, column, or diagonal. It's purely mechanical, with the only operator tool being a lever that slides open a grate and lets balls drop out for recollection. The game operator calls out ``now toss ball one, now toss ball two'', and so on, a set of turns until someone calls out ``I got it!'' It looked fun. When we first stopped in there weren't enough people to play a match. Now, later in the day, we were lucky: there was a family there, and we were able to buy in to the several rounds they were playing. The advantage of a group like that is, well, it's more fun. More tense. The disadvantage is your chance of winning drops. The game offers lots of chances for things to go wrong, or weird, though. Like, there was a small hole in the walls of my target, which I figured was unimportant because what were the chance a ball would move in exactly the right way to slip through that? So you know what happened. There's also other weirness: a ball can come to rest on top of another ball, for example, which fate kept happening to

bunny_hugger. Some of the kids in the family bounced balls hard enough they bounced out of play altogether, and at least one bounced into someone else's play. I guess that counts for getting a bingo line? Hard to say.

It took maybe a half-dozen rounds, but

bunny_hugger finally won, getting one of their little laminated I Got It! coupons good for some number of tickets. And the family dispersed, after playing they thought enough of the game and wanting to redeem some prizes for themselves. A single I Got It win, for the number of people we had playing, would allow

bunny_hugger to get ... nothing much, really. Maybe some Tootsie Rolls. After thinking it over we just left, taking the I Got It! coupon as the souvenir. But if we ever go back to Fantasy Island, we'll certainly bring it and maybe combine our winnings, if we have any.

It was time to ride Silver Comet again. This time on walking in I noticed a sweater hung over the fence near the entrance. It was wet, as anything left in the light drizzle would be. I can't swear that it wasn't there before, when we first rode, but I noticed it now. This kind of thing always leaves us with a tough choice: take it to lost-and-found, or trust that whoever left it would retrace their steps and find this? We ultimately left it, but that never feels like the right choice either.

On this ride a kid noticed us wearing our rain jacket and poncho and asked why we were doing that. I asked if he'd ever ridden a roller coaster in the rain. Bested by my logic, the kid turned to confabulation: oh, sure he had. In fact one time he rode and there was this awesome storm and lightning was striking all around. That sounds like an amazing ride, we said, with our own roller-coaster-in-the-rain stories bested. The kid agreed and trotted off to the exit, happy. (

bunny_hugger has the better roller-coaster-in-the-rain story, of a ride on JackRabbit at Kennywood dispatched just before the rain made that a foolish and painful and wild thing to do; our joint rain stories are things like Cedar Point's Roller Coaster Appreciation Night and of getting our skin blasted clean by rain intercepted at fifty miles per hour.)

It was drizzling lightly enough not to make the ride miserable. Fun roller coaster.

Trivia: At its October 1848 opening the Frankfurt Parliament agreed the constitution should include freedom of speech, press, and religion; trial by jury, abolition of manorial rights and other privileges; and equality under the law. Not agreed to: whether Austria should be part of a German state. Source: 1848: The Revolutionary Tide in Europe, Peter N Stearns.

PS: You know what? More pictures from my Saturday in Mexico City, that's what.

And now what you really wanted to see: me attempting panoramic shots! Here's the view from atop the Cuicuilco pyramid looking north and east.

And the panoramic view looking to the south and west, including of the altar. 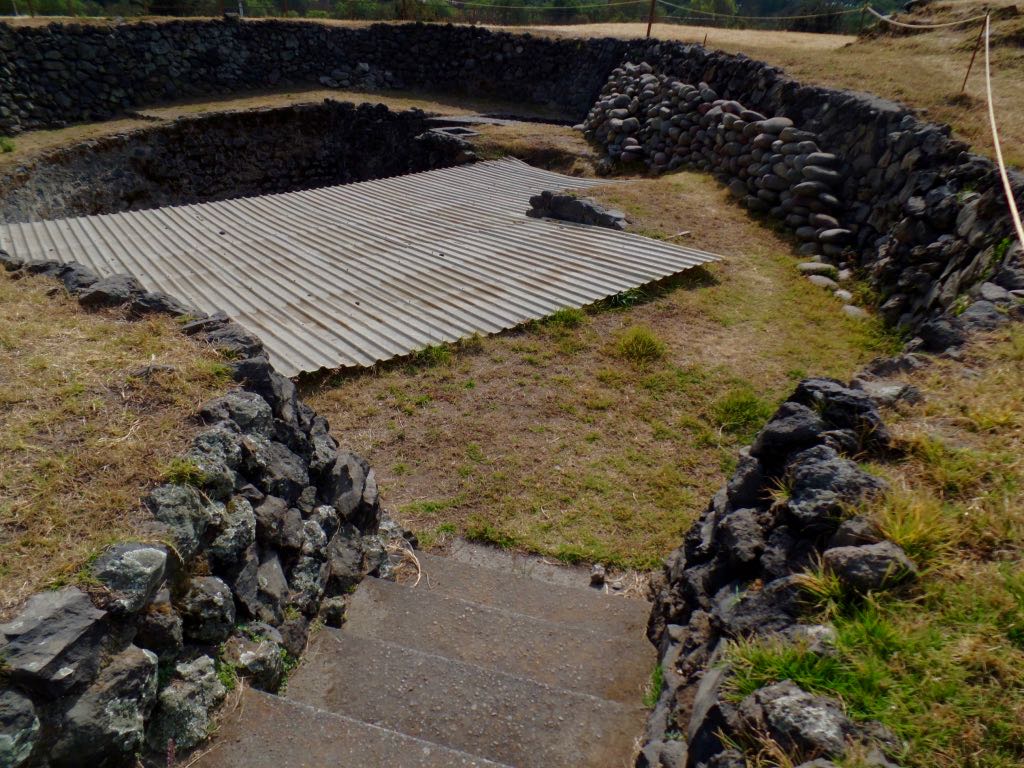 Staring directly down into the altar area and the cover which shelters that.