We were getting near 6 pm, around the last hour of the park, and getting a bit hungry. So what would be a good snack? We were right by a funnel cake stand. Sounds good. They asked if we wanted the regular or the deluxe funnel cake. I decided, sure, why not?

So this would be the single dumbest thing I said over this trip.

Not that this was stupid in principle. But in practice ... well, they made a funnel cake. And then ... nothing happened. I waited. They waited.

bunny_hugger waited. People came in to the funnel cake stand. People left. Other customers came up, ordered ice cream, got it, and left. There was a ... something ... holding things up and while they apologized I also never got clear what the problem was. We heard in the distance the Wild West gunshow going on, the 6 pm repeat that would've been instructive to see. Finally I said to the guy working the counter, look, it's okay if I just get the plain. And he asked if I was sure, and I was, and he gave it to me. He didn't refund the dollar difference between the regular and the deluxe, nor offer to. I decided I did not have enough time in my life to raise the issue.

While we sat and ate and thought about the bizarreness of all this we noticed the midway games starting to close up. It was a heck of a thought that the park was so empty even leaving open booths where someone just has to supervise while people come up and give them money wasn't worth it. When we were finished with the funnel cake we started walking back to the wild mouse. And there we got stopped: park employees warned us, they were closing the park down, starting with the far western end and moving east. It was not quite an hour to the park's closing anyway, but they were saving that hour of staffing.

Oh, something I failed to slot into the time when it did happen. We were looking at the map at one point and an employee came over to ask what help we needed. And we didn't really, we were just getting a sense of the layout. But he knew we were amusement park fans, mentioning

bunny_hugger's Indiana Beach t-shirt. At that moment I didn't know that Indiana Beach and Fantasy Island had the same owner; I just thought, wow, he's aware of this small and quirky amusement park several states over. That's great. (I was also wearing a park t-shirt, but for some other small park that I couldn't blame him for not recognizing.) Great moment, though, nevertheless.

So with the Crazy Mouse closed off instead we went to one of the rides which hadn't gotten the news, the Silver Comet. The sweater was still hanging on the fence and we decided that we should let that rest there. Either the person it belonged to, or park lost and found, would recover it soon enough. There was a short queue and that gave me time to notice another rabbit hopping around the supports for the roller coaster. It was too far, and moved too soon into the tall grass, for me to photograph or to point out to

bunny_hugger. Another good ride, though. And ... we noticed coming off that the ride queue had not yet closed. We could dash around and get one last ride in. And that's what we did, securing a front-seat ride for the next-to-last ride of the day.

But this did impose a tradeoff. As

bunny_hugger silently feared, the gift shops closed before the few straggler patrons left the park. Possibly they closed as early as the midway games did. Possibly if we had dashed for the gift shop rather than a second final Silver Comet ride we'd have been able to get something. An ornament, perhaps. A t-shirt, likely. They had some nice designs, and for some reason amusement parks won't sell merchandise online.

bunny_hugger would curse herself for not buying something when we went out to the car mid-day. It would have been the logical time to buy something and we really ought to have. She was worried we'd end up with no good souvenirs of the whole trip. I couldn't argue that this was impossible; our next park was going to, similarly, be a small independent park and who knows what they might have.

And now there was more rain. And cold. We drove, going off to a Red Roof Inn in Batavia, New York.

bunny_hugger had picked it out as being near enough to all the amusement parks we'd want to go to --- including Fantasy Island --- even though it wasn't beside any of them. It was a weird model, clearly something that was rebranded as a Red Roof Inn rather than built as one. And the rooms were subtly old-fashioned, like, the door handles were knobs rather than the much more accessible bent-lever handles of today. The sink was inside the bathroom, rather than outside, the way the current Red Roof Inn fashion has ... at least on our side of the hotel. During our stay I'd see the doors to other rooms open, for housekeeping, and see that some of them had the sink outside the bathroom. Something strange is going on there.

Also it was noisy. We heard a lot of whatever was going on in rooms on both sides of our floor.

bunny_hugger was sure she couldn't sleep in such a noisy room. So, I went to the front desk to ask. They said there weren't any available rooms, other than smokers' rooms, if we wanted those. We didn't want a quieter room that badly. Also: there are still smoking rooms in New York state hotels? Wow. Possibly the clerk was brushing us off.

Where to eat? In or near Batavia, a town that is not one of your big cities like Cooperstown? ... There wasn't much that seemed interesting. One prospect came to us through a several-years-old report on a pinball maps web site, a pizza place which allegedly had a Gottleib Tee'd Off. It's an early-90s comic golf game, one of a couple of ``oh yeah, we don't have to license comedy golf from Caddyshack'' games made in the 90s. We don't have particular affection for the game, but it is rare to see (even rarer than Williams's No Good Gofers, their entry in this genre). And it was on location, and we like supporting places that have pinball on location.

Great, but ... what location? The restaurant's name was not in my satellite navigator, which got new maps just a month or two before. Neither was the street address. We drove along the part of the town that seemed like the address should have been in, and never saw it. We drove into the next town, supposing that there might have been some confusion between, like, the Town of Batavia versus the Township of Batavia. I don't know that there was any, but this sort of thing happens in Michigan and especially New Jersey all the time.

So with that failed we went to a family restaurant that had going for it that we could say with certainty it existed. And this was a pretty solid choice. They had several good vegetarian options, very cheese-based ones, including a plate of macaroni and cheese which was enormous enough

bunny_hugger was not able to finish it unaided. (I have been unable to finish a restaurant meal maybe twice in my life.) Also a four(?)-cheese grilled cheese sandwich which was not as fantastic as its equivalent in Rennes, France, but which was a great thing to discover in Batavia, New York.

When we got back to our hotel room the place was basically quiet enough, apart from some dogs barking in the early morning hours. Nothing bad enough that moving would have really helped.

Trivia: In 1953 Pandit Nehru estimated that India had over thirty different calendar schemes simultaneously in use. Source: Ideas: A History from Fire to Freud, Peter Watson.

PS: Of course I'm not just done with the day, technically. 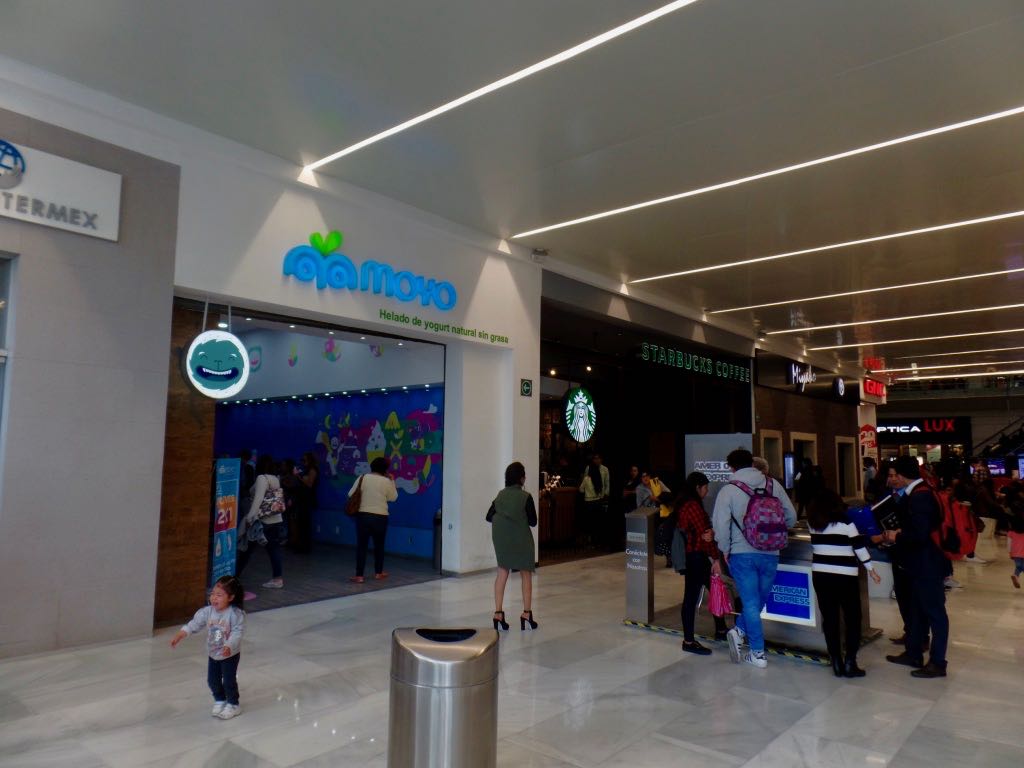 On the way back to the hotel from the Pyramid Cuicuilco there was a good-sized, fairly upscale shopping mall. I thought that would be a good spot to get something to drink and someplace air conditioned to rest, especially as I faced a long walk uphill. So here's some of what an upscale Mexico City shopping mall had to offer: frozen yoghurt and Starbucks. 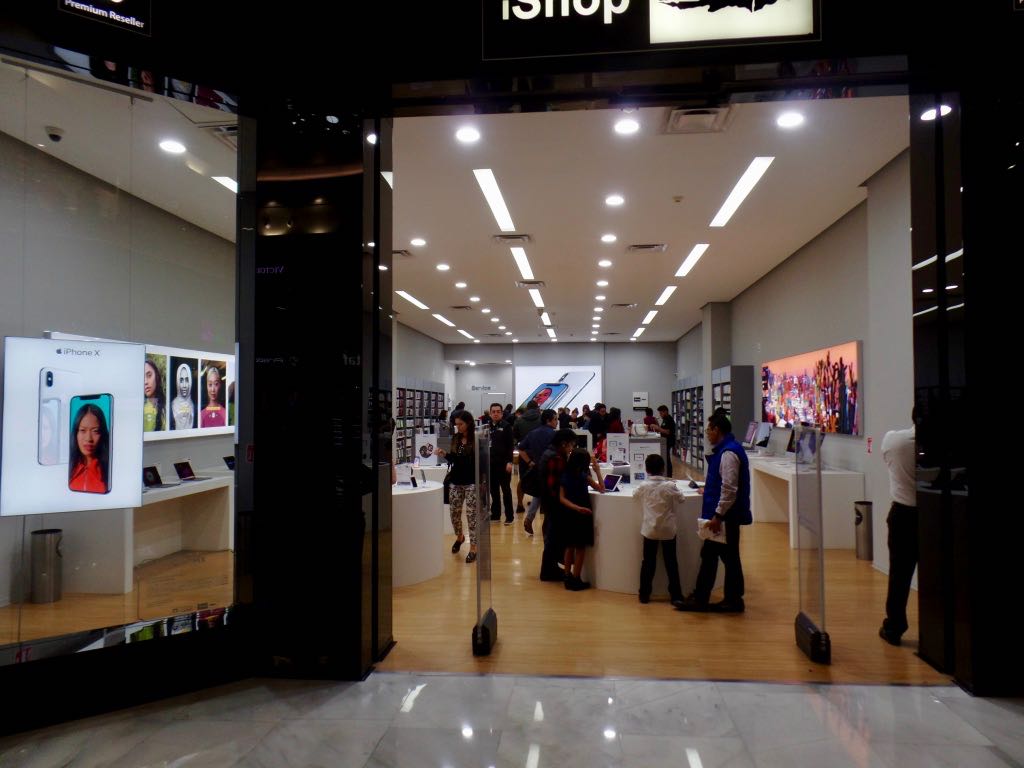 Also the local Apple store licensee, the iShop. Yes, I stopped in and doodled some quick casual nothing on the iPad and the picture came out with a fresh liveliness I can never do when I'm trying to draw on purpose. 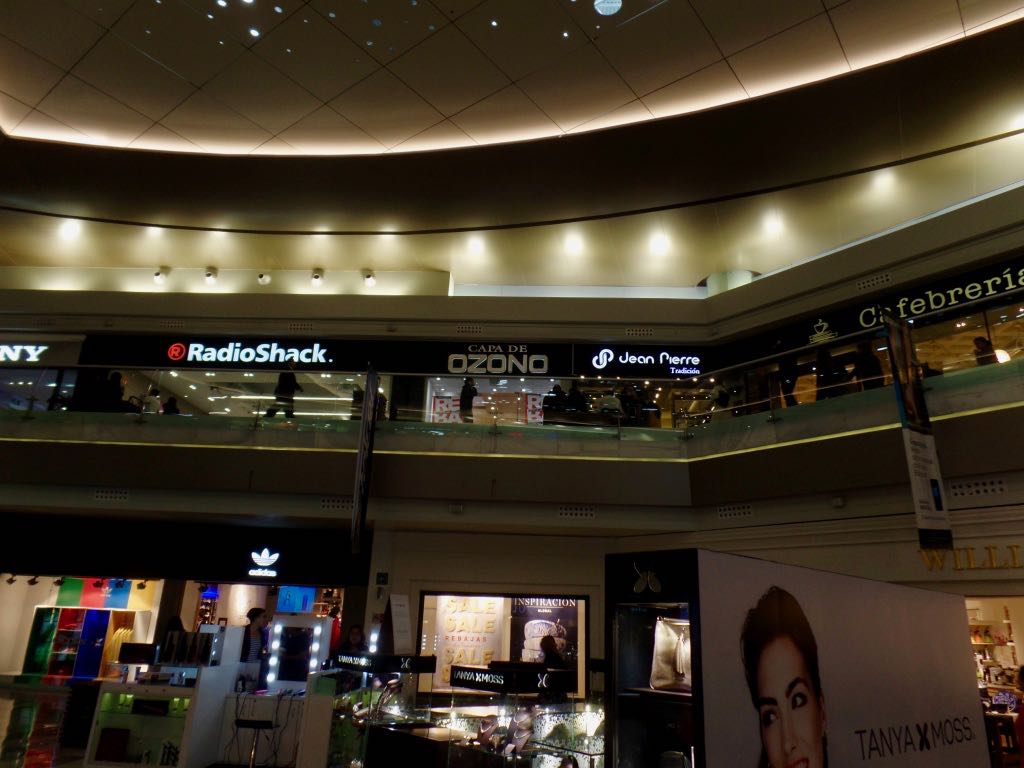 I mean, this place was fancy enough it still supported a RadioShack, see? ... Also, the Cafebrería in the upper right corner was the dedicated bookstore, in a tiny space yet still able to support a small, overcrowded cafe.