What a funny feeling in my eyes and ears and throat

Sunshine has been sneezing.

I don't disrupt the ruthless chronology of my life lightly. But I've just finished the Saturday of our Niagara Full trip, so this is a minimally disruptive time to say what's happening, like, this week.

So our pet rabbit has been sneezing. Like, a lot. A sequence of two dozen short little sneezes, often with her sitting up and trying to brush her nose. We can't deny the adorability of a rabbit trying to groom her face in-between sneezes that will not stop. If she looks cross at her body betraying her it only makes things more wonderful. Still, this is more sneezing than a rabbit should do. So we took her to the vet's.

And there, the diagnosis is: we're not sure. The prime suspect is pasteurella. It's endemic to rabbits. It's usually kept in control by the animal's normal immune system. It's an opportunistic bug, reacting when something disrupts their immune system and taking the opening to kill the rabbit. It's strange that Sunshine would have left such an opening --- we don't think she's been through anything disruptive, and she is a young, energetic rabbit. But it's the obvious guess given the sneezing and that she hasn't got other problems.

The treatment is a double barrel of antibiotics, one as eyedrops, one as a daily injection. This is the aggressive treatment. We are coming up on the one-year anniversary of the death of Penelope from abdominal cancer, and are just past the eighteen-month anniversary of Columbo from a disease that this vet suspected but could not prove. We could not give anything but the aggressive treatment.

Sunshine is not happy receiving it. Part of it is the injection. We built experience giving Stephen injections. He was old, though, arthritic and complacent. We had given Columbo some. He was trusting and patient. We gave Penelope subcutaneous fluids. She was hardened to life. Sunshine is young and does not see any reason that we should be doing things with the scruff of her neck. It does not help that the first time we on our own gave her the penicillin we fumbled it, causing her unwanted and unnecessary pain. We seem to be rusty. I think we're doing better at finding a spot in her back that she doesn't flinch from. But it is hurting her trust in us.

The eyedrops we assumed would be easy. She takes an eyedrop twice a day, in her cataract-stricken left eye, already. She is willing to take a second eyedrop in that eye. She does not even mind this has doubled the number of drops in that eye; we can't give the two different kinds of eyedrops in the same session, so she gets an eyedrop and a treat in two sessions separated by an hour or so. She sees no reason for us to fiddle with the other eye. She fights us on this. She's a young rabbit, strong and fast. She can get away from us anytime she wants. I've had to start anticipating the places she will run, and blocking them off while she's distracted.

She is not happy about this, and is not leaping out of the cage for her eyedrop and, more important, the treat the way she used to. We hope that the injections and extra eyedrops will be temporary, and will pass soon enough that she does not come to resent us permanently.

Maybe she will. As I write this she's come out of her pen and sprawled at my feet. I'm stroking her forehead and ears with my nimble toes. Rabbits love to be petted on the head and ears. Sunshine does not ask for head-pets with the quiet insistence of Columbo, but she does come up and hope for them, and I hope I can give her enough for us all.

I think she is sneezing less, just a couple days into the antibiotics.

Trivia: In an 1813 statement the English East India Company declared they were not looking to increase British demand for opium, and proposed raising the price of the drug in Britain to its highest possible levels and that it would support, if possible, banning the drug for all but medicinal purposes. Source: Tastes of Paradise: A Social History of Spices, Stimulants, and Intoxicants, Wolfgang Schivelbusch.

PS: Allow me to focus on one tiny piece of this shopping mall in mexico City. 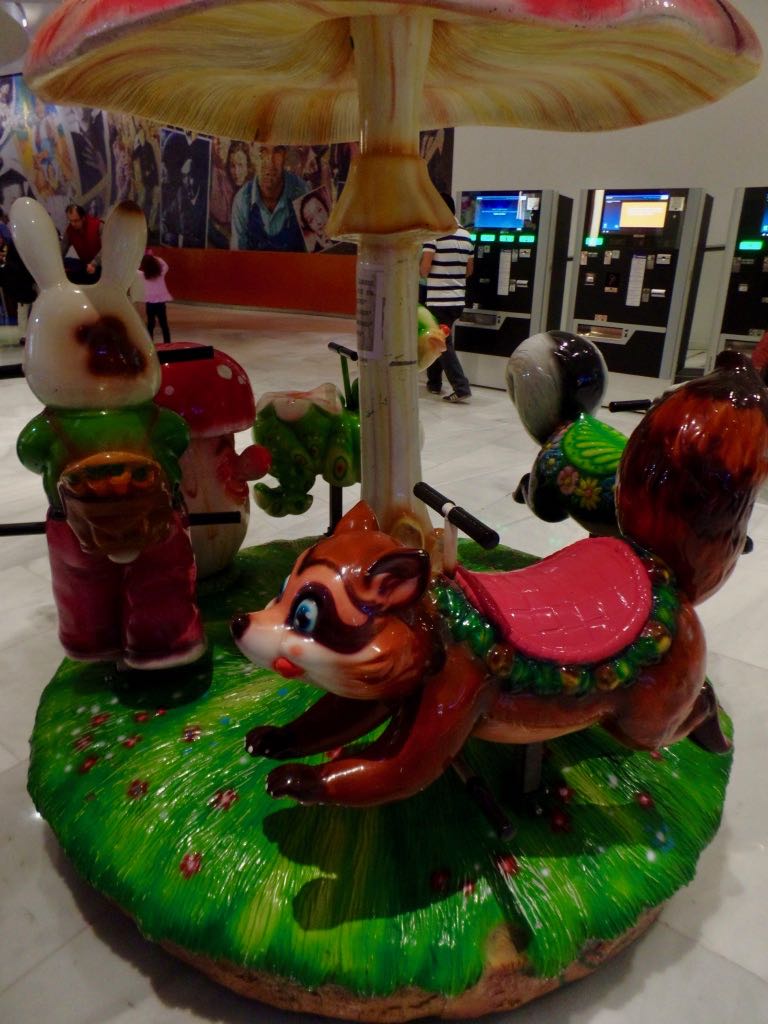 The food court had this cute tiny carousel, so I stopped for a picture of the raccoon. 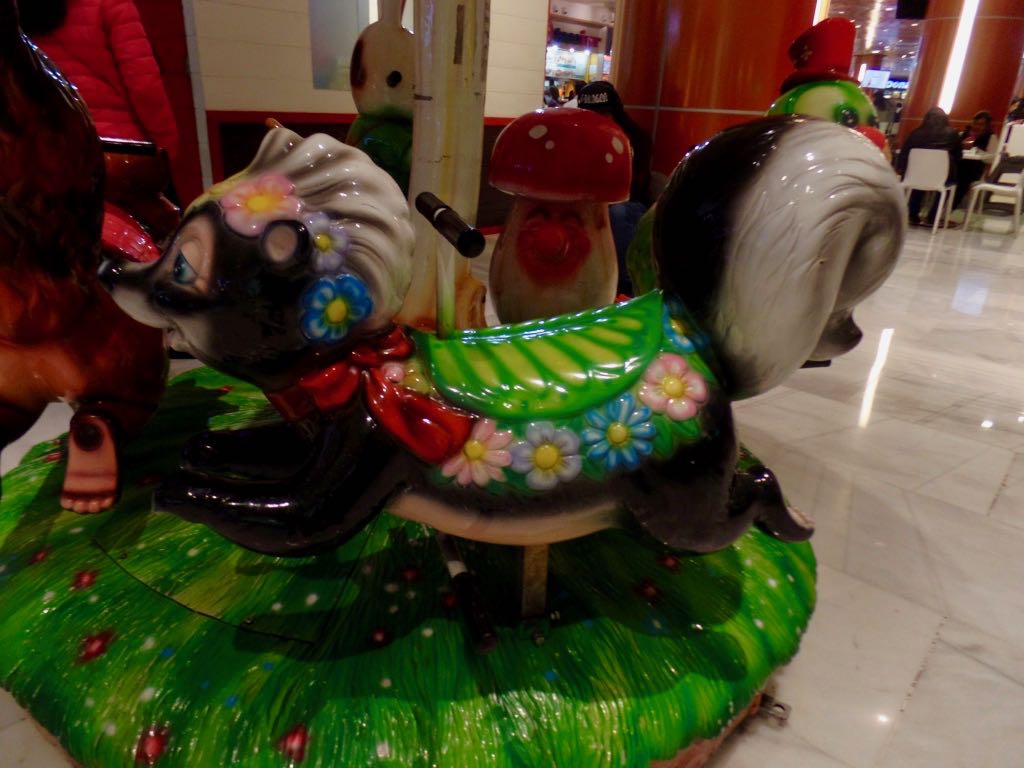 And here's the skunk, who is very clearly different from Bambi's friend in ways that would stand up to any legal action. 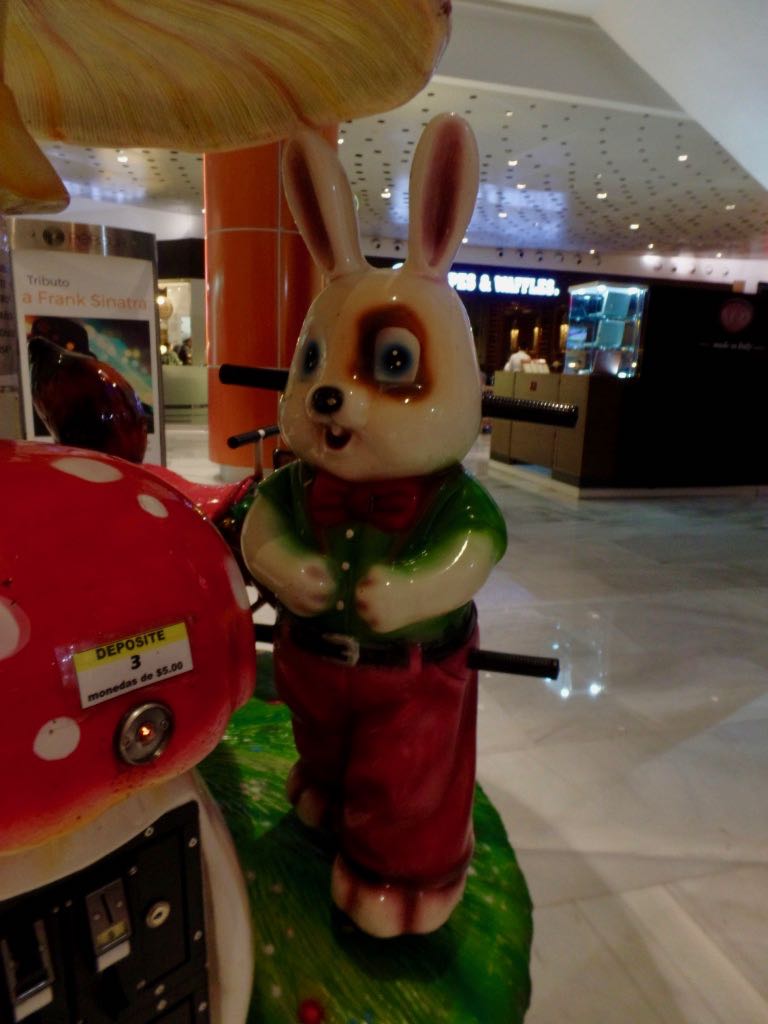 And for some reason the rabbit is bipedal and dressed for the kind of job where coworkers go out to Chili's for a celebratory dinner after some major networking issue is cleared up. Also you ride him piggyback, I guess.