I am sure you'll give in to the joy and believe

After riding Jack Rabbit we went immediately to the gift shop. We somehow discussed whether we should a little. But after the disappointment at Fantasy Island the day before, getting a souvenir early seemed worth doing. Better, we found they had some pretty good stylish t-shirts for the Jack Rabbit. We both got t-shirts (they turned out even to have a fitting room to try them out) and went to my car to stow things. The cheery, chatty guy working the gate seemed a little surprised we were leaving already and we assured him no, we were just dropping stuff off. He was glad for that, and no less chatty as we got back. We'd see him again later in the day, operating the swinging ship ride. When we got on that he joked to us that ``I look better than I did out front, right?'' I needed a moment to parse that and I'm still not sure he looked any different working a ride than overseeing people reentering the park.

bunny_hugger thought he was making some crack about the ride looking better in person than it did from the midway. Anyway he was more outgoing in three casual encounters than I've been all year, combined. Fun to see but I couldn't keep up with that kind of energy.

Seabreeze has two other adult-friendly roller coasters, both huddled at the south end of the park. The next one we rode was Bobsleds. It's a junior roller coaster, with a great big wooden structure. But metal tracks of thin tubes which

bunny_hugger identified as being like Disneyworld's Matterhorn. The cars are styled to look like bobsleds, and even have country names painted on them, including, yes, Jamaica. But they have separate front and back seats. It hugs the terrain, a fair bit, taking advantage of the hill it's on to start with a drop and only using a lift hill later on in the ride. It's mostly small drops and hills, although there's a couple of big drops for pretty good thrills. It's not as good as Jack Rabbit. But it is a really sweet ride. I'd call it the happiest surprise of our trip.

So to this coaster's mysteries. The ride opened in 1952 as Junior Coaster. In the early 60s Seabreeze's owner, George Long, visited Disneyland and concluded the Matterhorn's tubular steel track would be a good way to spruce up this ride. And so in 1962 they rebuilt it, with a new name, new track, and a third level of the roller coaster. This is why it's such a weird design; it, rather like Kennywood's Thunderbolt, is a roller coaster expanded upon, as well as somewhat changed in type.

The other roller coaster is Whirlwind. It's the park's newest roller coaster, joining their lineup in 2004. It's a spinning coaster, the twin to Steel Dragon at Waldameer. Also to Laff Trakk at Hersheypark, but we haven't been to Hershey since that was installed. It's nice ride, bright and fun. Each ride we were able to take by ourselves, so that we were able to choose to go up the lift hill backwards. This isn't

bunny_hugger's favorite, but this and Steel Dragon are the only chances I get for that. The cars seat four people, and on Steel Dragon usually people rush for the back seat and we get what's left. The ride's perfectly fine, of course, and a couple times we rode we got some pretty good spinning going. It's just that compared to Jack Rabbit and to Bobsleds it's kind of mundane.

We thought if we would find pinball at any amusement park our trip, this would be the one. Seabreeze has got an atmosphere very like Rye Playland (which has pinball in two arcades). In the Seabreeze arcade we found ... nothing, which felt out of character. There were some fun games there, though.

bunny_hugger was intrigued by a Killer T-Rex game, the objective of which is to toss softballs into a dinosaur mouth. She played a couple games of this, getting enough tickets to ... not really get any interesting prizes. But the playing was fun.

The other thing we had to do at Seabreeze was get to the carousel. Seabreeze lost its antique carousel, and its Wurlitzer, in a terrible fire in 1994. They had bought a replacement, the frame and mechanism of Philadelphia Toboggan Company #31, and restored it, commissioning hand-carved horses to join the four that survived the fire, in a process of historical care that long impressed

rapidtrabbit. And we understand now why. It is a lovely carousel, handsome and well-cared-for. The process is described some in this essay by a local historian. I don't know how to find Rapid's reports on the carousel.

And it's accompanied by a restored Wurlitzer band organ, an enormous thing playing at full volume. And for a wonder we could tell you what they played. Seabreeze claims to have the world's largest collection of the music rolls for the Wurlitzer Style 165 Band Organ. They say it's a complete set of the scrolls. There's a small shelf beside the band organ that shows the boxes for today's music scrolls, and even which of the tracks they're playing. So while we were there we'd hear songs like Vaugh de Leath's Hawaiian nightingale or John Boulton's Yankee Tars. Repeatedly, because we kept coming back to the carousel and its building. I think that for as much as Jack Rabbit and the Bobsleds were the roller coaster high points of this trip, the carousel and its building dominate my thinking about where we were and why we were there.

But part of the carousel building's charms, besides the carousel, is the park's history. There are historical bits all over the park. But they're concentrated tightly here. There are plaques about the carousel, of course, and describing the 1994 fire and renovation. There's even a flyer, photocopied on both sides and set out for you to take, about the Wurlitzer. There's old carousel figures, the``Leopold Lion'' and its relations, part of the park's family history. The park's owned by the Long family. Edward F Long started building carousels in 1876, and they had on display a lion which had been at Bushkill Park in Easton, Pennsylvania, until about 1950. Edward Long made a series of carousels, one of which was a ride at Seabreeze park, and one thing grew into another and what do you know but the family bought the park and has kept it since. That's great.

They have a good pile of historical interest stuff. Wooden mounts from old kids rides. The backglass of a Hit-A-Homer coin-drop game. Souvenir plates and mugs. Pennants from the decades the park was known as Dreamland. (The park was originally named Seabreeze to match the nearby hotel. The name seems to have changed around when George Long bought the park in 1946. It changed back in the 1970s.) Framed vintage newspapers advertising Rochester's Million Dollar Playground and showing that the name was not always consistently Sea Breeze or Seabreeze. (They seem to have mostly settled on Seabreeze today.) Tiles from their Natatorium, which the advertisements claimed was the largest salt water pool in the world. (Remember, if people wanted fresh water, Lake Ontario was right there.) Ads for the Tumble Bug (``A ride you'll want to try and try again and again'') or The Wild Cat roller coaster (``Fills the Old Ravine - Gives More Than a Thrill - You'll Ride It Once and Then Come Back For more'') or the Virginia Reel roller coaster (``The Old Favorite - The Ride They All Take at Sea Breeze Park - Join the Crowd of Merrymakers Opening Day and Tell Your Friends to Meet You at the Virginia Reel''). The opening-day promotion for 1926 was, ``Free! A Gaily Colored Bathing Cap for every woman bathing in the pool (Today)''.

And ... signs. For the Fairyland zoo attraction, circa 1950. Like many parks, Seabreeze used to have a petting zoo. They had a sign listing birds in that enclosure, including the white zebra finch, cordon blue finch, saffron finch, cutthroat finch, silver bill finch, lavender finch, steelfinch, firefinch, and even some birds which were not finches. Like, the common waxbill, the golden breasted waxbill, and the orange cheeched (sic) waxbill. Also according to the modern interpretative sign they'd had ``ducks & geese, rabbits, Henrietta the Tapir, goldfish pond, bird house, a coatimundi, and of course Spitzy the Llama!'' Well. That fills me with ambivalence. I can imagine a coati being a fascinating petting-zoo animal, since coatis are big and unusual and about as intelligent and dextrous and sociable as raccoons --- and they also had a sign for the Raccoon that they must have had there. But ... jeez, what kind of care was an exotic raccoon-like animal, 1500 miles away from anyone who had ever seen one in the wild, getting at a small, family-owned amusement park in Rochester, New York, in 1950?

That the sign said ``a coatimundi'' is also alarming, since coatis are social animals. Maybe he hung out with the raccoon. Coatis and raccoons seem to interact in that way where you're not positive they realize that they're different species, or care. But still. Yes, Hersheypark has coatis in its ZooAmerica section, but that's a zoo, proper, that at least meets Association of Zoo and Aquariums standards. Six Flags Great Aventure allegedly had some within its park around the time the Kingda Ka roller coaster opened but, again, that's a regional park owned by a multinational corporation and that by then already had a quarter-century experience taking care of exotic animals.

bunny_hugger did, and thought about whether to warn her, and if so about what. She discovered it and said, oh, so that's what I was looking so stunned at. I didn't realize that I was, but maybe my poker face is also my shocked face.

But, well, for all we love amusement parks, and their history, there's nasty stuff in that history. The use of animals is part of that. Some of the historical photos include a 1961 ``Visit Dreamland Park'' fire truck, with a chimpanzee hanging out as part of the promotion. It's hard to imagine the chimpanzee had a great life (it was ``on loan from one of the free acts performing at the park'') and there's nothing to do but acknowledge that and cherish the good parts. By this I mean I wonder how welcome black men felt at the Natatorium. (It closed early on in the Great Depression and was covered over, eventually becoming a bingo hall. Many amusement parks had their great swimming pools through the 1960s or 1970s, when they were obliged to integrate, and so instead closed.)

Trivia: Apollo 10's photographs of the Sea of Tranquility landing site, as photomosaics, were delivered to Cape Kennedy to use in training for Apollo 11 on the 9th of June, 1969. Source: Where No Man Has Gone Before: A History of NASA's Apollo Lunar Expeditions, William David Compton.

PS: Reading the Comics, July 13, 2019: Marginal Supplemental Edition, some comic strips not worth talking about.

PPS: We continue to try and find the entrance for the biggest roller coaster in La Feria. January 2018. 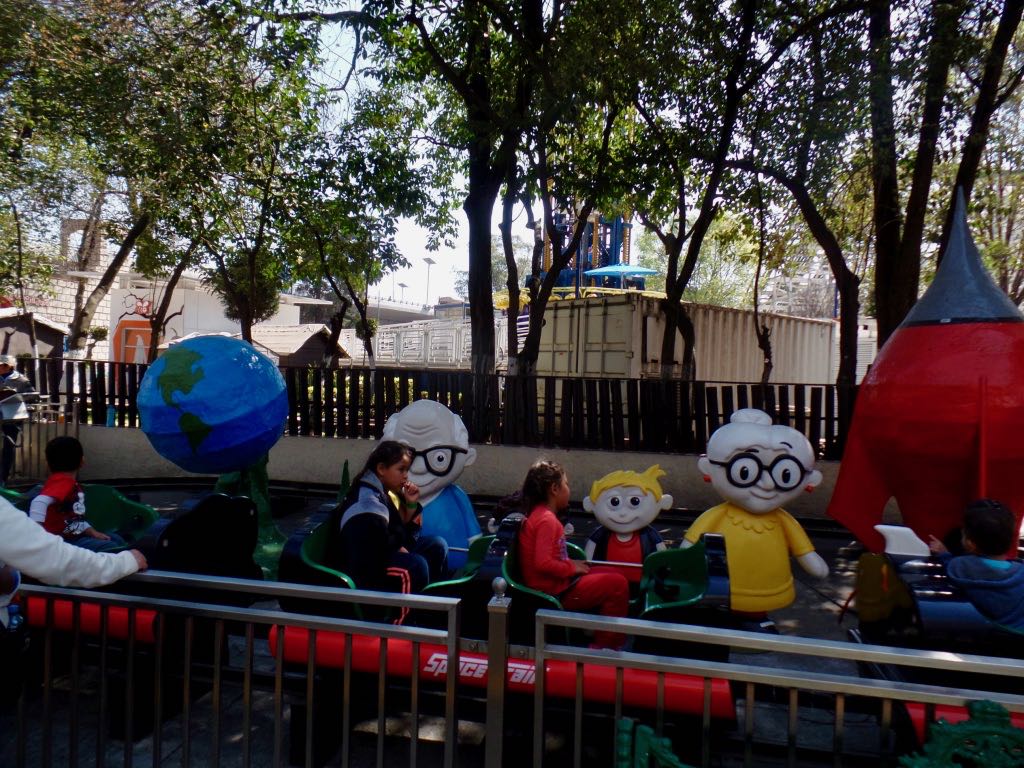 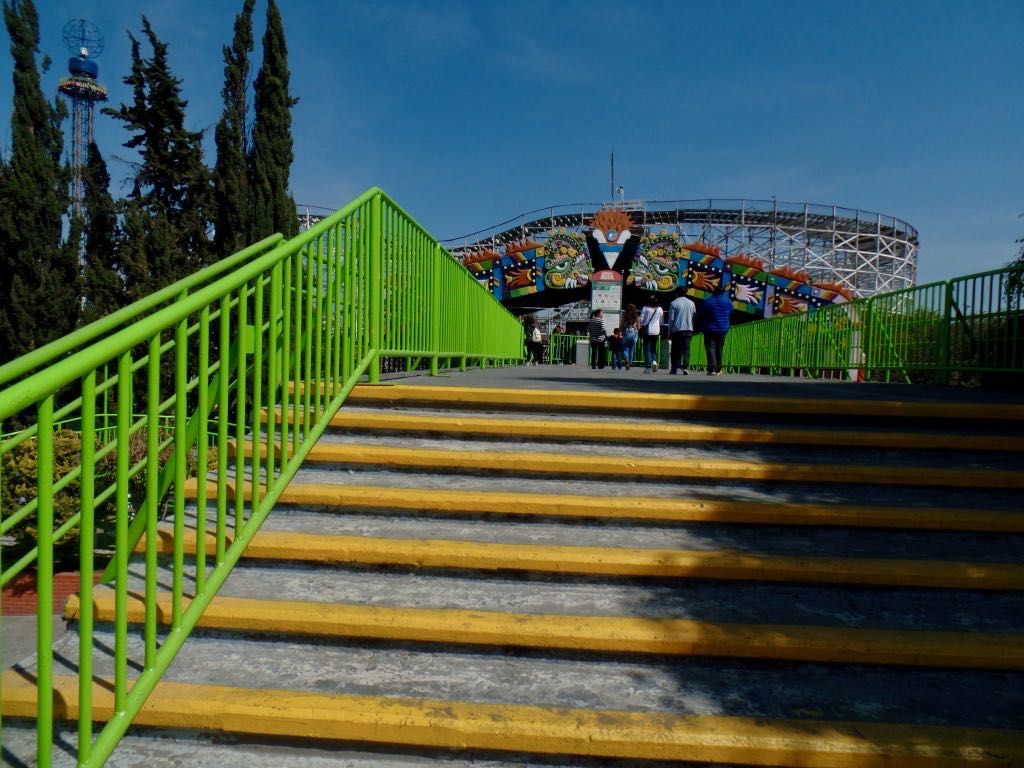 And hey! We finally found the entrance for Montaña Rusa! The bridge leading to this is pretty near the front of the park and we charged right past it in our race to the lift hill. Did we ever mention the park doesn't have any maps that we could find and has precious few signs directing where attractions are? 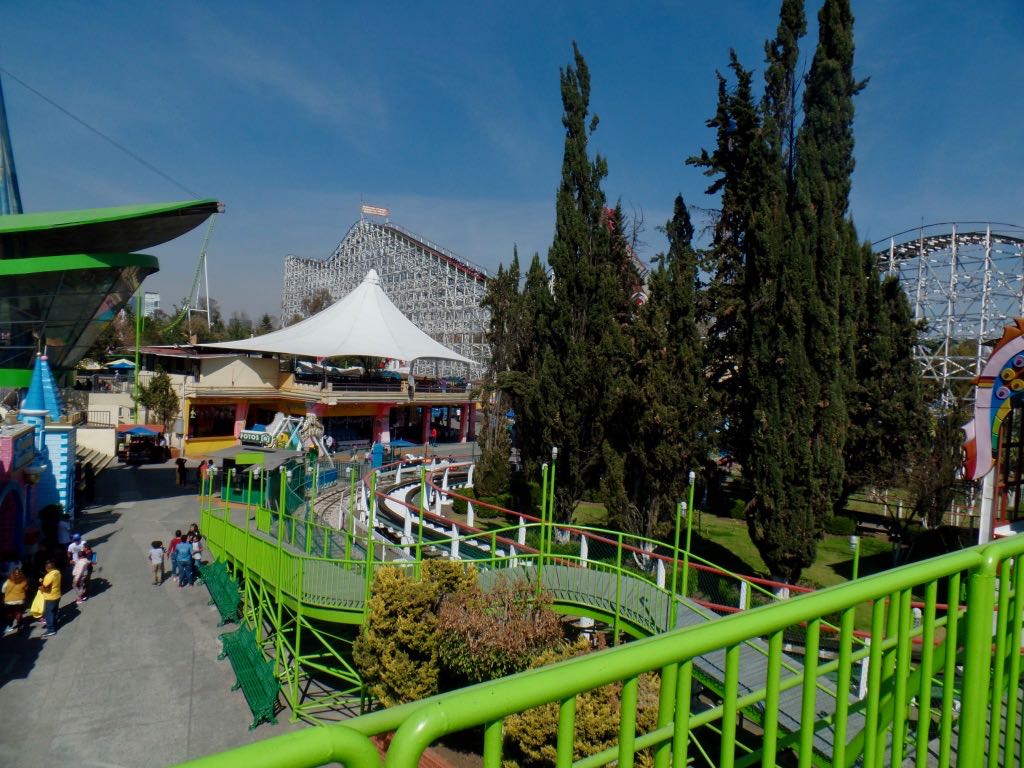 And here, now, we view from the bridge leading to the entrance of Montaña Rusa, showing the lift hill and the turnaround and oh, hey, the miniature train ride running beside the roller coaster.