Before I start our visit to Darien Lake I thought people might like a health update on our rabbit Sunshine. She was last reported-on in these pages with a diagnosis of probably-pasteurella, with a prescription of antibiotics. This was to be a penicillin injection, shot into the loose scruff of the back of her neck, and eyedrops, one in each eye.

I do not our attitude, when we heard of this plan, was one of hubris. We were confident we could do this, yes. We've given Sunshine a drop in one eye twice a day for fifteen months now. How much harder would another drop, in both eyes, twice a day be? And while we had less practice with the needle, we had some. We'd given Stephen, Columbo, and Penelope injections, some for disease, some for hydration. We might be rusty but we were confident we'd be back to full Bunny Nurse form, quickly.

So. It's been harder than we expected. Sunshine is well-trained to sit still for an eyedrop. An eyedrop, and after she's had the first she wants to leave and get her treat. She does not understand why we're giving her another, and this one in her good eye. Also the antibiotic eyedrop is a more viscous substance, one that's harder to squeeze out and that's more prone to getting caught on her eyelashes, a sensation which she Will. Not. Put. Up. With. So we have had to adapt, particularly holding the bottle much closer to her eye than we do for the other drop. And at that she squeezes her eye closed, so we're forced to pry it open. There's no chance that she understands this. We can only hope that we're almost done inflicting this on her, and that she'll come to forget it.

The injections ... oh, now, this has been harder. Sunshine is surprisingly sensitive to pokes in the scruff of her back. The other rabbits took the needle impassively, or with a quick flinch and then indifference. She notices, and she doesn't like it. And she is a young, strong rabbit. She will try to flee. After several attempts at this we finally resorted to the Bunny Burrito. This is not some irresistible great treat, although great treats help matters. This is setting the rabbit down on a towel and wrapping it up so that her four legs are bound tight to her torso. This makes it impossible for her to flee or to punch you, at least not before she gets out of her wrapping. And if you combine that with setting your legs around to brace her, it's very hard for the bunny to get loose. This may sound extreme, but it is for urgent need. And it may be good for the rabbit. Bunnies tend to be claustrophillic, and a good close bundle can feel very secure.

But apart from needing the Bunny Burrito the injections are going well, right? ... Eh. No. We've had a surprisingly hard time with them. Sunshine flinches a surprising amount and, before we used the burrito, could shake loose and spill drops of penicillin on the floor. We could only hope she was getting what she needed. And we've had trouble with the syringe plungers not moving, including one day in which it froze up completely and I could not budge it. I finally got the injection done, after several jabs and two needles, and the loss of all faith Sunshine might ever had had in me.

bunny_hugger's mother, a retired nurse, believes the needle freezes are symptoms of the penicillin solidifying in the time between when we drew it up and when we injected the rabbit. So no more drawing up the needle ahead of time and then fetching Sunshine. Also the vet's advice that we should, after injecting, pull the syringe back a little, to be sure there's a partial vacuum? I think that's good for more than making sure we haven't accidentally penetrated the loose rabbit skin twice. It seems to make it easier to make the penicillin flow.

And then there was an outright scare. We noticed Sunshine not finishing all her food. Rabbit need to eat, basically, continuously. If they feel a little unwell, they might stop eating, which causes their gut bacteria to die, which makes the rabbits die. Her illness getting worse? The antibiotics killing her gut bacteria? Or just the heat wave, which has been terrible the past couple weeks? (It's bad enough that yesterday we moved Sunshine into our bedroom where we could leave the air conditioner on, an extreme but necessary move.) ... Possibly, although

bunny_hugger noticed that Sunshine was also eating a lot of cardboard. She likes chewing cardboard. We toss her a fair amount of it as toys. Boxes that packages came in or the tubes for toilet paper or paper towels are great chewable rabbit toys. But she's been eating a lot of them lately, and maybe had eaten so much she was full up on those instead of, you know, nutrition. So, over her protests, we took all that out of her pen and within a day she was back to eating her nutritional pellets and her treat vegetables and the hay that isn't much of anything but that's good for her to chew. So that seems to have been an unrelated issue.

But all these frustrations are forgiven when they cure the rabbit, right? So ... is that working? And I'm not sure. Usually a two-week course of antibiotics knocks out the infection after a couple days, and the rest is just making sure no bugs have the chance to build up a resistance. Sunshine's sneezing ... seems to have declined, in frequency and in intensity. I haven't heard her do a string of, like, a dozen or more little sneezes in several days, for example. But she was doing strings of low-intensity sneezes as much as a week after we started the injections and eyedrops. It's hard to say for sure, though, because we were foolishly not logging our impressions of the frequency and intensity of her sneezing before we started treatment.

bunny_hugger remembered though that Sunshine has always been a sneeze-prone rabbit. And this offers a plausible but ominous prospect.

It might be that Sunshine has chronic pasteurella, the disease never really going away. It might have always been just enough to irritate her and only this past month gotten bad enough that we had to act. But perhaps we'll have to manage it the rest of her life. Which could be as long and full a life as Stephen had, yes. But it would require us to keep her on antibiotics through that. And ... if this is the case, then she's contagious, and could never conscionably be kept with another rabbit, except one who also has chronic pasteurella. We hadn't decided definitely to find a companion rabbit for her, but that possibility, always difficult, might be harder than we realized a month ago.

Her follow-up appointment is next week, and perhaps there will be ultimately only good news.

Trivia: The landing of Viking 1 on Mars was shadowed by a computer-simulated mission in the Lander Support Office at Martin Marietta, with all commands to the actual lander duplicated in the simulator. Source: On Mars: Exploration of the Red Planet 1958 - 1979, Edward Clinton Ezell, Linda Neuman Ezell. NASA SP-4212.

PS: More of what we did immediately after our first roller coaster ride at La Feria. Go ahead, guess what we did with this racing coaster after a single ride. 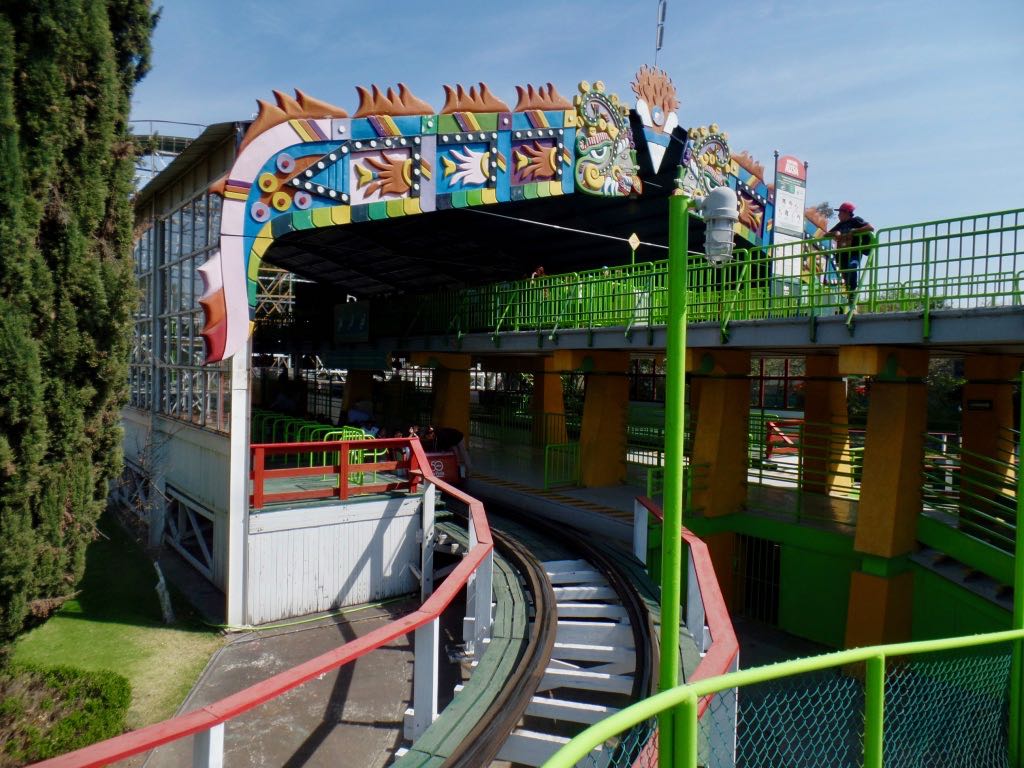 And a look back at Monta˜a Rusa after our first ride on it, and as the next train gets ready to depart. 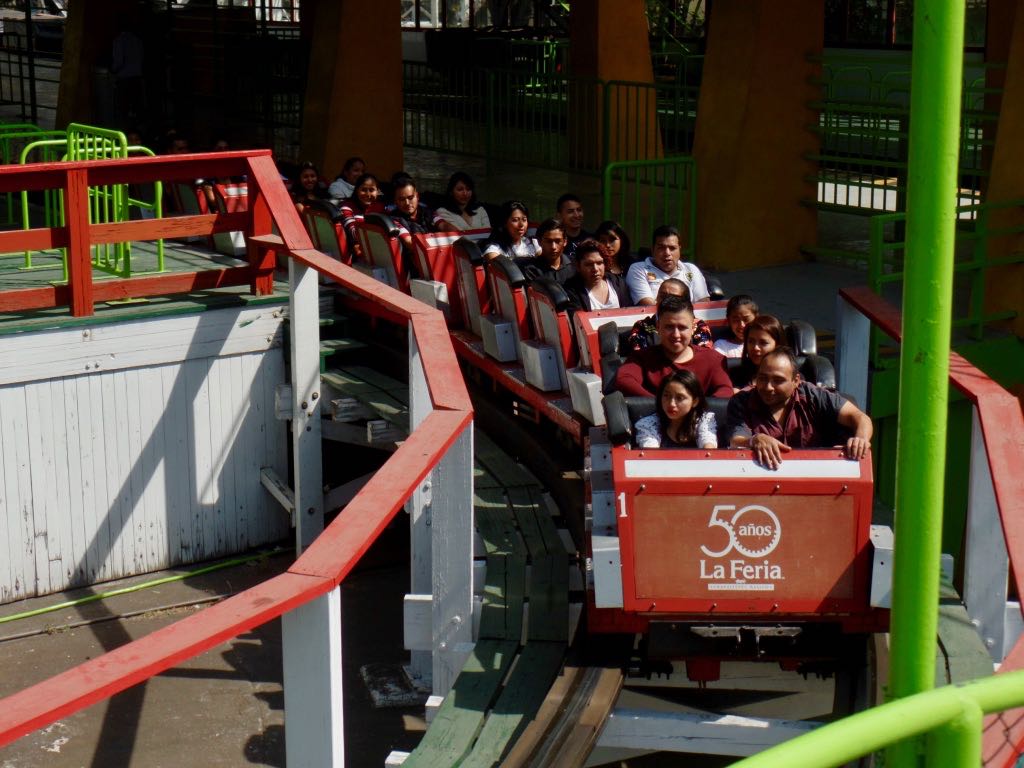 A freshly-dispatched train emerging into the light. 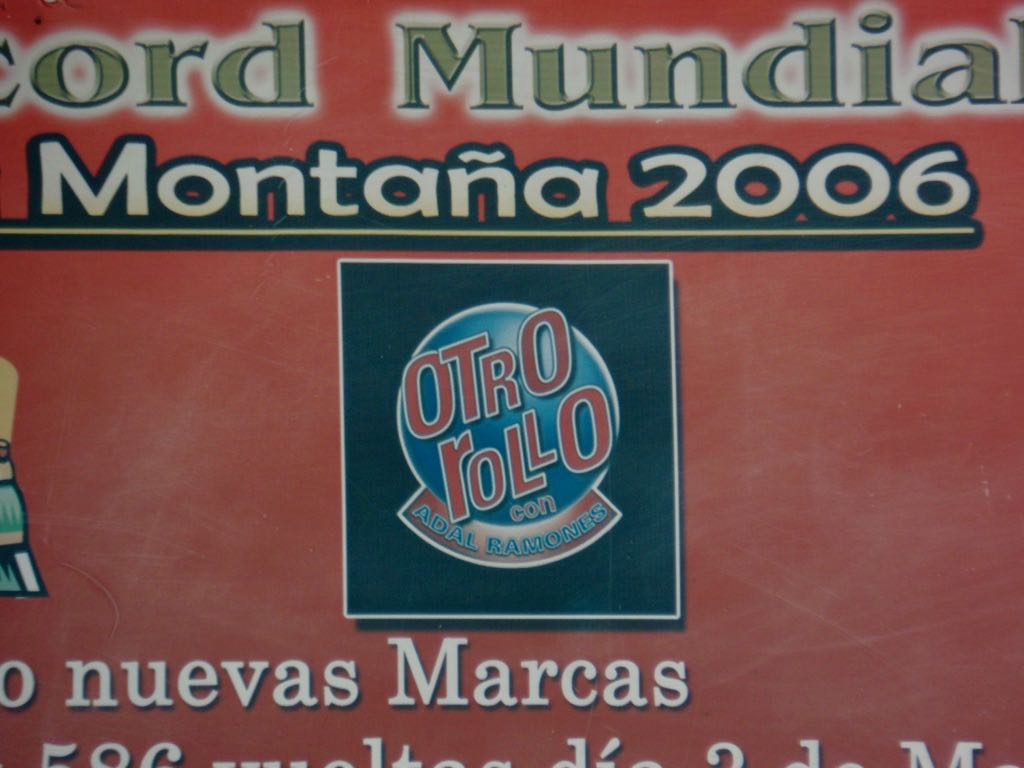 So we went right back for another ride, hoping to get on the other side of the station. On the way, I took some detail photographs, like of the logo for the curious Otro Rollo event. Obviously it was some kind of roller coaster marathon. We couldn't find more about it at the park, although that's fair enough for something that was a dozen years in the past even if it did see world records getting set.