So here's another thing about Darien Lake that encouraged us not to go out Sunday night after all. Their operating hours. That Monday, it turned out, they would open at 11 ... and close at 5 pm. This is so shockingly early that we literally did not believe it at first. But that's what the web site insisted. The next week they would move to full ordinary summer hours. ... Really, if I had taken

bunny_hugger up on her offer, the Thursday we drove into Canada, to postpone everything a week we would have had many more night hours available at every park. And better weather, although there was no reason to suppose that would be so. But the hours meant that we could not, say, sleep in until noon, get to the park at 1 pm, and have eight hours (or whatever) until it opened. We would have to get there near 11 am to be confident we'd see it all. We were about an hour's drive away, and we need about an hour to get going in a typical morning.

Darien Lake is not a small park. Not, like, Seabreeze or Fantasy Island small. It's not Canada's Wonderland big, though. It's around the size of Michigan's Adventure. A bit bigger: it has eight roller coasters, and some facilities which Michigan's Adventure lacks, such as theaters for shows. But, still, Michigan's Adventure we can visit and explore fully, if there aren't crowds, in two or three hours. Six hours would probably be plenty if the park were not packed. We just had to get up early enough for it. And, the park projecting a six-hour day implies they didn't expect crowds either. If they expected the place to be packed, they'd be open through 8 pm, or 10 pm.

Also we would get into the park cheap. The American Coaster Enthusiasts have a nice deal with Six Flags parks in which, through mid-season, we get free tickets.

bunny_hugger printed out the coupon from ACE's web site and then, out of a cynical suspicion brought on by nothing ever working sensibly, printed out a second one. This just in case for some reason the ticket-taker refused to let me and

bunny_hugger, who are two separate people with separate ACE cards and all that, use the same single sheet of paper for something distributed on ACE's web site. But what would be the chance of some daft circumstance like that happening?

Oh, also, Darien Lake is a Six Flags park. It wasn't, last year. Six Flags just took over the place. This eleven years after Six Flags sold the place. That was part of Six Flags's bankruptcy-driven retrenchment. The park was owned by, oh, a confusing string of those real-estate-investment companies that do so much to destroy everything ever. For a while the park was managed by Premier Parks, owners of Clementon in New Jersey and Elitch Gardens in Denver. But starting in 2018 Six Flags began operating the park, and Wikipedia suggests that they're just managing it for EPR Properties. This is confusing, like I said. But they've started branding the place Six Flags Darien Lake again, and they accept ACE's deal with the Six Flags parks. It did mean that while key signs had the Six Flags logo, much of the park merchandise did not yet, so we could experience the park almost as if it were still an indie.

And more excitement. Darien Lake has eight roller coasters. If they were all operating, and we were able to get to them? I would ride my 250th sometime this Monday. This not even a year and a half after my 200th, on Medusa Steel Coaster at Six Flags Mexico. And if we were able to get on only a couple,

bunny_hugger would ride her 275th. We briefly considered arranging our rides so that we would hit our milestones together, but that seemed like far too much effort. And far too contingent on the crowd and the park rides cooperating. I hadn't realized I might reach 250 or I'd have printed out a sign for my picture.

bunny_hugger didn't expect to reach 275 on this trip and also thought that too minor a milestone to send to the ACE newsletter. But we thought we would use the hotel business center to print out a 250 sign, and then forgot.

Monday would be a nice, bright, clear day, the first truly nice weather of the trip. The first good weather in, like, four weeks. Because it was a Monday, the hotel's continental breakfast would end earlier than we wanted. But we had to get up just early enough that if I went straight to the breakfast area, before even showering, I could grab some more fruits and make some more egg bagel sandwiches and the like. This I did.

We got to Darien Lake under brilliant, beautiful skies and a parking lot remarkably empty. There was a wait at the customer-service desk, people with will-call tickets and the like, and the line was slow-moving. We chatted some with a couple ahead of us, also roller coaster enthusiasts who were doing a breathtaking tour of their own. I think they had been to Hersheypark just before, and were heading for Canada's Wonderland and Kings Island, and had been thinking about Michigan's Adventure but thought that park --- at the far end of the lower peninsula --- just too far out of the way for a trip I would estimate covered 86,400 miles of driving already.

The woman working the will-call desk viewed our claim of ACE membership and free tickets with suspicion, but slowly came to accept that. She asked which one of us was getting the free ticket and whether we wanted to use the 50% off that the other coupon on the page offered. We tried to explain that the deal was one free ticket for every ACE member and we were both ACE members, a matter that just seemed to confuse things. My recollection is foggy but I think at one point she was asking about codes, which is never a good sign.

bunny_hugger asked if it would help that she had a second copy of the coupon. This was also viewed with suspicion, but on our word that it was a discount given to every ACE member and that as far as we knew it was not tied to any account number, she slowly accepted it. We got our complimentary tickets --- nothing stylish, just an inch-long piece of receipt tape and a bar code --- and looked at the entrance queue.

Which I have not yet mentioned. The line for this was ... enormous. Some might say terrifying, and still understate it. Because there were few cars in the parking lot. What was there was school buses. Lots of school buses. A new school bus every two minutes, disgorging another phalanx of teenagers. All the while we waited at the will-call desk,

bunny_hugger glared at the army coming in to make the park crowded and, if past experience with teens is a guide, unruly. I can't attest that she grabbed my arm in alarm at a decent day being torn away from us, but it would be in character. I tried, as ever, to make the best of it, proposing that what we were seeing, besides every school in Western New York having its Class Field Trip Day at once, was the entire day's population of the park crowding in in one fifteen-minute stretch, instead of over the four hours it normally would. Still, a park crowded with teens, who generically have pretty bad habits about stuff like orderly queues and following the rules about how to ride roller coasters? And who would surely be at the park until closing, or at lastest maybe 90 minutes before closing? This could flood the park out from us.

bunny_hugger would almost surely reach her 275th coaster. I would reach my 250th if all went well.

Trivia: Apollo crews dubbed a sheet of aluminum foil, set out at the start of a moonwalk to collect solar wind particles, the ``Swiss Flag'', as it was designed by Dr Johannes Geiss of the University of Berne and was unfurled along with the United States flag. Source: Where No Man Has Gone Before: A History of NASA's Apollo Lunar Expeditions, William David Compton.

PS: More of the roller coaster! At least approaching the other side. From our La Feria trip, January 2018. 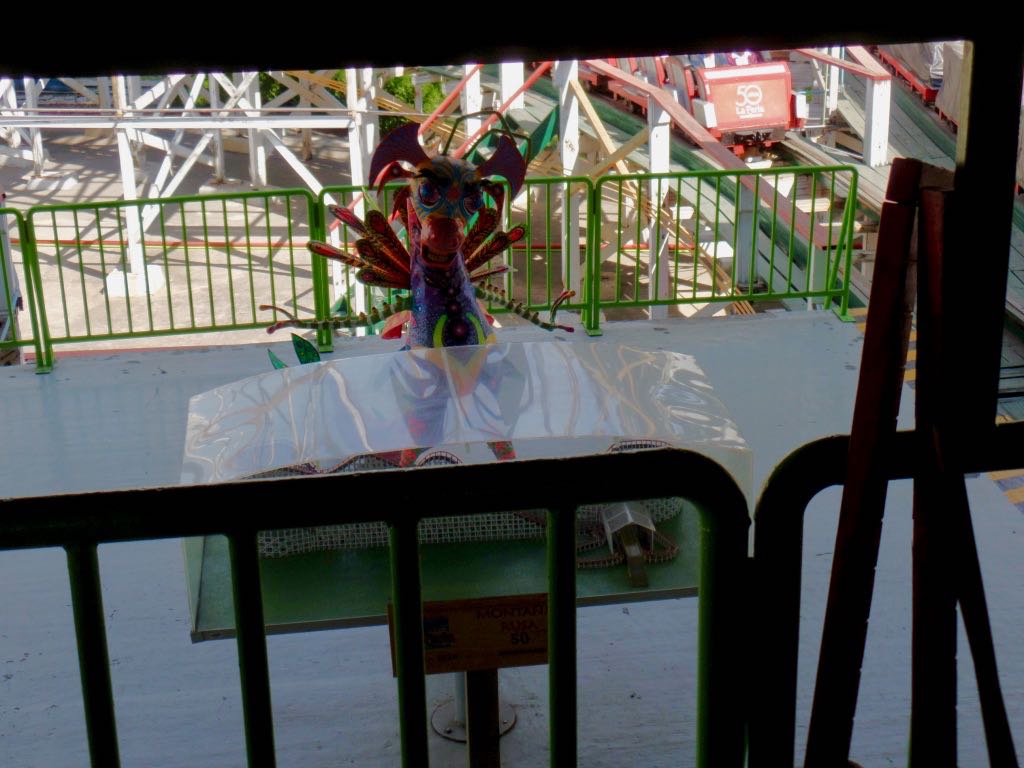 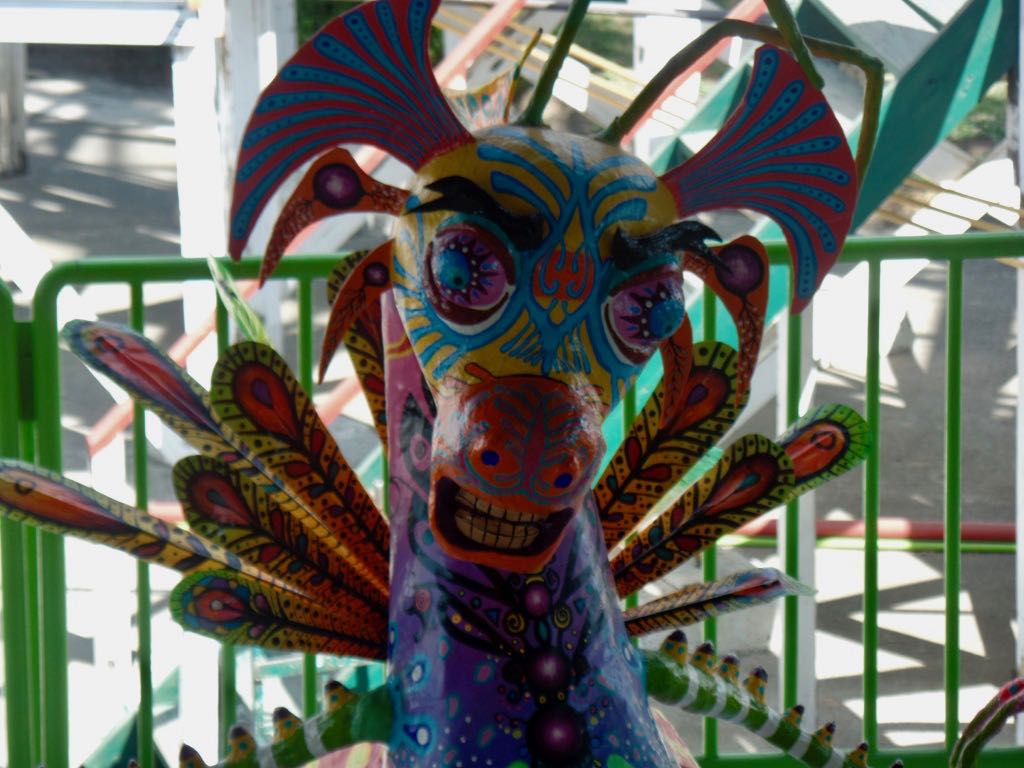 Oh ... yes, there was this thing in the way. Let's not worry about it, though. 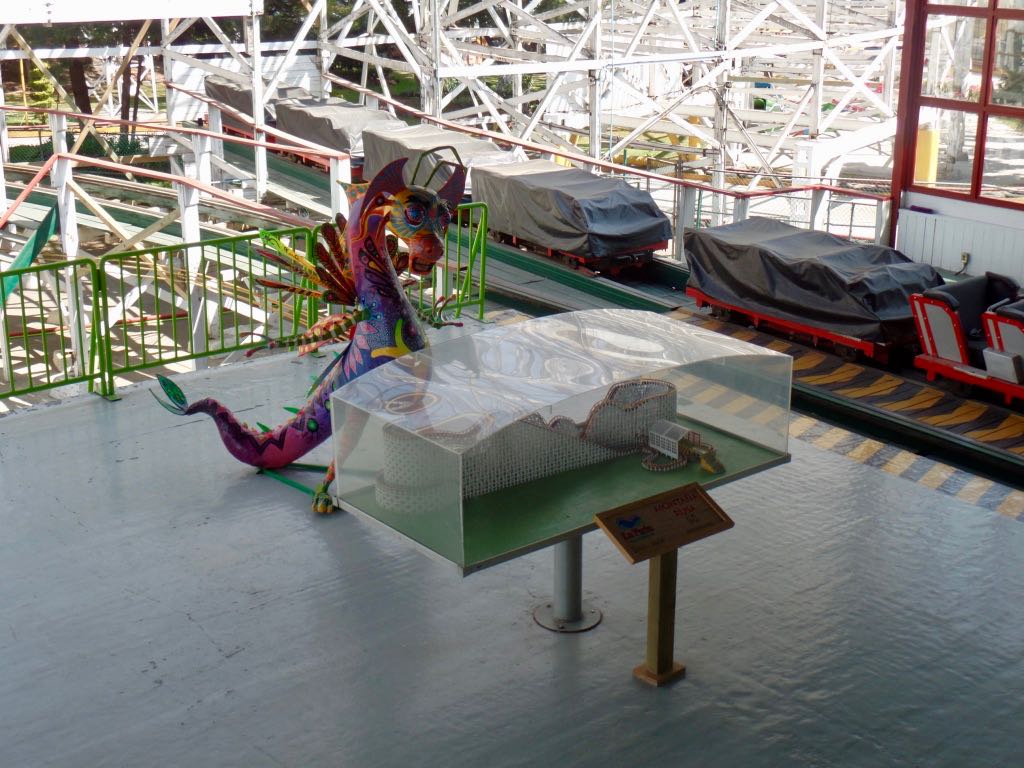 There we go! A decent view of the roller coaster model, plus the other train that hasn't been run for, by some reports, years now. It must be some serious maintenance issue: we found that at an American Coaster Enthusiasts event a couple years ago they didn't run both trains, and if there would be any time that they'd bring out the staff to run both sides at once (the trouble with racing coasters is they need the staffing of two roller coasters, after all) that would have been it. No hypotheses about what the issue is.