Hail to the black and the blue!

Darien Lake. There wasn't anything to do about the crowds but observe them. From the entrance midway

bunny_hugger observed the crowds moving mostly to the left, towards the Ride of Steel hypercoaster, a full-circuit coaster over 200 feet tall. It's much like Magnum XL-200 at Cedar Point. It's still Darien Lake's tallest ride. So on her observation, we went to the right.

This took us to MotoCoaster, Darien Lake's second-newest roller coaster. Its cars are shaped like motorcycles, and you ride them leaning forward. The design was an attempt to make a modern version of the Steeplechase rides of the 1920s. It's a launch coaster, using a flywheel to give the train a sudden burst of speed rather than using a traditional lift hill. This is a fun motion, reminiscent of the linear induction motors that I like. The ride's at its best when it acts like a motorcycle racetrack. The hills and such are really kind of a let-down, considering.

We exited through the gift shop, although actually, they'd left gates open so that it was really easy to not. Mostly we went in to get a park map, and while we looked over where the roller coasters were someone came up to ask if we were looking for anything. Which, kind of, but we had already figured out where the nearest next roller coaster was so we didn't need the help. We set off along the far, slightly under-developed side of the pond to get to Viper.

Viper's the second-oldest roller coaster at the park. It's an Arrow looping coaster, which promises that you'll go upside-down, and when the track changes direction, you'll feel it. The station looks a bit run-down, as we all might after forty years. What's delightful, though, is the long queue into the park. It looks like they planted shrubs and trees along the path when the park opened in 1982 and have kept them all going since. It's almost a hedge maze to walk in, full of dense green and great flowers and bees. We paused a bit to admire a bunch of nice giant bees poking sleepily around at their business. While we did we overheard a woman complaining about the bushes. It's not even as though they grew past the wooden fences; they just provided shade and color and scent and thriving bees. What's to complain about?

Viper, which has a snake motif, was just the ride we'd expected. The trains have a nice scaled pattern, which is surely from recent renovations. And with this,

But we didn't race immediately for another roller coaster. For one, there wasn't one nearby. For another, we did want to see some of the park's setting. Adjacent to here, for example, is the Performing Arts Center, past a gate but near enough for us to look at. We saw the entrance to Grizzly Run, a river-rapids ride that we might have gone on had it been a log flume instead. The weather was finally nice and sunny enough that we could consider a gentle water ride. And then I noticed the ride safety sign for Grizzly Run said Rowdy's Ridge and was delighted by this disagreement. Relabelling owing to the recent Six Flags takeover? ... No, it turns out. Rowdy's Ridge is the name of the area of the park, while Grizzly Run is just the particular ride within that area. I'm very happy to have an amusement park with area theme names, and ones that you can find on the signs easily.

The ride, Moose on the Loose, is described on the safety sign as ``[featuring] vehicles that gently rock back and forth while moving slowly along a winding track through animated scenes''. This is fair. This may also remind one of a Parc Festyland ride, La Chevauchée de Guillaume, which we enjoyed when we were there a couple years ago. Both rides have a mount that rocks back and forth and putters along a track. Festyland's is a horse, naturally. Darien Lake's is a moose, and one who talks nearly the whole ride, telling cornball jokes and bragging about how great moose are. Moose are, apparently, one of the park's iconic theme animals. Six Flags's renewed ownership has not brought back the Looney Tunes licensed characters, not yet anyway. Moose, though. That's definitely a Darien Lake thing.

The ride operator granted that

bunny_hugger and I could ride, even as unaccompanied adults. She sized us up correctly, thanks to our T-shirts from distant amusement parks, and talked a bit about Cedar Point and other favorite places. She did say that we couldn't be dispatched, though, not until we put our hands up to our heads, fingers spread in antler pose, and said `Moose on the loose'. This wasn't special treatment; everybody got that. It starts the ride off in the right spirits. It's a marvelous, goofy ride and I recommend it.

One of the scenes you putter through is of a hornet swarm. The park's Flying Scooters ride (which we didn't go on) is called Hornet's Nest and has the scooters' tails painted with hornet mascots. The Rowdy's Ridge entrance sign shows a moose, a bear, and some hornets. So apparently the park has decided it may have a hornet problem but it's not going to hide from that. I admire the chutzpah. We were not bothered by any insects.

Oh, also, a little bit of fun? They had a ride named Raccoon Rally. This is a junior bumper cars ride, so we couldn't go on it. It's nice to see raccoons getting some positive attention, though. And it wouldn't be the only raccoon mascots we'd see that day.

We also paused to admire the Sleighride, a ride which looked a great deal like a Muzik Express. But each of the cars was separate from the others, swinging freely. The ride has this great vaguely Russian Winter theme, and it was the sort of beautiful ride we hope to see at amusement parks. It's one of Darien Lake's original rides, which we might have guessed if we were trying to tease out park history instead of enjoying it as it is.

And now we got near a pair of roller coasters. Both were ones we had ridden before, at other parks. They were steel coasters with twins in many places. One was the Mind Eraser, yet another iteration of Michigan's Adventure's Thunderhawk and Six Flags Mexico's Batman The Ride and Canada's Wonderland's Flight Deck and Blackpool Pleasure Beach's Infusion and Elitch Garden's Mind Eraser. It's also the Mind Eraser at Six Flags America, in Maryland, which we have yet to visit. It's a decent ride. It's a head-banger. We could put that off.

The other was Tantrum, Darien Lake's newest roller coaster, their big 2018 addition. And we recognized this as Casino Pier's Hydrus, and Canobie Lake Park's Untamed. In this we were wrong. They're all the same model of roller coaster, Gerstlauer's Euro-Fighter. They all start with a vertical climb, us the train going up with passengers on their backs. And a more-than-vertical drop. And then a bunch of loops and helixes and rolls and all that. But the lengths are different. Hydrus is a Euro-Fighter 320, running 1,050 feet, about 320 meters. Untamed is a Euro-Fighter 320+, running about 1,185 feet. (320 meters plus a 41 meter long helix.( Tantrum is a Euro-Fighter 380, running 1,250 feet. They looked about the same, though, while we were on site and without the Internet to look this stuff up.

Still, the resemblance to Hydrus was what impressed us, and we went on that for her 275th roller coaster. The line wasn't anything much, maybe ten or fifteen minutes. Longer than we'd had at Casino Pier, but nothing considering the crowds we were afraid of. We even got to jump ahead a bit. There was that thing where a group of four people all wanted to ride together, but there were only two seats free in the car (which seats only eight people). So her milestone ride was in the back of the two rows of seats. It's a fun ride, dizzying in the good ways. It's a good milestone coaster.

Trivia: The Apollo 11 astronauts were released from quarantine at 9 pm the 10th of August, 1969, a day ahead of the original 21-day quarantine plan. Source: Where No Man Has Gone Before: A History of NASA's Apollo Lunar Expeditions, William David Compton.

Currently Reading: The Astronaut Maker: How One Mysterious Engineer Ran Human Spaceflight For A Generation, Michael Cassutt. So, wait, there's at least four people who became astronauts because, months after not getting picked, they contacted George Abbey to ask if there was anything they could do to make themselves better candidates and he just hired them on the spot? How is this not an irritating inspirational anecdote thrown in the face of every job-seeker ever?

PS: Here's some more wandering around of La Feria, January 2018. 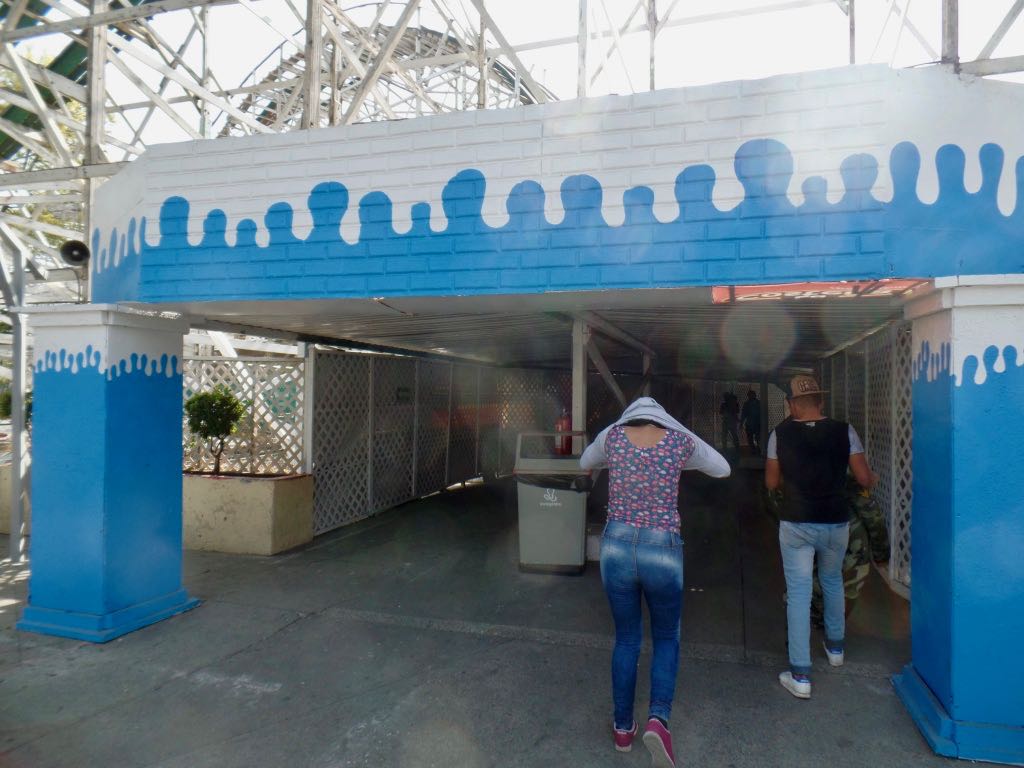 Ducking back through another covered walkway under Montaña Rusa. 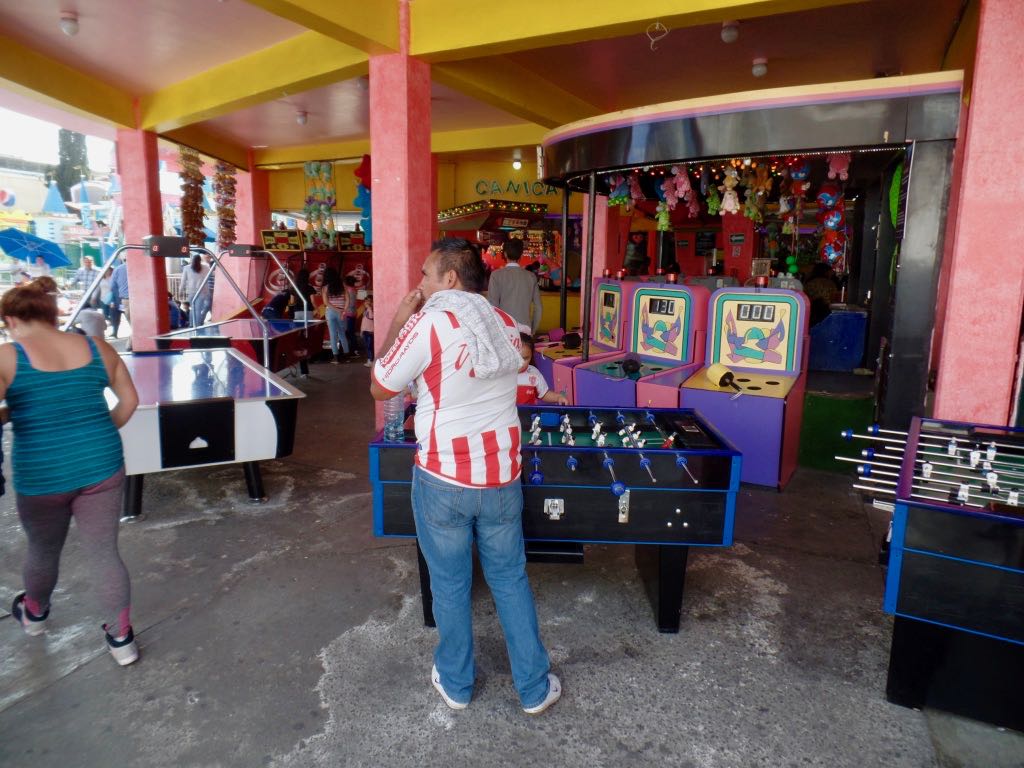 Games! There's some Whac-a-Mole type redemption games as well as a surprising number of foosball tables. Air hockey too seems unusual for an amusement park. 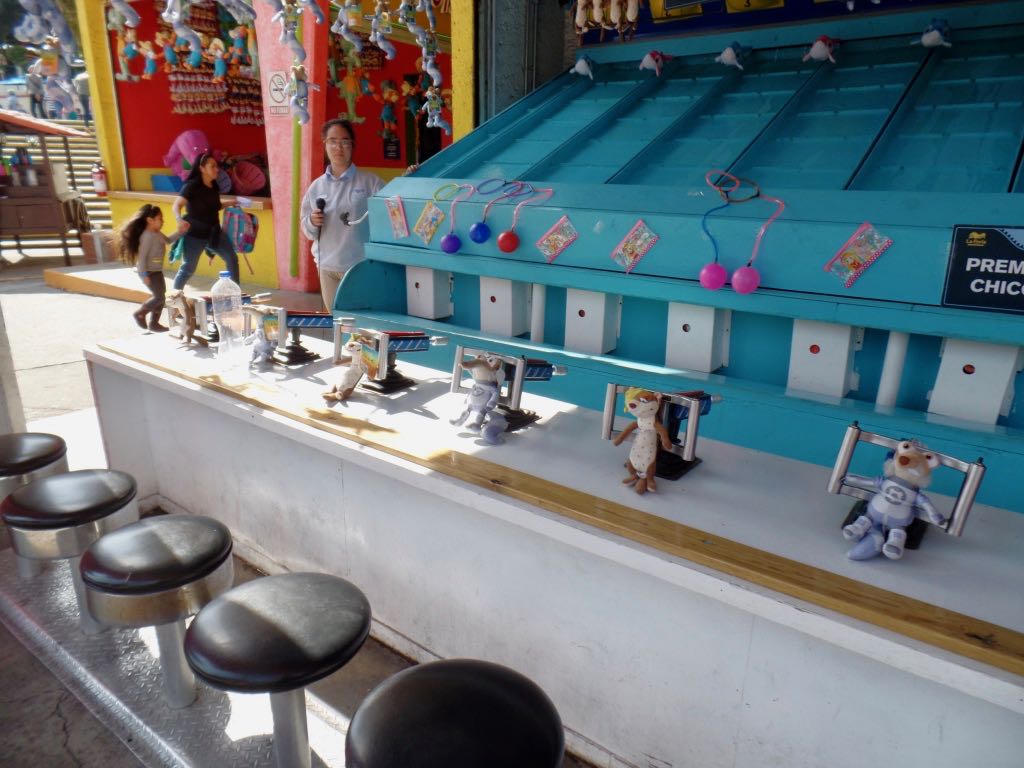 And a competitive water-race game featuring guns decorated with plush Scrat and ... uh ... I don't know but the character looks like some kind of otter with polka-dot nipples? Little help here?