Hail, Pottsylvania, sneaky and crooked through and through

After a bit of celebration and overhearing other people talk about how they liked Tantrum, and our own talking about whether the name was any good, we walked toward the Mind Eraser. This took us past more water, which we studied to see what kind of fish there were, if any. I don't remember that we spotted any. There were a lot of plants in the water, though. It'd be strange if no fish were supported.

Mind Eraser's station had this nice brick cladding, so that it looked better, to me at least, than its twin Thunderhawk at Michigan's Adventure. There was no queue; we got on the next train they dispatched. We went to the back seat. Experience suggests that this ride is less head-bangy if you watch the rows up front and tilt your head to match the ride movement. I also tried, for a change, pressing my head as hard as possible against the padding behind. Between the two, this wasn't too bad a ride. That it was so close to a pond, like Thunderhawk, made it feel eerily more like the Michigan's Adventure experience.

Tantrum and Mind Eraser are off on this little cul-de-sac from the main body of the park. We returned to the main area, spotting a couple interesting things. Like, they have a Fascination Parlor! And it was closed. We would bring the news to MWS, who's missed the game ever since it left Cedar Point. They also have the Giant Wheel, a Ferris wheel, which has a sign declaring ``1982 Worlds [sic] Fair `Worlds [sic] Largest Ferris Wheel','' which is all the explanation you get. But yeah, they brought the Ferris Wheel from the Simpsons World Fair and moved it here. We didn't ride it.

bunny_hugger is not fond of large, slow Ferris wheels and I'm not positive it was actually running anyway. Also the French fries stands where we had a poutine lunch, the first time we actually had poutine on this trip that took us through Canada.

We took a ride on the park's Grande Carousel. It's not an antique. It opened in 1981 and according to the maker's plate comes from International Amusement Devices of Sandusky, Ohio. We have never heard of this organization before. This turns out to be the name that National Amusement Devices, of Dayton, took on in the 70s. As National Amusement Devices they designed and built a lot of miniature train rides, as well as roller coasters. Montaña Rusa is one of theirs. So are Big Dipper and Li'l Dipper at Camden Park, West Virginia, which we hope to get to soon. So was Magic Mountain's Colossus, which you know of as the roller coaster from National Lampoon's Vacation. The carousel, meanwhile, is an average sort of ride, although it's got a cute chariot featuring an image of a woman sitting with a dog. Someone with sidewalk chalk drew a cute picture of a flower underneath a sunny arc by one of the exits. I have no explanation for this phenomenon.

Now, finding the crowds ... not nearly so bad as we feared ... we went to the Ride of Steel. This was, in the park's first Six Flags incarnation, known as Superman: Ride Of Steel, a name they've used at other parks too. When Six Flags sold the park, Darien Lake dropped the trademarked piece from the name and that was apparently it. The ride's off on the end of the park. It's got a couple of lovely Art Deco-style buildings that look like stuff from the Fleischer or DC Animated Universe cartoons. On the side of the gift shop --- Steel City novelties --- you can see the Superman and Batman logos from the building's original theming. And that they were painted over. They haven't been unpainted yet. For a decade plus, this was enough to satisfy Warner Brothers trademark lawyers. It's great. No idea if or when they're going to paint them back into visibility.

Ride of Steel is a hypercoaster. It reaches just over 200 feet high. It's essentially an out-and-back coaster, going off into the undeveloped portions of the park and back again. What stands out, and makes it a lot of fun, is that it goes out along more lakefront property. And it does mostly take nice long stretches with hills. It feels like flying. It would be one of the roller coasters we re-rode.

And that was my 249th roller coaster. There were three roller coasters left in the park. One, Hoot 'N' Holler, is a kiddie coaster, not open to unaccompanied adults. One, Boomerang Coast to Coaster, is another of those shuttle coasters that always leave

bunny_hugger nauseous. And the last was Predator, their lone wooden coaster. So you know my pick for my milestone ride.

Predator opened in 1990. It's gotten some love. The station shows off a plaque from from when Inside Track magazine readers named it the world's ninth-best roller coaster. This was in 1991, but still. When you think how many roller coasters there were, even in 1991, that's an impressive record. The park returns the love: the station also has a plaque saluting Roller Coaster enthusiasts ``for keeping the tradition of great wooden roller coasters alive''. The trains are slightly distant friends: they were bought from Holiday World in 2010. At Holiday World they'd been used on The Voyage. Holiday World replaced the cars --- four years old at that point --- because The Voyage was riding rough. I at least did not know this when we rode.

So. Predator is fun. It's a double-out-and-back design, the track doing just what you'd imagine from that name. It's got a surprisingly small footprint. It's the longest wooden roller coaster in New York. It, too, runs along the edge of the lake and I'm not positive that there aren't footers in the water. It's a bit rough. I'm still happy with it.

And now we had ridden six of the seven available roller coasters at Darien Lake. We had been at the park three and a half hours.

We could take some time to enjoy the rest of the park. For example, we noticed this Paratrooper-type ride. Paratrooper is a ride where your seat hangs from the spokes of a wheel which rotates and inclines. The ride, Haymaker, looked ... different. Bigger, was the obvious difference. It seemed like it went higher than ordinary Paratroopers, but that might reflect the ride's general size. Hard to say. We had to ride it. This was a good use of our time. Apparently, this is the only known installation of this model ride, from Heintz Fahtze. There's also the Silver Bullet, an Enterprise, that appears to be the only model of that ride made by Heintz Fahtze still running. We didn't ride that one, though; maybe if we realized its rarity we would have.

bunny_hugger did grow up playing midway games, and she wanted to join some of the ones going on. So we did. We joined a group of kids playing a Whac-a-Mole game, turning their group from one playing for the small prize to one playing for a medium prize. I hope you don't think worse of me that I beat them all to win a prize. This we chose to be what the game operator described as ``a duck that thinks it's a pineapple''. It is a plush duck, yes, with patterning like a pineapple skin.

bunny_hugger has been intermittently singing ``pineapple duck'' since.

bunny_hugger and I, on our own, played one of those racing games, rolling balls into holes to move a moose(?) forward. This one she won, taking a small prize of a cute little Darien Lake throw pillow. It's what I would have picked myself.

Part of why we played these games was we figured we would go to the main gift shop and look for souvenirs. Then return them to the car. This was more intersting than it deserved to be, partly because so many of the souvenirs hadn't yet been taken over by Six Flags branding. I also grabbed a penny stamp for The Predator and I'm fairly sure I could locate it if asked just now. They also had a build-a-bear-style booth to make your own plush souvenirs, themed to making them superheroes. One of the suggested superhero designs was for raccoons, which you don't often see. Cute.

We took our souvenirs ---

bunny_hugger got a nice light hoodie that's already been great for handling slightly cool temperatures, such as at places with too much air conditioning --- back to my car and marvelled that actually, yeah. The park had gotten every high school student in Western New York arriving at the start of the day, but then only about twelve other people in the park, counting us. This was below the park's capacity. We were having a great day for riding stuff.

We went back in for the last two hours of the park's operating day.

Trivia: On the 25th of July, 1969, a photo technician picked up a film magazine which Aldrin had dropped on the lunar surface and found his hand covered in black lunar dust, the most direct human skin contact with lunar dust. The technician was already in quarantine, but needed to decontaminate by showering for five minutes. Source: Where No Man Has Gone Before: A History of NASA's Apollo Lunar Expeditions, William David Compton.

Currently Reading: The Astronaut Maker: How One Mysterious Engineer Ran Human Spaceflight For A Generation, Michael Cassutt. Wait wait wait wait wait. George Abbey's sister Phyllis died from breast cancer caused by a toxic chemical used in early-70s hair dye? And that it wasn't a surprise, some chemical regarded as safe until women turned up dead. It was something that at the time ``some women were known to react [to] badly'', and the hair salon should have but failed to test it with her before using? What? What is it with this country anyway?

PS: Reading the Comics, July 20, 2019: What Are The Chances Edition, the comic strips I didn't talk about on Tuesday that I should have.

PPS: A roller coaster at La Feria that isn't Montaña Rusa! They have three of those. 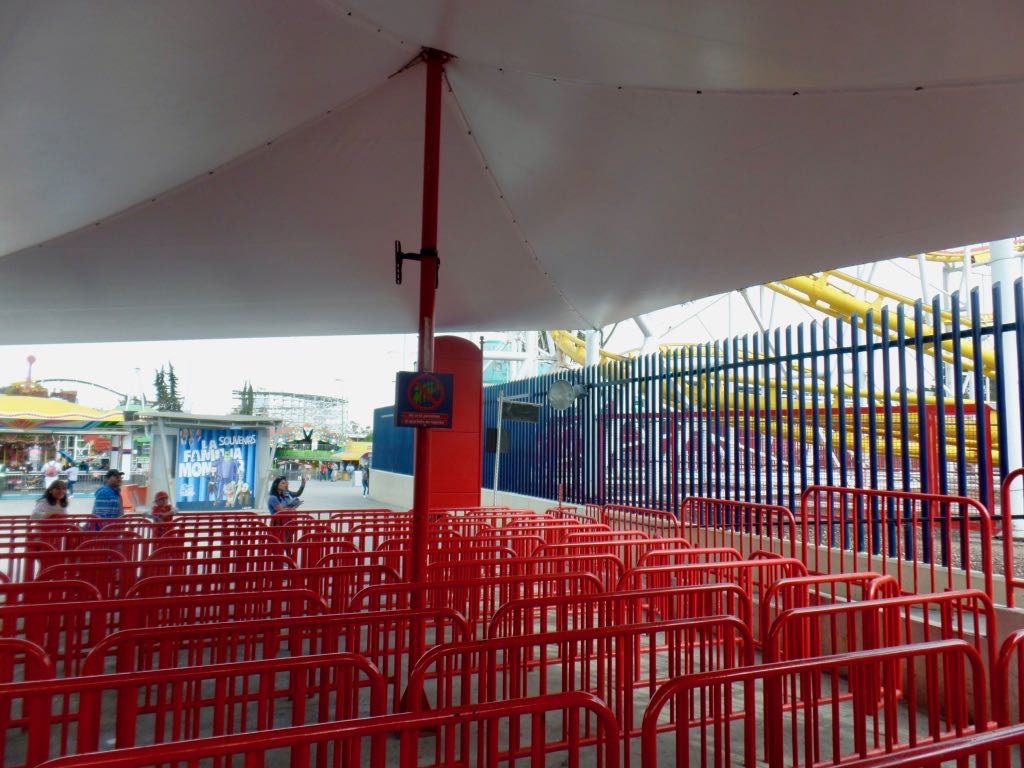 Some of the ample (at least when we visited) queue space for Quimera, which has operated on three continents: as Triple Loop Coaster in a park in Selangor, Malaysia; as Magnum Force in Flamingo Land, England; and here in Mexico City, where it's also been named Montaña Infinitum and Montaña Triple Loop. 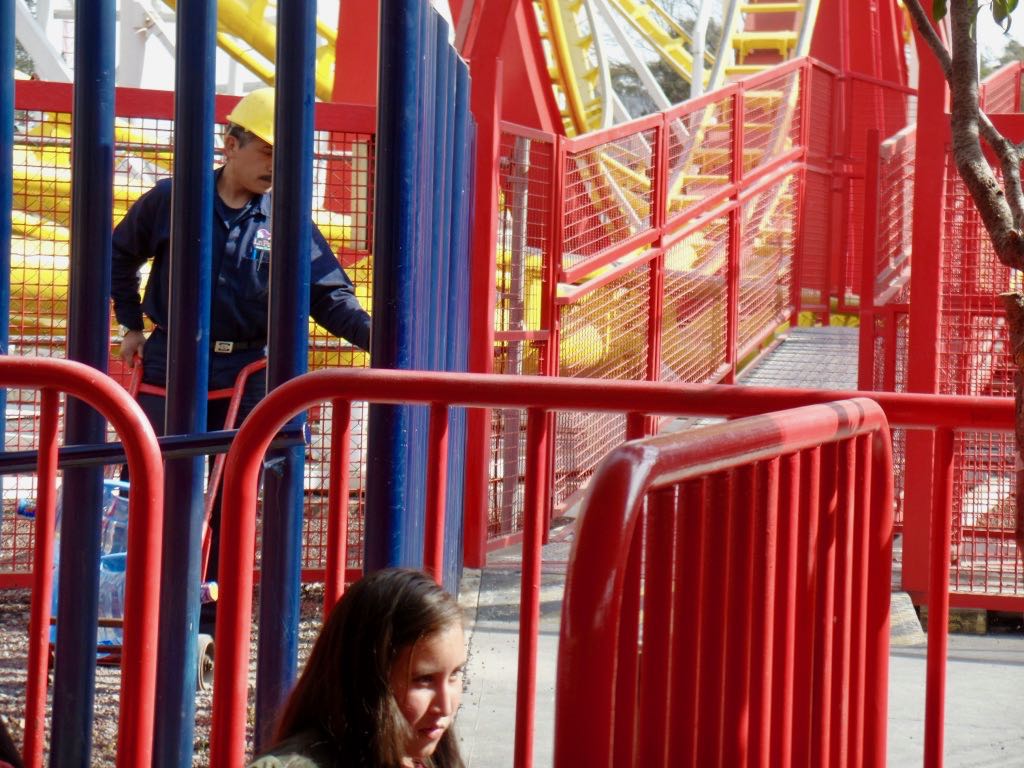 Park employee (we trust) wheeling a bottle of water through the Quimera infield. 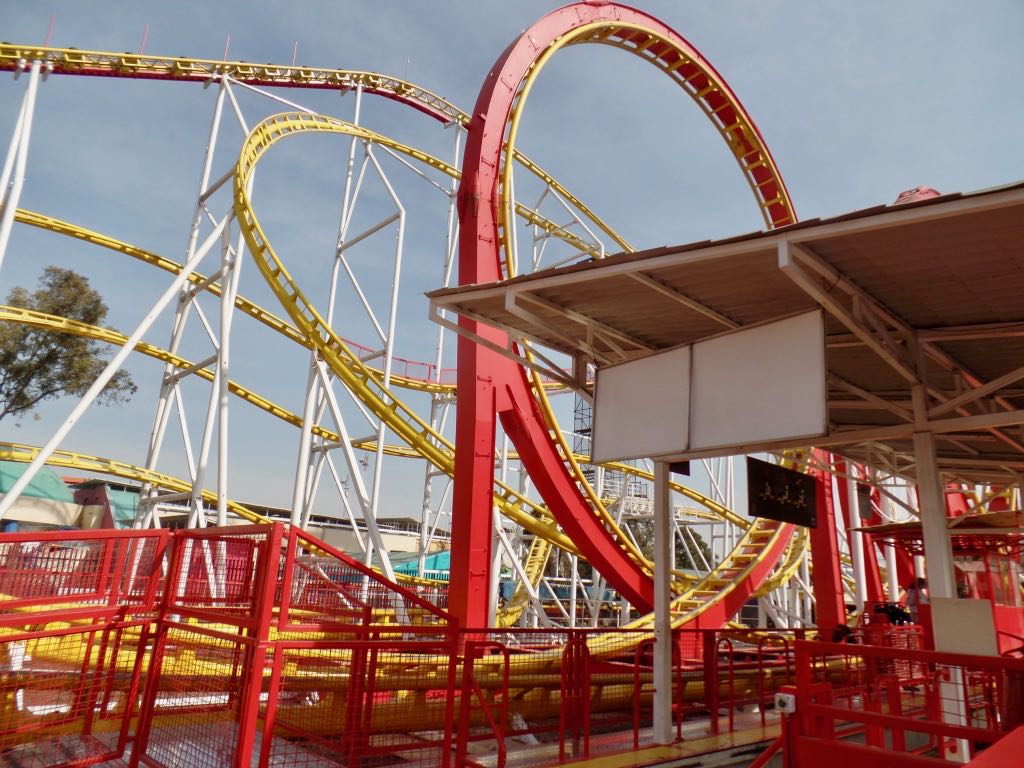 And a look at Quimera, which has three, count 'em, vertical loops and is a model ride --- Dreier Looping --- intended for the travelling fair circuit, if you can imagine that.