Down with the good guys, up with the boss

bunny_hugger nauseated so we left it for the end again. But once more there wasn't much of a queue, and what the heck, if she didn't feel like riding anything more we wouldn't lose much amusement park time. So we rode it, and she had a better time than we expected. She didn't even feel the usual upset.

And we had time left at the park. We walked around, noticing things like that an array of birdhouses near the Beaver Brothers Lakeside Cafe were a lie. They looked like birdhouses but had no actual holes for birds to enter. Why this lie, of all possible ones? We passed a weird open gate encouraging us to Enjoy Your Day At Darien Lake. This, I think, is the boundary between the campgrounds with all the hornets and the amusement park. The Beaver Brothers Cafe advertises how it offers breakfast, at hours way earlier than the park is open. If I have it right, you can just go camping and have an amusement park to walk to once the place is open. Neat prospect. It does mean there's stuff like this which suggest that you're leaving the park without knowing it, though.

We went for another ride on MotoCoaster. And took a ride on the Tin Lizzies ride. The sign labels it ``Test Drive the Tin Lizzy's'' and has a cute vintage-style drawing of a car with ``The Smooth Ride'' underneath. Fun stuff.

We thought we had the time for one last roller coaster ride before something we hoped to do, and we picked Ride of Steel for that. We forgot that Ride of Steel had the longest queues of the day. The ride was worth it, but it meant we had to hustle if we wanted to get where we needed to be by 4:30 ...

When we earlier left the gift shop

bunny_hugger noticed the park's Grande Theatre and cried out something surely rarely cried out. ``The Aaron Radatz Magic show!'' So it said on a small sign promising shows at 2:30 and 4:30 daily. Aaron Radatz was one of the stage magicians who, for years, performed at Cedar Point's Halloweekends shows. I never saw him there: he left around 2008(?), to do magic on a cruise ship.

bunny_hugger and her starter husband went to see his show at Cedar Point every year, though, and she still thought occasionally about this performer that, she supposed, had moved up the stage-magic food chain to cruise ship work. Also, possibly, year-round work, since Halloweekends was only two months of weekend work. On finding he was still there, and still doing shows? She wanted to see, if we could.

We got to the theater moments after the show started. Despite the signs warning no late admissions would be taken, they brought us in, possibly because there were maybe a dozen people in the theater. We can't say Darien Lake was wrong to close at 5 pm, considering. Radatz put on a small show, without any of the big or complicated stunts. But he did put on a show with

bunny_hugger, called up to do a trick where she handed him her distinctive class ring, and he made it vanish and reappear attached to his keyring. He also brought up some of the kids in the small crowd, for similar tricks. And he also gave a quick lesson to everyone on how to do a cute little trick with a rubber band, an illusion where you place the rubber band around your ring and pinky fingers, and make it jump around to your index and middle fingers instead.

The show ran only about fifteen minutes, and Radatz and his assistant stood outside talking with the small crowd.

bunny_hugger talked with him, mentioning his days at Cedar Point. He seemed to remember the time fondly but say that Cedar Point had decided to produce their shows in-house. This changes our idea of his departure to working cruise ships. And he acknowledged that they put on the smallest show possible, because with such a tiny audience bigger stunts just don't fit right. We understood. Teaching is a kind of performance and you just have to present differently when there's only eight people in the class from how you present to a class of eighty, or even just twenty-eight.

We had maybe ten minutes left in the park. We could, if we chose, run to something. The nearest something was the Predator. We went for it. We did not get the last ride of the day, but we got close to it. We could, at the end of our ride, see the last Ride of Steel being dispatched for the day. And we walked around a little, watching the rides close up and the midway games get put to bed, and get a last couple pictures of nice places in the park.

Above the park's exit is a sign reading, ``We Miss You Already!'' It's a nice sentiment.

Trivia: The final, 1921 Treaty of London, reparations demanded by the Allies of German was for about US$33 billion, with Germany committed to pay only about half that amount; the rest would come due only when circumstances permitted. Germany was also given credit for payments in cash or kind already made, including for German railways in territory transferred to Poland. Source: Paris 1919: Six Months That Changed The World, Margaret MacMillan.

PS: let's take some good looks at one of the roller coasters of La Feria. 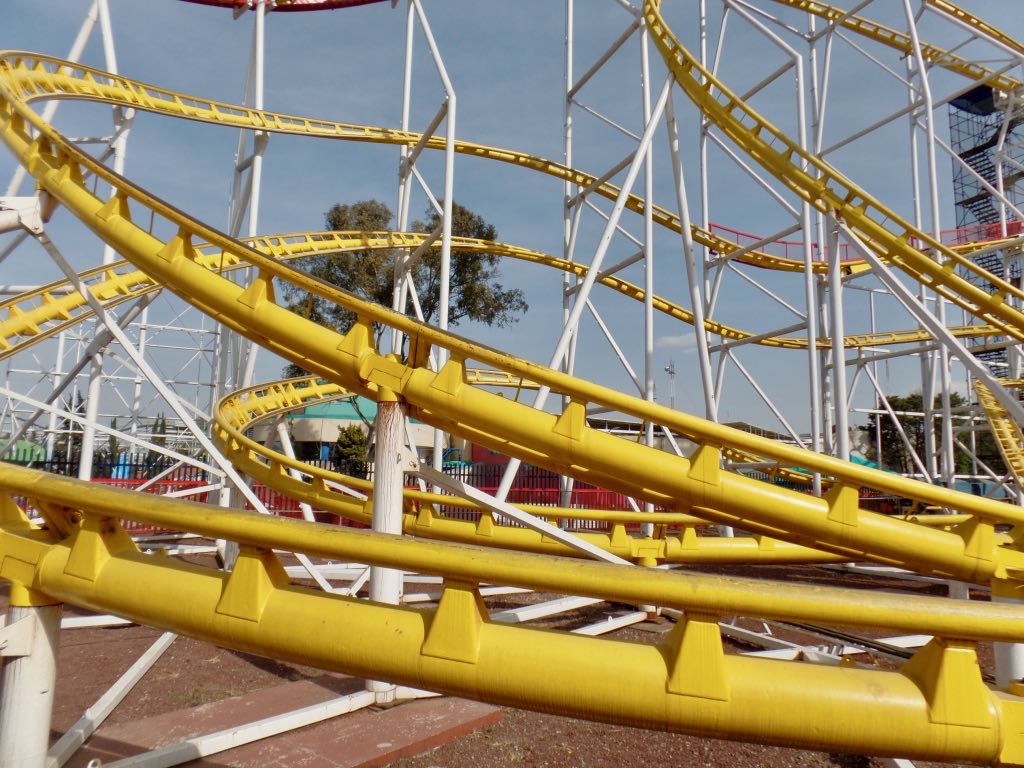 Side view of some of the swooping non-vertical loops of Quimera. 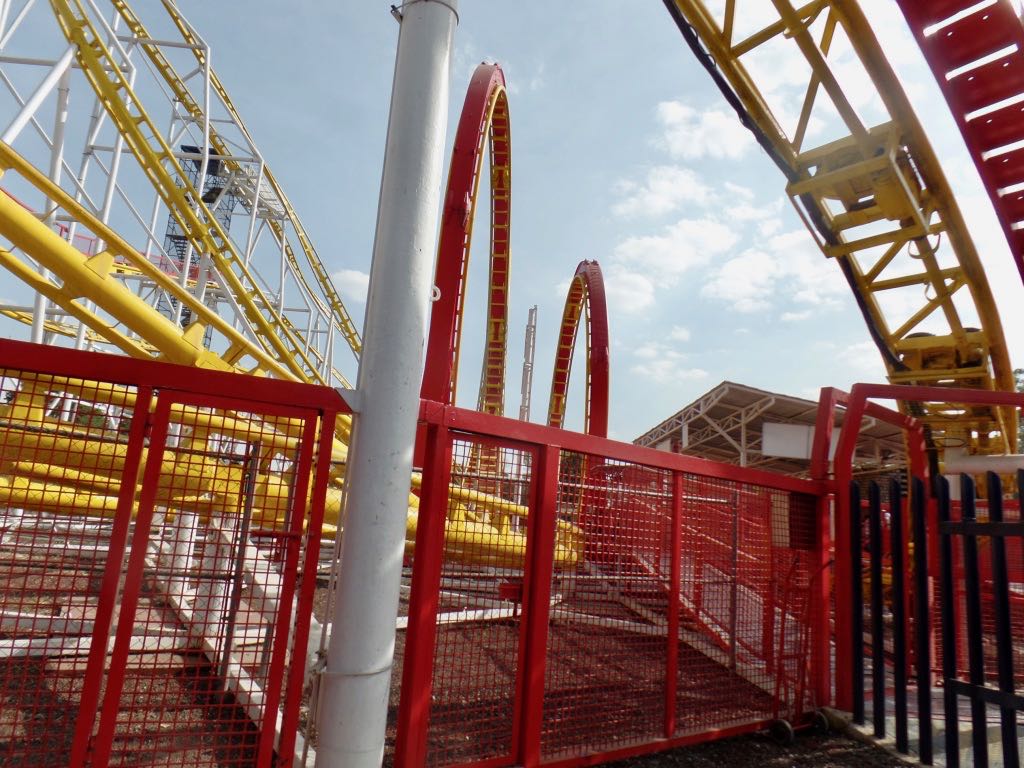 And here, a side view of the three vertical loops from as head-on as you can get. 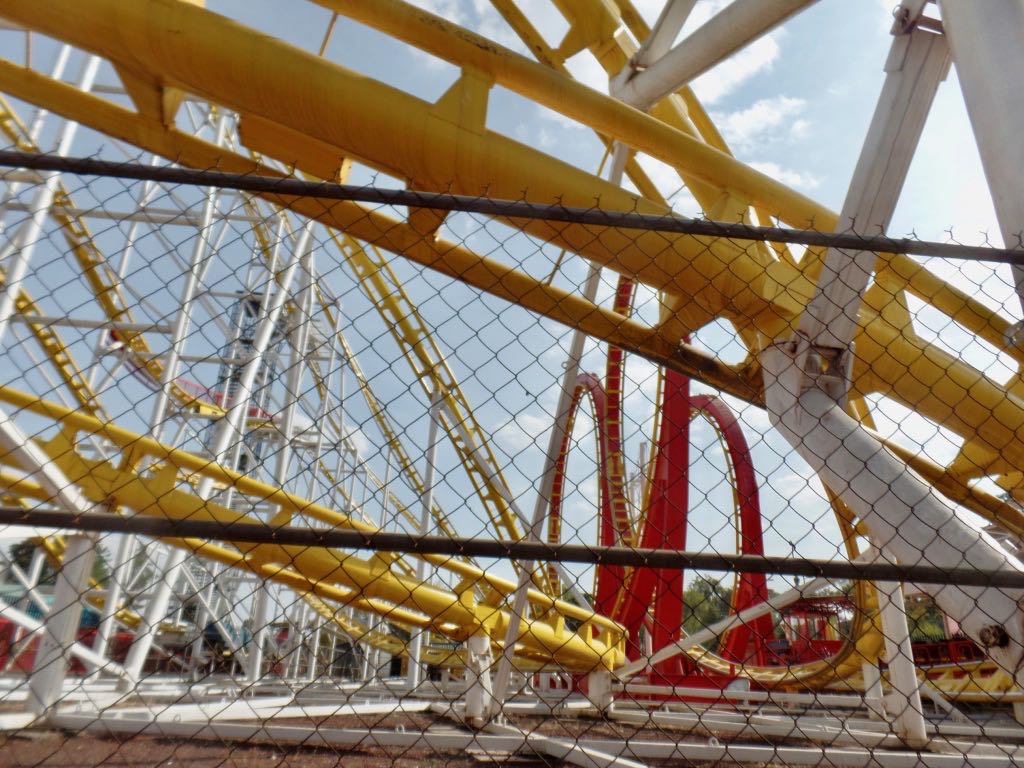 A slightly side view of Quimera's three vertical loops which may be of some help understanding the geometry of them all.