Even leaving the Darien Lake amusement park slowly, though, it wasn't 5:30 yet. The weather was great, the day was for us still young, and we had plenty of energy. So we went to that pinball place

bunny_hugger had found. It was near Buffalo, maybe 45 minutes away.

It's called The Pocketeer Billiards and Sports Bar. It doesn't look like much, from the strip mall outside. Inside, it's got a good dozen pool tables. And something like 75 pinball games. The place hosts a pinball league, too. Also, free pinball on Tuesdays. We were there on a Monday. We'd be occupied Tuesday. The free pinball turns out to be of limited delight anyway: it's just four games that are set on free play, while the rest are the usual charge, from 25 cents to a dollar a play. Their mascot is a cartoon raccoon who, honestly, looks like someone's Sonic the Hedgehog OC from about 1999. It's in the off-centered smirk. I do not know the character's name but if it isn't ``Pocket Raccoon'' they're missing a bet.

So what would we do, but join their pinball league? It's a Selfie league. In this format, you play a slate of games, and take a picture of yourself with your score to establish that you put up that score. To be accepted by the International Flipper Pinball Association, scores put up like this can only be used for seeding for some tournament that has head-to-head play supervised by someone who can make rulings about whether someone's cheating. You may ask what stops a person from just lying about their score. The answer is, you know? If you really want to cheat to get a better seeding than you could earn in a tournament? That's the world you choose to live in. Good luck, pal.

There were six selfie-league games, including two from boutique makers. One was Heighway Pinball's Full Throttle, a racing-themed game that

bunny_hugger understood 8.7 times better than I did, based on our scores in the one game we played. We only put up the one game on that, and the other tables, including moderately familiar ones like Pirates of the Caribbean (Stern's version), Centaur II, or the always baffling Jurassic Park: Lost World. (We've seen Lost World at several venues, and never met anyone who understood what you were supposed to do.) They had the new Black Knight: Sword of Rage, and we put in a couple games on that --- I broke 100 million points for the first time on it --- and they set the table next to Black Knight 2000 and the original Black Knight. Somehow, foolishly, I failed to take a picture of the three games side-by-side.

One of the other selfie-league games was Heighway Pinball's Alien, themed to the Alien and Aliens movies (you can pick, at the start of the game, which movie you're playing the game for). Here

bunny_hugger would feel tragedy. We played a game and I had what sure seemed like a good game, as best we could tell for an unfamiliar table with cryptic rules. But before I could take pictures of the scores, she brushed against the start button and wiped the game out. She felt awful about this, of course, and probably still does. But since it's not like I thought we were going to get to the playoffs anyway, it didn't much matter if we just played again. ... And, it happens, I did better on the second time, in defiance of a lot of pinball tradition.

Finals would be played the 1st of July, well after we got home. It turns out only eleven people put up scores. The eight people who showed up to finals, necessarily, got ranked above us. So that's how I got to be the 448th-highest ranked pinball player in New York State, and

bunny_hugger the 462nd. We never met any of our league-mates and so far as I know, never set eyes on any of them.

Pocketeer had very many pinball games, most of them modern ones. Even in, like, five hours to play we couldn't touch them all. We looked for the oddities. The Pabst Can Crusher, for example. This is a reskin of Whoa Nellie, the breast-themed game. We like the game in principle because it's a modern version of a late-50s electromechanical. Like, the same logic, but the elements rearranged. But, Whoa Nellie is just so gratuitously sexist in its art and its sound effects. Pabst Can Crusher we'd played, once, at the 1up arcade in Denver last year and liked it. But we couldn't hear the sound effects. Here, in the nearly empty Pocketeer, we could. Pabst Can Crusher uses the same layout as Whoa Nellie, but re-themes it to be a bunch of young adults having a beer party in the woods. It is so much more pleasant. If you have the chance to play the table, this is the version to play. (Maybe. There's yet another re-skin, that one themed to the band Primus, which I have never seen and so cannot judge.)

Another rarity they have: the Thunderbirds pinball. This is a new table from the boutique manufacturer Homepin, and it's barely a year old, and I didn't actually know it was in production anywhere. Strangely, I never really watched Thunderbirds (or any Gerry Anderson show) as a kid. I know, you'd think I would love them all. I think I just didn't know when they were on, if they were, when I was a kid. So, I didn't know except in the most vague terms what anything being referred to was. If the game called out a character I had no hope of finding where that character's shot on the playfield was. The game is ... uh ... a bit of a mess, honestly. This is a common problem with a new manufacturer's first games. It's hard to get a shot that feels good. And interesting rules are even harder. You need to think of combinations of shots that feel good and that are doable often enough without ever getting boring. And you need to provide cues, on-screen and in audio clips, that tell people what they should be doing. We played a bunch of games, since the table kept giving us free credits, and never felt like we were getting closer to understanding what we were doing or why. We did work out there was a ramp shot that seemed quite important; we never figured out how to shoot it reliably, though.

Another rarity that we did understand slightly better was Pistol Poker. This is a mid-90s game from Alvin G and Company, the company formed out of the remains of the venerable Gottleib company. (Guess the relationship of Alvin G to pinball icon David Gottleib.) They only made a few tables, in short production runs, before collapsing themselves. It's one of the estimated 800 million billion trillion card-themed games, although this one crosses it with an Old West theme. Possibly they were figuring, hey, there's a Maverick movie coming out around this time, we don't need to license comedy-western-cards. And we had some good fun with this. The rules are a bit obscure and none of the modes have quite the right balance of good shots to make and time to make them in, but, that could be said about every 1990s Gottleib table. We played this while having a dinner of a bunch of fried vegetables from the bar.

While we were there the Pocketeer staff rolled out a game, Last Action Hero. This is a mid-90s game, licensed to the movie, and I've always heard positive things about it. We've played it, like, once ever, at an AJR tournament years ago. I didn't want to leave before playing it. And while doing this we had about the only time we talked with someone besides one of the bartenders. It was a guy very eager to mansplain pinball to

bunny_hugger, at least until I was done with my ball and he could switch to telling me about pinball. His enthusiasm was infectious, at least, but he wasn't actually, you know, right about what he was saying. I was playing a game while he explained to

bunny_hugger that Stern Pinball made the Houdini: Master of Mystery game. Houdini was made by the boutique/small manufacturer American Pinball. It's one of those errors that is inconsequential but lethal to someone's sense of being an authority. So I could not see her face, but I know what she looked like while he said this, and also how he went on talking without realizing that

bunny_hugger was not there for me, but because she knows and appreciates pinball in her own right. When his attention switched from her to me, I kept thinking, I need to point out that

bunny_hugger has played in the Women's World Championships. I couldn't find a way, and I should have. I have trouble wedging my own topics into a conversation, especially against someone with a faster line than I have.

That guy eventually left to ... something. And we were getting late enough that we should get back to the hotel. We went back to the Black Knight games to close out the night, where I had that great Black Knight: Sword of Rage game. And then on Black Knight 2000, which

bunny_hugger has played only a few times without ever having a really good game on? She had a really good game. Well, a really good third ball, that took her from demoralizingly far back to soundly beating what was one of my best recorded scores on the game. I'm sorry that Explainer Guy wasn't there to see it.

We drove back from the Buffalo area to our last night in a Bavaria, New York hotel. The next day, we'd be going to ... a Buffalo-area hotel.

Trivia: The Royal Philatelic Collection's set of stamps issued during King George V's reign are kept in 328 red albums. Those of George VI's reign are kept in more than a hundred blue boxes. Source: The One-Cent Magenta: Inside the Quest to Own the Most Valuable Stamp in the World, James Barron. 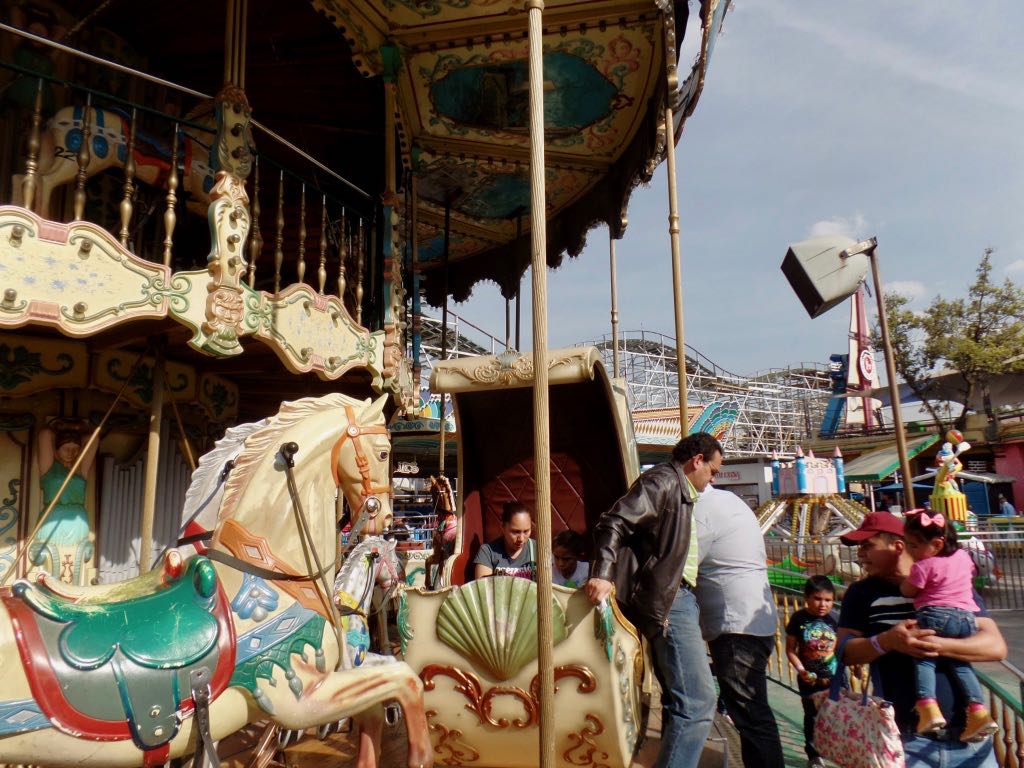 Getting onto the carousel at La Feria, and showing off the rocking chariot it has. 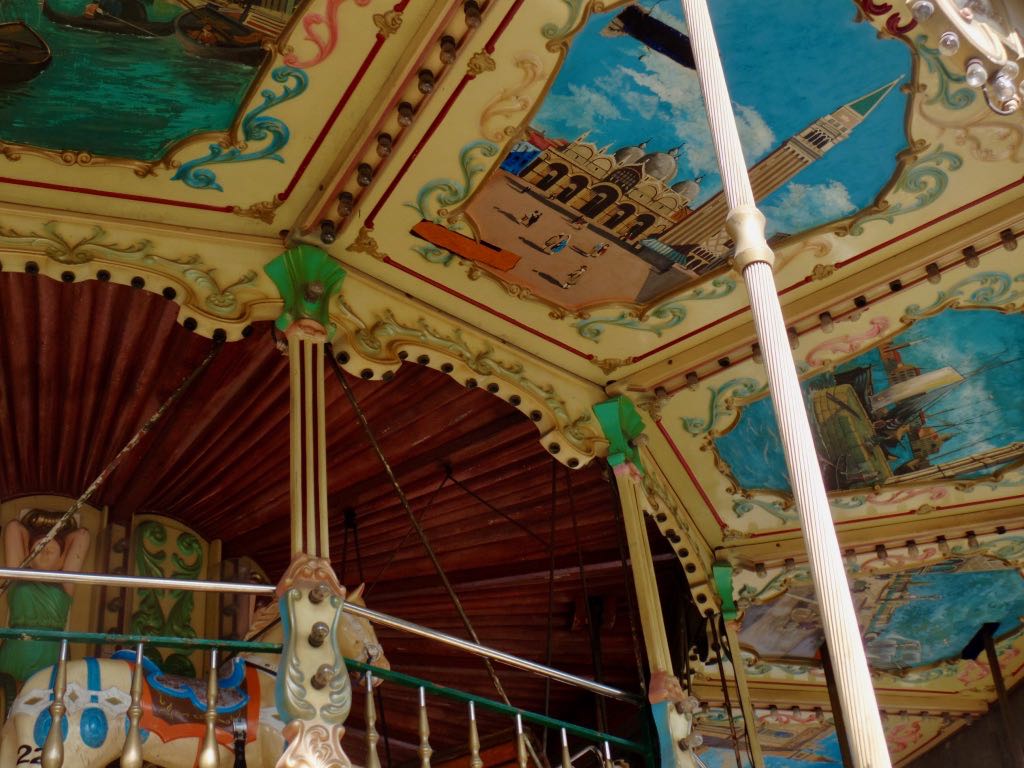 Looking up at scenery panels on the carousel. These always seem to be custom to the location. 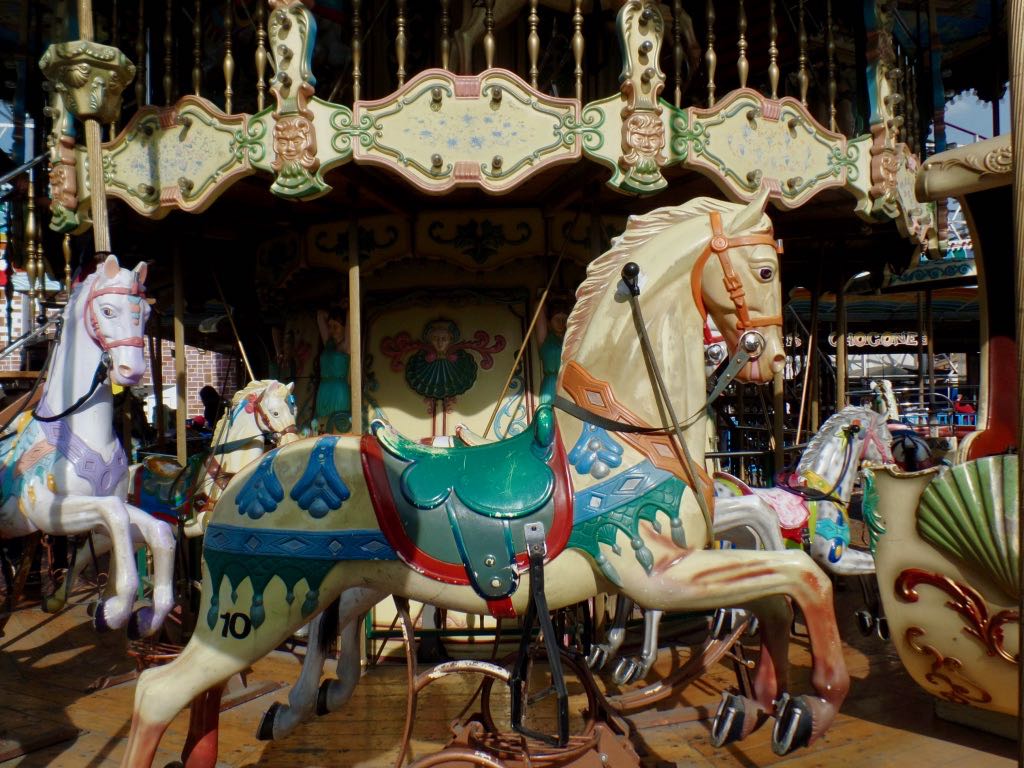 Horse number 10 in a pose that's great except for the shadow of one of the lights.