Besides the Allen Herschell Factory Museum

bunny_hugger thought we might spend an evening at Niagara Falls. And this implied getting a hotel room near Niagara Falls. She picked the Moonlite Motel, your classic rectangular-style motel with a pond in the center and a great neon sign and a parking lot you get to underneath an overhang, like you might see in a 1960s postcard about motels. The manager was a pleasantly slightly gruff old guy, telling us about when the continental breakfast would be the next morning and offering eventually coupons for the hotel shuttle down near the bridge.

Despite the coupon we ended up driving into town. We weren't sure how long we'd spend touring things. Instead we drove in to Ontario, giving our passports their third use in the long weekend.

bunny_hugger loved past visits to the ``ticky-tacky'' tourist-strip district of Niagara Falls, Ontario. I had ... been to the American side, in a July 2008 trip with my parents and one aunt, but my aunt unaccountably forgot her passport and so we stuck to the New York side of things. This was my first chance to see the spectacle.

It's great, though. It has the feel of a Jersey Shore tourist strip. There's lots of great comic architecture, such as the Ripley's Believe It Or Not building, modeled to look like a toppled Empire State Building. There's a Burger King with a gigantic figure of Frankenstein's Monster eating a Whopper. According to a coupon book they're putting in a roller coaster atop that building. There's haunted houses, mirror mazes, miniature golf, a giant Ferris wheel. And this all besides the Falls.

We looked for dinner ... well, at a bunch of places, including a promising-looking family restaurant that was expecting a huge crowd and couldn't take us. We ate instead at a small place with Mediterranean wraps and sat on the sidewalk, watching the spectacle. Later, they gave us the number code to use their bathrooms, which didn't work, and in making our best guesses about how we heard it wrong the system locked us out entirely. I hope they got that sorted out.

Since we needed a bathroom I had my good idea for the night: that there'd probably be one near the viewing area for the Falls. This was a correct guess. And this gave us the chance to see the Falls, from the Canadian side, in the full glory of late-afternoon light. We saw a rainbow in the American falls. And the always-amazing spectacle of birds in flight but far below our eye level. I got lost in thoughts of Deep Time. Like, there's Luna Island, separating the American Falls from the small Bridal Veil Falls. Was Luna Island ever underneath the waters of the Niagara River? I stared at cliff face, trying to imagine the most recent day that water poured over, carving this edge. Or to imagine the next day. If that wasn't enough I got caught up in smaller thoughts. Like, think of the animals that live near this. Wouldn't they imagine that every animal lives near something like that? There might be, say, a rabbit warren only hundreds of feet from these falls. Do the rabbits have any understanding of what is near there? Do they even know it as anything besides a curious sound and steady vibration in the ground? Do they imagine what it would be to live without that ?

It's too much to watch, for too long. We went back to the frothy silly light stuff. From the many miniature golf courses we went to the outdoor Dinosaur Adventure Golf.

bunny_hugger knew she had played a dinosaur-themed miniature golf in Niagara Falls in the past, and kept feeling torn between things she thought she recognized and things she did not. She did see some dinosaur sculptures that she recognized, and yet was frustrated that they didn't look right, such as, were laid down instead of standing up. I won the course, by two strokes, although it must be said that there were two holes on which I putted inadequately fast, and my ball rolled back, stopping when it hit my foot. Since it didn't go out of bounds, I didn't take a stroke penalty for that, but if I had gotten out of the way sooner, it would've gone out of bounds both times.

One of our destinations was the Great Canadian Midway, which had an interactive dark ride that was fun to play.

bunny_hugger even hit things; I may have rung up a score of zero. We had hopes that we'd find pinball here, and indeed, in this large arcade we did. One table. The Stern Star Trek. We didn't have any tokens. The game did have one credit, and

bunny_hugger played it and did tolerably well for a table she was touching for the first time. (She knows the rules well, but every table plays different.)

We got ice cream, and ate it in the warm evening twilight, listening to the karaoke bar across the street. And then heard fireworks going on, down at the Falls. We walked back down that way, arriving just too late to see any of the fireworks. But we could see the smoke lingering from them, illuminated by the colored lights that shine on the Falls at night. We watched that a good while, until the smoke cleared, and then watched the light on the Falls.

We poked around some of the gift shops, never quite finding something appealing. We did go back near the place we'd eaten, because there was an appealing-looking mirror maze. Really we were there for the animatronics, which included a vulture and a digging rat outside. Our experience with mirror mazes has been that they're pretty easily navigated by the technique of looking where you're going.

These Crystal Caves worked differently. Notably, they had us put plastic gloves on first. This meant there were almost no smudges on any of the mirrors. The lights are lower, too, and the maze much bigger than any we'd been at before. We also had the maze to ourselves. So we got lot, like, around eighty times before we got down to some serious progress. Have to say, this was a great mirror maze. Well-designed, easy to get lost in, and so clean that we kept losing track of the correct path to each other. Very much worth the cost of admission.

Meanwhile I had repented of my decision not to play the Star Trek pinball earlier, and suggested we go back to the Midway. Mostly I realized, you know, I've only played pinball in three different countries (the United States, Singapore, and France); why was I turning down a fourth? We'd probably need credits, and I stopped at a change machine that was just there in the street that gave me Canadian quarters for a US dollar, the only act of currency exchange we did on this trip. The pinball machine didn't take quarters. I bought, inside the arcade, tokens with another of my US dollars.

And for my first game on this table I had ... uh ... a riotously good game. Like, pinball players sometimes have the experience of a game where you just can't lose the ball. This was one of them. I got to the first wizard mode, the Kobayashi Maru scenario, in one ball. I've been to that mode, like, twice before in the five years this game has been out. To have it this fast was ridiculous. I even had flukes that worked out for me; at one point the game tossed an extra ball into play and I kept that going a good while, without losing control of things. Meanwhile

bunny_hugger fumed and demanded to know why I was so good.

I ended up putting up 172 million points, which I think is the second-highest I've ever done on a 2013 Star Trek. I did not get on the high score table.

bunny_hugger regards this as an injustice.

It was near enough midnight. We decided it was time to get to bed. We would have missed the last shuttle bus, had we taken that. The customs officer asked how long we had been in Canada and I at least was amused to say it was about six hours. Were we bringing anything into the United States? ... And we realized, huh. No, we hadn't bought any souvenirs of a place designed to sell souvenirs. Weird.

By the time we got back to our Moonlite Motel, the neon lights were off. Check-in was only allowed until midnight. We suppose they had turned the sign off when there was nobody at the front desk any longer. That's a shame. It was probably a fantastic view.

Trivia: The first operating losses of the Panama Canal Company, after its opening, were recorded in 1973. 1974 saw the first toll hike for the canal, from 90 cents per cargo ton to $1.08. Source: The Path Between The Seas: The Creation of the Panama Canal, 1870 - 1914, David McCullough.

PS: OK, now that's enough of some of these roller coasters. 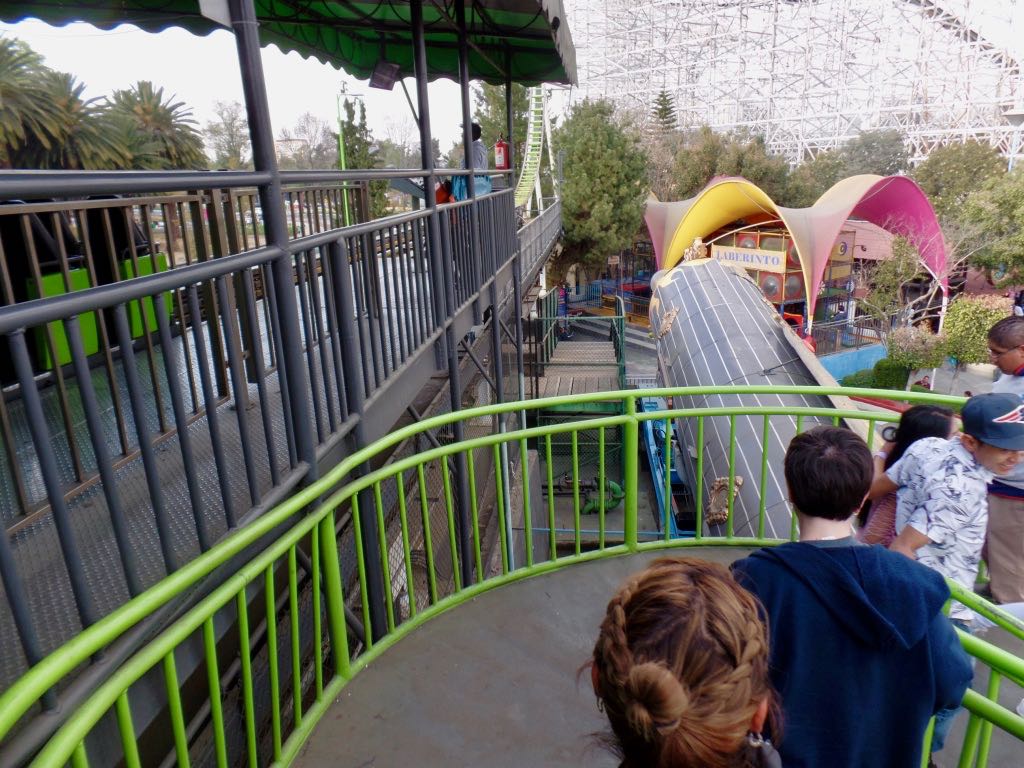 A view from the exit of Cascabel 2.0. And say, what's that big cylindrical thing in the center there? 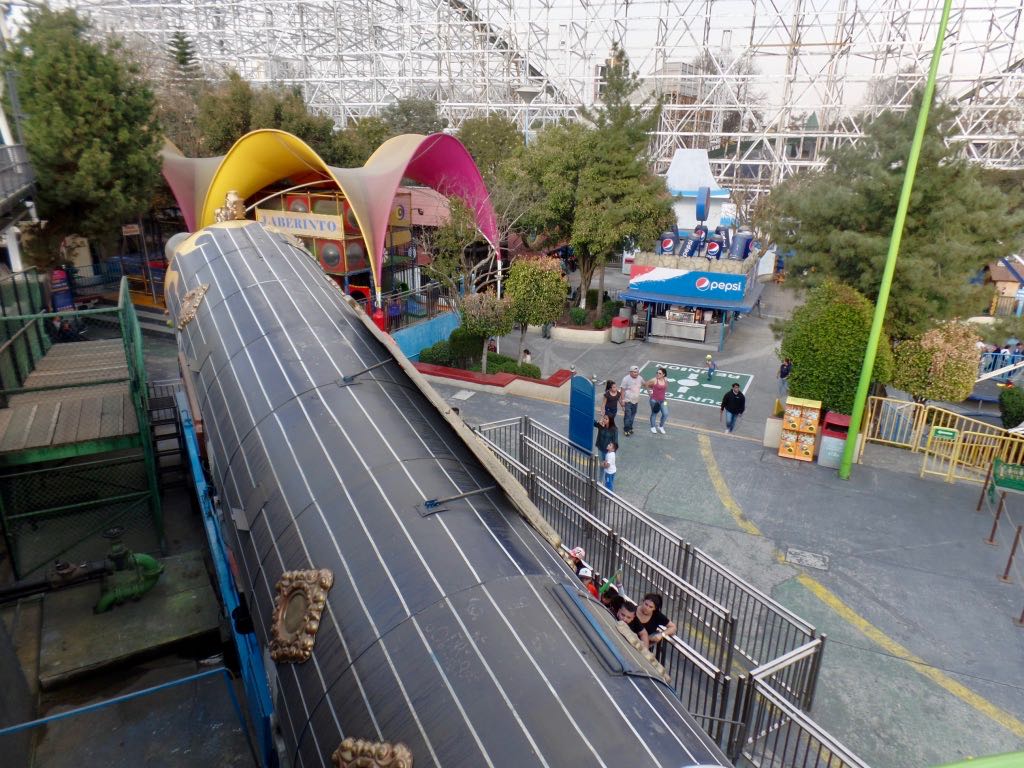 Yeah, that. What's that thing? Also, hey, notice that Meeting Point over in front of the Pepsi stand. That's a nice thing to have and be so visible from that far off. 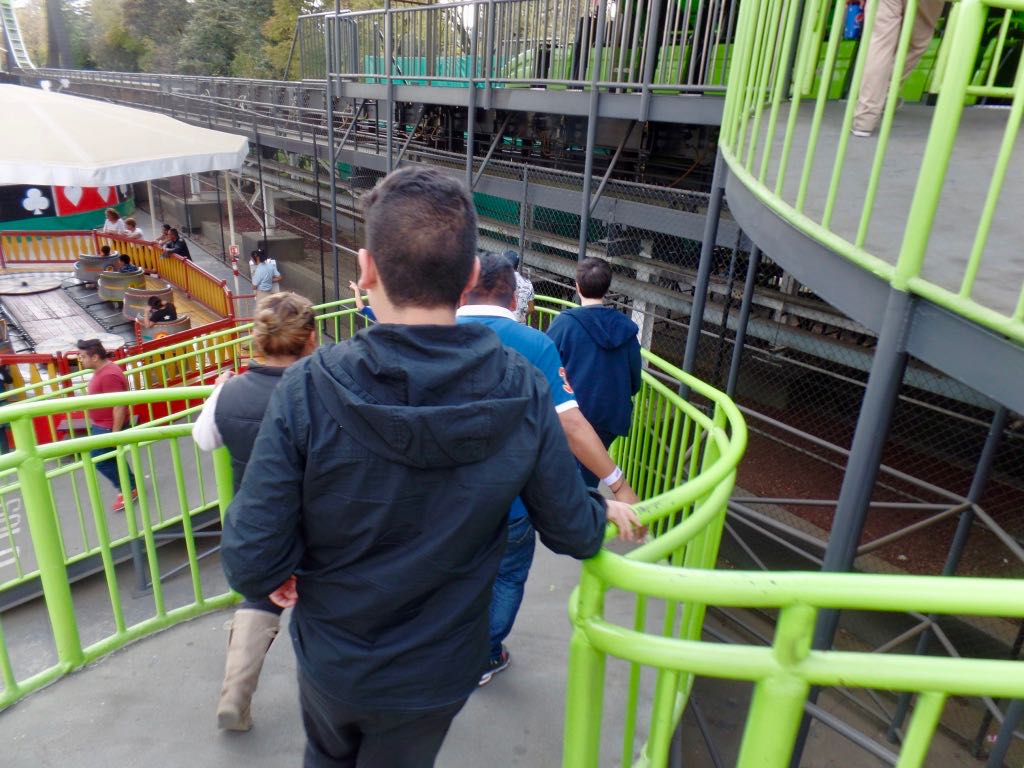 Walking down from Cascabel 2.0, a nicely twisty path, with a view of the Kiddie Whip beside the roller coaster.