But chilly, chilly is the evening time

Our next big important event was our anniversary. This we observed on the 29th of July, for the reasons you would imagine: there was a pinball thing the 30th. That was pinball stuff in Fremont, two high-valued tournaments in which I did better than

bunny_hugger and she complained that I'm better than her at pinball.

We chose something simple and low-key for our anniversary, with an evening at Kokomo's Family Entertainment Center. It would let us ride a roller coaster and play miniature golf and get sushi, and it wouldn't need more than a bit over an hour's drive to get there or back again. Plus, it was prepaid: we still had our Kokomo's cards from my birthday expedition last year, when we went to find out that the roller coaster was closed. The signs still say that whatever activities you buy are good for that day, but no, the credits don't expire. We called before setting out to make sure the roller coaster was running. It was a sunny and fairly warm day, but we won't forget our hard-won lesson until, oh, September.

A small disappointment is that Chad, their fortune-telling mechanical parrot, is gone and has not been replaced with a new instance. Chad lives in in two ways, one as the cartoon mascot of the park. The other is as the mechanism. The bar(?) in Indiana that bought Chad has got it running again, and even sometimes posts an update to Kokomo's Facebook page with pictures of the machine in operation. The fortune-telling parrot mascot of a family entertainment center near Saginaw must be a big draw to a Southern Indiana bar crowd.

We played our usual round of miniature golf, as ever fascinated by and trying to understand the weirdness of the course. On so many of its greens there are multiple holes, all but one (or two) covered with rocks. Or other rocks covering, like, disused tunnels. If any miniature golf course has ever deserved an oral history this one does. We tried to admire it without holding up too much the group behind us. That group included an estimated 380 children, or at least seemed like it, and they somehow were rushing through holes instead of getting lost hitting balls and each other with sticks.

Still, this brought us to an extraordinary moment. My miniature golf game is a conservative one. I don't ever play bold. I play for getting to a better position than I already had, and that gives me about twelve good holes, three okay ones, and three fiascos in a typical round. Here, deep into the course, I saw how the 1800 kids behind us were eager to overrun us, so I just took a good swing, tapped the ball in roughly the right direction, leaned down to pick up my pop, and got the news from

bunny_hugger that I had hit a hole-in-one and annoyed her by being better than her at miniature golf. I never hit a hole-in-one. I think this is the first time I've hit a hole-in-one at all at the Kokomo's course. Wow. ... And then, at the 19th hole, I took a similarly casual, distracted swing and hit the hole for a free game. I'd wondered how they would credit this on the new swipe card system. It turns out --- you can check the contents of your card --- they added it as 'credit one game miniature golf', or the equivalent. The stuff we'd bought earlier had been listed as five instances of 'any one charge attraction', or the equivalent. So that's great, although it does mean next time we visit

bunny_hugger and I will be out of synch in our events, at least until she wins a free golf game.

If Kokomo's has one shortcoming it's that the arcade doesn't have pinball. Or other games that really appeal to us personally. We did play a game of air hockey that went so long that the table turned off with us tied at, I think, five all. Hm.

We did get in three rides on the Serpent roller coaster, one right when we started, and one after dinner. We also wanted one in the night, but as twilight set in we got nervous. Were they still staffing the roller coaster? We didn't see anybody there, and we didn't see any people going over there. So when we finally lost our nerve we went over, and a staffer followed. A night ride on Serpent is great, even given that there is not a blanket of amusement park rides around it. Riding up that high in the night, so near corn fields, is also great. Twilight, though? That's also fascinating, and I think it's the first time we've ridden at that time of night.

In the night we got ice cream cones and sat down near one of the miniature golf water features. There we heard a frog, and we looked around until we saw it. He was a small fellow, apparently king of the pond, and congratulations to him for that. We didn't see him attract any interest from female frogs, though, or anyone else. He just sat there, on the side of a rock, his throat sac ballooning out and back again for a long while, until we both looked away a second and then he was on the other side of the pond. This was a good reason, to us, to head back home now rather than sometime else.

This was our seventh anniversary, and we hope for so many more.

PS: And some more secrets of La Feria! The pictures they ordered us not to take! 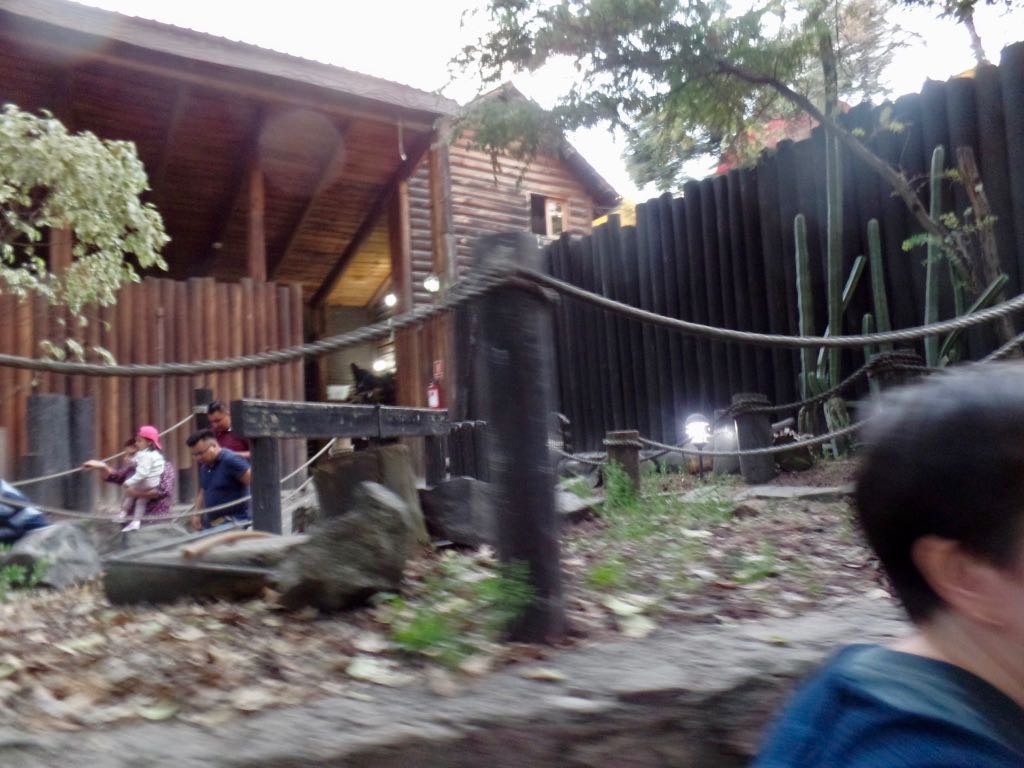 Oh, so what was inside that strange Cabaña Chueca? It's a Mystery Spot house, all the rooms and paths at weird twisted angles. 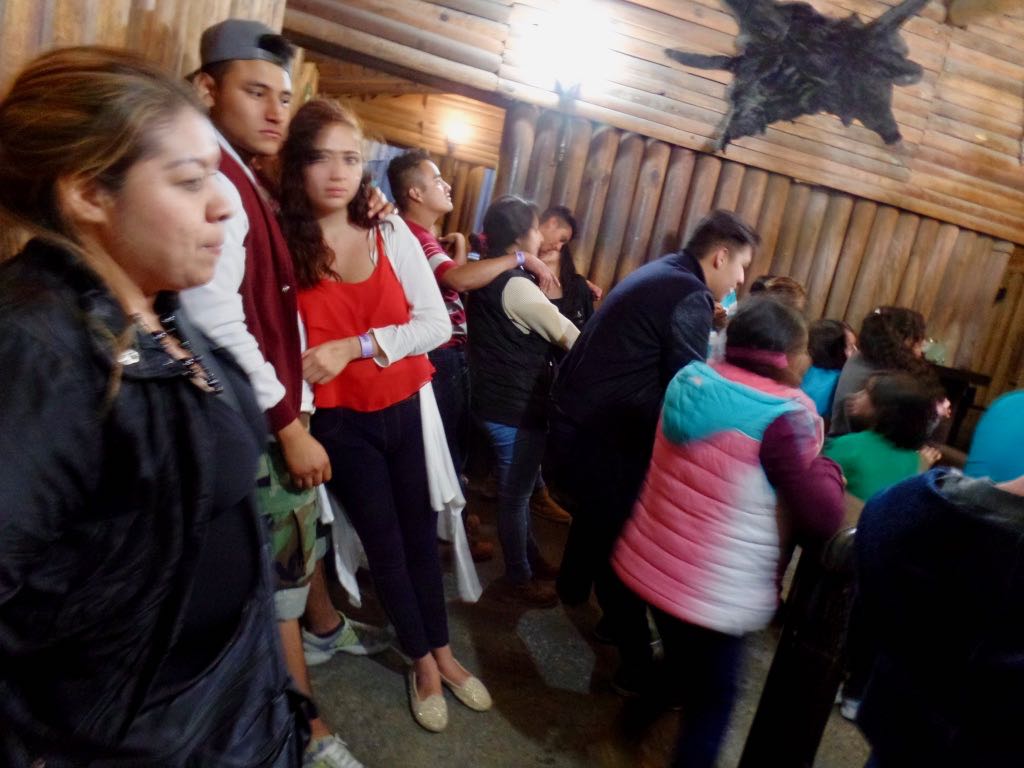 I suppose it's not really possible to convey what a mystery house looks like in a picture that can be oriented any old way, but this maybe gets at it. Bonus: it turned out there was a sign outside saying to not take pictures inside, so, see if you can spot the person who was aware of the rule I did not know I was breaking. 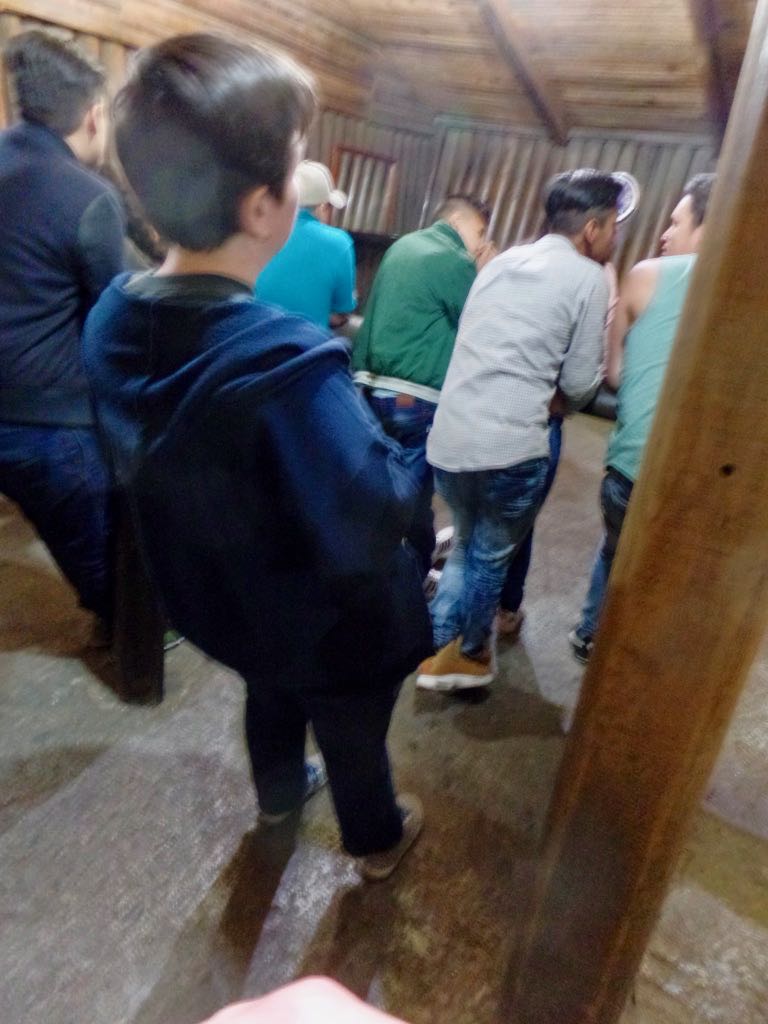 bunny_hugger showing off her mastery over gravity.