I saw above me an endless skyway

If anything dominated the early part of this summer it was rain. I haven't checked the weather records but I believe Lansing had 64 days of rain in June. It dried up a bit in mid-July, but early July was still wet. So while we had the traditional plans to visit

bunny_hugger's parents the 3rd of July, and watch the Albion city fireworks, I also thought there was a high chance they'd get rained out.

They were not. Not exactly.

bunny_hugger, her father, and I set up at our usual riverbank position. This year we brought lawn chairs for more comfortable sitting. Her mother stayed home, for fear the long wait in the outdoors would be more than she could take. Also to be near their very nervous basset hound when she started barking at the fireworks. We got there nearly 45 minutes before the fireworks were to start. As 10:00 --- sunset, finally --- rolled around I saw heat lightning and supposed that was it, the show was off. And yet ... no announcements were made. Nor did any fireworks go off. The night just continued in this holding pattern. Many people gave up and left. By about 10:20 I was ready to move that we declare the fireworks show had been cancelled when the first fireworks started. We don't know why the fireworks show started maybe twenty minutes late. But my guess is that with lightning strikes in visual range they had to hold and see what the weather would do.

What the weather would do is rain, pretty heavily. This started about 10:30. No lightning. But it's hard to not notice that had they started the show on time, the grand finale would have come before the rain did and there wouldn't have been a mad dash of people away. The bright side of this was that when the show did leave, and the rain settled down again, it was easy to get out form the park. Only a few hardcore people were left.

We had done typical things with

bunny_hugger's parents. Trying out the next chapter of Mice and Mystics, for example, where we had one of those sessions where we were using our various powers and special magic things well for a change.

bunny_hugger's father made ice cream sundaes and this time promised that he would not microwave the ice cream. He always microwaves the ice cream, on the grounds that it's too hard to enjoy when it's frozen. Oh, and they announced they were buying a car.

So they've had this Honda CRV for about eight thousand years now, and the mechanic said that it was no longer safe to drive. According to

bunny_hugger's father, the thing was one big pothole away from catastrophic failure. I do not know how much of this was exaggeration useful in spurring action. But it made driving his car to the fireworks show more exciting than it would otherwise be. And it made us respond to his plans to drive to Kalamazoo the next day with disbelief. Well, he had a dentist's appointment and it's not like you can get a taxi or public transport from one city to another, not in the United States. He survived that, anyway. They've gotten a brand-new car, this despite

bunny_hugger and her mother and I pointing out, in our separate ways, that a certified-used would be a much more economical and no less good choice. Also a big car, which her father is justifying on among other grounds that we could use it to move pinball machines. Mind, in the last five years, we've needed to move one (1) pinball machine, one (1) time. I would not consider that a major factor in car-buying. But being able to fit a table is one of the things

bunny_hugger is looking for in her next car.

Trivia: Michigan Territorial governor William Hull, in 1812, tried to refuse President James Madison's naming him Brigadier General and leading the invasion of Upper Canada from Detroit. Source: Union 1812: The Americans Who Fought the Second War of Independence, A J Langguth.

PS: No, I don't have an endless series of pictures of La Feria. You know that something like this eventually has to come ... 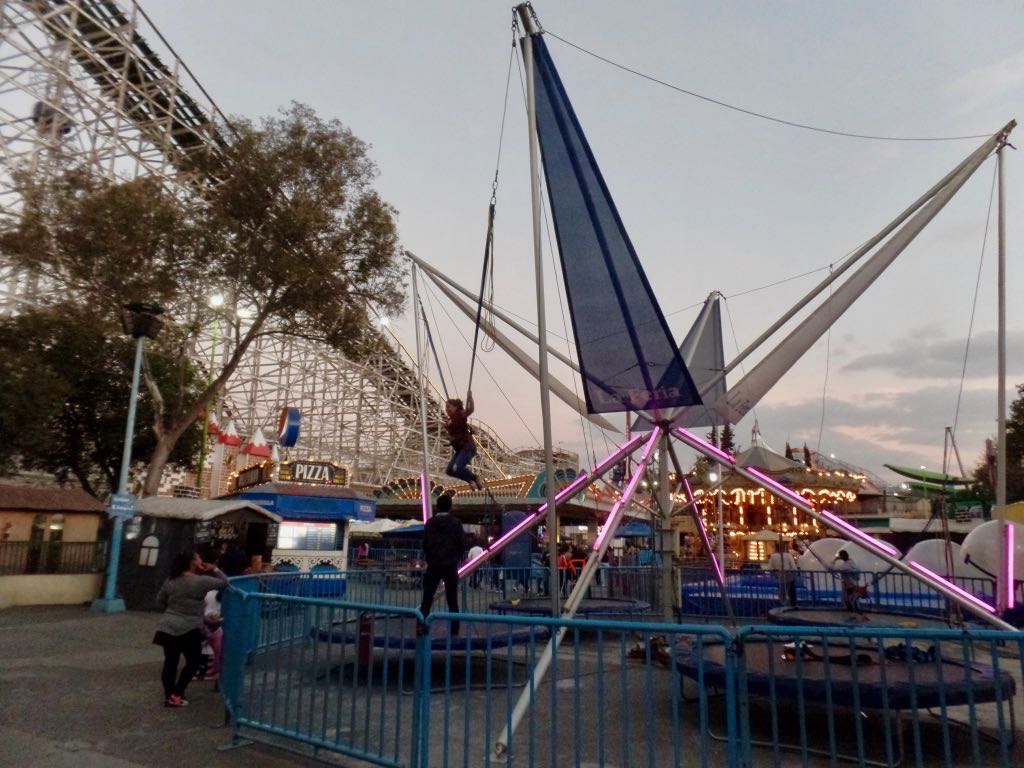 Night sets in at La Feria. Here's lights turned on to the reverge bungee ride. 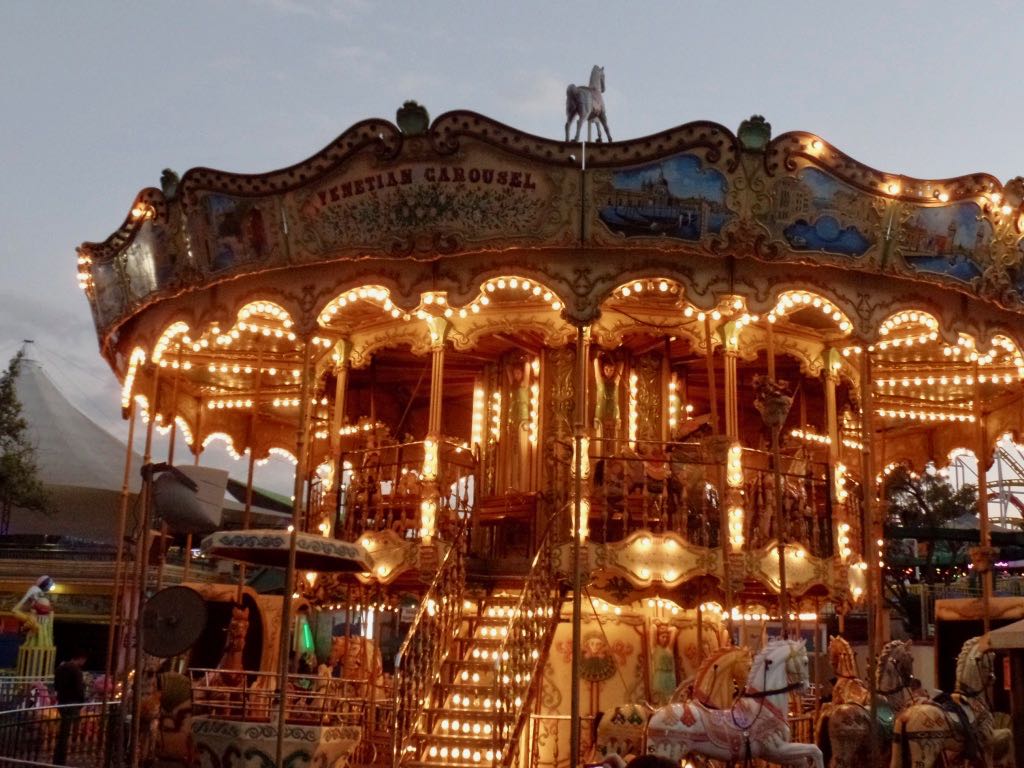 And here's the Venetian Carousel, illuminated in the early twilight glow. 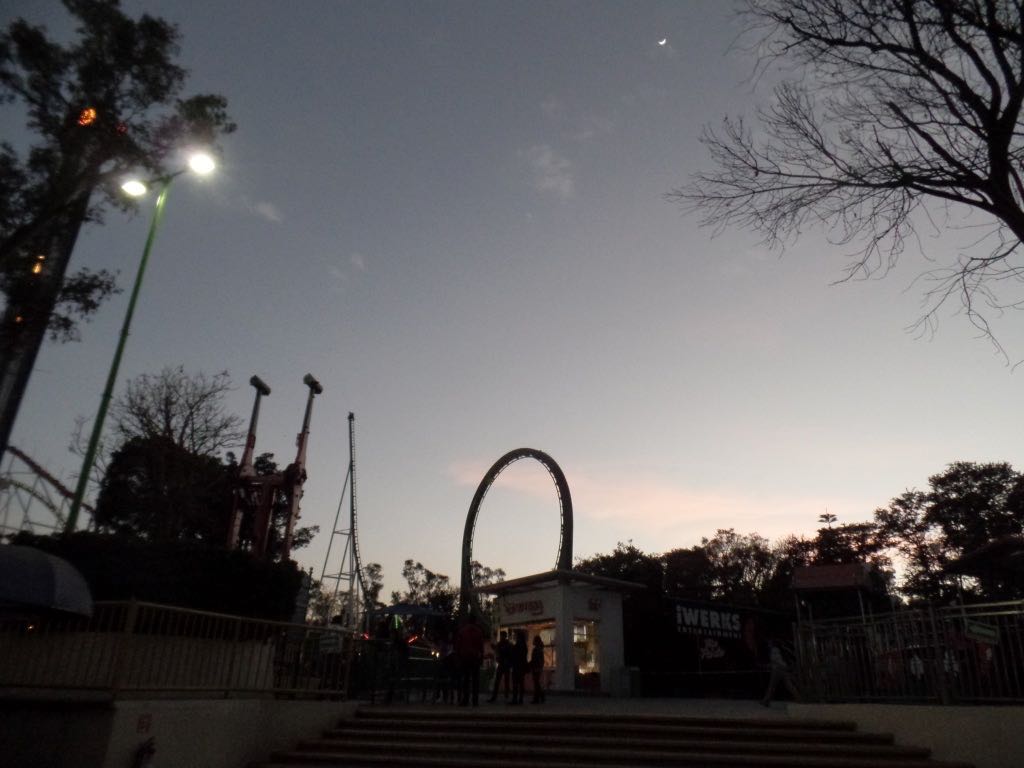 Looking back at Cascabel 2.0, with the crescent moon far overhead. I love this picture.