I saw below me a golden valley

The 4th of July we traditionally take in the Lansing Lugnuts game, as much as possible with

bunny_hugger's old grad school friend E, the only one of that group still in the area. We were up for this again this year. We don't know what dark magic the Lugnuts have summoned to get a home game each year for like four years running now, but all right.

The Lugnuts 4th of July game is always sold out, or close to it. And it includes fun side features, like, this time, a two-man brass band playing behind the box seats. Also a lot of foul balls that hit the stadium roof or, apparently, flew out to the parking lot. One of the t-shirts blown by the cannon also went over the roof.

And then about an hour, and one and a half innings, into the game the storm rolled in. They covered the infield quickly and the whole crowd huddled into the sheltered areas. We all went to the bathroom. When I got out, myself, I saw

bunny_hugger pushing past the crowd of people to get towards the stand selling frozen drinks. I joined her and we pushed slowly through lots and lots of people. The frozen drink stand is, and you knew this was coming, on the far end of the stadium. By the time we got back to about our section we had no idea where E was. But they did announce the game would resume. I was confident that when it did, we'd meet back up with E.

bunny_hugger fretted that he had gone so long without seeing us that he had left the game and we had no way to contact him. I thought it absurd to suppose that E would conclude, ``Well, I haven't seen my friends in twenty minutes. I'll pick a random direction and start walking in it, never to be seen again''.

So yeah, he concluded we had given up on the game, and he gave up too, going off to the sports bar kitty-corner from the stadium. We'll meet up with him again, maybe for another game.

As for the game? It was a decently tight game against the Great Lakes Loons, first-half season champions of the Midwest League East. This until a confusing moment in the sixth inning when one of the Loons hit a long fly that bounced off the field, and then the outfield fence. This was good for a double, and two runs. Then after some kind of debate the other two runners came in and somehow the Loons had a grand slam home run. The Lugnuts manager argued this with the umpires until he was thrown out, apparently the third time this has happened this season. I had no idea what all happened until I read the reports the next day. The ball was initially ruled a double, but after discussion with the home plate umpire ruled a home run, apparently because it hit the outfield fence high enough to be regarded as going out of bounds. All right, and I understand the logic there, but would've appreciated a stadium announcement because

bunny_hugger and I were just confused by everything there.

Anyway, that sank the Lugnuts. Had the play been a double they would've been down 4-1 at that point, tough but plausible. Being down 6-1 in the sixth inning? That's just demoralizing. The Loons had runs in the seventh and eighth innings too, as if that were needed, and the game ended 8-1.

Oh, and a new thing for the Lugnuts this year? The Lion King Cam, which they explained by telling people to ``hold up your Simba''. This baffling thing meant that while the sound system played the opening-credits music, you know, from the presentation of Simba at the start of the movie, people were supposed to hold up something. A lot of people held up their small kids. A few people held up plush dolls. Some folks got on camera doing this. So that's the Lion King Cam. Yes, it was all from the 90s version.

Lugnuts evening games start at 7:05, except for the 4th of July game. That starts at 6:35, we infer so that they don't repeat that time a couple years back the game went so long that the city fireworks went off during the 8th inning. Decent enough plan, but with an hourlong rain delay the game of course ran long, and the city fireworks started in the middle of the 8th inning again. I don't know what they're going to do. They can't schedule the game to start at 11 am, right?

The city fireworks aren't the only ones at the Lugnuts game. They have stadium fireworks for the 4th of July, as well as many weekend games. The shows are smaller than the ones had before the outfield fence was developed into condos. They have less space and time to set up the fireworks, and do it now by rolling three trailers out by truck. But the show was bigger than we remembered previous years' shows being, and the show was a solid ten minutes of fireworks from a great seat.

It would be slow getting out of the parking garage, as most of the crowd had not fled during the rain delay. That's about as we had expected. We got home to find E's message on the answering machine, and could finally say for sure what happened to him while the rain delay dragged on. 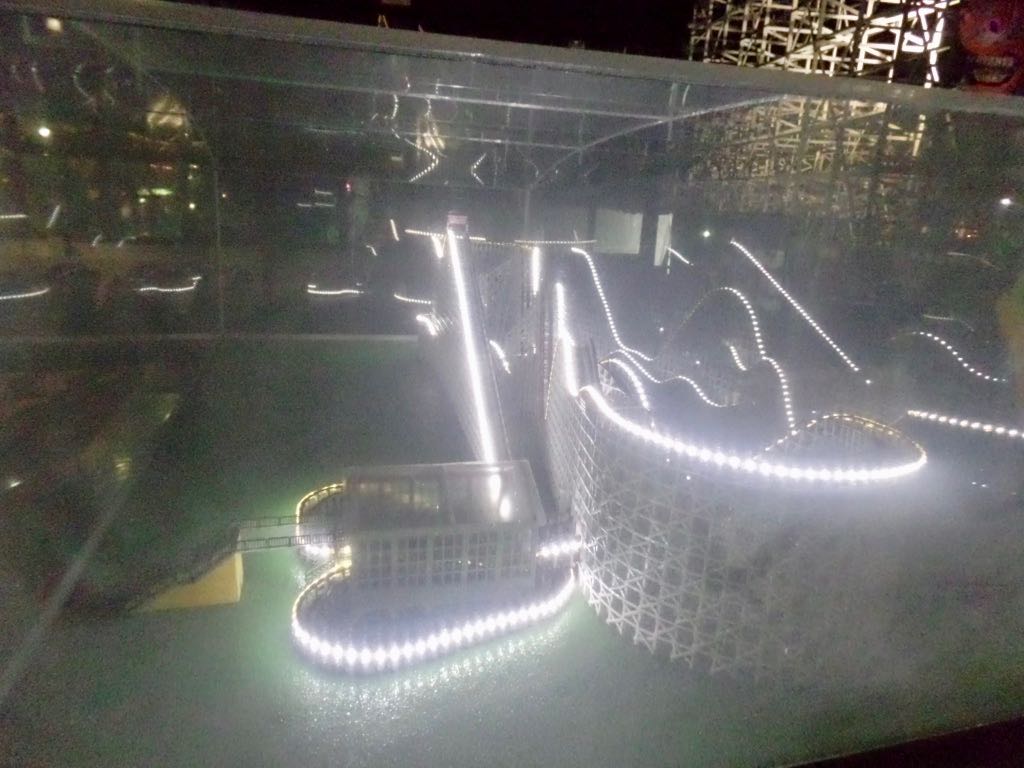 A side view of the Montaña Rusa model, which maybe gives you a better idea of how the train from the left side of the platform emerges from the station and gets to the lift hill. 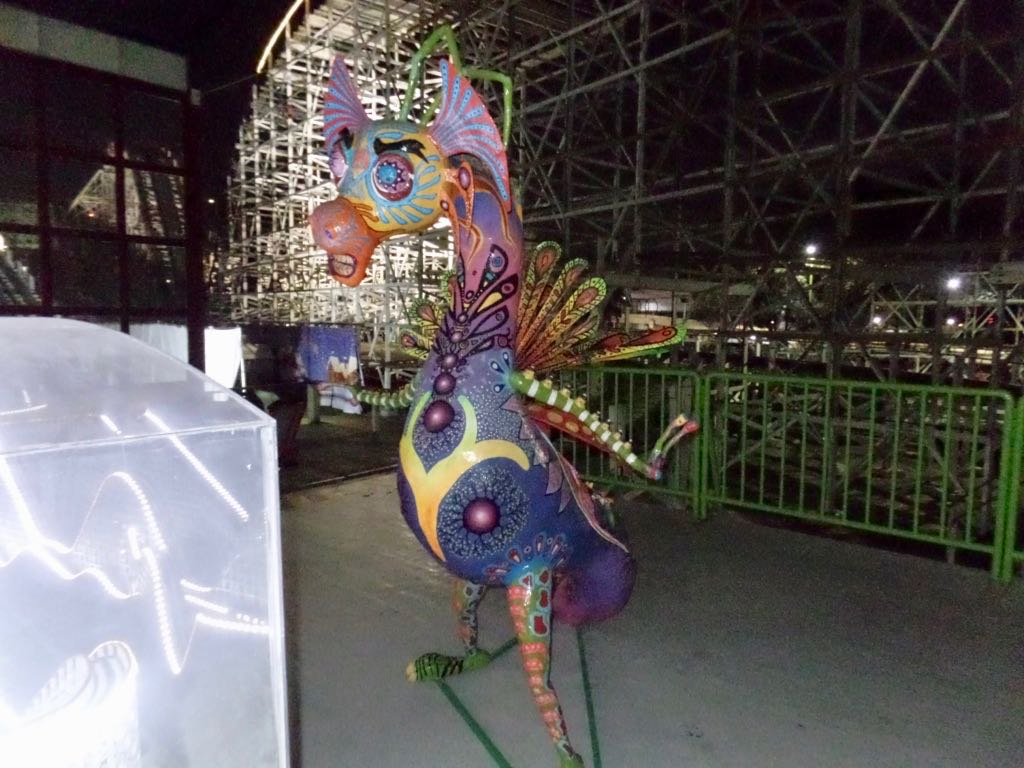 The Fire Snake(?) looking startled by my camera focus, in a last view for the night. 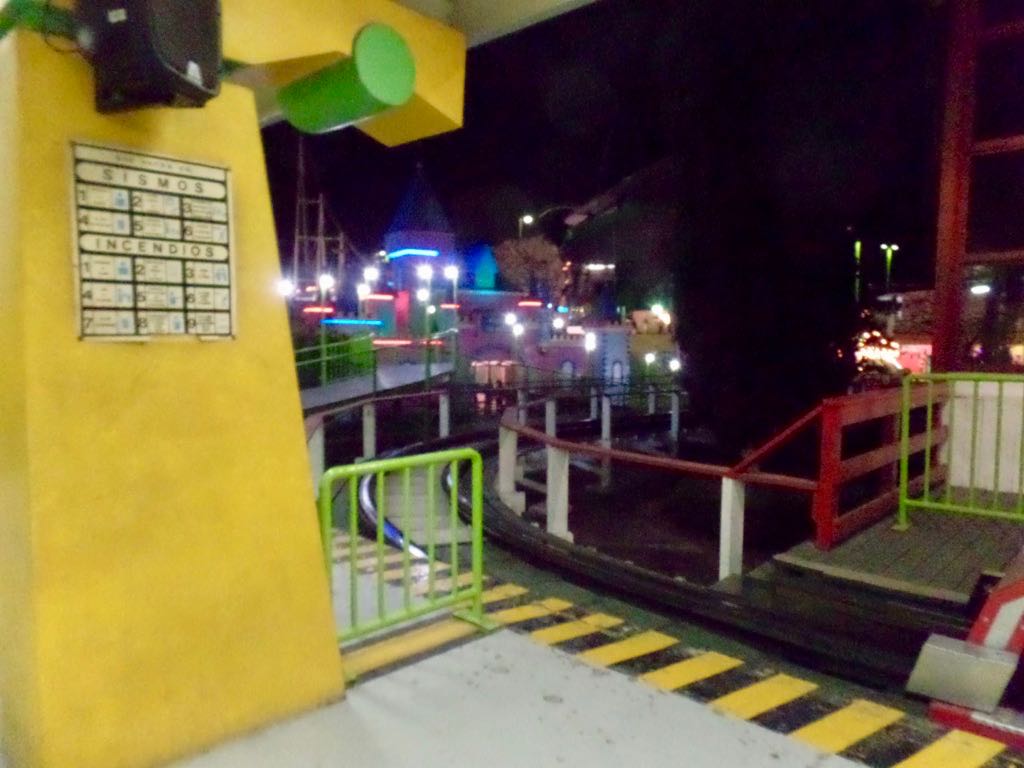 Last look at the platform, too, which includes signs about what to do in case of an earthquake.