I asked my dog what he thought the best in man

I have to break out of the orderly procession for breaking family news from last night.

It was just before midnight when the phone rang and

bunny_hugger and I asked who could possibly be calling at that hour. We let it go to the machine as we always do. It was

bunny_hugger's father, asking if she was there, please pick up. Then he hung up before she could stand up and walk across the room to the phone. Cursing that this better be an emergency she called their house and got their machine. She called again and got their machine again. We tried to think why he would call, say to pick up, not actually wait long enough for us to pick up, and then not answer when we called back. And realized he must be on the cell phone, and not at home, and there's not a lot of good reasons for that.

So her mother was in the emergency room. He'd taken her to the emergency hospital not in their small town, and not in the larger town ten minutes from them, but to the emergency room in the fairly big town they used to live in. He said he was confident this emergency room would actually be able to see her quicker, even allowing for the extra drive time. All right. The thing is, they'd been there since the evening, and their dogs needed to be walked. Could we do it?

bunny_hugger was getting the story and asking why they didn't go to the emergency rooms actually near them and promising that yes, she had keys to their house, I took care of Sunshine's evening needs and got ready to drive. It's about 45 to 50 minutes to their place, and it was already past midnight, but, mm. The dogs needed.

So we were maybe ten minutes from arriving when

bunny_hugger realized she had not taken their house's key. She'd forgotten it, an understandable mistake given how we never need it when we go visit them. I'd forgotten to ask about it, a mistake I hope understandable. I voted that we continue to their house and hope that her father had made a mistake and not locked the door in the rush of emergency. Of course he had locked the door.

What was there to do but drive back, check that there were no further updates, and then drive the whole long way back to their house again? All the while

bunny_hugger cursing herself for the mistake, and for having an extra hour and a half of driving on top of the several hours she'd already spent in the car, thanks to an appointment in Ann Arbor.

Her poisonous, self-punishing mood evaporated when we arrived and let out from her crate Peewee, the smaller dog. Peewee bounced around as if made of flubber and the dog's infectious joy at literally anything happening made everything temporarily better for

bunny_hugger. Well, Peewee had peed in her crate, as had the other dog, possibly because of the extra 100-to-120 minutes taken for us to get there. But still. Deliriously happy dog; what could be bad about that?

As her father directed I took Peewee out first and walked back and forth several times in their side yard until she finally peed, and peed again, and again, and good. I took Peewee back inside to her crate, and took out Pookie, their basset hound who does not like or trust must of anything except

Oh, she also likes Boots, this street cat, who had come around possibly to see what all the fuss was about. Boots also likes Pookie. They spent a good long time brushing against each other, rather than, like, going out to have a pee. While I waited for dog and cat to be friends

bunny_hugger let Peewee back out of her crate. She didn't want the dog to have so little free run time in such extreme circumstances. Especially since while Pookie did eventually have her pee, she didn't want to go back in the house, possibly because she didn't see

What was there to do? I picked Pookie up under the shoulders and carried her up the steps into the house. And, when she wouldn't go to her crate or even close to her crate, picked her up again.

bunny_hugger found this adorable. Pookie is not a small dog, which is probably why she was basically okay with this treatment. Big dogs are more interested in the novelty of being hauled like luggage than they are in the affront to their dignity.

And yet ... good grief but the dogs had pooped. Some, a couple little drops, in the dining room or such. One was a big old turd right on the front doorstep. We don't know who did it, but suspect Pookie. We also don't know when or how, unless it was in protest while I was carrying her.

bunny_hugger found this by stepping into it and then couldn't get her sneaker adequately cleaned. She also didn't think she was getting the doorstep adequately cleaned either. And she hated the evidence of how abruptly they must have left; there were even rinsed tomatoes left in the sink, and some leftover chick'n strips on the counter.

It was her father, of course; who else could it be?

bunny_hugger told about the mistake we had made and why we were there two hours later than we ought to have been. Meanwhile the freshly-crated dogs began howling with joy that the one person in the world they truly liked was back and they could leave the crates again. He was apologetic that we'd had to go through all that, and didn't mind at all the dog messes we weren't able to finish cleaning up. Oh, yes, and his wife and the emergency room visit?

After being rushed to the emergency room three towns over,

bunny_hugger's father --- who had waited a half-hour (he says) and asked a different nurse for painkiller --- that she and he had already had this discussion about painkillers.

bunny_hugger's mother, it turneed out, had a bowel blockage, one bad enough to need surgery. So they got a team together and operated, taking out eight inches of lower intestine. She came through all right, despite the worries of anaesthesic on a senior citizen who's been smoking since back in the 60s when smoking was mandatory. And, so far as I know, when I write this, she's all right, expecting to be released from hospital anytime between ``today'' and ``a week from now''. It'll depend how she recovers.

Trivia: About 940 people, many in their late teens or early 20s, worked in the Orbiter Processing Facility in early 1980 on densifying and reinstalling the thermal protection system tiles for the orbiter Columbia. Source: Development of the Space Shuttle 1972 - 1981, T A Heppenheimer.

Currently Reading: Greater Gotham: A History of New York City from 1898 to 1919, Mike Wallace. (Not that Mike Wallace.)

bunny_hugger and I went to the Cuicuilco Pyramid together and I took fewer pictures this second time around. 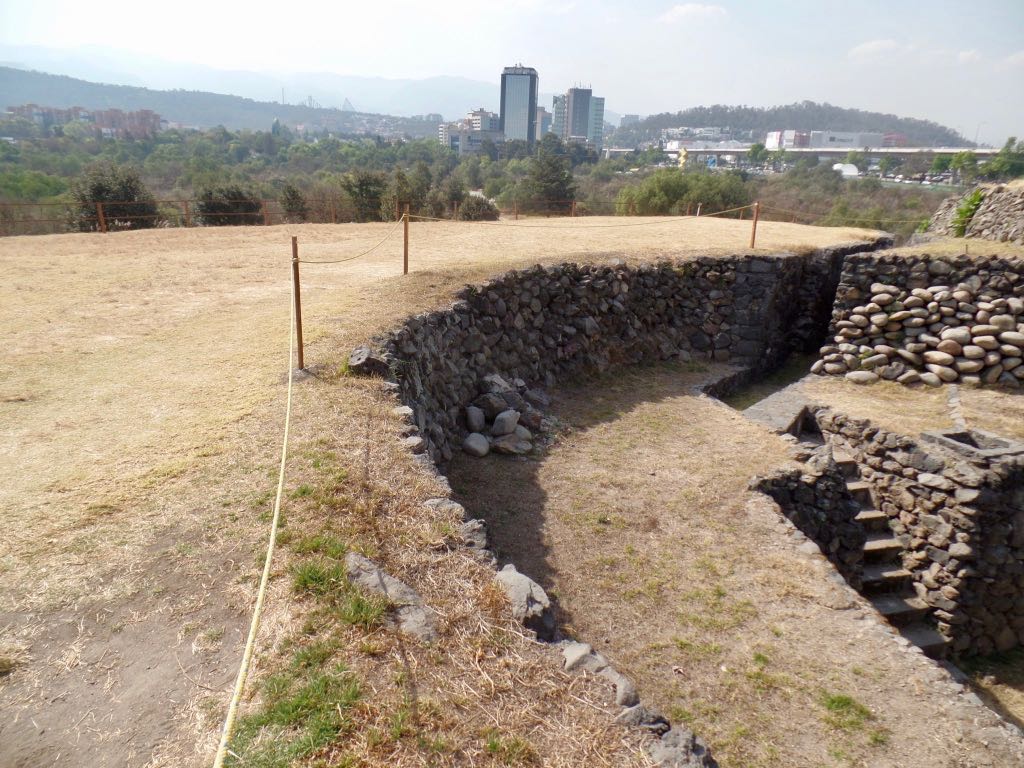 Back atop the Cuicuilco Pyramid. Also there's a pile of rocks which look as if they'd fallen down from this part of the altar inset, except that there doesn't seem to be a logical place they'd have fallen from. Yes, that's Six Flags Mexico in the far background again. 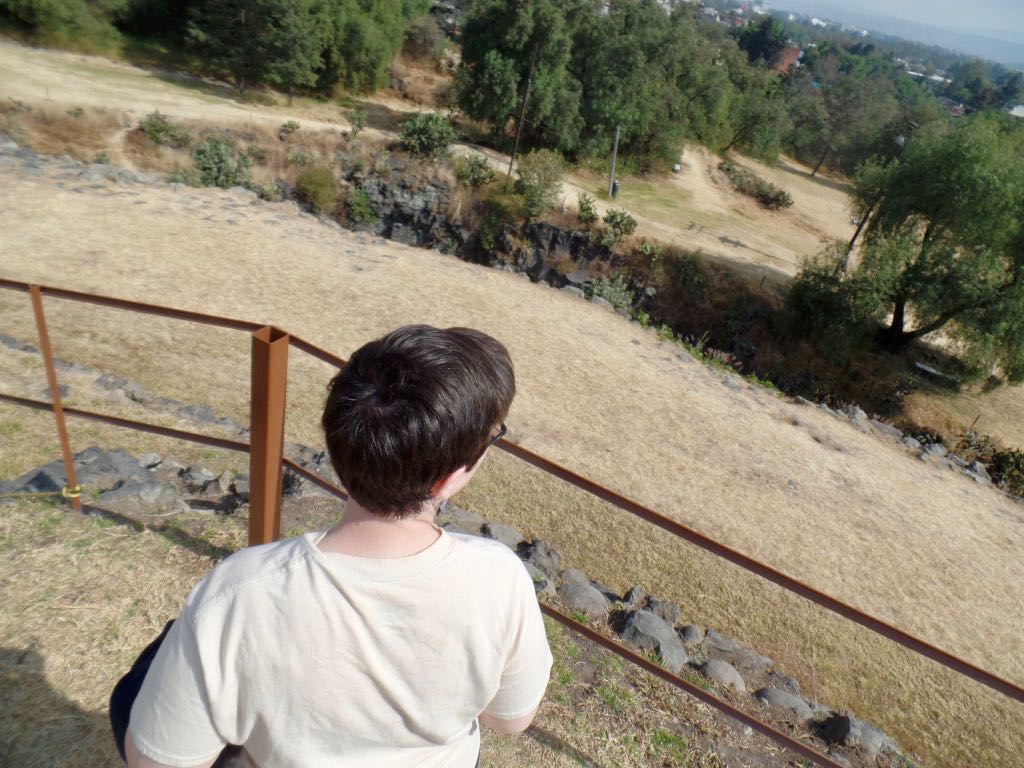 bunny_hugger overseeing the tunnels that lead to Structure E-1. 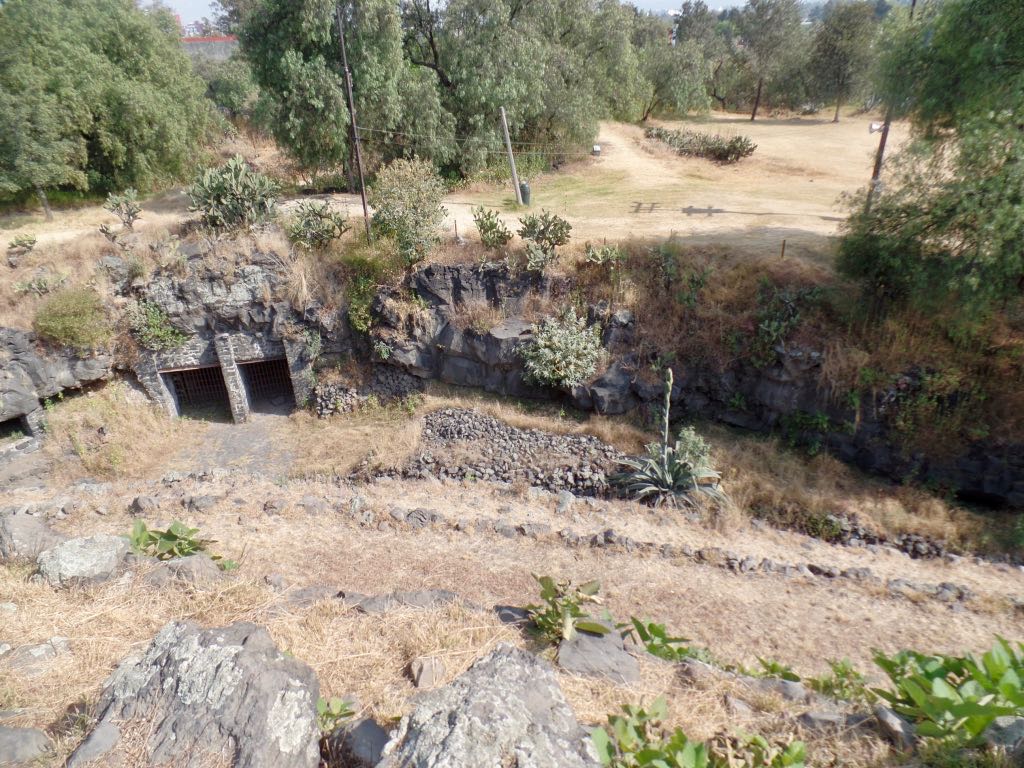 See? There's the tunnels, as well as the ``moat'' surrounding the pyramid.