To be looking at the board

Saturday of the Baby Food Festival

bunny_hugger and MWS and I drove out to Fremont again. We got there as the day opened for the last couple hours of open qualifying. The Classics finals were to start just after noon; Main, just after 3. At some point in the day would be the Women's tournament, which worried

I went to the Classics games. I had several strategic reasons for this. I was still rated, barely, for those playoffs. So I wanted to know how the games were playing. Also, I hoped to better my standing; other people would arrive in the last three hours of play and they could knock me down. Also, by being on a machine, I could keep other people from playing a game that knocked me down.

bunny_hugger, ranked above me in Classics, played Main games, trying to make sure she made it in.

Well, we both did, in Classics and in Main. She went in to Classics as the #10 seed, and me at #11. For the first round this put us in a pairing we wholeheartedly dread: playing against each other in a four-player group in the quarterfinals. Best of three games. Our opponents: PH, who's Michigan's state representative for the International Flipper Pinball Association and who'll decide where the championship will be; and SAL, a regular to Fremont tournaments who's in the finals quite often. The top two finishers will go on to the semifinals.

Our first game: Time Fantasy. This is one that reliably stumps me and that I only finally got one good game on that Saturday. It's themed to the shroomer art that guy in high school was always drawing. If you can shoot this Time Tube shot, you'll win. If you can't, you won't. Everyone else has known all weekend where the shot is; I haven't. Well, SAL finds that shot. This game, the rest of us don't. I manage second place with one-ninth SAL's score.

bunny_hugger has one-tenth his score, for third place. PH comes within three thousand points of

bunny_hugger's score but doesn't beat it.

The next game is Eight Ball. This is another pool game, with a noticeably non-licensed Fonzie on the backglass. It's a game we all love. There's fifteen targets corresponding to you know what. These set the base bonus. Then there's a 'candycane', a little U-shaped feature with a long leg, which builds the bonus. The strategy of this game is to shoot the candycane. Or just not lose the ball, which is a challenge. Except for SAL, who puts up 335,880, the eighth-highest score anybody recorded on that game the whole tournament so far. PH takes second place, and

bunny_hugger third. I have a lousy game, my first lousy game on this table all tournament, I think.

At this point SAL is mathematically guaranteed to move on. PH,

bunny_hugger, and I are all tied. Whichever of us beats the other two moves on. The game: Mystic. This is a crazy bonus-heavy game; if you can knock down a lot of drop targets in the first ball, you'll win. But the ball launches into the pop bumpers, and they launch it out of the pop bumpers to a drain about 150% of the time. I've spend a lot of the tournament testing it out and figuring how to avoid those sorts of instant drains. I'm sure everyone else has too. We do not show this knowledge. If you avoid instant drains you can expect a score of 200,000 to 500,000 on Mystic. SAL finishes last, with 37,420. PH just barely squeaks him out, at 37,900.

bunny_hugger is free to go back to putting in qualifying scores for the Women's and the Main tournaments and complaining that I always do better than her, which I do not.

Quarterfinals. I'm in a group with MWS and JB, who had first-round byes, and MSS, who along with BIL advanced from the other quarterfinals group. Our first game: Mystic. Where, oh goodness but we do not have good first balls. I have been happy the last several Fremont events that I haven't had the ball ping out the bumpers to an instant drain. I have that happen two balls now. MSS is having a good game, but everyone else is playing lousy. MWS only has 40,240, which I could certainly beat on one ball if the ball weren't heading out the right outlane. I shake the machine, trying to get it under control, and it tilts, wiping out a bonus of maybe a couple thousand points.

JB also has a lousy game, beating me by a couple thousand points. I don't know just what my bonus was when I tilted, but it's possible had I not tried to save the ball, I'd have beaten him on this game. But who would expect him to not be able to save his last ball either?

Game two. Surf Champ, an electromechanical which was not one of the qualifying games but was allowed into finals. It's got exactly the theme you'd think from the name. The game is hard; you want to drop the ball into a scoop that just has no good angles. You have to shoot the ball up in that rough area and hope. MWS knocks the game out of the park, putting up 124,800 points. I have always struggled with this game and after a couple house balls that I couldn't touch manage to get 45,840. A weak score but maybe okay if oh well, there goes MSS, edging me out, 52,370. Well, if JB doesn't have any kind of good oh, he put up 81,970.

At this point I'm eliminated; there's nothing I can do to move on. JB is all but eliminated; he would have to win the last game to move on. Our finalgame, then, is Knockout. This is another electromechanical. It's a boxing-themed game. It's a simple game: get the ball on either flipper and shoot it up the orbit to the top of the game, and repeat this forever. It's so simple you'd think I'd be any good at it. My usual game finishes about 50,000 points. A couple times I have ever reached 100,000. Everyone else has put up games above 150,000 at one time or other and I don't know how. MWS has a terrible game to start, putting up 21,190, something even I can beat. Me? With nothing to play for? And all I could possibly do being spoiling JB's chances of moving on, or forcing a tie to move on? I have maybe my second-best game ever, putting up 102,480. MWS is chagrinned, but he can take it. When MSS puts up his 99,380, he and MWS are assured to move on. JB has a 40,760, my usual score. MWS and MSS go on to finals; JB and I tie for 6th place in the Classics tournament. Had I not tilted away my bonus on Mystic, and everything else been the same, I'd have tied for 5th place instead. Had I not tilted away Mystic, and had I kept Surf Champ going a little longer, I'd have forced a three-way tie for the two finals spots.

None of this was consolation to

bunny_hugger. But there was still the Women's tournament, as well as the most valuable one, the Main tournament. It's also disappointing to me, but then this was my best finish in a Classics tournament since 2016. Which is odd; I have the mental impression that Classics is my terrain, and the record just says no, it is not. It turns out I just like playing them.

PS: More of what 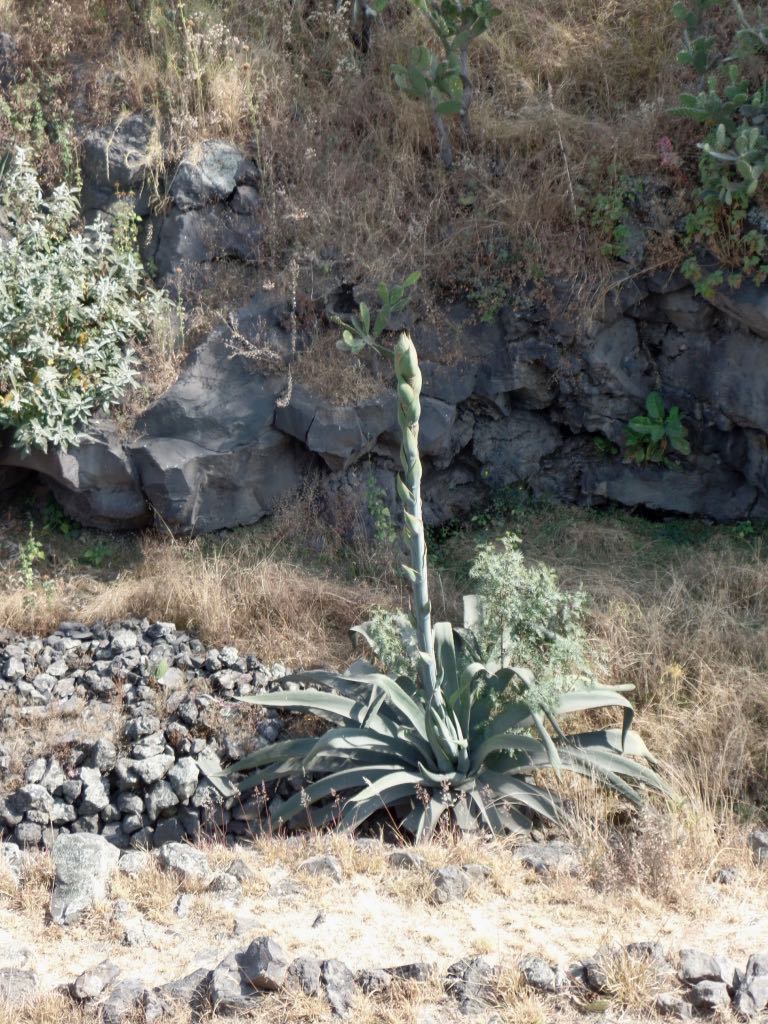 Honking great plant of some kind I'm not sure that's growing in the ``moat'' around the pyramid. 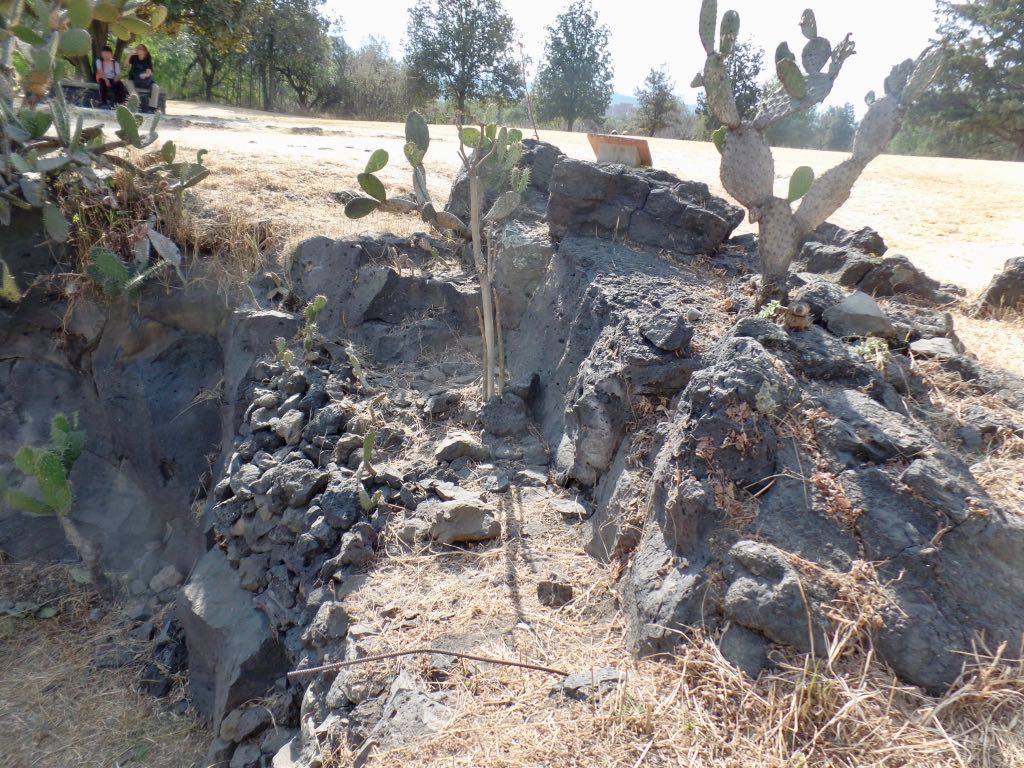 Cactuses and other plants growing near the ``moat'' around the pyramid. 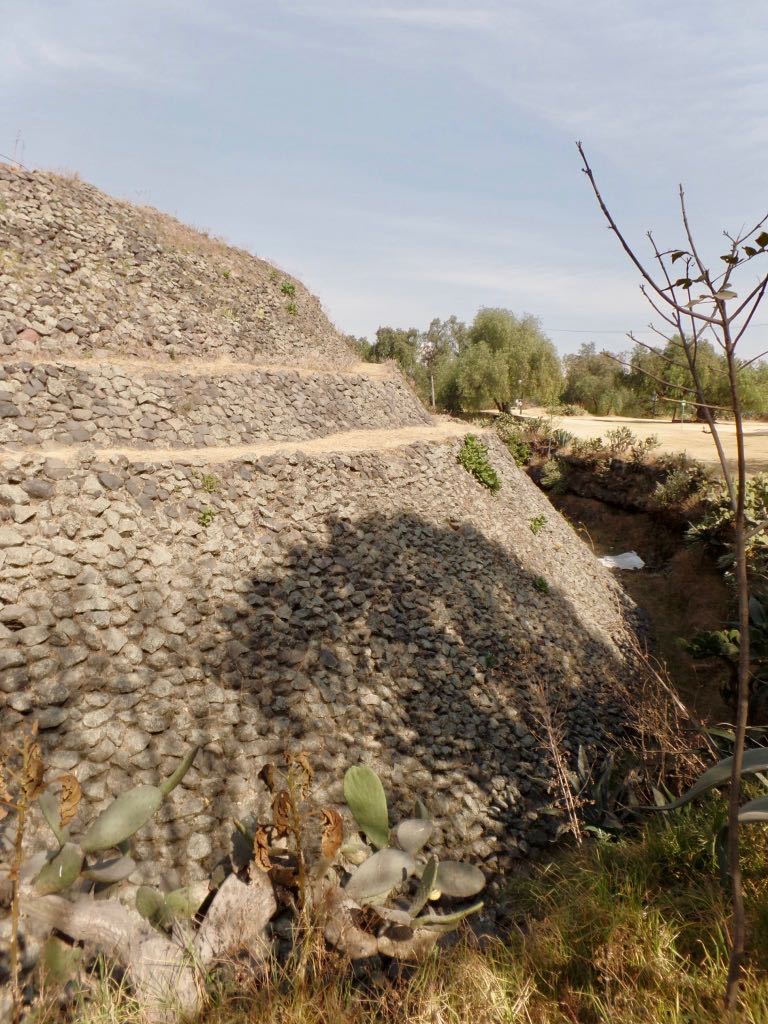 And here's a look at the pyramid from the side that lets you see how deep the ``moat'' around it does get.