Not looking at the city

Baby Food Festival, 2019. Once I was knocked out of the Classics tournament I could return to putting my own scores up for Main. In not a single case did I improve any of the scores I'd done the Saturday or the Thursday before. But I could at least warm up and get a feel for how the games were playing that day.

My doing this came to a stop when the Women's Finals began.

bunny_hugger had figured this division her best chance at bringing a medal home. It's a good calculation. Only four people would compete in the three-game finals, but she had spent almost the entire tournament as the top-ranked woman playing. She was squeaked out in the last hour by MKS, who put up a runaway game of Aerosmith, but still.

bunny_hugger just had to not finish last.

The first game: Breakshot, one of the few games from Capcom Pinball. The game was a mid-90s attempt to make a game with an electromechanical-style layout --- no ramps or subways or anything --- with modern game elements, like multiball, an animated dot-matrix display, audio instructions to the players, and distractingly gratuitous sexism. Does the backglass need to feature ice dropping out of a woman's glass into her breasts? Does the screen need to sometimes show this scene, animated, complete with the woman shaking after this? It's a curious choice for the Women's Division, given nonsense like this, although the indefatigable KEC, who heads the Grand Rapids Belles and Chimes league, specifically asked for it. If you can ignore the breasts it's a decent game.

bunny_hugger has a lousy first ball and was in a foul mood. What could I do? I advised her: this game is, basically, an electromechnical. Play it as if it were. An electromechanical game has two important things: first, send the ball up to the top of the playfield. Second: let the ball do its business. You shouldn't be messing with it.

The second game is Whirlwind. It's a very hard late-solid-state game. It should be easy, if it were possible to make either ramp shot, but it's not, so it isn't.

bunny_hugger has overcome her hatred for this through experience, learning some of how to manage this touchy game. Also from realizing the playfield is very close to what you'd get if you flipped that of Funhouse, her favorite game, horizontally. It's not a runaway game here: the lowest score is ZJH's 1,156,010. The highest is 1,814,850.

bunny_hugger is assured a medal. She's guaranteed to get at least second place, and that only if she comes in last while MKS also comes in first. The game is Aerosmith, on which MKS put up the best score in qualifying. This is a game that should be fun, but isn't, because so many of its shots are instant death. But

bunny_hugger takes home the gold medal, in the Women's tournament, adding to her pile of hardware from the Baby Food Festival/Meijer State Games. KEC finishes just ahead of MKS; MKS had more second-place finishes, but a first-place finish is worth that much. ZJH finishes in fourth place, after coming in fourth all three games. It's rough, but she takes it well.

So back to qualifying, and the wait for Main Finals to start. And here they are! And ... oh, that's a power flicker. There's a heavy rainstorm coming through. The power never goes out, but we do make jokes about it. And think about the poor Baby Food Festival, since the torrential rain has to be destroying the big event. And this is not the first time rain has smashed the Baby Food Festival since we started attending its pinball events. The Special When Lit facility is too far from Main Street for us to see things, or to pop over and hang out at them. But we can see that it's impossible to see the cars in the parking lot through the rain, and we can deduce what's happening.

Well. Main Qualifying ends, and to my slight surprise I rate the Pro Division, the top sixteen players. To her greater surprise

bunny_hugger does too. Either of us making the final four would secure our positions in the state championship this year. Making it past the quarterfinals would put us in good shape.

My quartet: AJH, running the tournament; JB, recently come from Lansing to play altogether too well; myself; and JH, a woman I don't know. It's easy to suppose a person you don't know is lousy at pinball, but that's never wise to do. After all, she made the top sixteen.

Our first game: Aerosmith. It's still a tough game, but I've been playing it pretty consistently well at the SWL facility this past month. I have my first inconsistently bad game, and come in last. All right. The next game: Spider-Man. I'm less reliable on this game, but I've worked out the essentials. There's two multiballs that it's easy enough to start, even with the game on its advertised Hard Settings and with the slightly-shorter-than-design-spec Lightning Flippers. (The flippers have this lightning-bolt pattern on their top side.) And if you hit the Sandman target, right in the tempting center of the playfield, you get a mode started and a mode plus a multiball is usually a good day. I ... have an okay day, putting up 35 million points. JB puts up 51 million. AJH, 52.8 million. AJH is already sure to move on to semifinals. JB is the safe bet. But I can move on if I win the last game while JB finishes either third or last. AJH takes first place, and JB second, which is almost the opposite of what I wanted. They'll move on. I'm out of the tournament, tied with JH for 13th place. AJH goes on to win the tournament; JB, to take third place.

bunny_hugger? She's in a four-player group with BIL, MSS, and MKS again. The first game, Time Fantasy, one that everybody but me knows how to play.

bunny_hugger has her first outright lousy game of that in a while, putting up a score I could beat, and comes in last. The next game is Congo, a high-scoring game on which

bunny_hugger can confidently put up a billion points, a score which would have won this round. If she were playing confidently, which she is not. She puts up 247.5 million, just barely squeaking out MKS at 246.9 million. BIL wins, assuring his advance to the semifinals.

bunny_hugger could still advance --- she's in literally the same position I was after two games. She would have to finish in first on the third game, Surf Champ, while MSS had to finish in third or fourth place.

bunny_hugger plays this old and irritating electromechanical first. She finishes with 56,150 points. MKS is player two, and finishes with 62,700, finishing

bunny_hugger needed him to take. Had

bunny_hugger had a very slightly better ball, at any point in this game, she'd be moving on. And instead, we're both out of the Baby Food Festival/Meijer State Games main tournament.

MWS has a lousy first round also, three third-place finishes that leave him tied for 11th with

bunny_hugger. KEC has a one-game playoff against SAL, missing the chance to advance and taking 9th place. BIL gets to the semifinals, but can't advance, finishing in 5th. MKS makes it to semifinals too, but gets a third and two last-place finishes, leaving her in 7th place.

bunny_hugger was in a foul mood after losing this chance to get back in the state championship race. Had we been on main street she could have gone to the fair and remembered that there's other things in the world. But we're out of walking range and, in any case, nothing would be open until the rain was passed (which it was getting to doing). Me, I went around playing games to enter the next Fremont Monthly Tournament, figuring the best I could do was improve my chances for a tournament that wouldn't be worth as much as this, but would still be something. But it's hard not noticing how much that's just consolation.

And we had an alternative plan. After all, Fremont is just like a 20-30 minute drive from Michigan's Adventure. We, with MWS, had talked about going to that park and riding roller coasters if we got knocked out early. We had done this two years ago. But we checked the park's operating hours and discovered it was closed, presumably after the rain blew through. And JB was counting on us for his ride back to Lansing, so there wasn't anything to do but hang around the site of our failures until he was done. He made the final four.

Trivia: In the French Occupation Zone of Germany during 1945 the total harvest of bread grain was less than half what it was in that area in 1938; of potatoes, about 56.6 percent the prewar harvest. Source: Germany 1945: From War to Peace, Richard Bessel.

PS: Oh, yeah, I'd promised to let you know What's Going On In The Amazing Spider-Man? Is Spider-Man ever coming out of reruns? May - August 2019 plot recap here for you.

PPS: Our Monday in Mexico City

bunny_hugger was back at the conference. I went walking. Come with me, won't you? 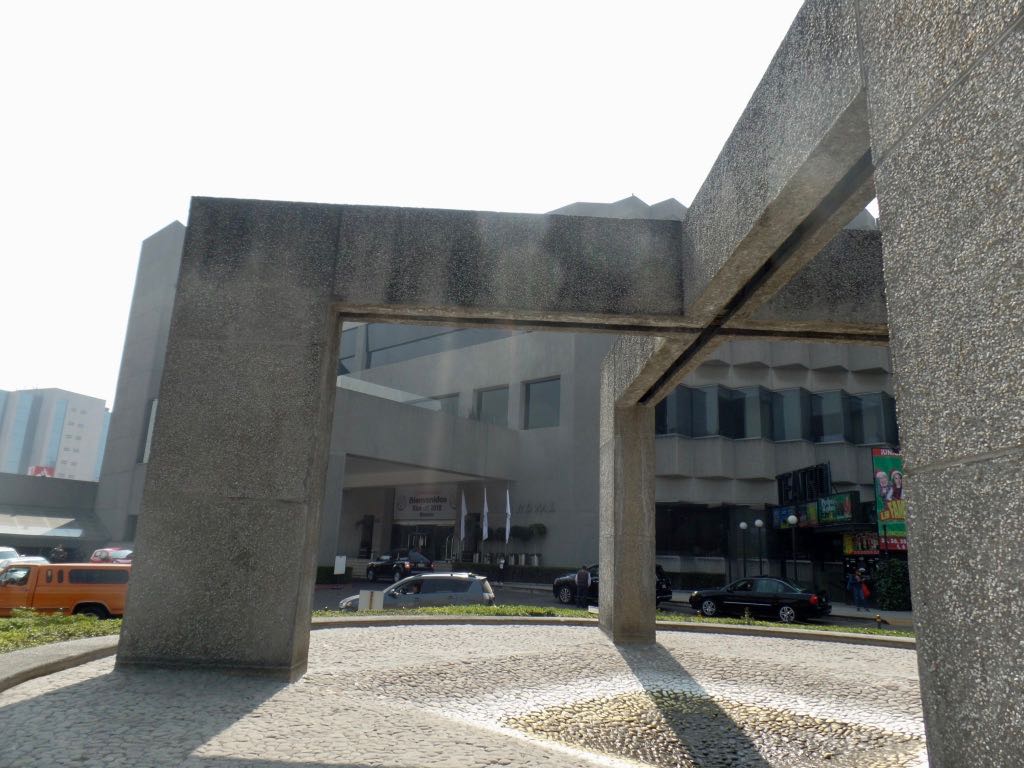 Curious elevated cross structure that was beside the bank adjacent to our hotel (in the background). It was just attractive enough I wanted to remember it. 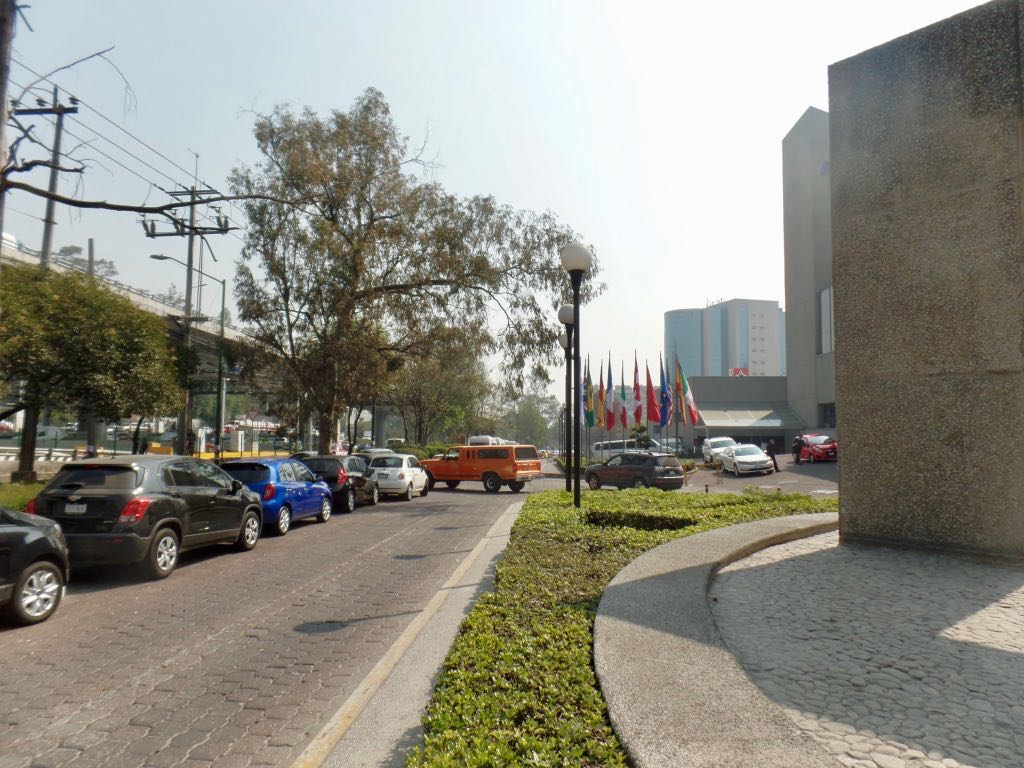 And peering from the road leading to the hotel, and bank, back in the hotel's direction. 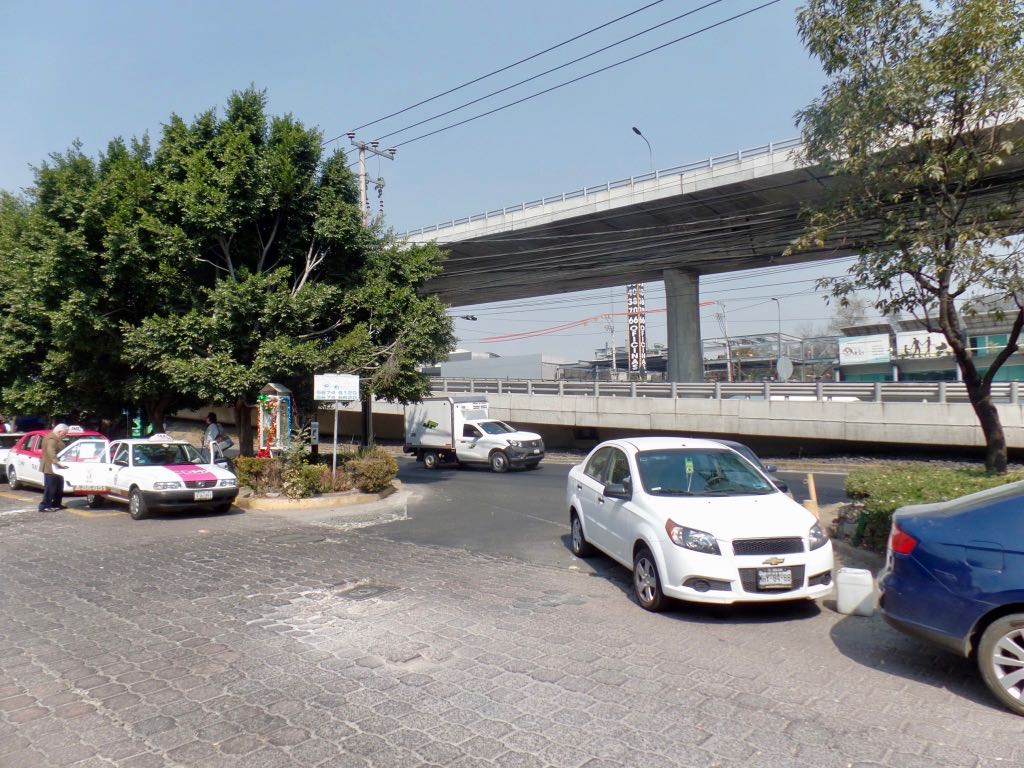 Reverse angle. There was a lot of traffic, including a fair number of officially licensed taxis, and it felt fairly anxious to be walking around all these cars moving to a pattern I didn't understand. This doesn't come across at all in a still photo.