When the birds dance too, and the poets will all join in

So in mid-July we had a very hot spell. Hot enough we started freezing two-liter bottles of water, and setting them beside Sunshine. And, amazingly, Sunshine liked this. We'd never known a rabbit to use ice bottles to stay cool before. But since that was working we were going to keep doing it ... until I noticed one day that the bottle had not frozen. The refrigerator started working again, after I unplugged and replugged it, but that's not the sort of thing we can put up with.

Thus we went shopping. This included some fun bits where we were trying to figure out the volume of our existing fridge. I wasn't sure what the right measure for the depth of our freezer was. It seemed like every fridge we might get was of smaller volume than what we had, especially from the freezer. This turns out to be true. Our old fridge, dating to we estimated the mid-90s, was from an era of giant freezer space that has since passed.

We found some fridges on display at Best Buy and at Lowe's, none quite what we wanted, which was ``EnergyStar certified'', ``not Smart'', and ``not, like, big enough to store my car in''. This turned out to be very few models. Indeed, the only one we found that met all our needs and would definitely fit through our doors was a Sears Kenmore. Our old fridge, something like a quarter-century old, was a Kenmore, which is a good recommendation for Sears of 1995. But today's? Would Sears last long enough to honor a warranty?

Ultimately, Sears made their fridge very attractive. It didn't cost much to start with, and it was on sale as part of an appliances sale. And there was a further sale for freezer-top fridges. Plus Sears offered

bunny_hugger something like a hundred dollars in store credit (for future purchases). Add to that the rebates the Board of Water and Light offered for our replacing an old appliance with new, and for buying an EnergyStar appliance, and I'm pretty sure we made money on the deal.

By carefully not buying groceries we were able to eat the fridge contents down to where, the day the new one was to come, we were able to fit most everything into our cooler space. The only stuff that had to sit out on the counter was things that don't really need refrigeration, like bottles of pop, or that can survive in room temperatures for an hour, like catsup. They delivered the fridge using that belt harness thing that I've seen pictures of but didn't know anybody in the real world actually used. It all went very smoothly and none of my measurements of the door sizes were wrong. They took the old fridge out to the garage, to wait for pickup by the Board of Water and Light. Here it sat for two weeks, one of which we were at Pinburgh for a trip that's going to fill the rest of this month and likely a good chunk of September. This also let me discover the production date on the back of the fridge, 03-14-1995. Good bit of work there.

The Board of Water and Light had people come by two weeks later, the first time their schedules and ours aligned.

bunny_hugger wondered if it was odd I took pictures of the old fridge going away. I doubt it. We're sentimental people, but this isn't so weirdly sentimental as to stand out.

Meanwhile our new fridge? That's ... some adjustments, in part because we have less freezer space and everything fits a little differently. It makes clicking noises some, which reviews warned about, but since we don't have to live in the kitchen they're not much bother. And we've got several tubes of meat already in the freezer.

This because of our curious neighbors. They had done a massive grocery shopping expedition and that was nice to see as we've been worried about them. Then one knocked on the door. They had too much stuff for their freezer, so, did we want any tubes of meat? These are tubes of ground beef, wrapped tight in plastic and looking like giant liverwurst tubes. I thanked him but told him we're vegetarians and he started apologizing so deeply you'd think he had said something bad. But I did say, we'd be glad to hold them until they had some space in the freezer. As I write this they haven't asked for their tubes of meat back, but you never know. Especially with them. We've gotten word that they're moving out in a year and we hope the report is wrong, since they've been fine, fun neighbors to have.

Trivia: At the end of 1949 the British Post Office allowed Reuters to employ its own operators for high-frequency radio-teletype service between London and New York City. Source: The Power of News: The History of Reuters, Donald Read.

PPS: The start of my journey into the woods in Mexico City. 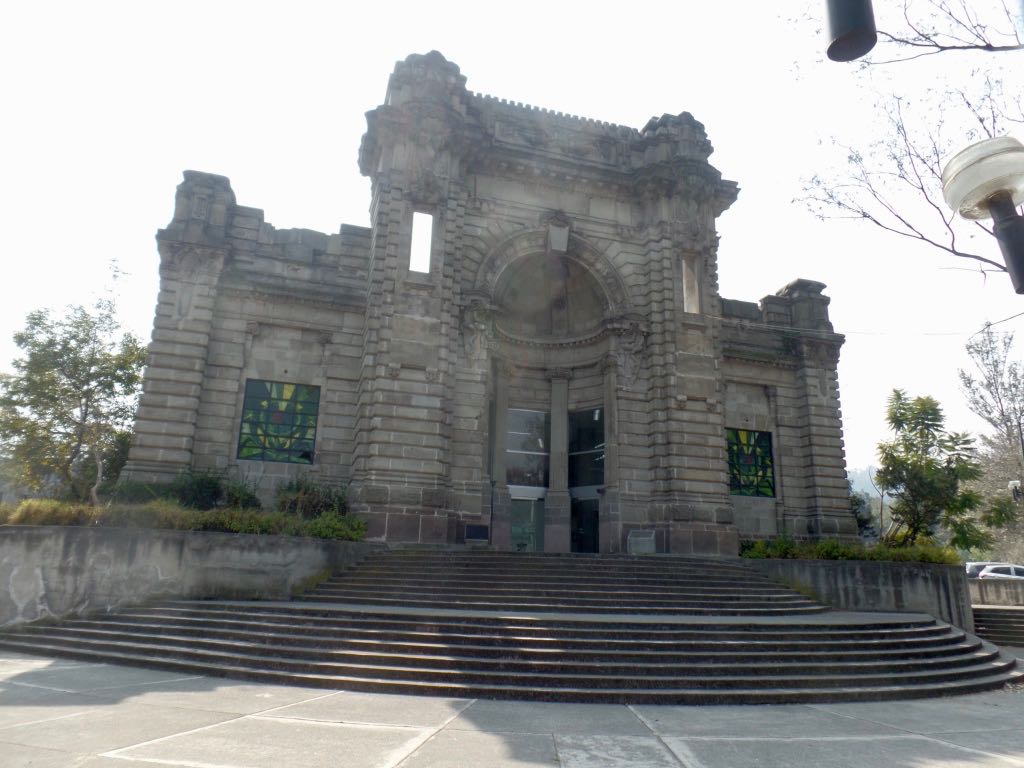 A small art museum at the entrance to the Bosque Tlalpan, the big Central Park-like nature reserve inside that area of the city. 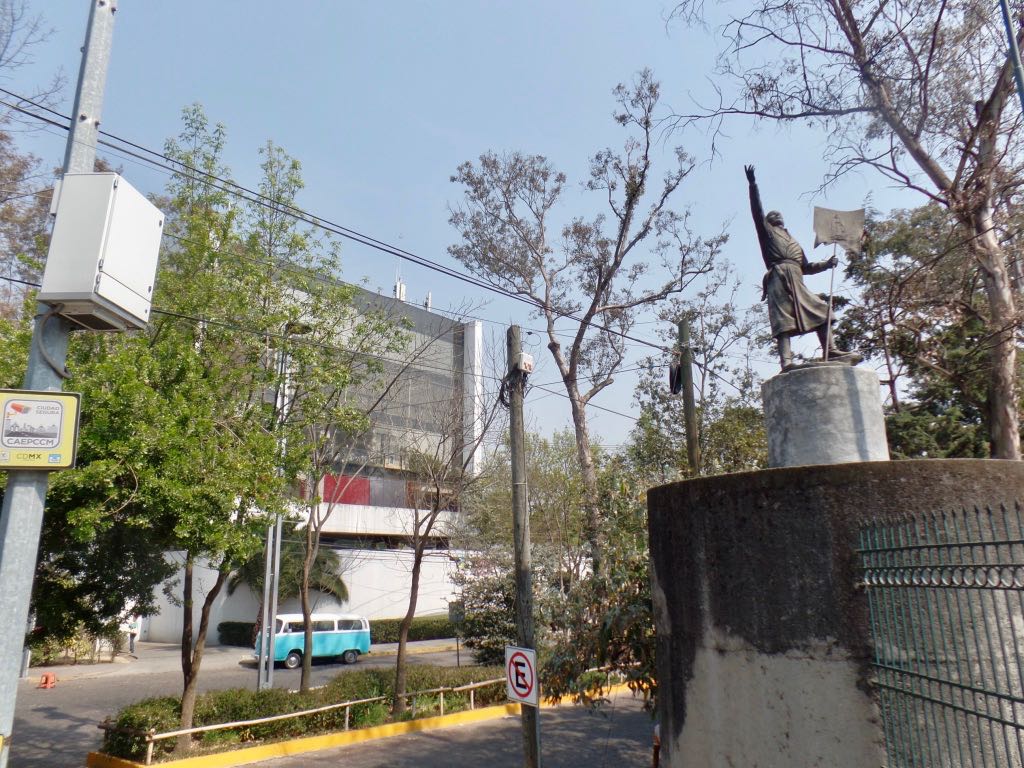 A rousing statue outside the art museum whose purpose I don't seem to have recorded. 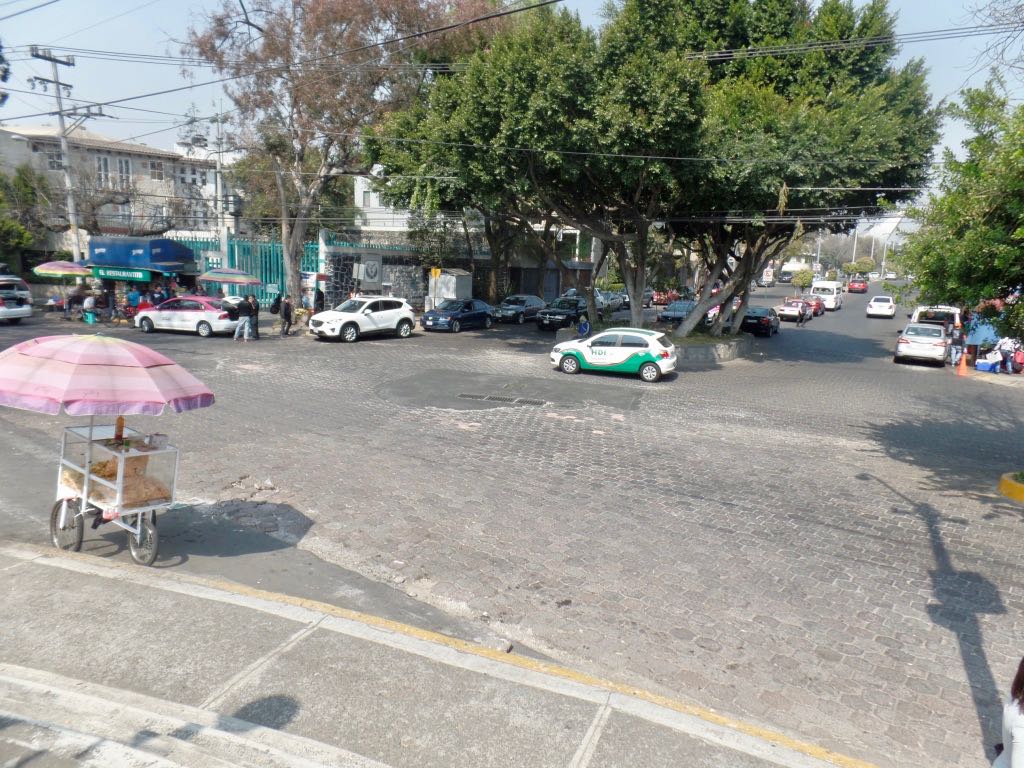 That street in the center is the path back to the hotel. Off to the left you can see the food carts and vendors that I got a snack from.