The last week of July and first weekend of August saw us go to several amusement parks and Pinburgh, so you know what's coming in these pages for the next like eight weeks. The run-up to all this was our usual sort of preparing-for-a-major-trip excitement and stress and hollering about whether anything was going to be ready. The evening before our departure, as she was watering plants,

bunny_hugger stood at our goldfish pond, watching and looking for the ones we recognized.

It was one of our two biggest fish --- we've chosen Magnum as the name for this one; the other is Gemini --- and one of the few survivors from the original thirteen we got in 2013. Though our pond isn't very deep there is space for a goldfish to hide, especially in the dim light of evening, but ... his body's like eight inches long, and bright orange. He's not that hard to spot. But the pond was netted, and the net hadn't fallen in or anything. Predators, particularly raccoons, could get at the pond, yes, but how could they get at a goldfish and put the net back?

Finally we saw among the rocks at the edge of the pond a terrible little spot of orange. A goldfish trapped, buried under a rock somehow. We both watched it, thinking first of what could have happened --- did a rock somehow fall off the edge of the pond when Magnum was nearby, and crush it? How did the rock come to a stop, though? --- and then of how bad it might look underneath. We hadn't definitely spotted Magnum in a few days. His corpse could be torn open, worm-eaten, moldy ... all kinds of horrors.

And then I noticed the flash of orange still visible was his mouth, and it was fluctuating. He was still breathing water.

Now we got to emergency mode. We got a five-gallon bucket and filled it partway with pond water. And gingerly lifted the rock, revealing that Magnum was ... stunned, barely mobile. And had this terrible nasty gash on his dorsal area. His fins seemed to be intact, but he'd clearly scraped something terrible, we infer in the panicked thrashing about a goldfish will do if caught between several rocks.

We rushed Magnum to the Preuss, the pet store in town. They specialize in fish. They have a fish specialist on staff. They've housed fish before, that one with the golf ball size bulge in her abdomen. They'd be able to say how dire things were. While waiting for their fish experts Magnum seemed to be rousing, as if now that he was free he was already getting his strength back.

Their verdict was that Magnum was badly scraped, but not seriously injured. He didn't seem to have an infection, so if we could put him in quarantine for a week or two, maybe with some antibiotics, he should be in good shape. And, you know, any other week we'd be very able to keep a fish in quarantine. But we were getting ready to be out of town for eight days. That's all right: they were able to keep him in a quarantine tank, with antibiotics, and house him until we were ready to pick him up again.

They estimated the fish kenneling would cost about $10 a day, plus a bit on top for the medicine. The people in the aquarium section said we could pay when we liked, right then or when we picked the fish up. At the register, they said we should pay when we picked up Magnum. This ended up fiscally wise: when we did pick up Magnum, they seemed unsure about just what to charge. Rick Preuss, the owner, happened to be there and prescribed $3 a day for the ten days, plus $10 for the medicine. We have no idea how an estimated $100+ turned into $40. I have the hypothesis that they have a nominal price, but they give us a break because we are being so diligent about caring for our fish. Remember that they gave an extra week of care, gratis, for the fish with the ovarian cyst. (That visit we had prepaid for, come to think of it.)

And as for Magnum, who did not die?

After Pinburgh, when we returned to the store and saw Magnum again, they thought ... mm. Well, that another week or so in quarantine wouldn't hurt. His abraded scales were healing, but that takes time. If we could set up a tank and give him some Melafix he should recover enough to return to the pond safely. Really they figured he could be put in the pond and given Melafix, which is mildly antibiotic and doesn't harm healthy fish. But our pond is about 1300 gallons and there's no buying enough Melafix for that.

So we set up one of the stock tanks we use for the winter as a quarantine tank. We only filled it to about 25 or 30 gallons, using several buckets of pond water to provide any kind of bacterial base. We had not had a water filter put in the pond, to soak up the bacterial culture. This is something we're going to have to correct, since there's no guessing when we'll next have a fish emergency. We were risking a serious case of New Tank Syndrome, that sudden explosion and crash of microorganisms in a newly-set-up tank. We didn't, though, thanks to the pond, which was able to give five or ten gallons of water to change out every day as needed.

Melafix, by the way, smells like one of those soaps that's a little too nice and vaguely scary to actually use so you just set it out in the guest bathroom and hope. I like it.

So after a week of this? Magnum seems to be recovering. Even to have scales growing back, or at least starting to. He has seemed noticeably bored, possibly because we didn't go capture another goldfish to be a companion in quarantine. But we seem to have come through the emergency tolerably well. And now we aren't going to have trouble telling Magnum and Gemini apart, at least not for months.

We are very lucky

bunny_hugger insisted on so closely inspecting the goldfish before we set out for Pinburgh, though.

Trivia: The astronomer Christopher Clavius wrote six treatises explaining the reasons behind and supporting the logic of the Gregorian calendar. Source: The Calendar: The 5000-Year Struggle to Align the Clock with the Heavens --- And What Happened to the Missing Ten Days, David Ewing Duncan.

PS: The park's vast, and downhill. I finally got there. 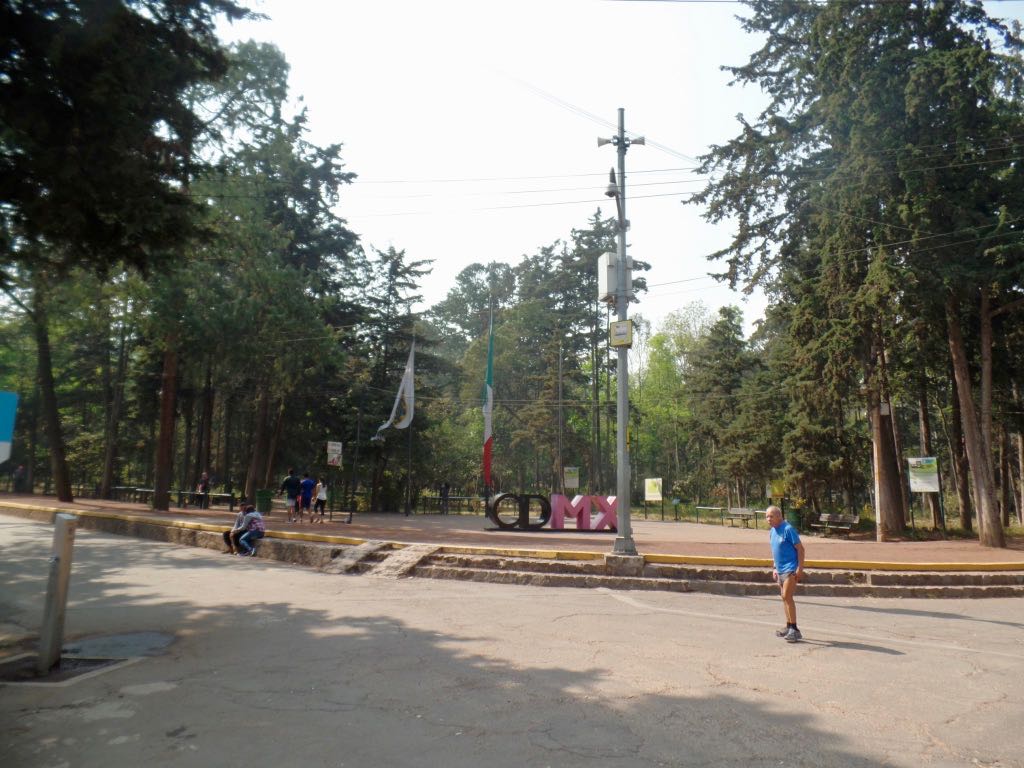 Entrance proper to the Bosque Tlalpan, with the CDMX logo that identifies stuff of the Mexico City government. 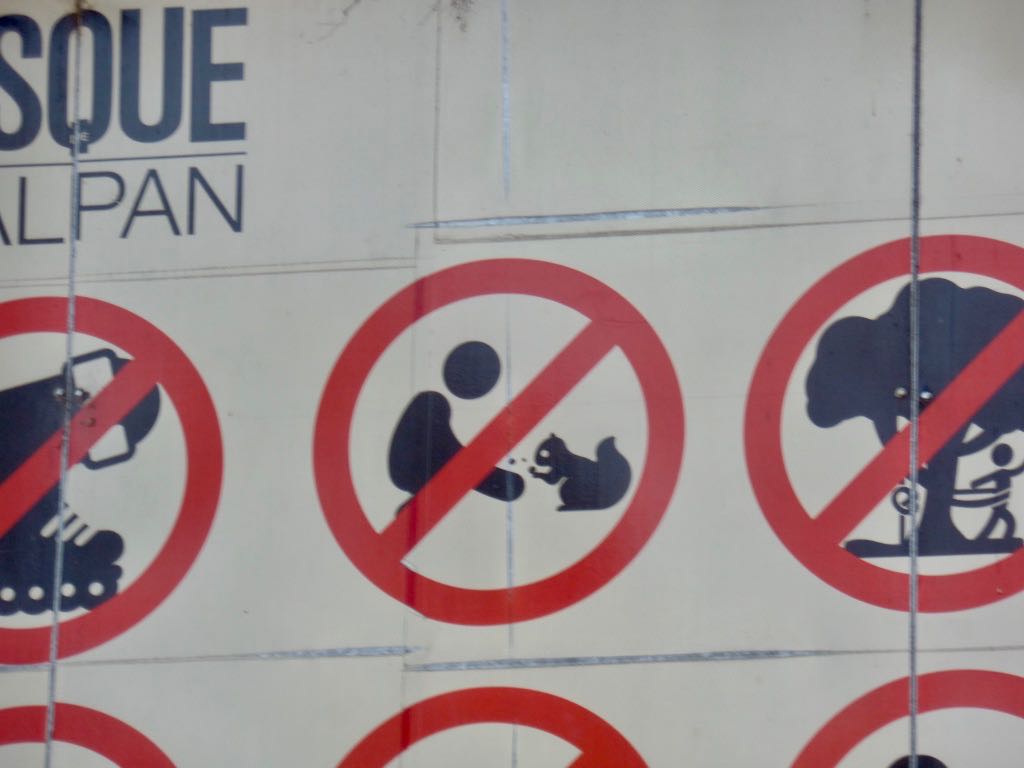 Warning sign at the park: do not play dice with the squirrels. 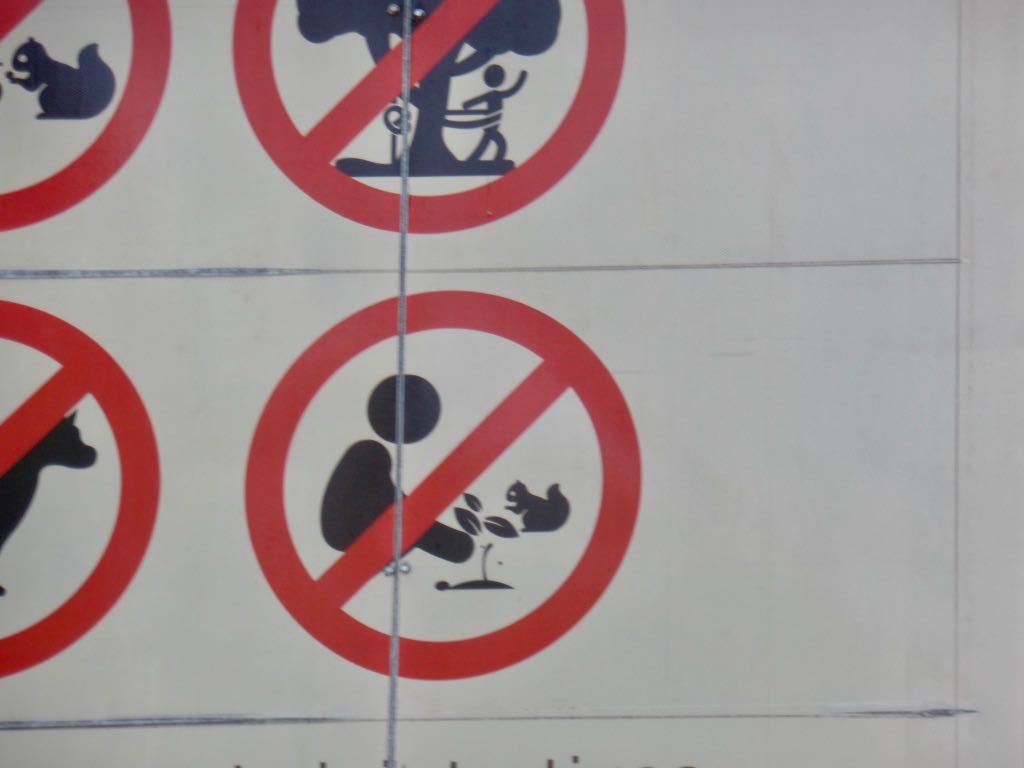 Furthermore, do not trade guitar picks with the squirrels. Also I didn't notice at the time, but do now: above that, the warning to not hook up an elastic band to a tree and use it as one of those hilarious comical weight-loss gadgets you saw in old cartoons and sitcoms where someone gets shaken up a lot and that's supposed to make them thin somehow? You would have thought that one went without saying.