Just looking for a new direction in an old familiar way

bunny_hugger and I had been to Knoebels a couple times before, always on or near the weekend. This, a Tuesday, was our first midweek visit. We knew we'd want to be there at park open, to have the fullest chance to see the park. We also figured we'd have to fight a mob of traffic the last mile to Knoebels. So we set out early, and skipped getting breakfast, trusting we could eat at the park. The plan went well but the traffic was not there. We did, following MWS's satellite navigator, end up at the campground entrance and having to turn around at the southwest corner of the amusement park, at about the only posted signed intersection within the park. But we didn't encounter real traffic. Which, given this is a major park, and it was a gorgeous hot sunny day, was amazing.

It would turn out not to be a busy day, not for how lovely a day it was. Maybe going midweek makes that much of a difference. Or maybe it was hot enough that the locals figured they could go another day. The afternoon was above 90 degrees and while Knoebels is in the woods, pretty well-shaded, it's not that shaded. Certainly I was thirsty much of the day.

Well, we went to the park, buying wristbands and getting our hands stamped. I'd forgotten about the ink stamp (our word for the day was 'HAPPY') as part of the pay-one-price wristband stuff. MWS said he would keep track of the cost of the rides we went on, to see if it did pay out or if we'd have been financially better off buying tickets per ride instead. We did pay out, and by something like ten dollars, thanks in part to a lot of re-riding the last hours of the day. Something we did forget was that the ink would need time to dry, which we each realized as we went to the bathroom right after.

Not knowing that it wouldn't actually be a heavy park day we thought the thing to do was go to Flying Turns. This has to be the most Knoebels ride they have: the re-creation of an obscure kind of roller coaster which nobody had built in eighty years, and the last one of which had been torn down in the 60s. It's a kind of wooden bobsled coaster. Knoebels spent nearly a decade slowly building the thing and getting it to work; it opened about two months after our first visit to the park, in 2013, and we made a trip to the park in 2014 just to ride that. It's now five years old, and there's another, even newer, roller coaster in the park. But it's a roller coaster not so large or intimidating that people would shy away from it. And it has an extremely small capacity: each train can carry between three and six people. Our bet was if anything got a massive line, this would, so better to ride it before too many people were in the park. Our wait was something like twenty minutes, not at all bad, and it would be about the longest we'd wait for anything all day.

The ride carried with it a moment of dread. Any one car, of the three making up the train, can seat up to two people. It cannot carry more than 400 pounds in one car. In 2014,

bunny_hugger and I fit in one car. Since then, I've gained weight. She has too, although less of it. But we've noticed it in things like older clothes fitting less well, and for me, how nice one pants size larger feels. The ride operator, taking people in, asked whether we'd fit together. ``We did last time,'' we said, truthfully. And when was that? ``... 2015,'' I said, getting the year wrong in a way that didn't matter. The ride operator looked skeptical and said they'd see.

The Flying Turns station does not do anything as gauche as show your weight. The loading station has a loose airport-gate theme, and little monitors say whether your flight is on time or not. You step onto pads that weigh you and if the total is more than 400 pounds, the ``flight on time'' screen switches to a ``please see gate agent'' message and you have to split into separate cars.

bunny_hugger and I hoped, and took our cameras and iPods out of our pockets, stowing them on the side to save, what, a pound? Two? And ...

We did not make it.

So we would have to ride in separate cars, and this forced us to take a different train from MWS, and to renew our resolve to diet after Pinburgh. At the least, to have more bagged salad dinner than to have things we can put too much mayonnaise on. We'll see maybe next year if this makes a difference.

MWS professed to like the ride and it's easy to believe him. Flying Turns is not a very large or fast roller coaster, but for most of the course you are rolling free, in a tube but not on a track. And you are often going onto, or nearly onto, your side, so that it has this intensity from moving in strange ways close to the ground. Still, we were always worried that MWS was finding Knoebels disappointing.

bunny_hugger and I love it, certainly, but it is nothing like, say, Walt Disney World, which MWS visits every year or two, or even Cedar Point, which hasn't got a Disney level of thoughtful planning but does have massiveness and newness to it. Knoebels is not small, not really, but it has age and quirkiness and many little bits to it. If you're charmed by the thought of the Looper, a ride in which you and a partner can push a lever together to roll your cage upside-down, you're charmed by Knoebels, which has what might be the last of this model ride in the world. Anyway, he's said, a lot, how much he enjoyed the park and I still worry that he's just being considerate of our feelings.

After Flying Turns we figured to ride the other roller coasters as the highest priority, particularly as MWS hoped to get to his 100th coaster. Phoenix was the next ride. It's another signature Knoebels ride: it used to be at Playland Park in San Antonio, Texas, where it was known as Rocket. It's common enough to move a steel roller coaster. But Rocket/Phoenix is a wooden coaster, and those are almost never moved. It speaks to Knoebels's interest in respecting and preserving amusement park history. ... Who else in northeastern Pennsylvania would care about the roller coaster from a small park in San Antonio?

Also, it's a fantastic ride. One of the rides that's always on or near the top of best-wooden-roller-coaster polls, inclding winning Amusement Today magazine's Golden Ticket award for best wooden roller coaster in 2018. When you consider how survey-based polls like this always weight new rides more, and Phoenix opened at Knoebels since 1985, you know how good this should be. And it is, and MWS was enthusiastic about this we didn't worry he was being considerate of our feelings. It's a great roller coaster, one that other roller coasters try very consciously to imitate. Wolverine Wildcat, at Michigan's Adventure, is nearly a clone of this. None so good, though, and it's still mysterious just why. Wolverine Wildcat seems to run a little slower, and that makes more difference than you would think. Phoenix also runs without seatbelts, just a lap bar, so that you don't just get air time, you can feel it.

After the ride I tried to joke that this had more airtime than Ryan Seacrest has, but at a critical moment couldn't think of the name ``Ryan Seacrest'' and the joke died miserable in the late-July heat. No matter. It's a gorgeous ride and a great one.

We stopped before getting to the next roller coaster, Twister. It was at Knoebels's marquee attraction for 2019, the newest ride, Tumbling Timbers. It's a small flat ride, something obviously kid-friendly. The cars for it are done to look like wooden barrels ripped open. The ride operator was game for letting a couple adults ride it and warned that it gets going really fast, forward and backwards. The motion itself is like a Calypso or Tiki-Twirl or even a Scrambler, seats spinning on an axis that itself spins around another one. But it is on a smaller radius than these other rides, and so it's more intense. Intense enough that all of us were feeling a bit woozy after the ride, possibly from the ride, possibly from the direct sun --- no shade on this new ride --- and heat. The ride operator agreed, it was a scorcher and he at least had shade from his booth. We were going to have to do something.

Trivia: Between 1969 and 1978 there were more than 400 international hijackings, involving over 75,000 passengers. Source: Naked Airport: A Cultural History of the World's Most Revolutionary Structure, Alastair Gordon.

PS: At the playground I found in the Bosque Tlalpan. 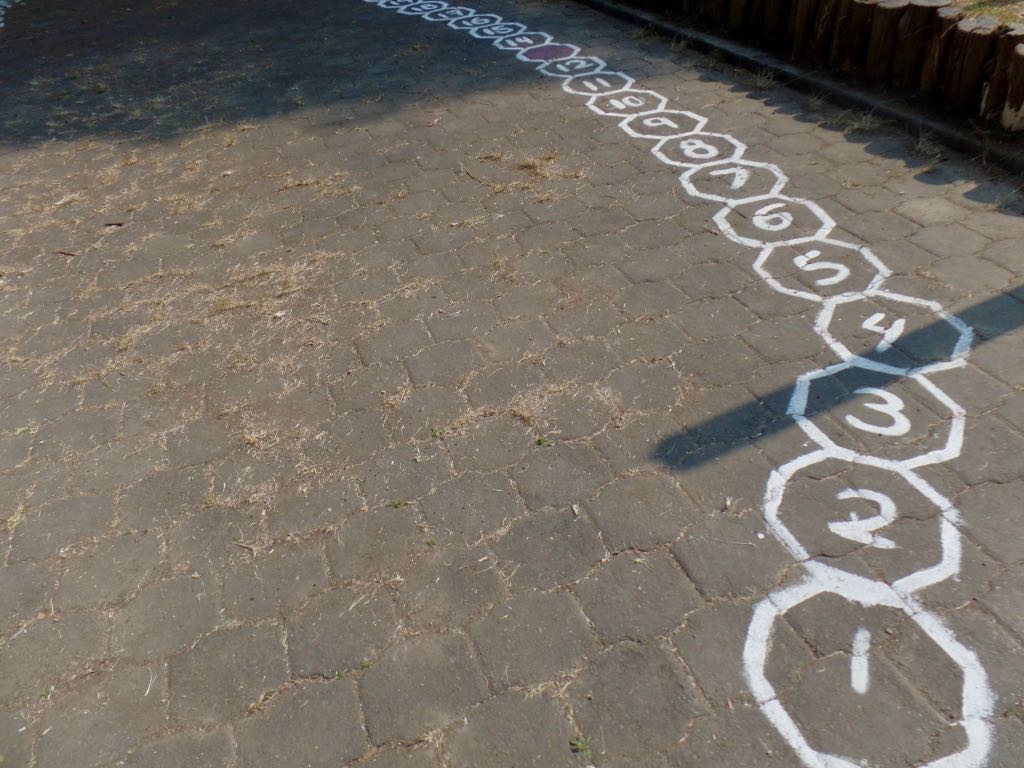 The start of what I trust is the world's longest yet boringest hopscotch board. Note the alternate color for number 13 there. 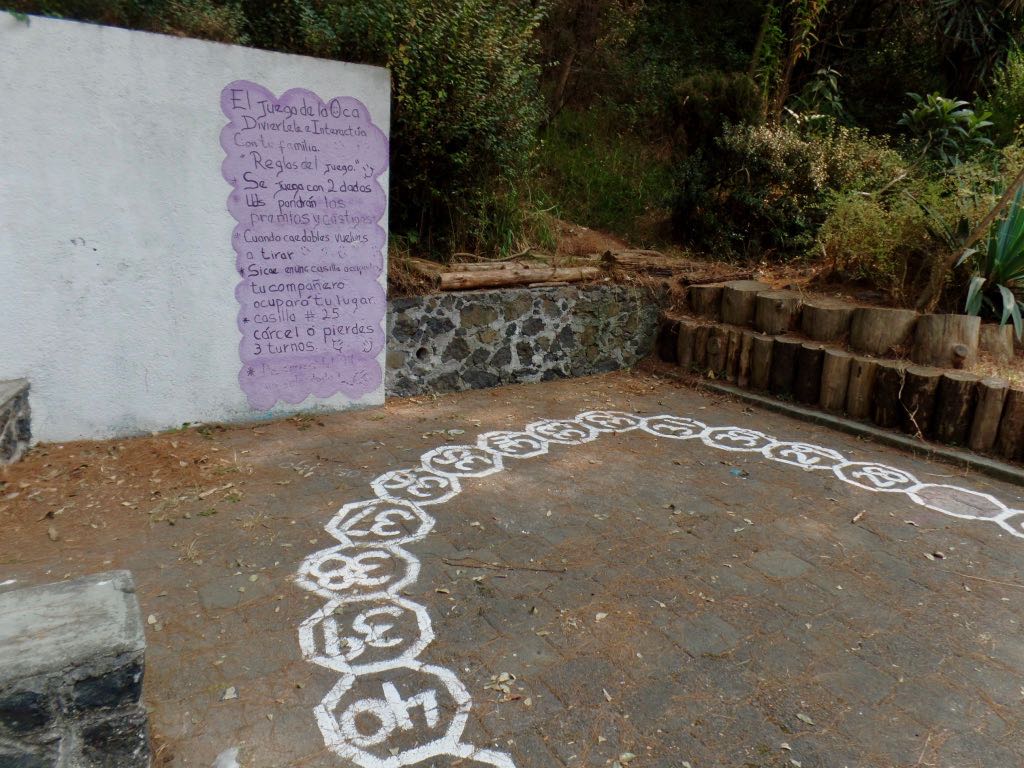 Further along. Sure, the hopping may be dull, but at least there's a lot of it. 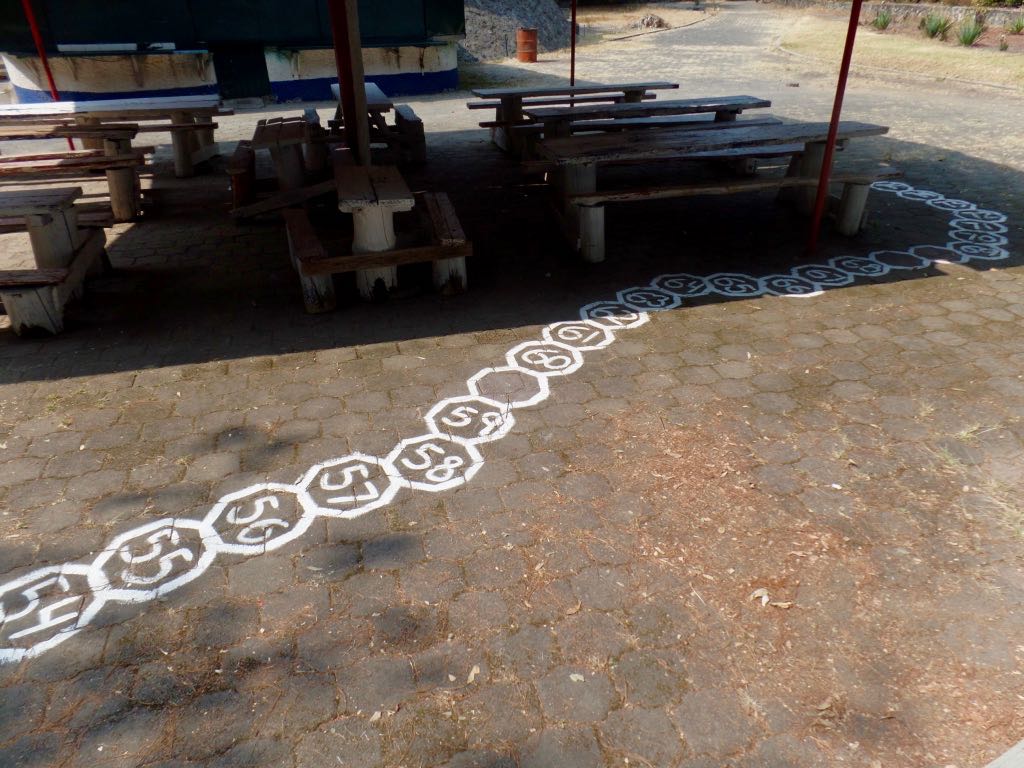 OK, they skipped treads a little between 59 and 60 and between 68 and 69 but still, it's going on a fair while. You get your money's worth from this, is what I'm saying.