The first thing we did after Black Diamond was another ride on Phoenix, no less wonderful. We waited for the back seat this time, not long, considering how sunny and hot it was. After that ... you know, Knoebels has a log flume ride, the Giant Flume. It's your classic 80s style, including two drops and a fair bit of puttering around in the woods.

bunny_hugger examined how wet people on the ride got, and decided this was acceptable. She and I went on it. MWS, less fond of log flumes than we are --- even despite his missing the one chance he'd have to ride Kennywood's Log Jammer --- stayed behind, only to drop a coin in the water cannon as we came around the viewing area.

bunny_hugger got soaked. I didn't get too badly wet.

But as we left the ride we noticed they were not sending out new boats. MWS pointed out how he had spotted one tree branch knocked over by the wind, ready to fall, terribly close to the channel. He pointed that out to ... someone ... and trusted they'd act on that. But the ride closure was because there was a storm front moving in. The weather had forecast a high chance of afternoon showers, but only for about two hours. We had stowed rain gear in the car which was, yes, on the opposite side of the park. But if the rain wasn't too bad we could just go to indoor attractions.

Such as the Cosmotron II, an indoor Himalaya ride whose name seems independent of their mascot Kosmo. The II refers to how the ride had originally been an indoor Caterpillar. It was converted from the near-extinct ride to the common-style one in a 1998 renovation. The ride came from West View Park, in Pittsburgh, the amusement park finally knocked out of business when Kennywood put together a major expansion in the mid-70s. The centerpiece of that expansion was the Log Jammer. You see how much of everything Knoebels is.

When we got out of this ride the light rain had become a heavy rain. We huddled for a brief while under some trees. Then joined a small crowd hiding from the intense rains under the overhang of a nearby building.

bunny_hugger bravely went around the edge to see if there were anywhere to run there. There was not. We would brave it, running through the monsoon to a food stand, and on their advice, over to a games stand with much more overhang space. I checked the map and figured our best route to the Fascination parlor.

MWS played Fascination all the time until Cedar Point removed their parlor in the early 2000s.

bunny_hugger and I discovered the game on our first-anniversary trip to Wildwood in 2013, and discovered it at Knoebels in 2014. I'm confident some of MWS's interest in the park was the chance to play Fascination again. Which, thanks in part to the rain, had a good dozen and a half people playing. We would spend something like a half hour and at least ten bucks each at fifty cents a throw,

bunny_hugger winning five tickets and MWS four, three of which he would trade in for a little bag of vending-machine cookies and one that he kept as souvenir.

This all gave the rain time to lessen, to a mere steady drizzle. We went to a drinks stand and found the white birch beer soda, as hoped for, and stayed under cover while the rain finally petered out.

Then we visited the Haunted Mansion, the ride-through dark ride and the only ride not part of the pay-one-price wristband plan. (This kind of attraction tends to insist on paid admission so as to deter bored people riding enough to know what they can vandalize and how.) This was great and MWS admitted at least one stunt took him by surprise for all that he knew logically it must be coming and soon.

Now it was my turn to take out the increasingly soggy and sad-looking park map to find the Stein and Goldstein carousel. This is the older, and smaller, of Knoebels's carousels. It's been at Knoebels less long, but more times: the National Carousel Association census says the park had it from 1948 to 1950, and then it spent a quarter-century at other Pennsylvania parks before returning in 1976. The carousel has only an inner and an outer row of horses, and no brass ring game. It has got its own band organ, though, and scenery panels depicting the local settings. The Grand Carousel has panels showing off comic scenes with witty titles like a man being spanked under the title 'Collecting His Rent', a nervous-looking man sheepishly entering his apartment at five minutes to four while an angry woman looks on, titled 'Good Morning', or a panel showing a woman playing baseball labelled 'In The Future'. I take it these are carefully restored from a distant past origin.

Incidentally that origin-story for Dexter Raccoon has him part of the team that repaired and repainted the Stein and Goldstein carousel after the 2011 flood, although you can't really tell what parts a raccoon painted.

Next to this carousel is, as the sign says, the Frick Steam Tractor, and a panel about the Knoebel Sawmill. This is all marked 'Retired', though, although there's still the remains of a wood shop there and it's not like long-abandoned remains or anything.

Here we went to the Carousel Shop, which includes a museum to the carousels, and things like the bill of sale for the Grand Carousel. It also has the remnants of Knoebels' first carousel, which they'd acquired in 1926 when the campground started getting rides. They sold it in 1941, and the carousel itself was destroyed by Hurricane Diane in 1955. Two horses survived and they display one of them in the museum. As I say, it's a legitimate if small museum.

Here's where we did our main souvenir-shopping, too, taking a quick trip after this back to the car now that our rain gear wouldn't be useful. Along our way out we took a ride on the Roto-Jet, one of the uncovered rides coming back into operation finally. This is an old ride, one that's fading away from parks. You the rider get to control whether you fly high, or low, or in-between on its posts and a dive is great; it just takes a car a long while to rise again on its pneumatic arms.

We didn't take our rain gear from the car. That was hardly needed. We might have gotten slightly warmer clothes, if we'd brought them though. The storm had blown away the intense heat and now it was ... just a little chilly. And muggy, in that way. This did not make the park any more crowded, though. Maybe the great heat kept the afternoon crowds from being too big. Maybe the storm and the sudden cool kept the evening crowds from being too big. We had the park experience you hope for, when you only have the one day to allocate to a park, one without many or long lines.

We had about two hours left in the park day. So we went for what we most wanted to do again, particularly another turn on the Grand Carousel, with

bunny_hugger riding the lead horse, the well-armored one that you see on, like, carousel jigsaw puzzles. A stop for an Old Mill Sundae, having possibly more ice cream than was wise, which we sat down next to the old-mill-mechanism that makes rotate the roofs of several picnic pavilions. Another ride on the Black Diamond, which MWS liked better this time. And ...

MWS had looked at the Super Round-Up with that eye of a person who's worried this would make him motion sick. He'd taken meclazine, as had

bunny_hugger, but still. The Super Round-Up was my one most favorite ride of all time, as a kid, at Great Adventure, but I could accept my companions not wanting to ride it. MWS asked several questions about what its ride motion was like, though, and just how bad it might be. The Super Round-Up just spins, and you feel yourself pressed into the gym-mat-style backing. Then the spinning platform rises up so that it's spinning at maybe a 45 degree incline to the ground. Then it slowly lowers and comes to a stop. MWS decided to risk it, and I was delighted for the chance. And that's how we got a twilight ride on the Super Round-Up and MWS found it pretty enjoyable.

And then on to more night rides on roller coasters: Phoenix with its beautiful atom-symbol crown on the top of the first hill and Twister and then a stop at a shooting gallery. Flying Turns again, which had a shorter line than the morning, and which we knew and accepted we'd have to ride in separate cars. And, to close the night, Impulse, getting to finally see the ride without the vertical lift hill making us stare into the sun. .... And, since the queue had not quite closed, a re-ride on Impulse, taking one more chance to appreciate the color-shifting-LEDs imitating neon lights of the station. And ... ooh. It had passed 10 pm, but they hadn't closed the queue yet. Knoebels does a soft closing, each ride taking its last passengers when some spirit moves them. We could get another ride in ... but, no, that seemed like a bit too much for us all. Impulse is a fun ride, but it's a bit of an intense one and without any wait time to speak of between rides? That's a bit much.

We did a last little bit of shopping; I kept thinking I might see a T-shirt that I liked. For as much as I like Knoebels (and Kennywood) I haven't got a ride shirt from either. I did get Cosmo and Dexter miniature plushes, though, and they've joined the mass of amusement park plush overflowing the display table in our dining room.

We never did get a real proper dinner at Knoebels; we went for Sundaes instead of, say, pierogies. So we stopped at the Taco Bell near our hotel and got just enough to not feel like we hadn't had any actual food, and went to our respective hotel rooms to sleep surprisingly early and soundly.

PS: I reveal what it was I saw in that picnic area at the Bosque Tlalpan. Ah, there we are. Look dead center and then down about one-fourth of the way, on top of the wall. There's a little vertical streak in the rocks underneath it. It's a local reptile of some kind. I'm going to say a skink because that name sounds right. It hung around a while before deciding whatever my deal was, it didn't need it, and it vanished somewhere into the wall. 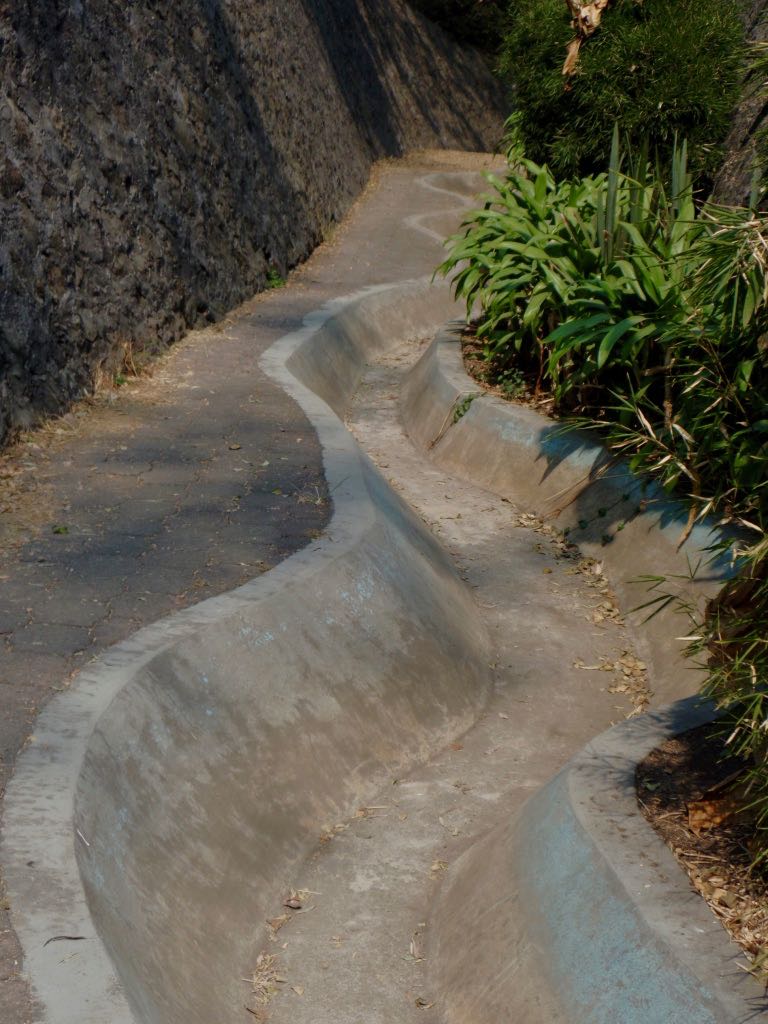 A small channel running beside the wall. I interpreted this as something to carry rainwater away, although it's given enough twists and turns and varied levels to make it interesting and I wonder if it's an imitation of a creek path or something that locals would recognize. 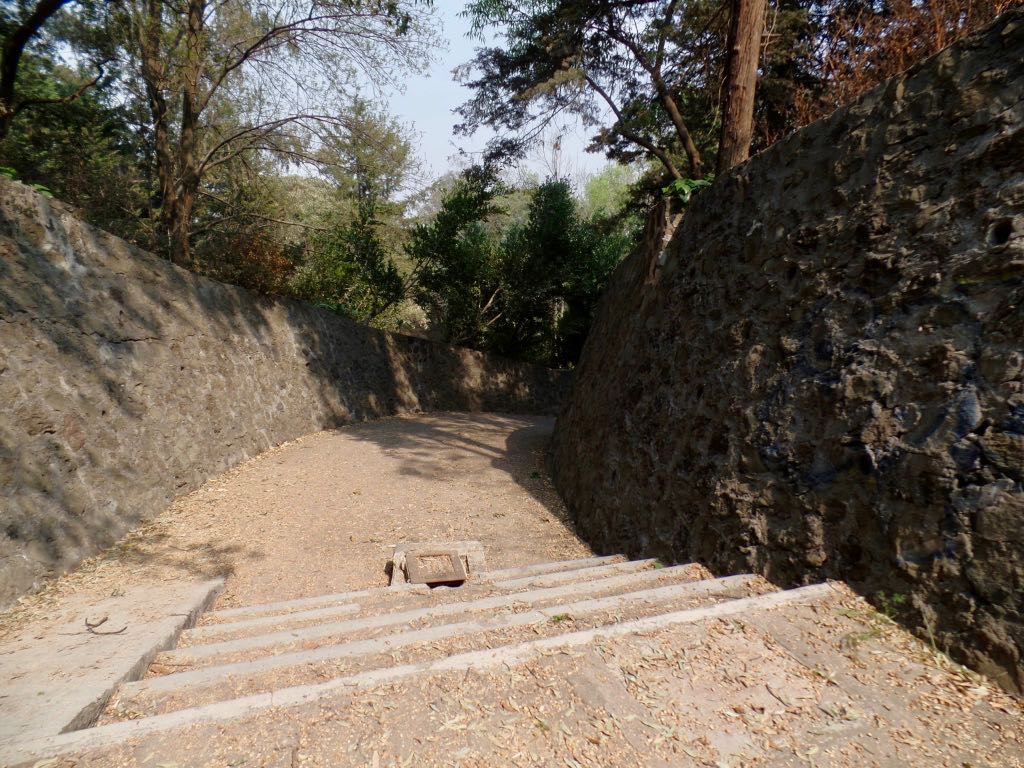 And an exit from the picnic area back to the main pathways.