Check-out at the Red Roof Inn was noon or so. We had to be in Pittsburgh to check in for Pinburgh by 10 pm Wednesday. We got some food at the gas station near our hotel and then got on the road. Knoebels is not near Pittsburgh, but it's only a roughly four-hour drive, and ... there was something to break up the trip. Two somethings. Two somethings with two roller coasters each.

The first, as we journeyed, was DelGrosso's Amusement Park, in Tipton, a town just outside Altoona. Just as featured repeatedly in Bill Bettwy's Take It From The Tinkersons, one of those comic strips it seems like I have to somehow be making up. It's another Pennsylvania free-admission park, where you can buy a wristband for unlimited rides or buy tickets per ride. Also pay nothing for parking. This was

bunny_hugger's and my first time there since our 2013 Pennsylvania Parks Tour. This was also our first time since a 2015(?) renovation expanded the water park and changed the layout of the entrance, across the road from the main part of the park, which made us worse than useless in offering parking advice. Well, the lot was free anyway.

We'd barely got there when we had a dilemma: the park's Starlite admission, pay-one-price at a lower rate, started at 4 pm, barely 90 minutes from then. We did have something else we might do ... but it would involve putting in some backtracking to our trip. We debated a while whether this would make sense anyway and finally concluded that we'd have to ride a lot of things to make even the Starlite admission make sense. And given when we would have to leave in order to make it to Pittsburg before 10 pm? Ideally, before 9 pm so we weren't crushed? This would be unlikely. So we walked the pedestrian footbridge, over the vast water park, and bought tickets for the rides we figured we would take.

Which were two kinds of things. The roller coasters, of course. The antique carousel. DelGrosso's has a 1924 Spillman carousel. And --- this might be unique, and it's so wondrous you'd think it something about Knoebels --- they were the first owners. This is one of the few, possibly only, antique carousels still at its first home.

It's not that the park hasn't got more rides.

bunny_hugger and I could certainly make a half-day of it. Possibly a full day. But we were stopping in to see the place on the way between other things.

So our first ride was their small roller coaster, a Wacky Worm, a small, knee-banging roller coaster much like the Max's Doggy Dog Coaster at Fantasy Island, which we'd ridden a month and a half earlier. There's also one at Gillian's Wonderland Pier, which we'd visited in 2017. You get two loops on it and that's, you know? That's enough. MWS got his 97th roller coaster credit here.

Then on to their bigger roller coaster, the Crazy Mouse. This is a spinning wild mouse coaster, the same ride as the Raton Loco at La Feria, and the Crazy Mouse at Fantasy Island. Also the same ride as the Exterminator at Kennywood, a thing that MWS could not believe. The Exterminator is indoors, and interacts with the functioning subset of the ride animatronics and special effects, which makes it seem different. We started over there and ... oh. The ride was stopped. There were cars --- a wild mouse roller coaster has individual cars, not trains --- at several points on the track just sitting there. There were mechanic-type people walking around looking at things. The queue was dispersing. We had to just hope the ride would resume.

So we went to the carousel instead, and got a ride on that. It's a nice modest one, three rows of horses, with the scenery panels depicting wildlife and sure looking like some of them are about fairy tales. They don't have the brass ring game. They do have a ``circa 1924'' Wurlitzer 146B band organ, though.

After our ride the Crazy Mouse was running again, so we hurried over before anything went wrong. Despite the comic strip's rendition, the car doesn't spin as you go up the lift hill. Different instances of this ride start the spinning at different points; the one at DelGrosso's waits for about the last third of the ride to release the mechanism that makes this spin. The roller coaster also gives us the best view of the DelGrosso's factory, which makes spaghetti sauce and other foods, and which family owns the amusement park. (They've owned it since 1947, but for unknown reasons kept the original name --- Bland's, for the family that first owned the place --- until this century.) With this, MWS logged his 98th roller coaster. And we had a nice brief chat with some of the operators about the park.

This covered the most important things we went to the park for. We did want to do a bit more, to enjoy some of the park's local flavor. We got a ride on the Tipton Creek Railroad, their miniature train, which putters around mostly in the woods but does go back behind the Crazy Mouse too. I also noticed the historical marker, the Original Site of Logan Valley Presbyterian Church, 1845 AD, which space is now a Dippin' Dots ice cream and the Crazy Mouse. We thought about riding their Trabant, which has a roulette-wheel-themed design, but we never saw an operator at the ride. I speculated they were sharing an operator with the Super Round Up next to it.

We took a second ride on the carousel, and then the three of us went to the bumper cars. Better, there was a nearly full set of riders, so that we could have an exciting time of it. Yes,

bunny_hugger slammed against me a couple times, but I was doing pretty well with my objective of cruising with enough sudden changes of speed and direction to confuse everyone. And then

bunny_hugger and I rode the Crazy Mouse again. MWS refrained, and I'm not sure why, except that perhaps he'd felt the ride too nauseating (he gets motion sick) for the fun it is.

Besides some snacks when we set out we hadn't eaten, which will make one more prone to motion sickness. (The stereotype about throwing up on a ride after you've eaten is, in our experience, completely backwards. At least if we're talking about normal meals.) Happily, DelGrosso's is a really good food park. If you visit, get the potato salad. We went to one stand to get a pound of potato salad, splitting between me and

bunny_hugger, and her worries that this was too much for us melted in the face of our actually eating the whole thing. We also got some pizza, yes, just like in that comic strip. And then we went back to the water park area, as MWS had gone there to get, I think it was, a cheesesteak. Here

bunny_hugger started to curse herself because we hadn't gone to the rides park's gift shop to see if they had anything good, particularly Christmas ornaments. The water park gift shop, on that side, had stuff, but no good ornaments or, for me, T-shirts. They also had spaghetti sauce that I thought seriously about getting as DelGrosso's sauces don't make it to mid-Michigan.

bunny_hugger didn't think we had time to go back across the road again, to the rides park gift shop. Really we needed to get back on the road. So we waved goodbye to an Altoona-area amusement park that's had a very good decade, and drove in the direction of Pittsburgh.

PS: And I leave the Bosque Tlalpan and its museum. Close of the Monday in Mexico City. 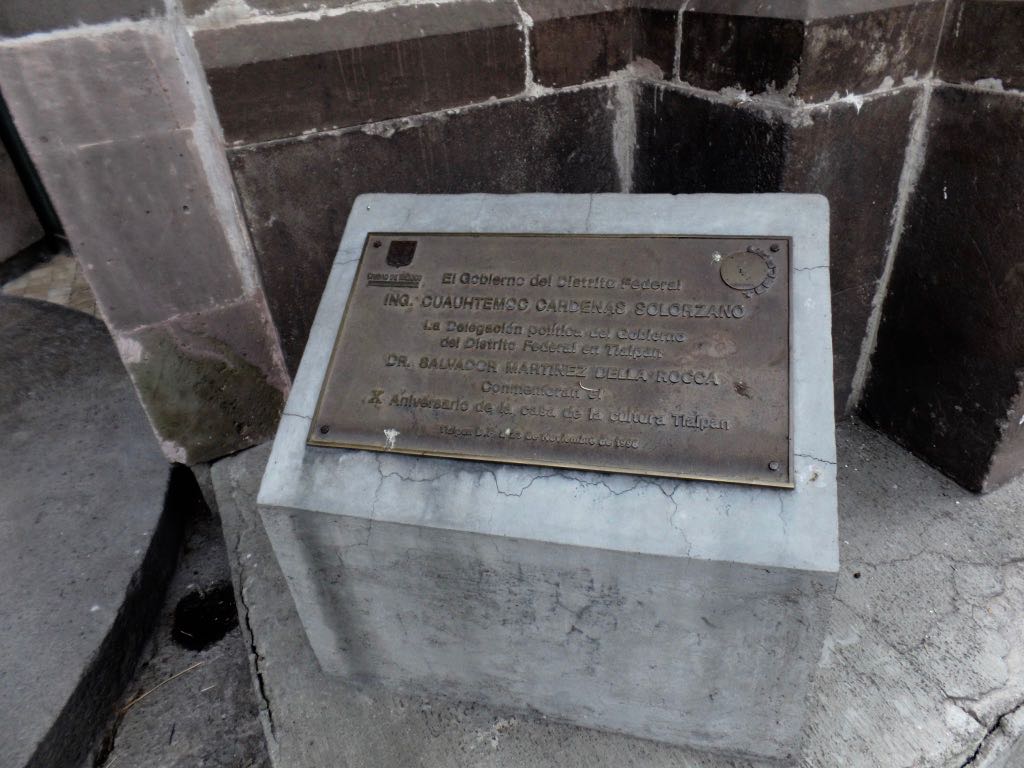 Sign outside the museum explaining its origin and purpose. 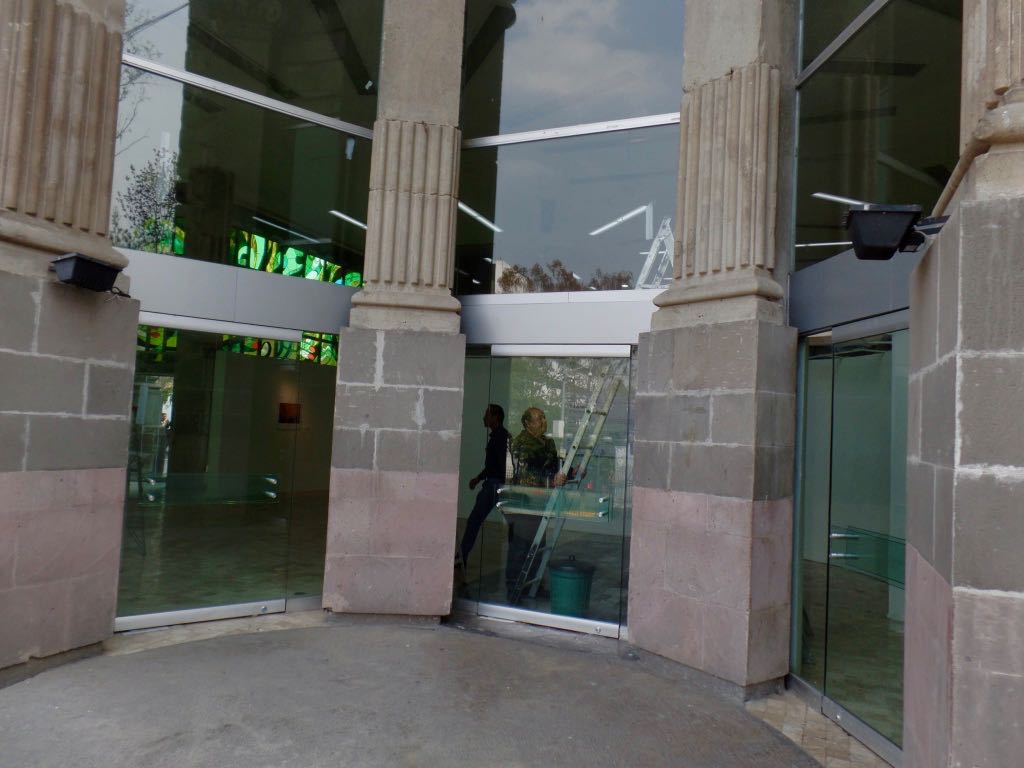 Some kind of maintenance work being done just behind the front door to the museum. 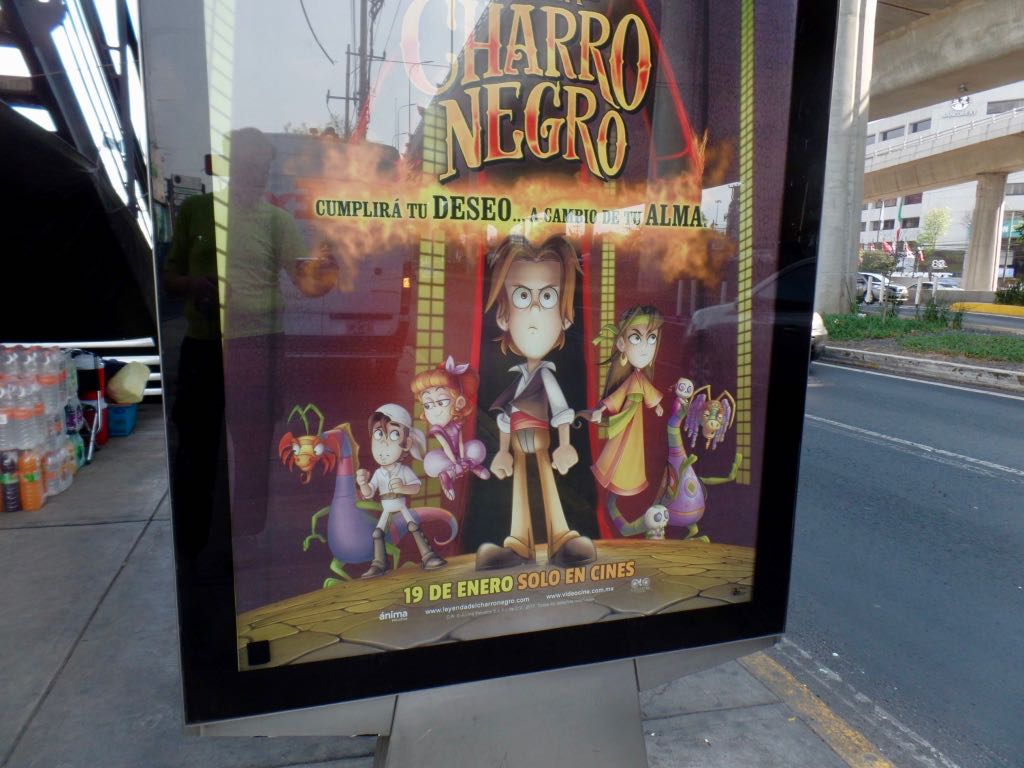 Movie poster for yet another animated film we saw advertised there, and which we didn't know anything about. But I like the dragon-y phoenix-ish creatures on the outsides there. And I'm curious about the floating women, although not quite curious enough to go looking the movie up.