When we last visited Altoona, Pennsylvania, it was to visit two area parks. Tipton, yes. But in the actual heart of Altoona? Lakemont Park, an even older amusement park, one with Leap The Dips, the world's oldest standing roller coaster. The last remaining side-friction coaster, the kind of coaster that predates the 1920 invention of upstop wheels that make it impossible for a car to fly off the tracks. (The side-friction is channels which return a car quickly to the tracks if it leaps off on a dip.) It'd be absurd to visit DelGrosso's and not visit this park, twenty minutes closer to Pittsburgh, with such a noteworthy roller coaster.

When we last visited Lakemont, the park was sleepy, small but puttering on all right Four roller coasters, one of them a kiddie coaster, and maybe a dozen and a half flat rides. The bumper cars was where

bunny_hugger and I had our first, and to date only, emergency-stopped ride (a child began crying, to the point of panic). A pleasant day, especially given the $5 pay-one-price admission.

The park did not open in 2017. Nor in 2018. We weren't sure it would open in 2019. Arguably it hasn't. Where DelGrosso's has had a grand decade of growth and expansion, Lakemont has had a crushing one. The park has had an extinction event, management selling off nearly all the adult rides --- three of the roller coasters and an antique car ride survive --- and replacing much of the landscape with miniature golf courses and basketball courts and the like. They've shifted to being more a family entertainment center, with only a handful of rides and none of the other stuff that makes an amusement park.

It's a sad state, by our lights. It's hard to argue that Lakemont Park isn't just gone, the way Tuscorah Park in New Philadelphia, Ohio, is simply a city park with some rides. The land is owned by Altoona, and there's a covenant that it has to serve public amusement, but covenants are flexible things right up to the point they can be broken. Leap the Dips seems likely to stay reasonably safe --- it's on the historic-landmark registry --- but that, too, could become a museum piece instead of a real amusement.

But what's left? That would interest us? Well, the antique-car ride. Skyliner, a wooden roller coaster relocated from Roseland Park, in Canandaigua, New York, back when Boyer Candy briefly owned Lakemont in the 1980s. (Canandaigua, in the Finger Lakes, is near Seabreeze and Darien Lake and other parks we visited in June.) Leap the Dips. Maybe the miniature golf. We'd want to see these at least. MWS would want to get his roller coaster credits. Skyliner could be his 99th and --- oh, well. MWS doubts he'll ever have another roller coaster milestone, a 150th or 200th or 250th ride; he just can't travel like we do. To have his lone milestone coaster be on the oldest roller coaster in the world? That would be sweet.

It also couldn't be. While Lakemont has opened, if you call it open, Leap the Dips still has not. The park keeps insisting they're working on getting it open, but it wasn't and there was nothing to do about that. We did tell the ticket-takers, you know, if you just let us we'd push the train car up to the top of the hill, and they chuckled, as if every roller coaster fanatic hasn't told them the same joke dozens of times this summer.

The Leap the Dips station was out there, in the open, not roped off or anything. There was just the ladder leaning against its tallest level, with the wood structure partly painted. We could go up to the track and even touch it, or touch either of the cars set beside the track. We refrained from actually sitting in them, since we don't want to make life that hard for the staff. But, you know, we looked and we thought about it.

And that was our looking, longing, at things that might be. We did some looking at things that used to be --- pointing out, for example, the building that used to be the arcade where we found a Star Trek: The Next Generation and an Iron Man pinball game. Or roughly the locations where, before there were tennis courts and miniature golf, there had been a Toboggan roller coaster (sold, possibly scrapped). We bought tickets, for a couple of Skyliner rides and a miniature golf round.

Skyliner was also diminished from what it had been. This was not the fault of the park's extinction-level event. It was instead the fault of an accident at Idlewild Park, in Ligonier, about an hour east of Pittsburgh. On Rollo Coaster, a 1937-built roller coaster, an adult rode on the inside, with the kid on the outside, and the kid fell out of the train on one of its turns. This prompted an inquiry into park safety and nearly every Pennsylvania park has added seat belts to its rides. Rollo Coaster had no seat belts, nor even a restraining bar to lock down; just a bar to grab on. The ride is not so violent that this should be dangerous, if someone who's too big to slide out of the one open door slot isn't seated right next to it. But to explain that a seat belt really isn't needed for most wooden roller coasters? Especially classic older ones? Knoebels is confident in this and willing to maintain the point. Other parks? Not so much.

So Skyliner had new seat belts, which the ride operators seemed resigned to making us wear. MWS and

bunny_hugger sat in the front row. I sat in the second and only as the train left the station realized I could have taken the back seat. It's as well that I didn't. As we left the station I spotted a wild cottontail rabbit, grazing by the fence between the park and the Altoona Curves' minor-league baseball stadium, and could bring their attention to a rabbit who'd gone off hiding by the time our ride was finished. Also the ride was a bit rough and it might have been too much in the back seat, which is typically the roughest ride on a train. Skyliner is a great ride for air time, and the seat belts cut some of that down ... but, they can't defeat the ride, especially since my sense is the ride operators don't take them seriously. It is a wonderful roller coaster and if it's running rough, well, it's amazing Lakemont can make it run at all, these days. And so MWS logged his 99th roller coaster.

We didn't go on the Antique Cars ride; we like these kinds of rides but it's just not that important to us. We did look at the Little Leaper, a standard-model Allan Herschell Little Dipper kiddie coaster. It'd be a silly 100th for MWS, but he did look over at a group of people just leaving the ride. He thought they might have been adults. At least teenagers. After a while we was convinced they were kids. He did eventually ask the ticket-taker, just to be sure, that this was for kids only.

bunny_hugger doesn't remember for certain whether they told him there was a weight limit or a height limit.

The park has got, now, two miniature golf courses. One of them occupies the space that used to be a half-dozen rides. We had our choice and went for what's clearly the more juvenile of them. The more mature and probably challenging course just looked standard. The other course --- well, it's named Rabbit Hole Mini Golf. Each hole has a name, something like ``Raccoon in the Corn''. The holes have obstacles made up to look like Pennsylvania fauna and flora, and each hole comes with a plaque explaining some aspect of Pennsylvania wildlife. How could we resist? Most of the holes are pretty fun, too. The plaques may be debated --- it's nice to hear ``the Eastern raccoon is one of our most intelligent wildlife species'', but after all, there's no meaningful way to compare intelligence between species.

Many of the holes are great fun. There was one wild moment, a fishing-theme hole, on which MWS hit his ball not hard enough to get up the steep ramp (to the boat). His second try, his ball went missing and he supposed it got stuck in the ramp mechanism. I peeked into the hole, to find the ball had landed there in a belated hole-in-one, and accused MWS of humblebragging. He swears he had no idea. Later,

bunny_hugger, who had a lousy round, did get her ball stuck in the ramp mechanism.

Some of the props were simple plywood boards clamped to stand vertically. This seemed like an invitation to vandalism. Already the fisherman's pole had been broken off, and this for an attraction that just opened earlier this summer. Another hole, the catfish hole, had one fin on the catfish broken off, turning what would be the intended and very hard shot --- through the fish's mouth --- into a mere choice and the one you should avoid taking. So the plywood stuff seems like a curious design choice. Maybe it's economical, or more easily repaired than something more solid would be.

We played the last few holes quickly. It was getting on 7 pm, which we figured was when we would have to finish, take our last ride on Skyliner, and head for Pittsburgh. It's hard for me and

bunny_hugger to play swiftly, but we did. The last hole --- the 18th, rather than a 19th --- had one of those holes that's supposed to always drain no matter what you hit, and MWS's ball failed to drain. He had to reach through the fence and nudge it.

I rode in the front seat for our second and final Skyliner ride, no less wonderful even if we didn't see any rabbits around. And, while MWS was in the bathroom, I dashed over to get some more snaps of Leap the Dips from the other side. We would leave too soon to photograph it in the best twilight light, but we were there at all, and that's something.

Currently Reading: Greater Gotham: A History of New York City from 1898 to 1919, Mike Wallace. I know it seems like I've been reading this forever, and I have, but it's like 1100 pages and I'm finally more than halfway through!

PS: So now the final full day, one that I spent mostly at the UNAM campus with

bunny_hugger, whose talk --- the reason we were in Mexico City at all --- was that day. 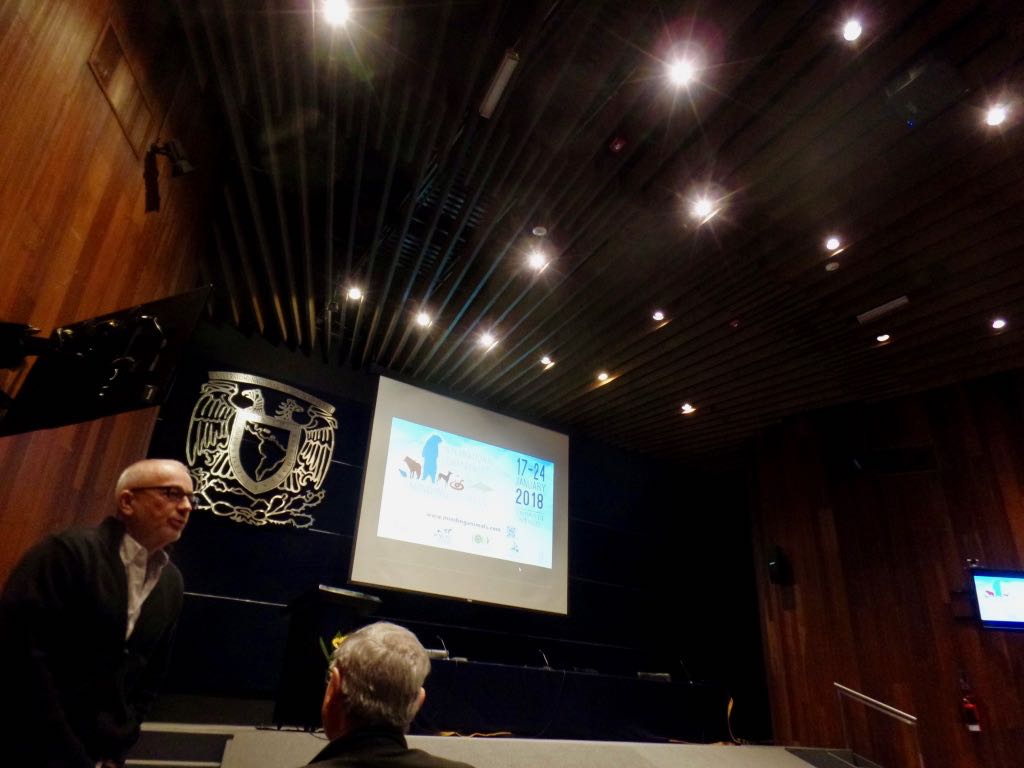 Lecture hall getting ready for the keystone address (not

bunny_hugger's) that day. You can see how academia in Latin America looks completely different to what you get in the United States. 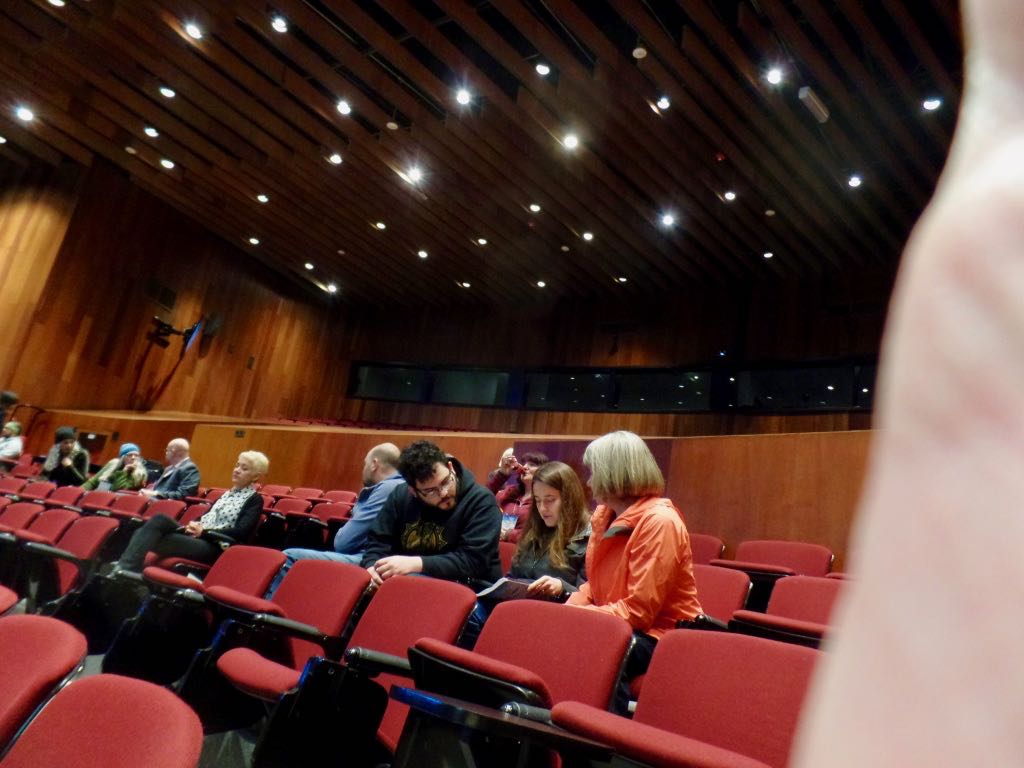 Quick glimpse back; people were still getting organized and filing into the lecture hall. 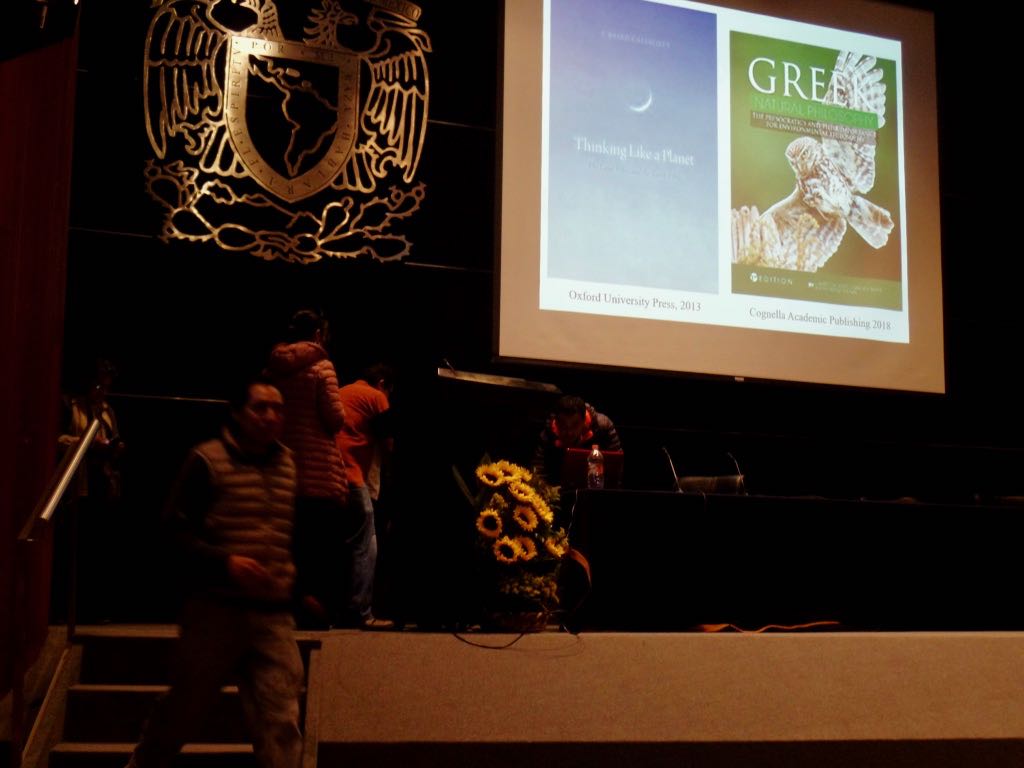 One speaker had to address the crowd over the Internet and so we had the traditional several minutes of people trying to get the tech to work.